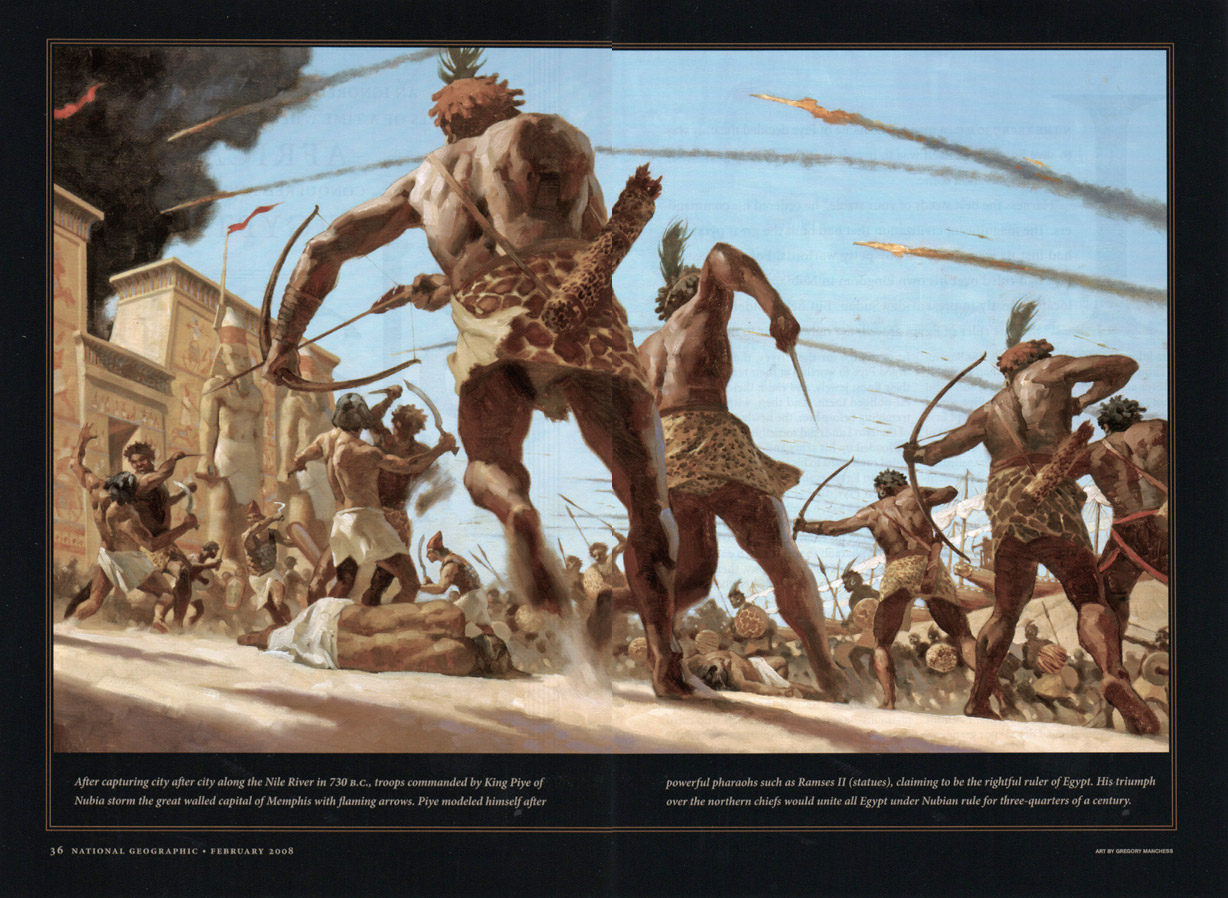 I love working with the National Geographic Society. It tests all of my skills and much of my patience when I work with them, but I can think of no place better to stir my interests as a visual story-teller. That’s what NGS does with their articles about historical times and places: they tell stories about the people that lived there.
I consider it my job to get the reader to be just as excited about the article as the researchers and scientists are about the history they love to talk about. How does someone go about that? While the scientists are thrilled about somebody’s body armor, I’m tasked with the job of putting that armor in context…with excitement.
Years ago, much of the work in NGS reported mostly about what they found. It took great effort to connect those objects with the people that used them. But it focused so much on the objects that the scene itself was left to suffer. When the art director, Jeff Osborn, called me about doing this article entitled, The Black Pharaohs I asked him up front if I could work on finding an exciting pov first, then add the details that the researchers love back into the scene. He wasn’t sure what I meant, but he gave me the go-ahead.
After all, I was going to do a bazillion thumbnails for him to show him what I meant before going ahead with the process of completing the painting. A process that for NGS could take a year and a half. But he informed me that we needed to fast-track this particular assignment, which meant, I had three months.
I was asked to paint three pieces for the story. I’ll skip to the important parts and take you through the first painting, a battle scene at Memphis. The Nubians attacked from the berm along the waterway to the entrance to Memphis, using fire arrows and a surprise attack. Only this time, the shock and awe worked.
I worked up a number of thumbnails, searching for the right point of view to include the entire list of what they wanted to show: Nubian ships pulled up to a large earth berm, the Memphis entrance gate, Nubian soldiers conquering Egyptian soldiers, what they wore, what they carried, how they advanced, burning the city.
I had been looking for something intriguing to put in front of the gate from the beginning, something that said, “Egyptians Live Here” immediately. A statue? Nope, the researchers assured me there were no large statues. Dang. 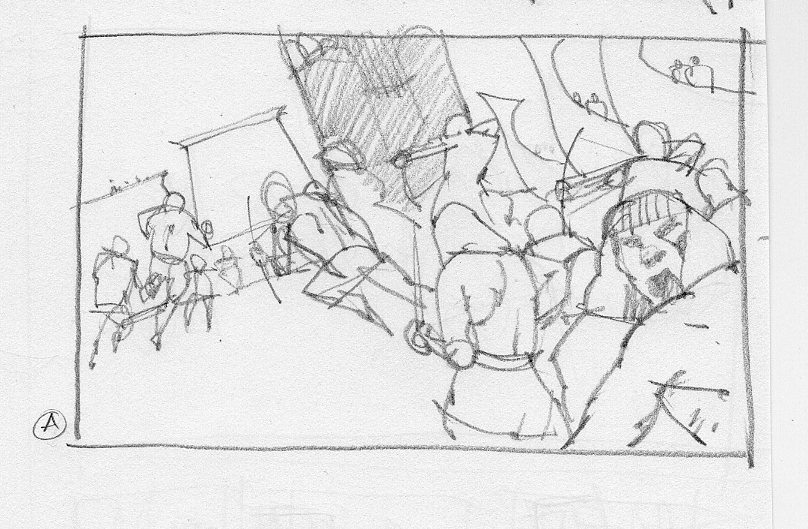 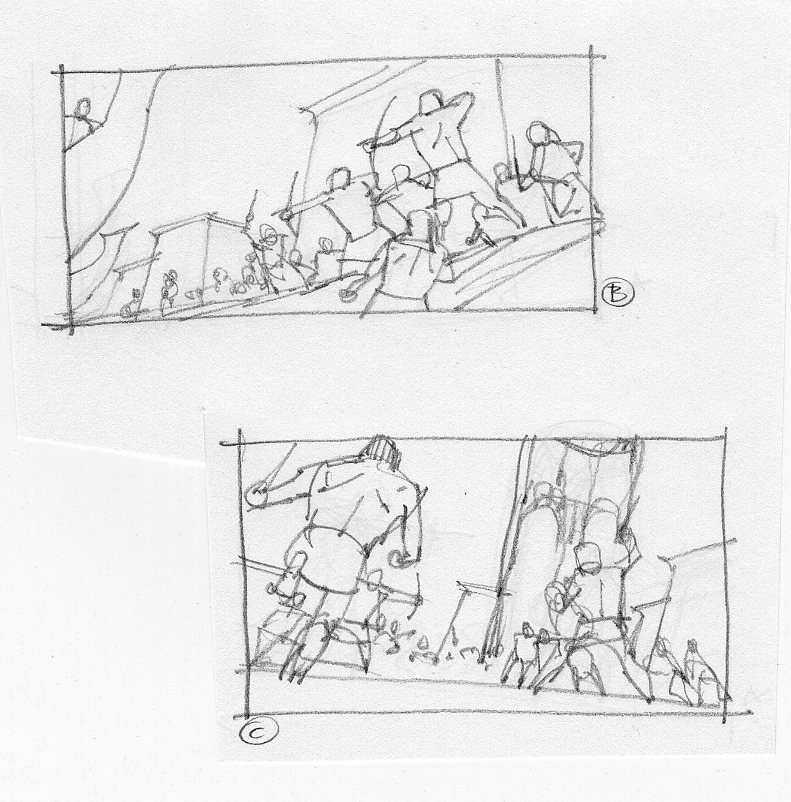 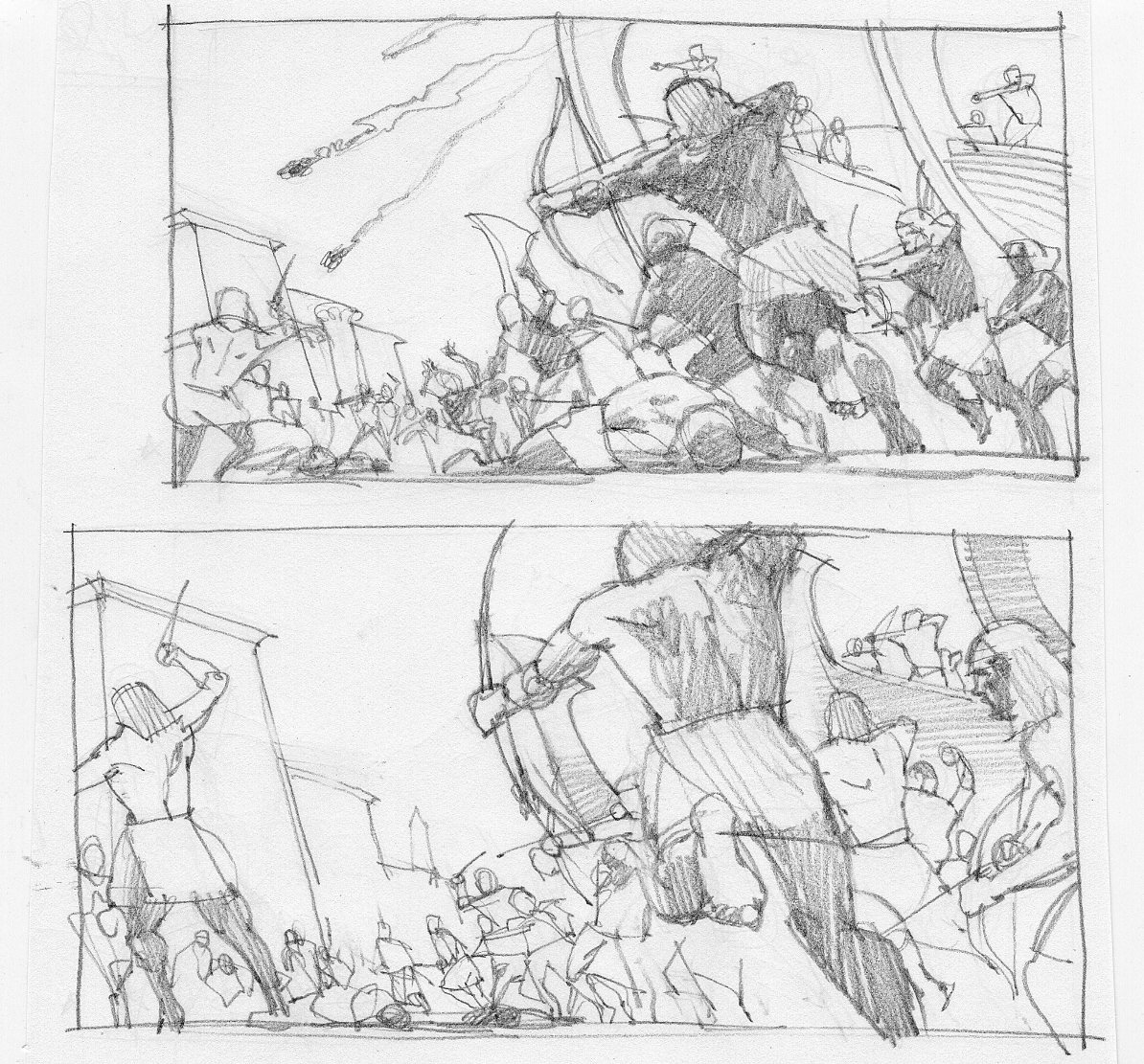 I decided that I wanted to show the pov of a fallen Egyptian soldier, watching his city be overrun. It could actually be a Nubian fighter, too, watching his comrades conquer the Egyptians, but that’s what I find intriguing: it’s up to the viewer.

Jeff liked it and, after hours of research, helped by researchers at NGS, he asked me to pursue it to a finished pencil. NGS always wants to see a color comp, and this time I took a bit of a digital stab at it. (I got half way before I realized I’d had enough. But they saw enough of where I was going.) 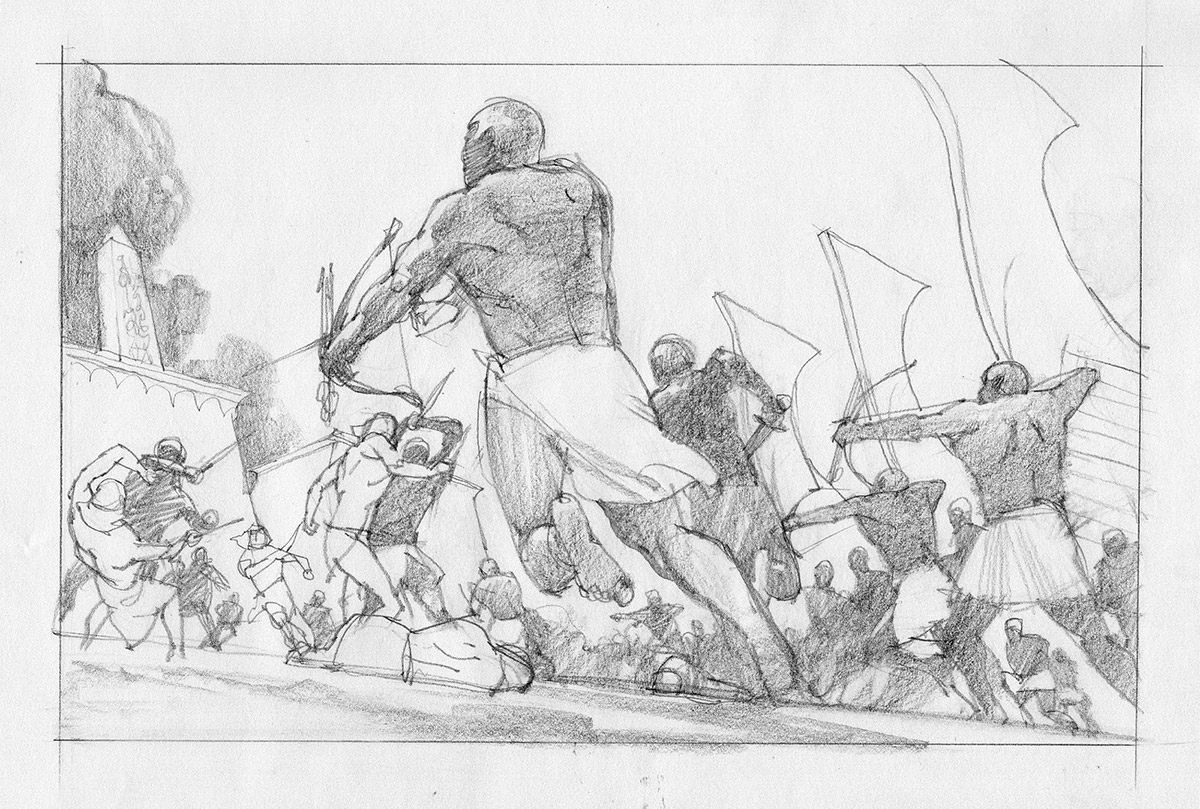 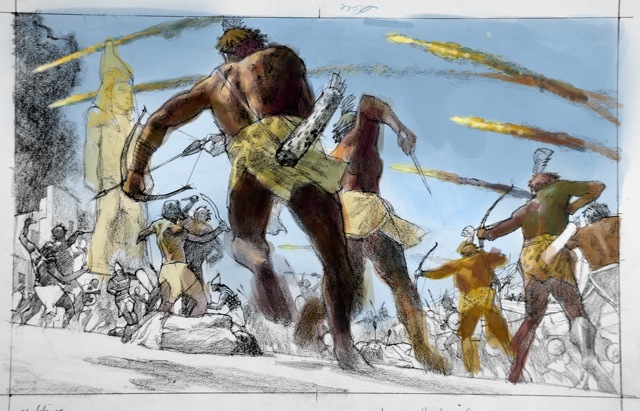 Now the researchers really took it apart, a piece at a time. This is where I’ve learned great patience. Let’s just look at one aspect: the Memphis gate. And oh, by the way, the researchers said, yes indeed, there was a huge statue in front of the gate. Yay! They sent me this….wow! Look at the size of that baby. 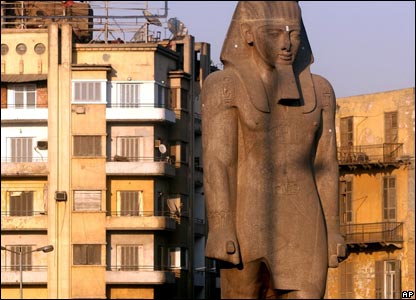 For a while, my gate was too large. Then too small. The sketches below show how I changed all the aspects of the gate, but instead of redrawing the pencil every time, I just drew over it with tracing paper.
Then I got the word: wait, there wasn’t just one statue, but two. Even better. And flags.
Hold on. We were wrong about the statue. The shot we sent was
a telephoto shot. It’s more like this; actually about this big: 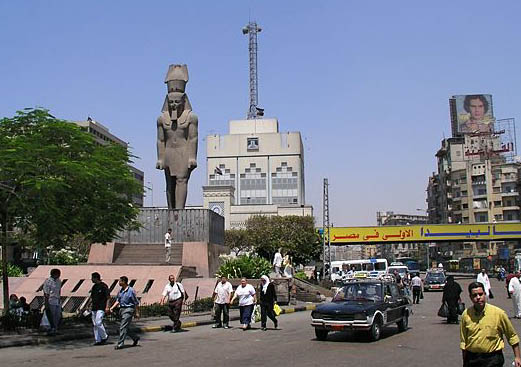 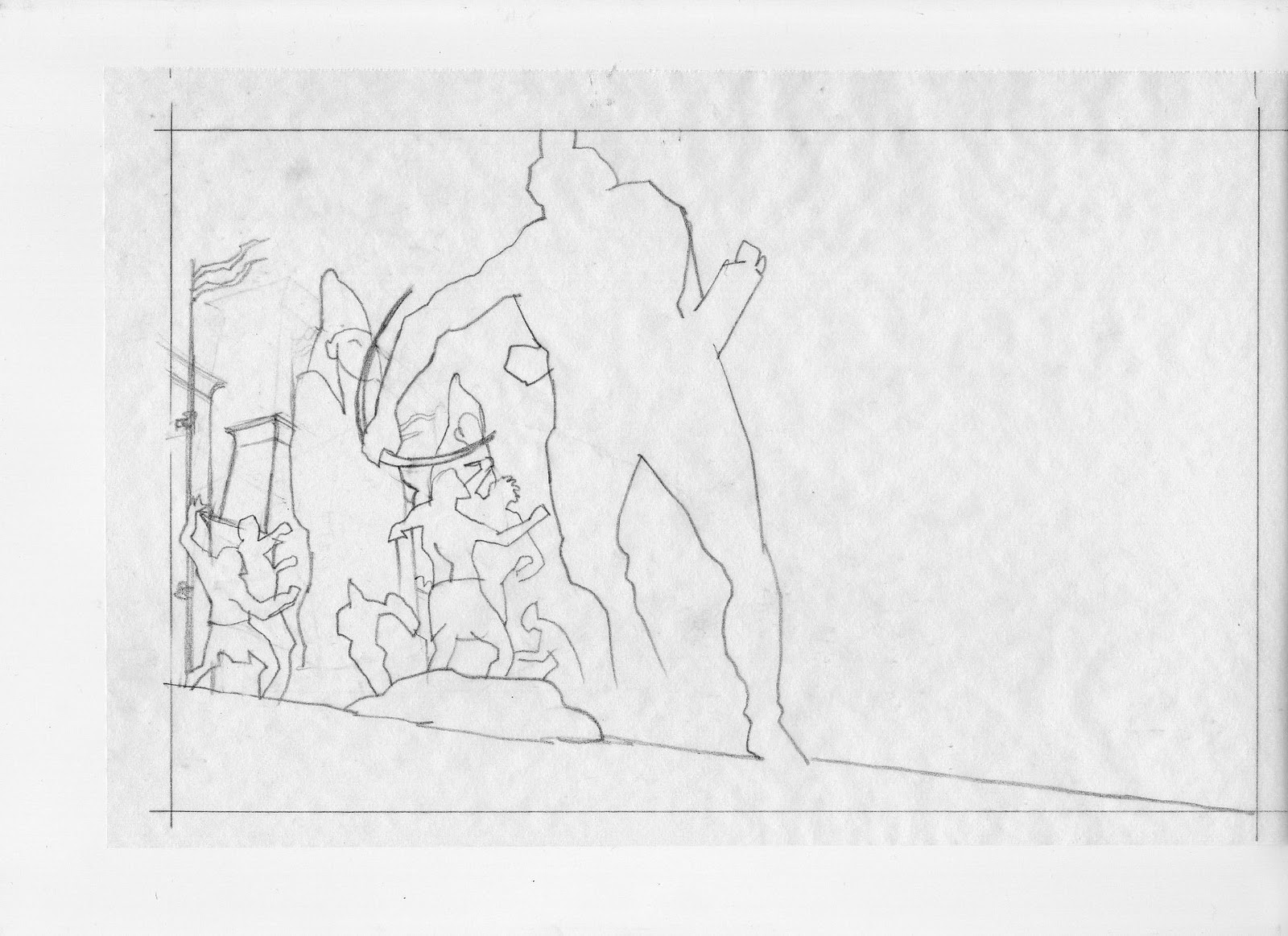 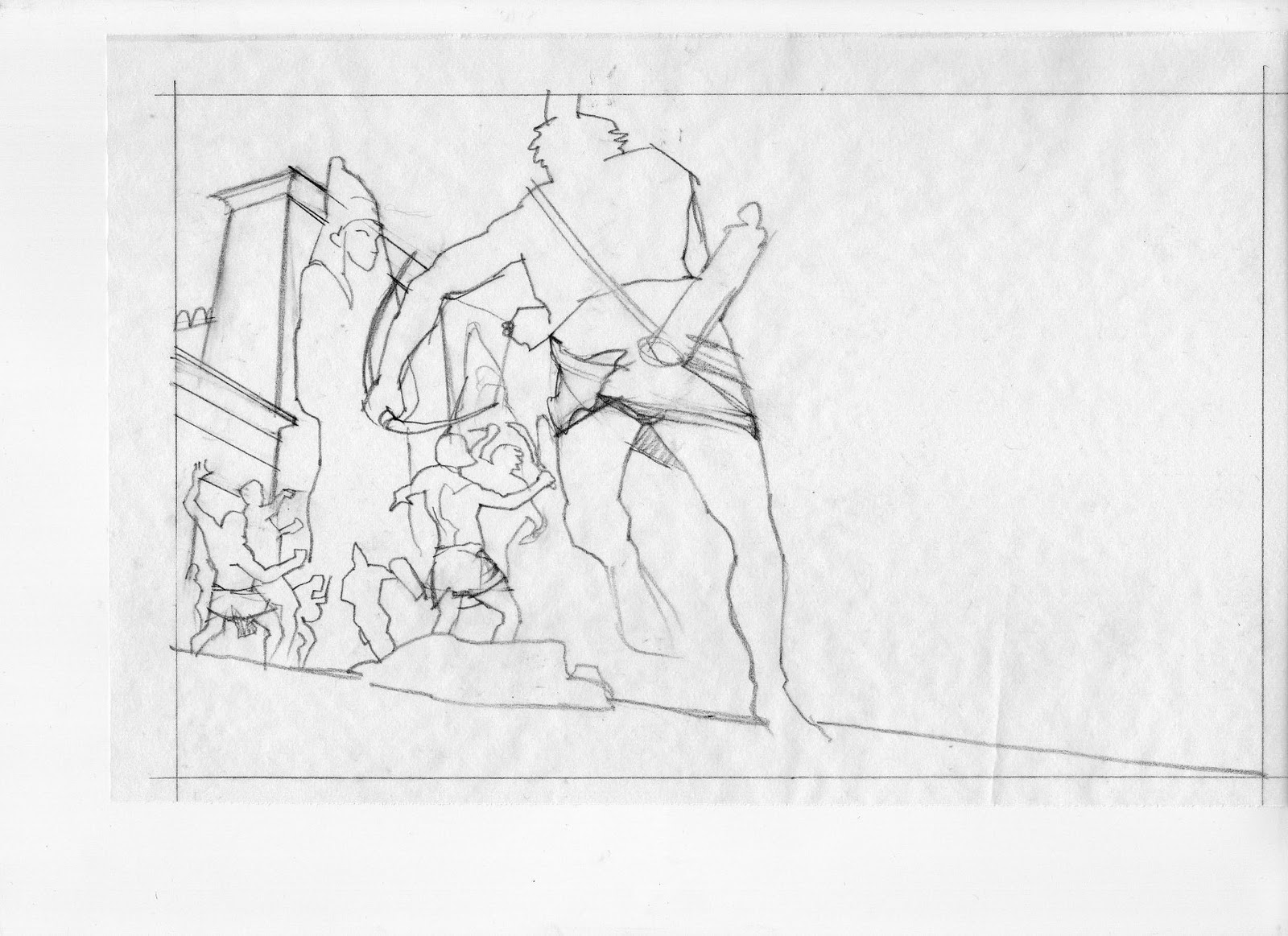 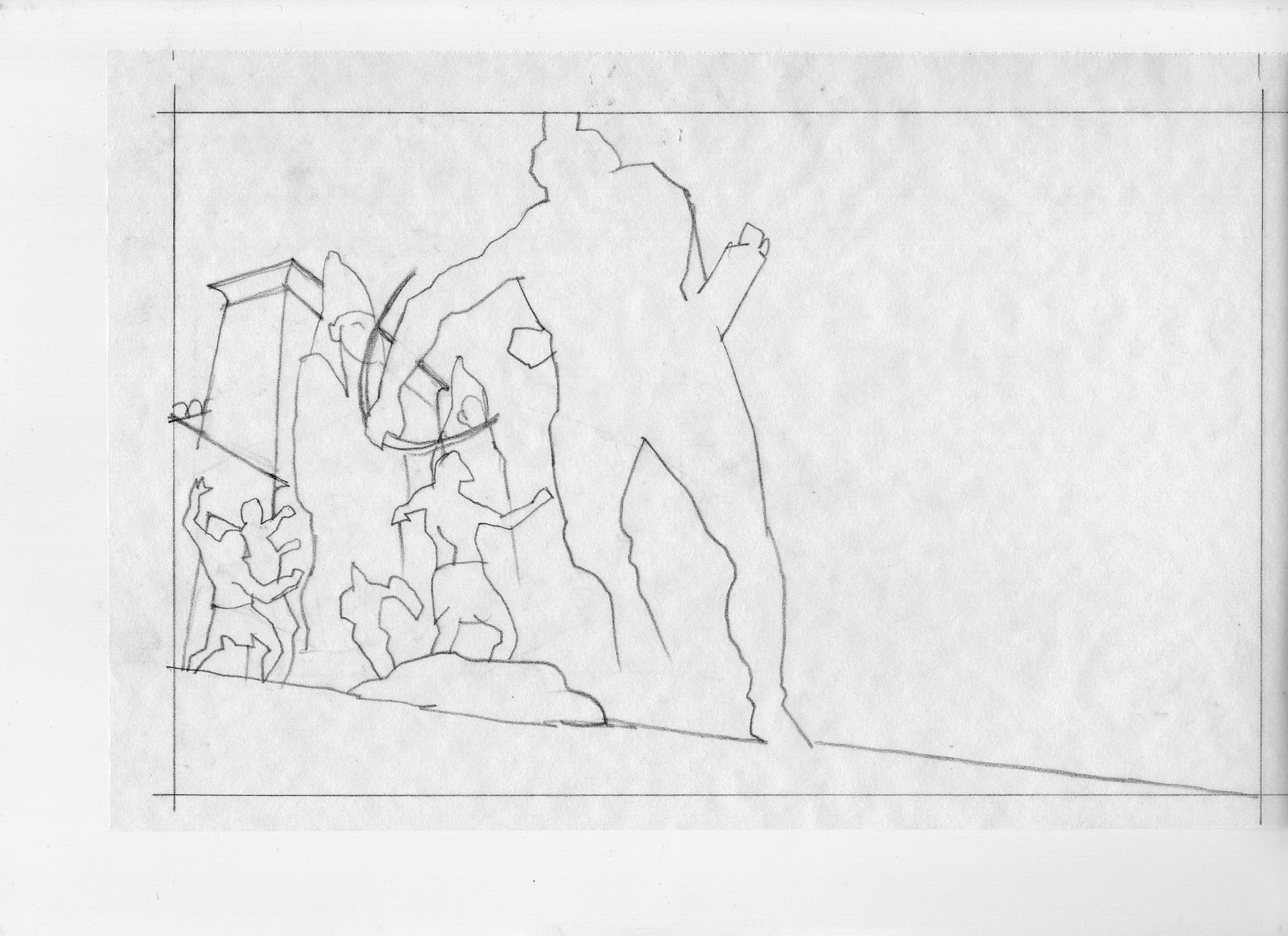 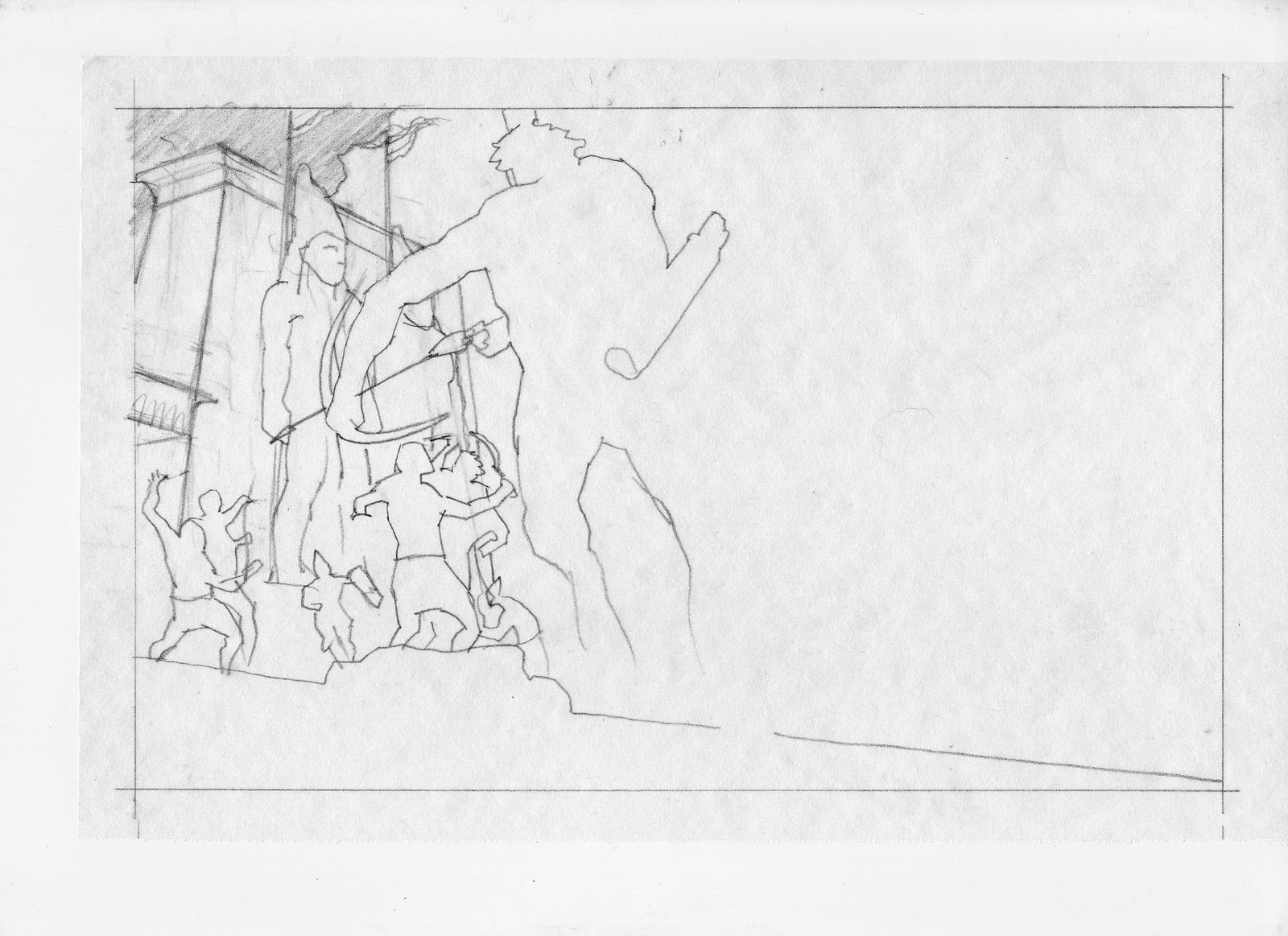 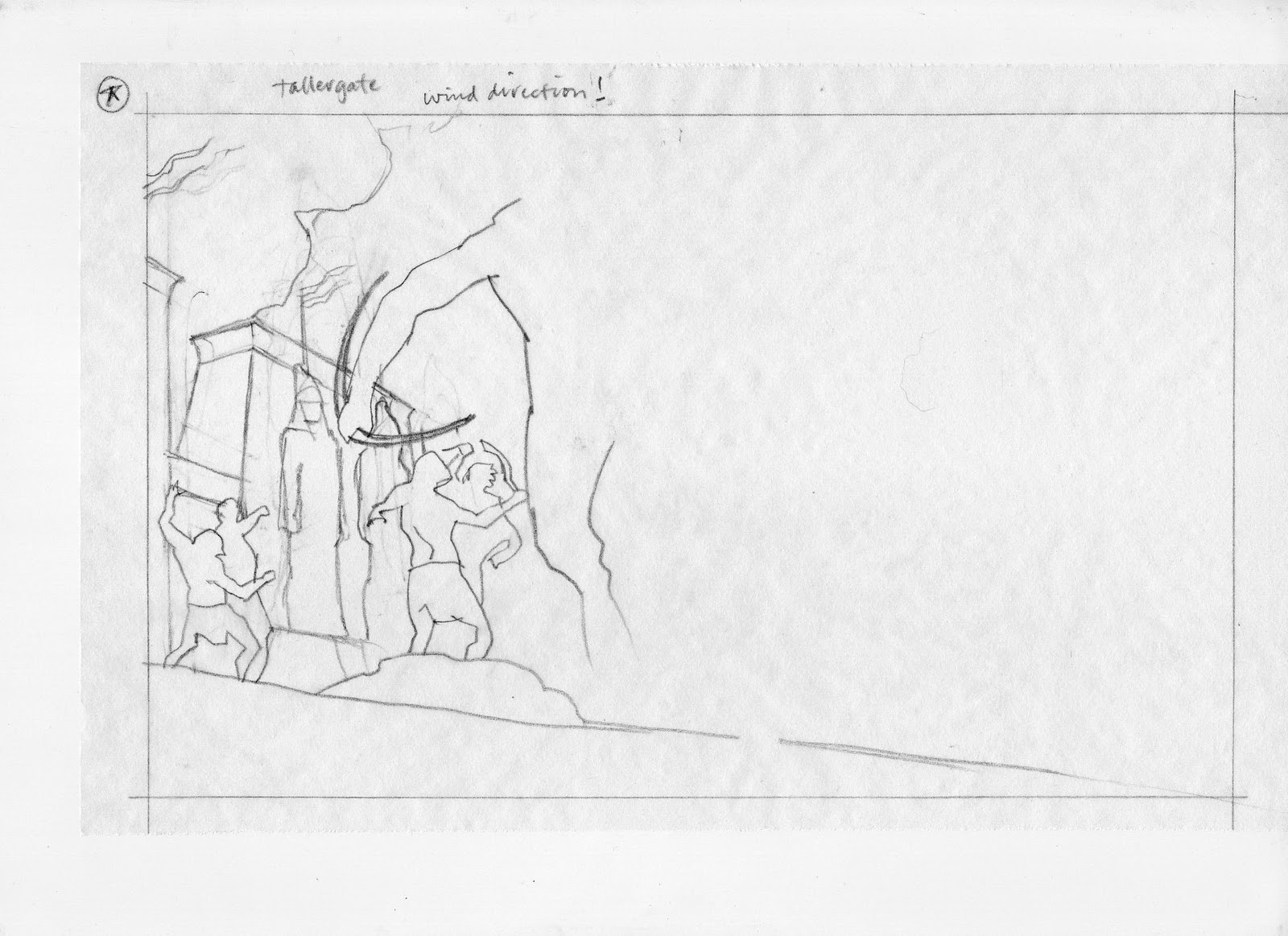 Meantime, I was also working on the second painting design. As the scientists checked out details on one, I would switch back to another to work on. This took weeks.
Eventually, I was given the go-ahead for finish. Then, they would have at it again, picking over the details of color, light, wind direction, etc. (yes, they even knew the correct wind direction that day.)
The last thing they said was, “should we really have fire arrows?” Jeff came to my rescue on that one by saying basically, ‘are you kiddin’ me?’. 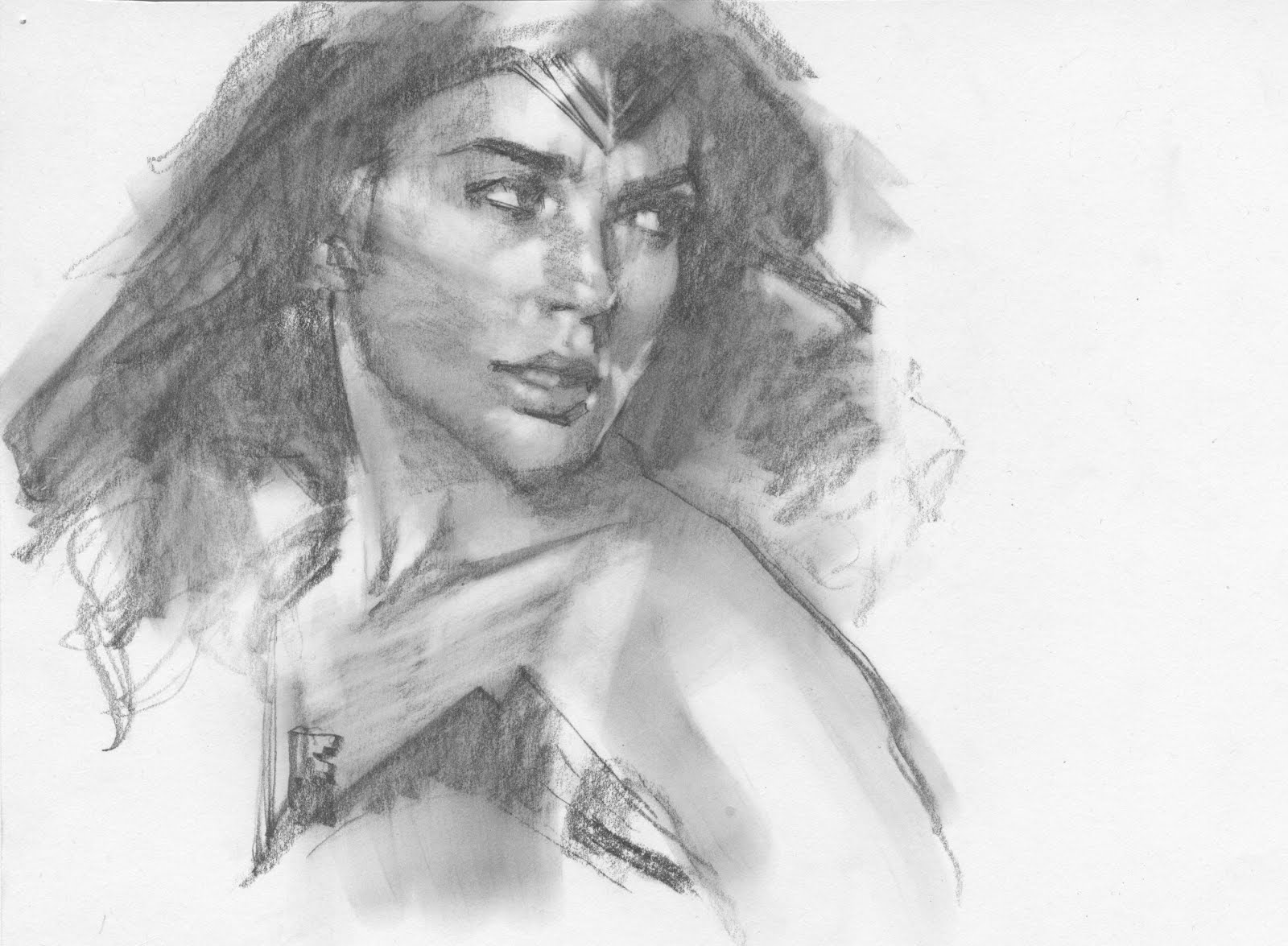 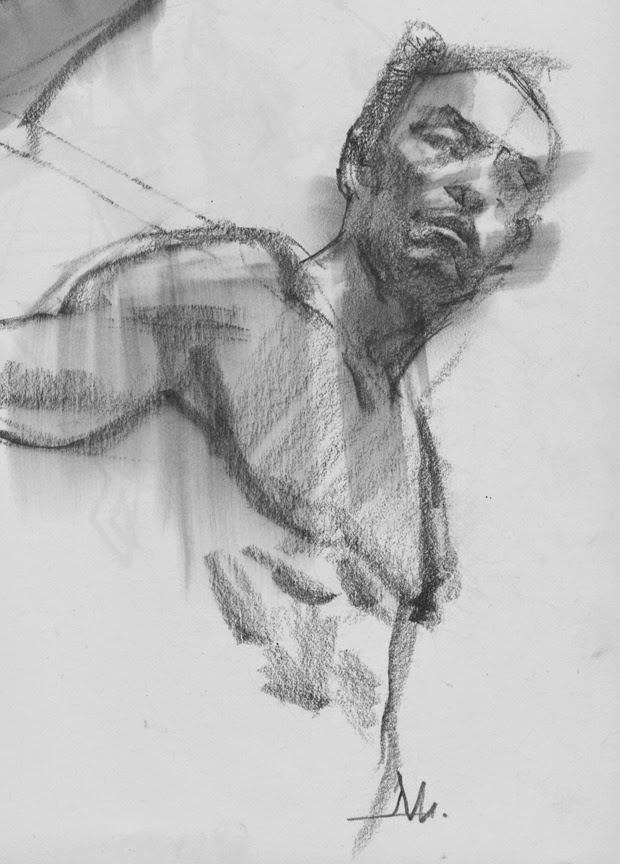 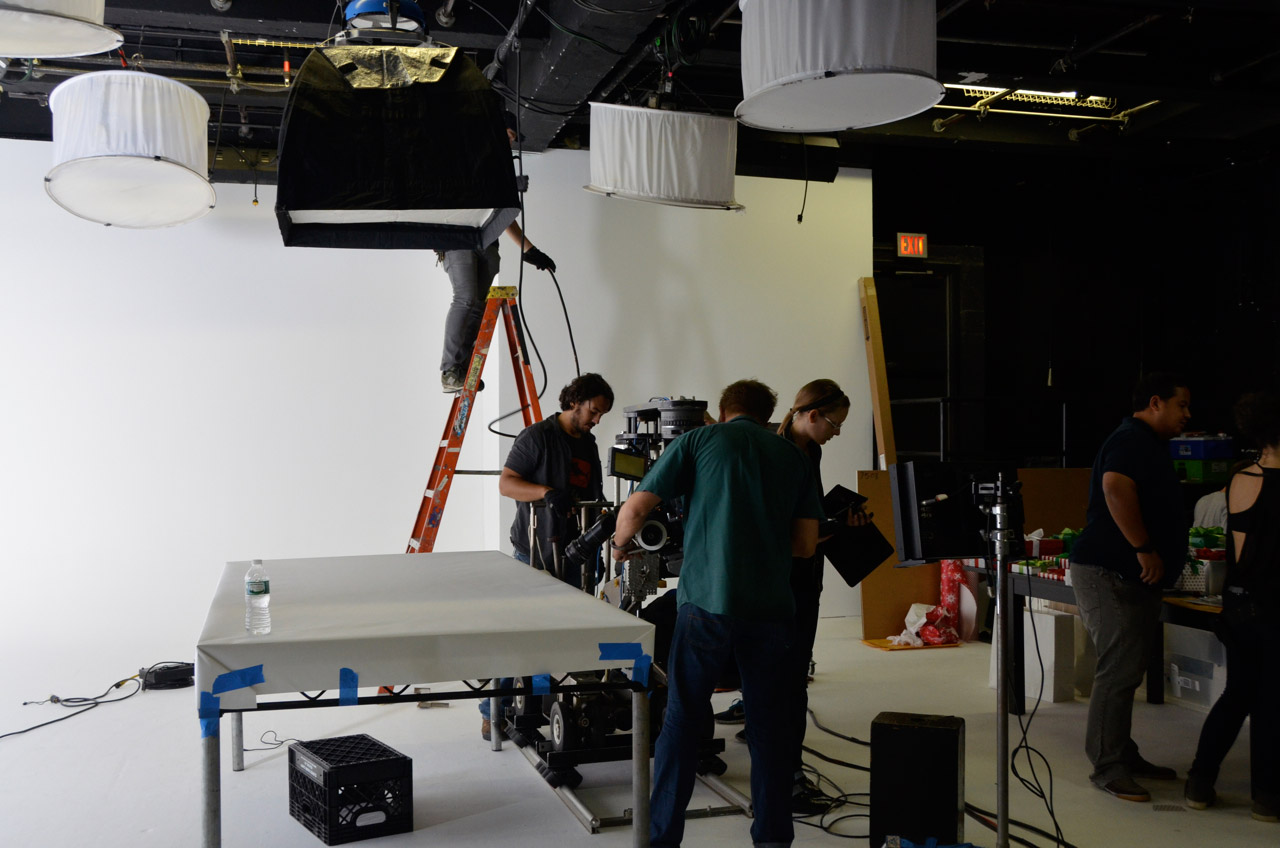 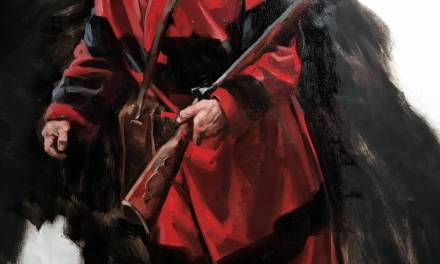