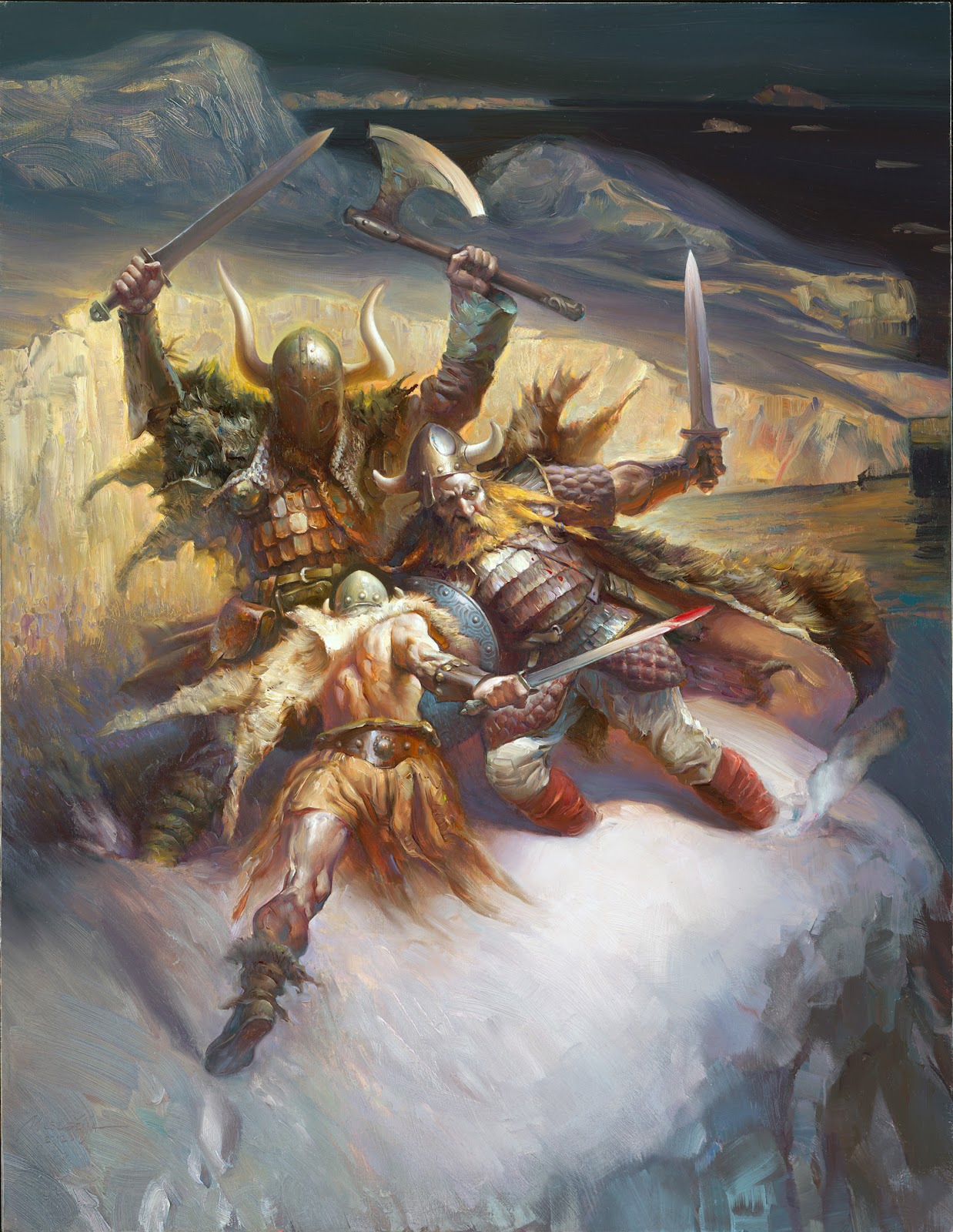 ﻿﻿﻿﻿The Frost Giants painting is finally
finished. It has been a gigantic struggle, partly because of the sudden and significant shift in the composition,
that took place due to the change of the background;  and partly because of the fact that I was not
able to work on this painting in one piece, but had to interrupt the process
many times. It was a real struggle and, to be honest, I don’t know who won the
battle, the painting or me. 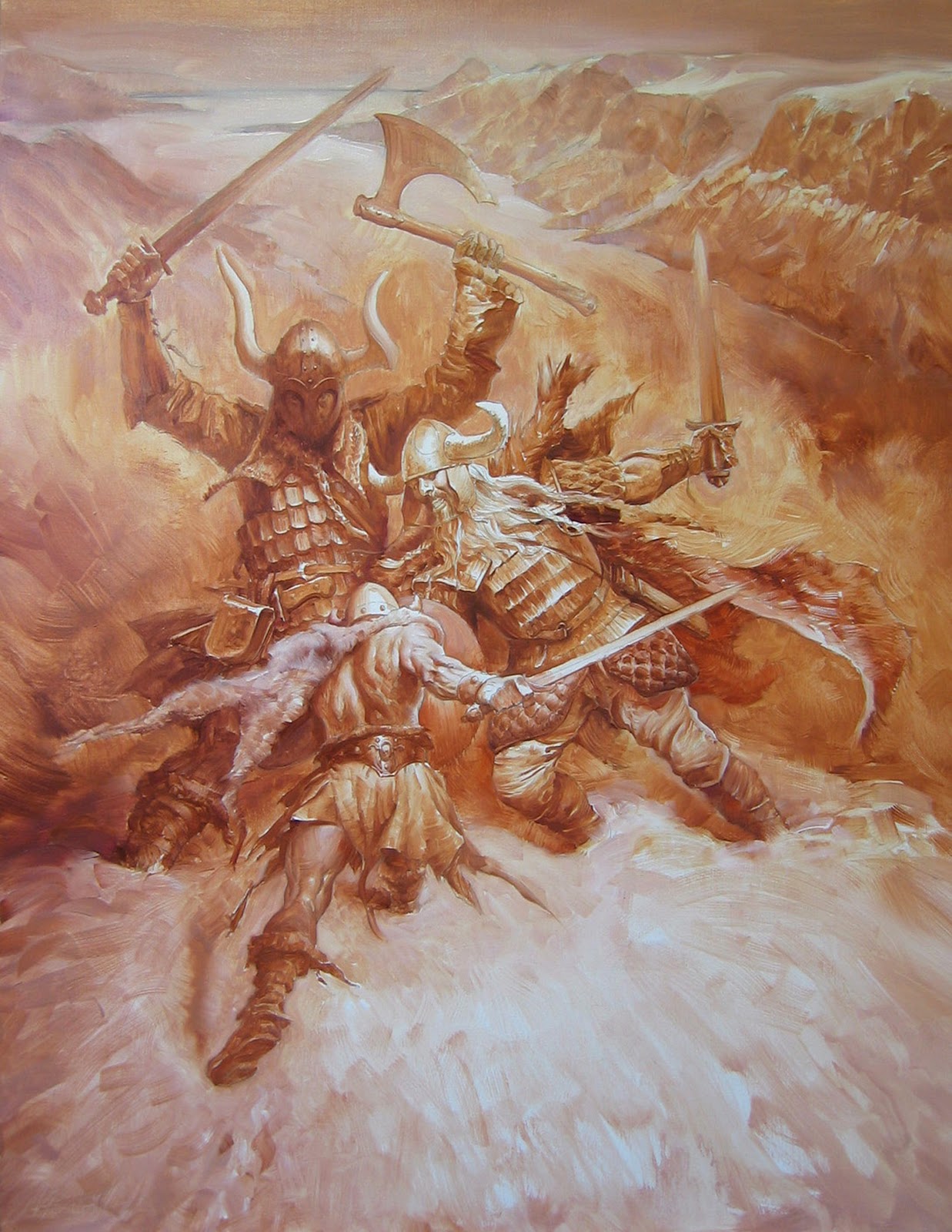 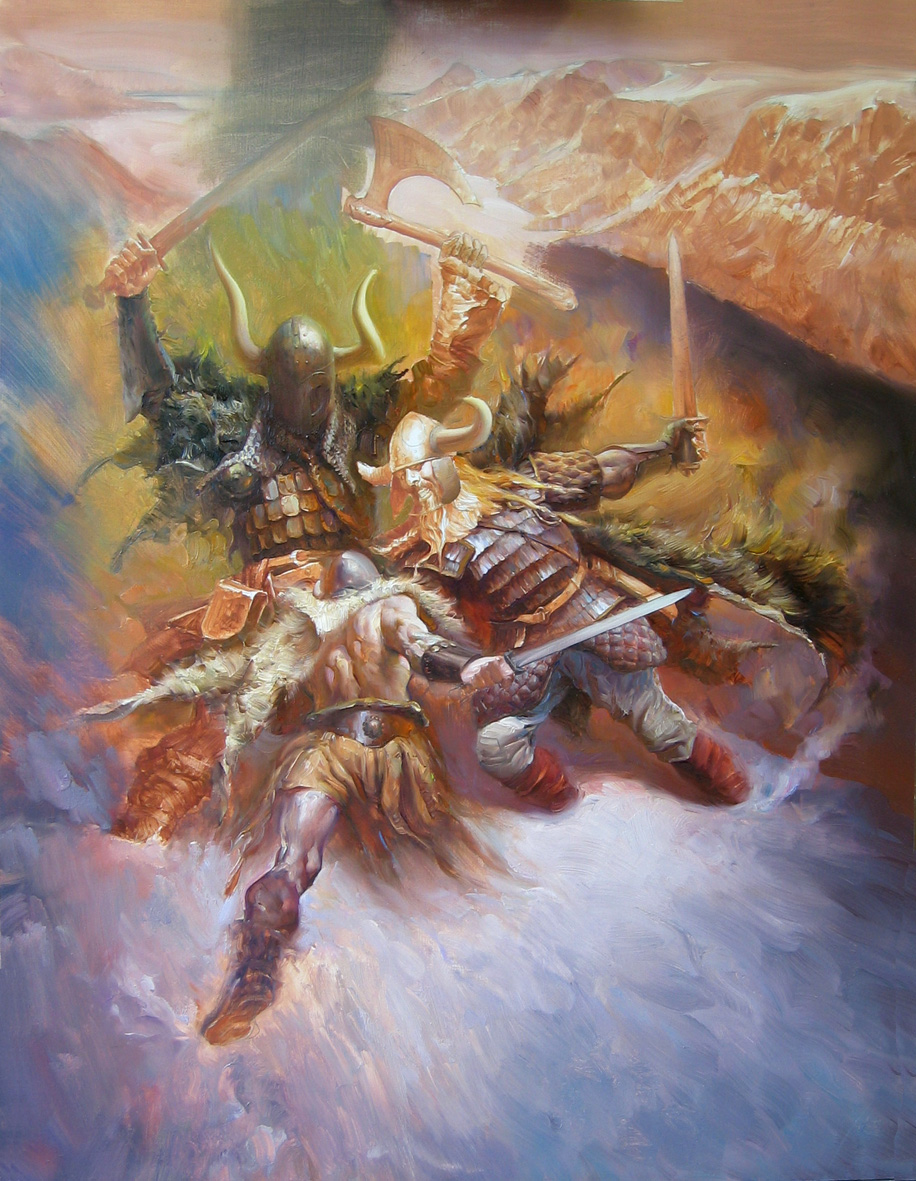 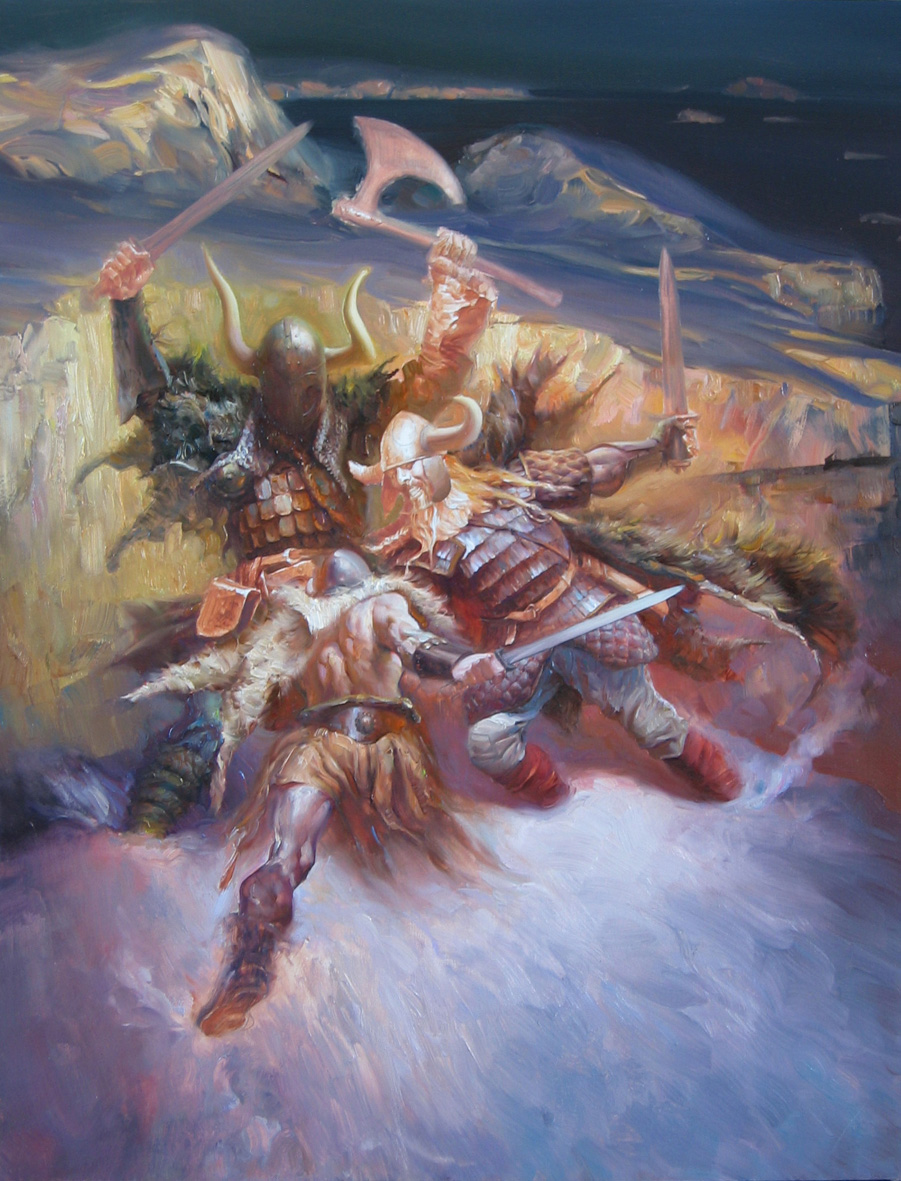 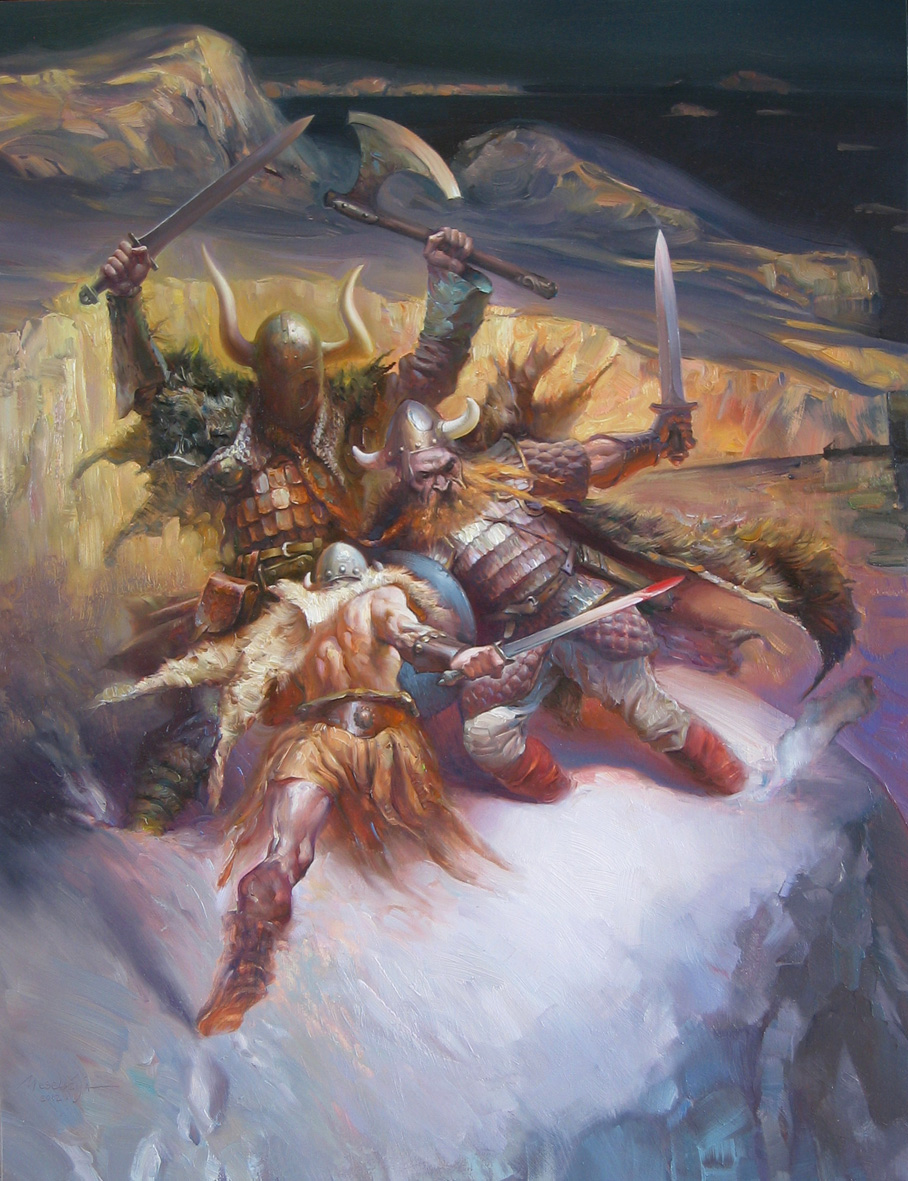 However, I would like
to say a few words about the composition of the piece. 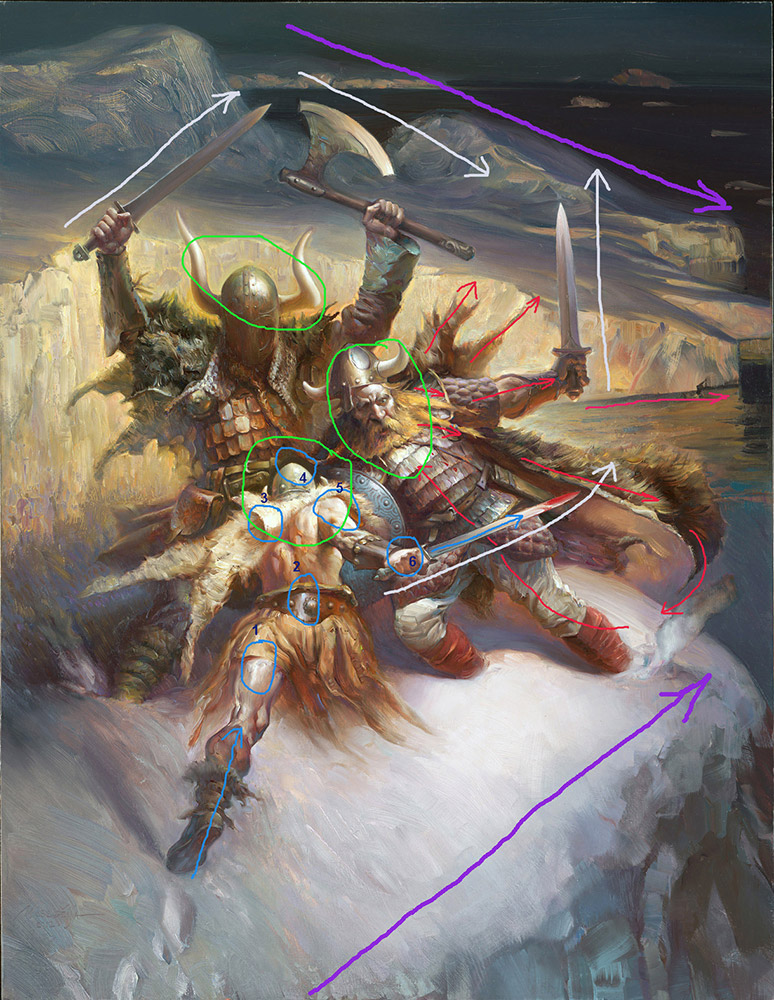 This is basically a
central composition that is slightly shifted to the left in order to create a
subtle and  necessary imbalance, for when
created consciously and in the right way, imbalance stimulates the energy flow (motion)
through a painting.

There are four major
directions along which the energy flows through the painting. I call it the “energy
flow”, but I suppose it could also be called  “directing the spectator’s  attention, or gaze”.

The first is the
circle (white arrows) that is created by the sword and the axe of the back
giant, the Conan’s sword, and partly by the sword of the collapsing giant. I
said “partly” because this last sword is positioned in a way that creates an
opening in the circle. This opening allows the energy of the blow of the Conan’s
sword to break through and to flow out
of the circle.

Secondly, The sharp
edges of the cape of the falling giant, the outstretched giant’s left arm,  the bottom edge of the glacier (iceberg) behind
him,  the giant’s hair and the long line
of the cape (red arrows) are pointing out the direction of escaping energy.
Following this last line created by the giant’s  hair and the long edge of his cape, the energy
flows out of the circle but, because of a gentle curve at the cape’s end, it
goes back  to the center of the
composition via the outstretched left giant’s leg.  The general form  and
the direction of the glacier in the background, and the positioning of
the snow-covered hill slope beneath the feet of the three figures (pink arrows),
emphasizes the direction of energy flow of the Conan’s sword.  I could depict this movement even more
dynamically, but I chose to use a more subtle solution, for I believe that this
subtlety penetrates deeper because it is mostly subconsciously perceived.

Thirdly, the figure of
Conan, with its outstretched left leg,  pierces
like an arrow the central, relatively compact mass created by the giants. The
energy (the spectators gaze) flows from the lower part of the leg, via the four
points of highlight (blue, 1,2,3,4) towards the top of Conan’s helmet. It ends
up in the center of the composition, but then  via the highlight 5, the energy moves further
down the Conan’s arm, and at the highlight 6 it turns sharply to the right and
goes to the red top of the sword. Than it follows the circle ( white arrows),
or it goes back to the center of the composition via the line cape-curve-leg,
or it takes the shortcut via the line cape- hair.

Fourthly, the major
highlights are the three  green circles
that form a kind of triangle. This triangle allows the energy to bounce back
and forth between these three central points of attention. This, in combination
with the previously mentioned lines of the energy flow, enables the energy to
stay inside and to circulate freely through the middle part of the composition,
instead of being scattered all around the painting. This scattering of the energy
usually creates a pictorial cacophony which, if not consciously intended,
reduces the impact and the general quality of the painting.

At the end, if you
think that I premeditated all this, you are wrong. I did it intuitively and
later on, when I was halfway, I realized what I did and why… and it felt good. For
me, this is the right way to do it. First feel, than rationalize. 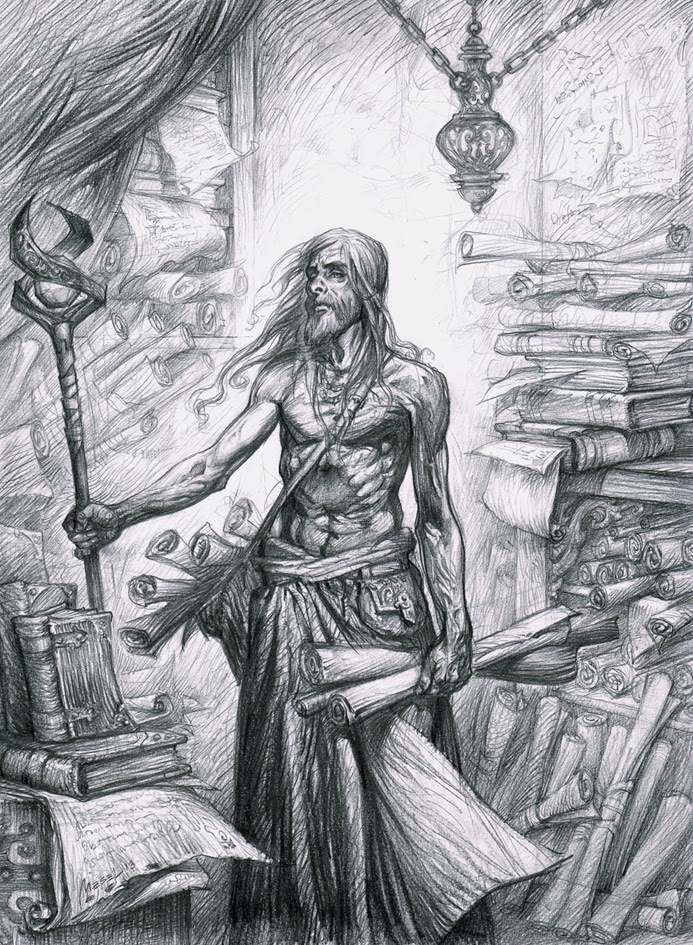 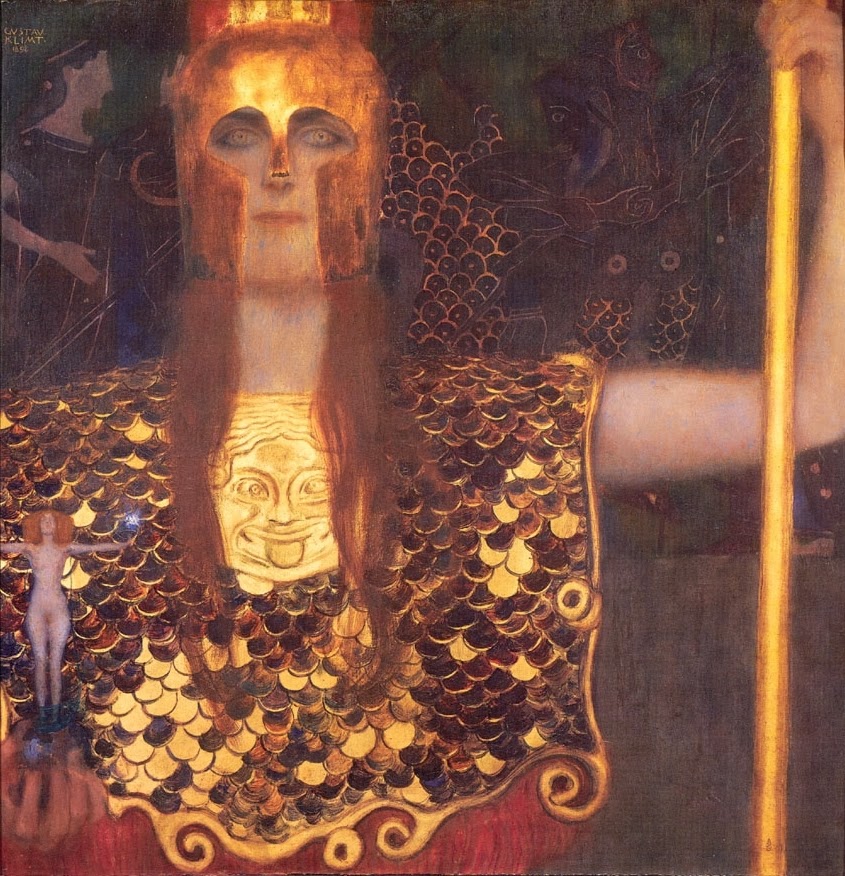 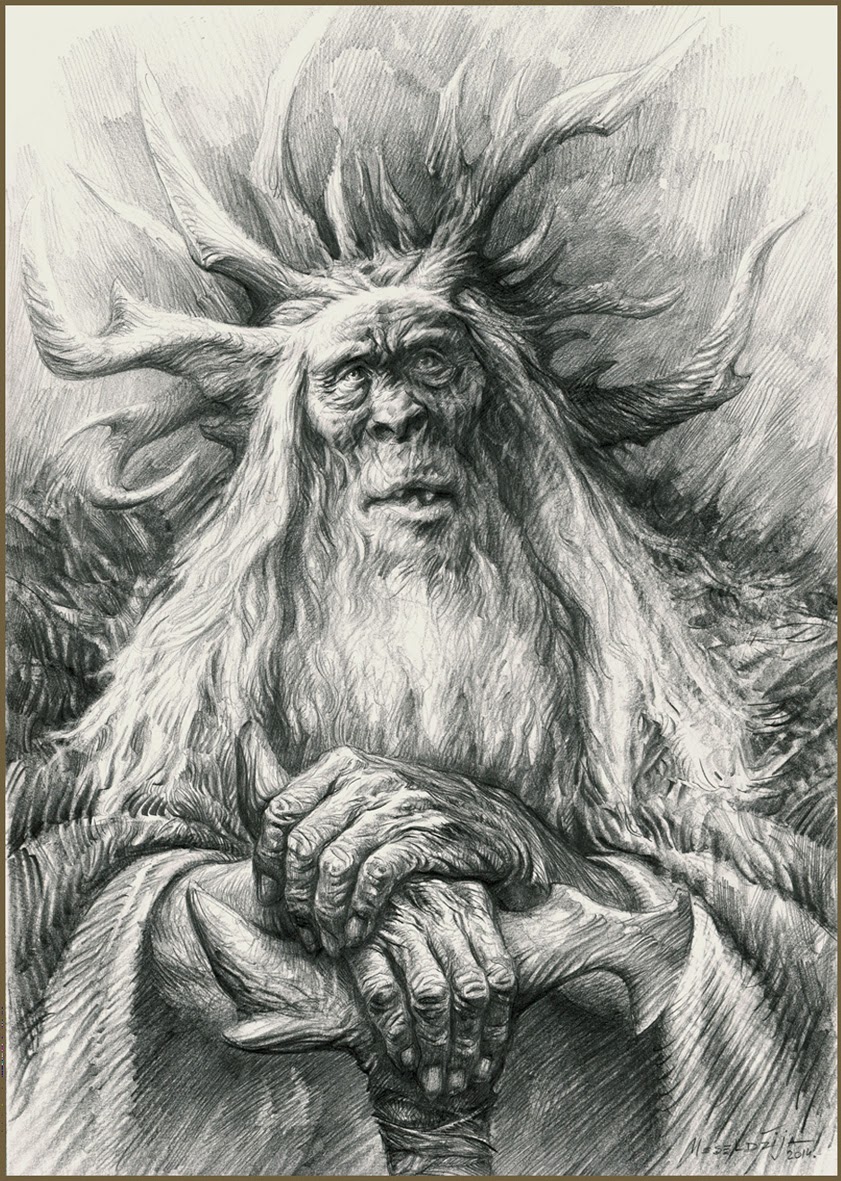