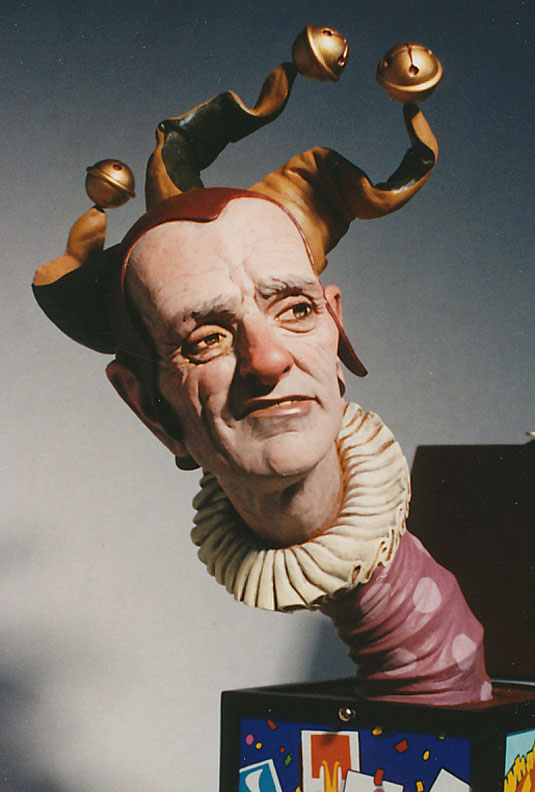 I liked the idea of a hard faced 40’s style gangster being the character in a Jack in the Box. Not new, I know. Playing against type is an old and well tested device. But I liked the idea and thought I could do something with it. Once I found the face, I was in. Ordinarily, I would have done a clay rough, gone to waste mold to wax and done the finish work in wax to a master mold and resin. At the time, I was using a clay I’d gotten from Loveland Clay works and thought, by staying with it as a finish material, I’d be less inclined to get too fussy. Its funny the things you go through while working on as piece. I’d finished the head and was working on his support and thought, his spring coiled body was one of the most disturbing things I’d ever sculpted. The way it twists up and around… is just plain creepy.

After the portrait was complete, there was the box to contend with. I built it out of masonite and wax sheet. I knew, early on, there’d be side art to contend with, and so, made the panels and lid with frames. Molded it and cast the parts in resin.

The more I thought about it, the more I saw the piece being about the cutting edge of humor. Or, more to the point, depending on which end of it you’re on , humor that wounds. And what humor construct carries the double edge better than satire? That’s when I found the element that would drive the graphics for the sides and lid of the box. 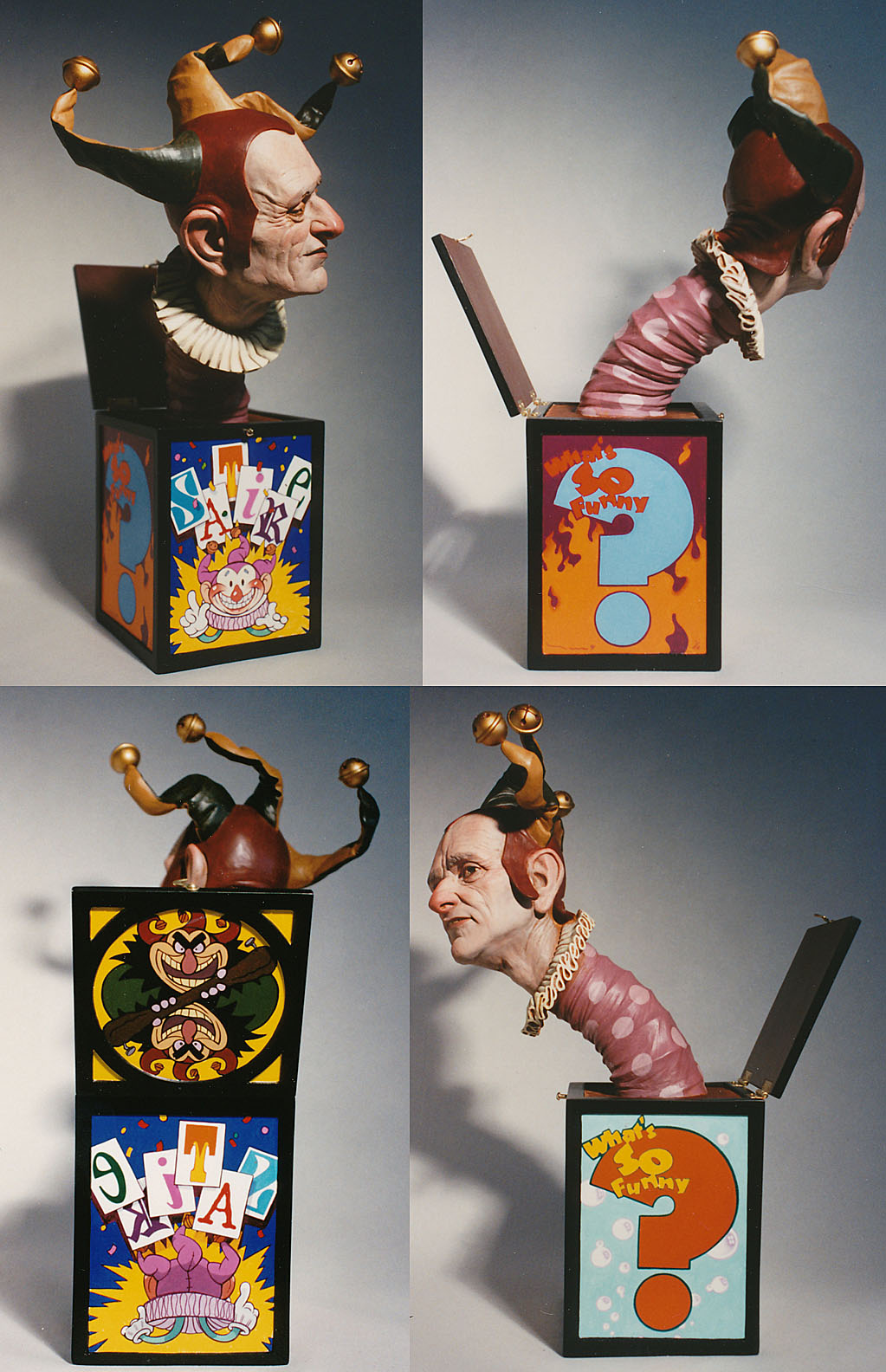 “What’s so funny?” became the side art. And to emphasize the contradictions, one side was fire and the other soap bubbles. The front was designed as oddly happy and carefree, especially juxtaposed with the main character . I kept hearing, “Hey kids, what time is it?” Puppets are scary. Howdy Doody was one scary ass puppet. And the character in art reminded me of Howdy. The back was a behind the scenes view of the front. The lid was a reflection of the then ubiquitous circle with the diagonal bar, with the bar being the club held by a maniacal Jester. Humor to beat you over the head with.

I’d just bought a copy machine, and copied the art onto Bristol and painted it with gouache, fixed it and glued it into place. I painted him in muted, dower colors which played against the bright, cheery colors of the box. In hindsight, it sounds like I knew what I was doing. But, as is more often the case than not, my understanding evolves after the fact of having done it. I had no intention of doing another one. I was done. I’d sold the piece and that was that. 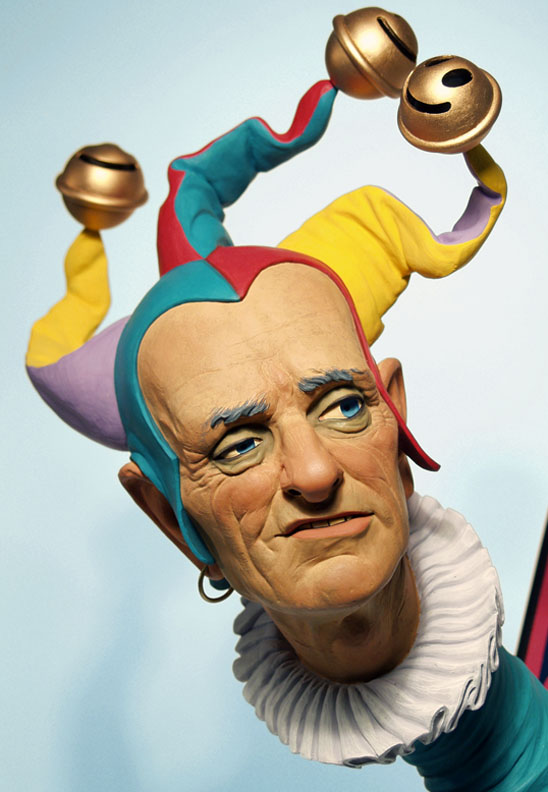 I don’t know what made me want to do another version. I approached this one as something more technological. A Jack-in-the-Box digital machine. Most of the devices we were dealing with at the time had the same basic features; play, stop, pause, up, back, fast forward and reverse. Then I thought, how silly it would be if this state- of -the -art machine had to be wound up. The key is two open hands and one fist. Two steps forward, one step back. The color scheme overall, was much brighter. The art much more graphic. I used a version of Photoshop Elements to help create the art and used an ink jet printer to reproduce it. 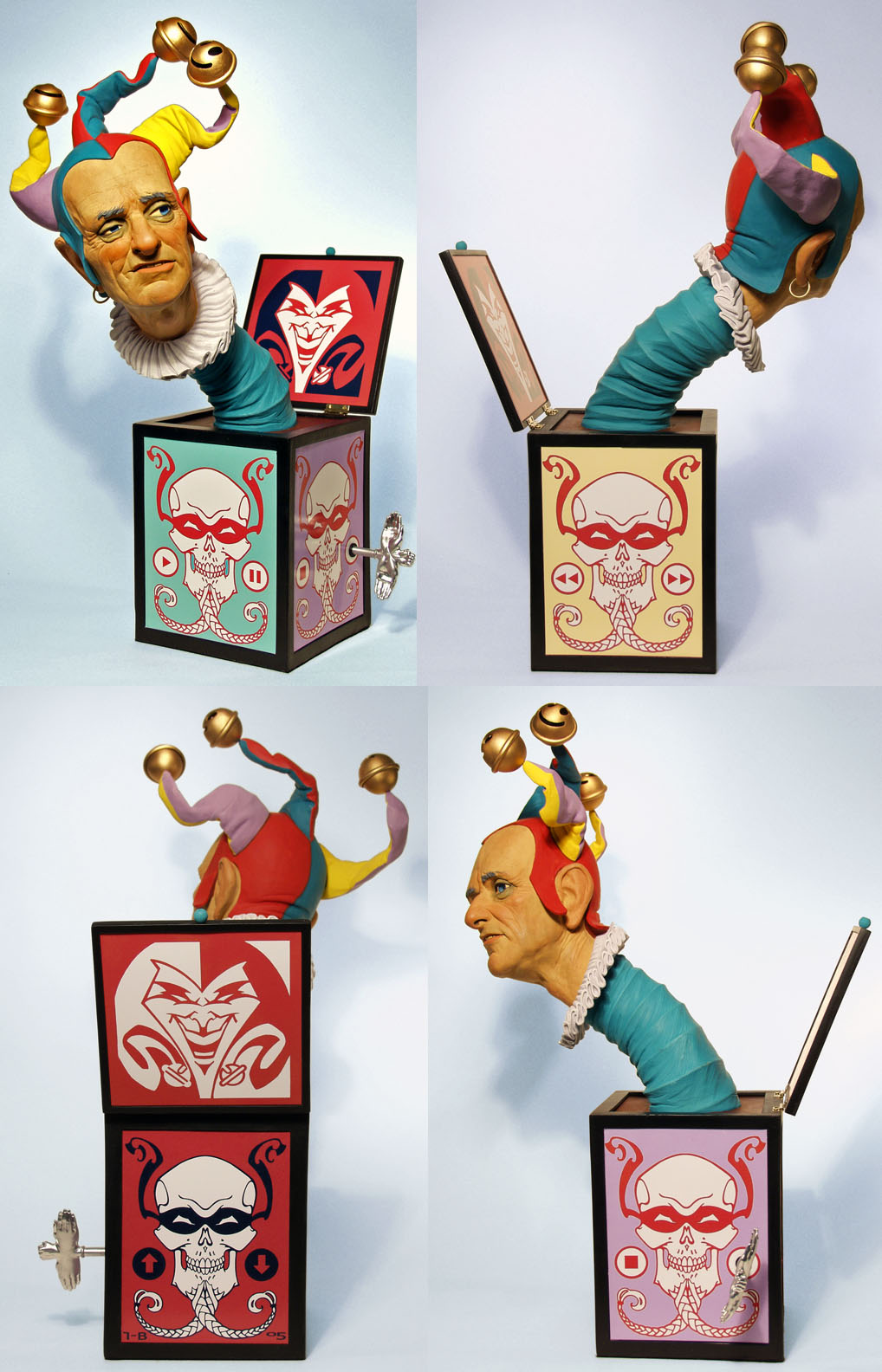 I resculpted the bells into oversized “happy faces”. There’s still no logical, practical means of locking it down. I gave him an earring. I’m not sure why. But it seemed to work. One keeps looking for character detail. This version appeared as part of The Society of Illustrators: Spectrum, the best in contemporary fantastic art, 2009.

After the show, the piece was shipped back, and for all intents and purposes, destroyed. It was laid in a box with a couple of sheet of bubble wrap. That was all the consideration it got. The box was broken beyond repair and the main figure badly damaged. As far as I was concerned at the time, that was the last “He Who Laughs Last”, I’d ever produce. 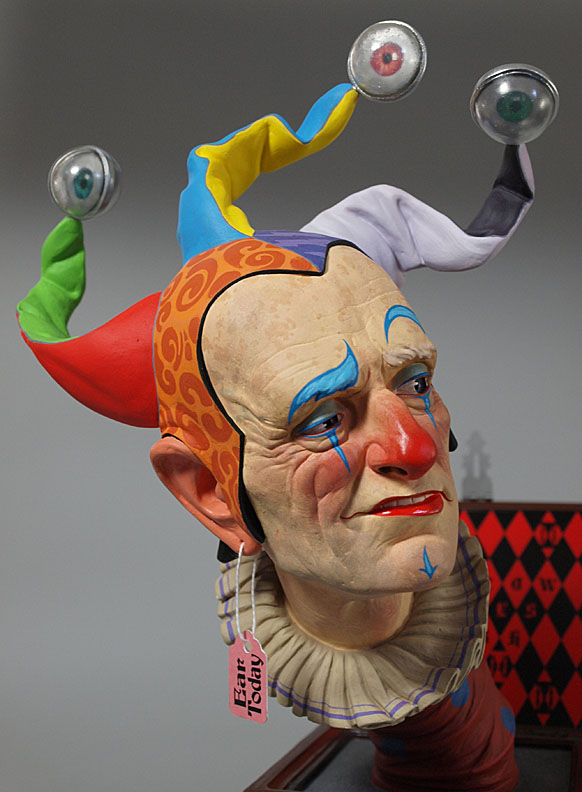 For a while, I had the main figure of the 2005 version propped on a shelf in the studio. I won’t say he mocked me, but we weren’t the best of friends, at that point. One late afternoon, early in the year, a light snow falling through a gray, cloud choked sky, a little light bulb went on. I dug out images of the first two versions and realized what I’d been trying to express with this piece over the years. Mortality. My mortality. We’d gone through a period of recent deaths, my wife Mary’s parents, my dad, a friend’s son. Its almost impossible not to be affected. I started work on the last version of this piece with a much clearer vision of what I wanted to say.

I repaired and refined the main character and got to work on the box. I wanted to create something that looked hand crafted and ornate. One of the first artists I felt a kinship with was Albrecht Durer. So, I thought this would be an opportunity for us to work together, in a way. Once the master side panel was sculpted and molded, I selected five Durer images. I wanted the images to be framed under hand blown glass. It took a few tries to figure it out, but I found a way to open-face cast clear resin, lay of a sheet of rumpled aluminum foil on the curing resin and let the heat generated with the cure to form bubbles on the surface. This would become the inside under which the images would be viewed. The design for the key and keyhole on the back are simple skull devises. 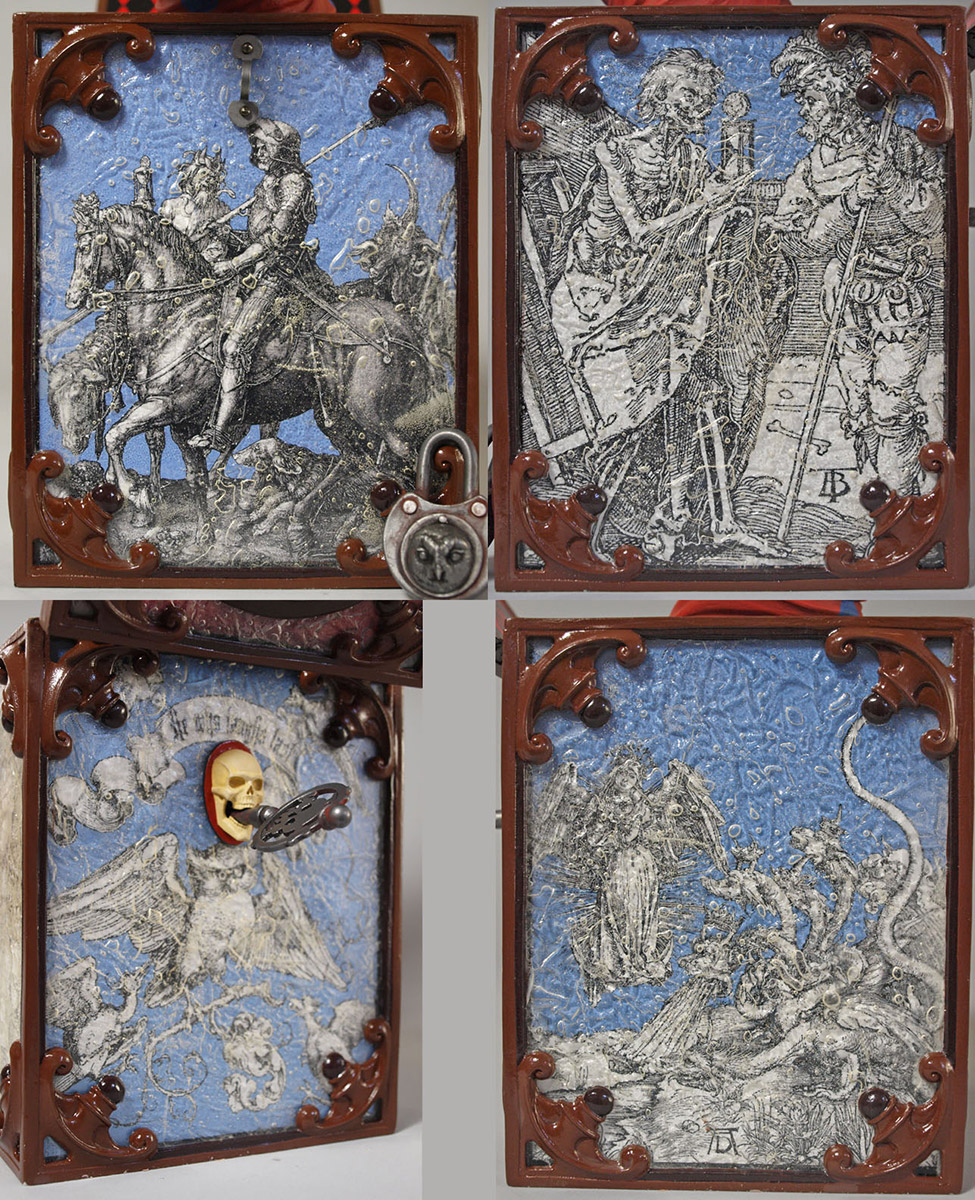 The lock, that leans against the front, uses the Owl as a symbol of wisdom and transition. This time I made sure to show that this box could be closed and locked. The inside of the lid has a graphic pattern of diamonds and hourglasses and an anagram, “Hallow Gates Hush” untangled to “He Who Laughs Last”. The top of the lid is a Durer skull under a magnifying lens. 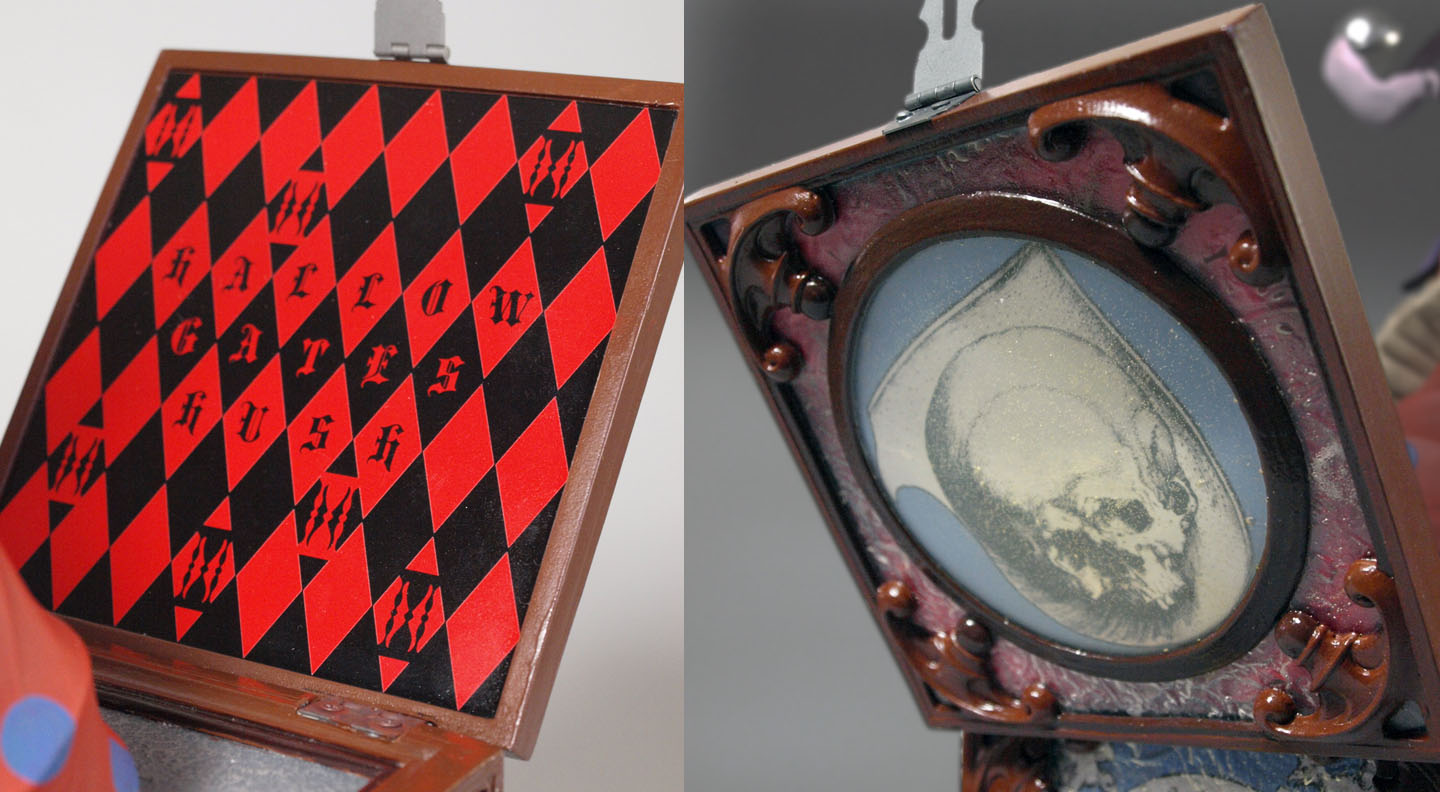 I wanted to reference the first “He Who Laughs Last” by using the polka dot pattern I used previously. For the rest of him, I went bright and pop. He wears make-up for this version and I painted his ears to look like fake plastic ear covers. I swapped out the earring for a label, one side reads “One size fits all”. Death does that. And the other side, “ear today”. A terrible pun, I admit. I replaced the bells with eye orbs that can be pivoted so they can all look in different directions or all at the same place. Death does that too. This version appeared in Blue Canvas magazine, issue no. 10.

He’s been in the studio for a little over a year. He doesn’t mock any longer. We may not be the best of friends but we have an understanding the first two versions and I had not. He’ll make his second live public appearance at Spectrum Live, May 18 – 20. I’m hoping he finds a new home.