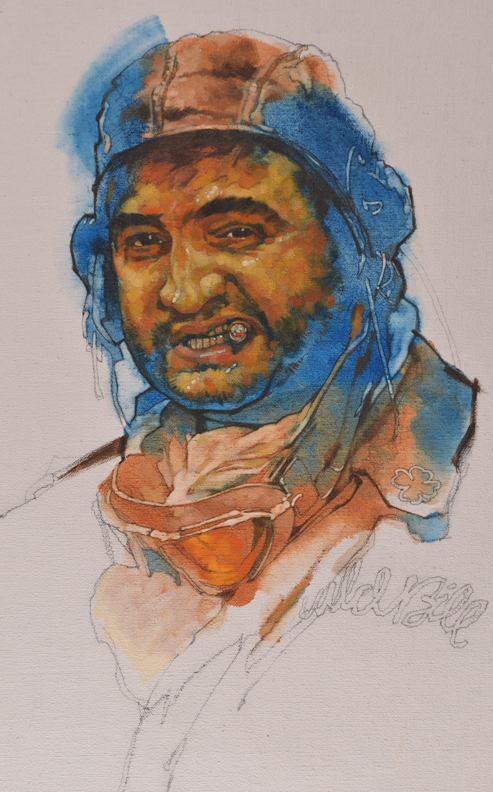 An early example of many portraits used in my portfolio to specifically get movie poster work.
Greg Manchess

Rehearse
I’ve heard a number of new artists complain that no one wants to take a chance on using them. That clients can’t recognize their potential. As if all their ‘talent’ will come rushing out once someone does. Where else in life does that ever happen?

A pro doesn’t wait, they do something about it. It’s called rehearsal. Actors rehearse, musicians rehearse. Firemen, police, SWAT teams, writers, singers, directors, The Blue Angels for crying out loud. Everybody rehearses.

Don’t think practice, think rehearsal. If your potential isn’t already out in front of a client, it’s not about to come out on it’s own. Clients are vary leery of putting their own jobs on the line just to ‘take a chance.’ 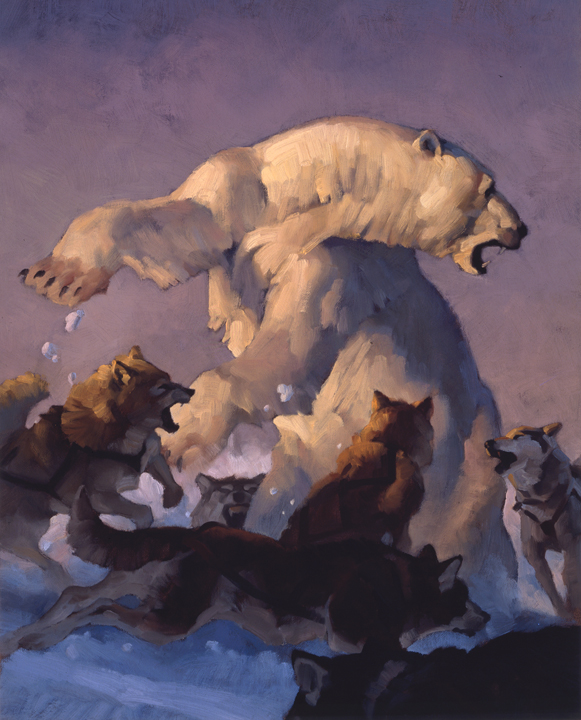 This painting was failing right and left in the beginning stages. Later it took the Hamilton King Award at the Society of Illustrators.

Persistence
Rehearsal forces you to be persistent. You must keep going in the face of fear and failure. Within those areas resides that witch, the Muse of Discovery. It’s about learning to learn. Yes, it’s about finding yourself. But what will you do when you find it? And when do you know? Persistence. In the face of failure. It takes courage to learn what you don’t know, what you fear the most. 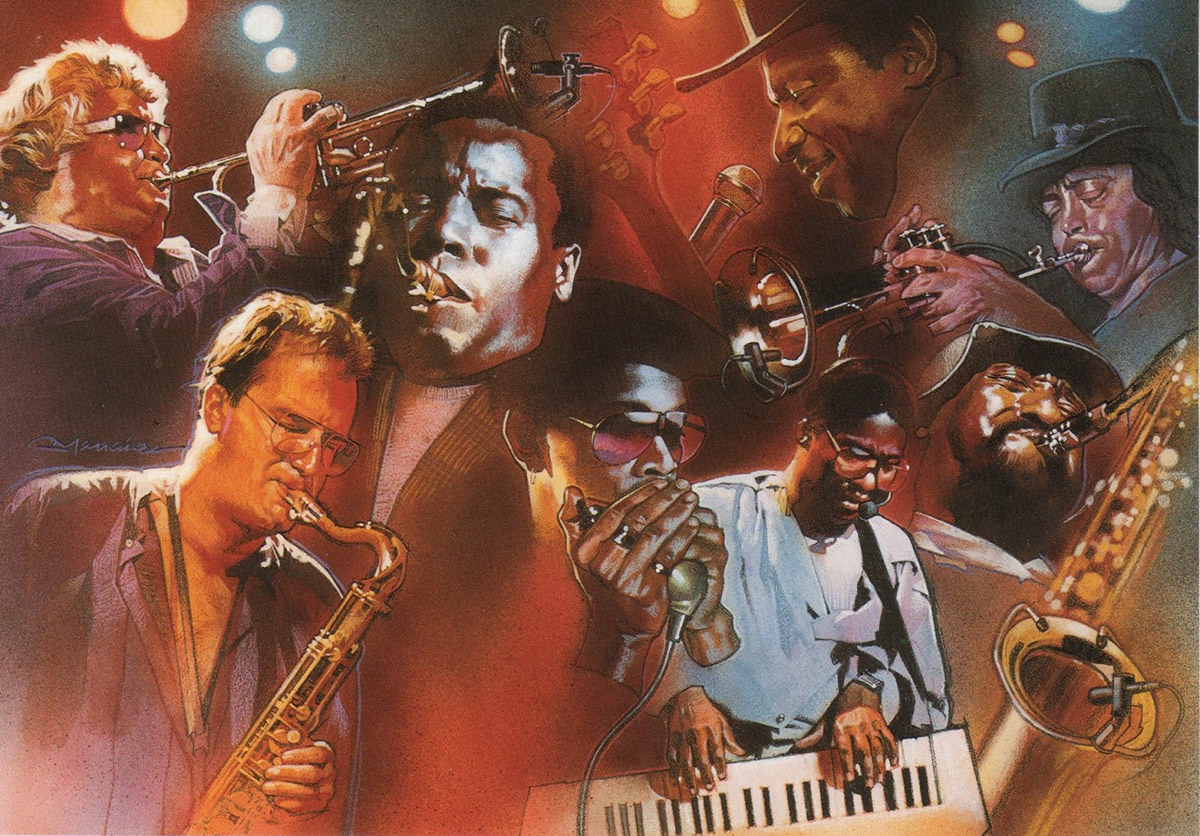 Airbrush, pastel, Prismacolors, guache and acrylics…anything to get the painting to the surface. Early advertising job.

Duality
“Holding two opposing ideas in the head at the same time and still able to function is the mark of a superior mind.” Or something to that effect. F. Scott Fitzgerald. I can imagine as a writer he was enthralled by this realization.

It’s just never quite clear cut. If you are a creative person, a visual storyteller, then understanding this contrast is what makes a life, and a painting, worthwhile.

In painting, as in life, it’s a both/and world, not either/or. Constant juggling.

Just a small selection of the many styles I carried in my early portfolio. I was determined to find my way.

There are still days that I stumble through a piece that doesn’t match the vision in my head while I’m working on it. Whataya gonna do? Call the cops? Stick it out. Focus.

A job that demands consistency, demands that you get and keep an approach that will work throughout the entire project.

Consistent
In the light of a both/and world, you still must paint a picture that’s consistent within the painting’s limitations that you’ve set up. Each painting is its own world, with its own criteria.

The same goes throughout your portfolio, and larger still, throughout your career. As the above highlighted words may help you recognize the quality you’ll bring to the picture plane, your work must lend a consistency across it that is recognizable.

No matter how you work. Leave your own mark. 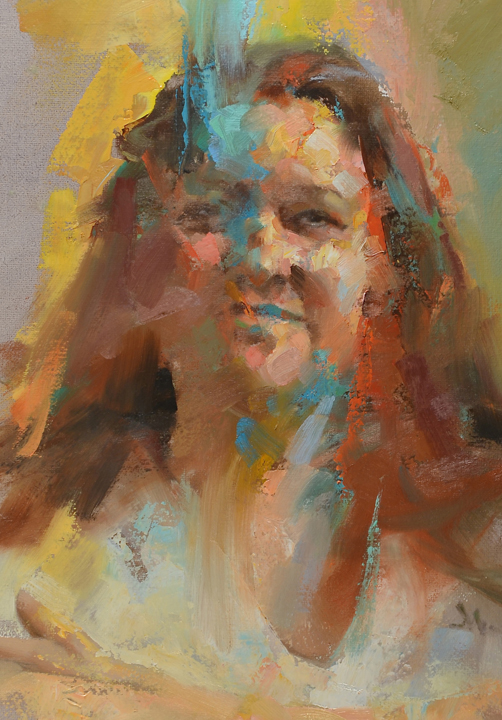 From an earlier Muddy post two weeks ago. A major shift in mid-stream.

Flexible
Most times, smack dab in the middle of all that determined consistency and persistent rehearsal, comes a problem. A wall of doubt, or a technical glitch, or simply a change of mind. Flexibility is crucial. (two thoughts, same mind, right?)

There’s an old tale about a monk who’s traveling with a young disciple and they come to a creek. A woman stands at the edge and won’t go across as she doesn’t want her robes wet. The monk offers to carry her. They get to the other side and after the woman leaves, the disciple says, “Master, it is forbidden to touch women in our sect.” The monk replies, “I have set her down. Why do you still carry her?”

Not only consistent, but maintaining enthusiasm that carries through is important to the client. I did 60 covers like these for Louis L’Amour paperbacks.

Reliable
People are counting on you. When a client asks for your skills, they are counting on you to come through for them. You pull that prima donna junk in the middle of a job and you might as well bag work for a while. That rumor travels at lightspeed in this industry. Besides, it doesn’t fit with persistence, or flexibility. 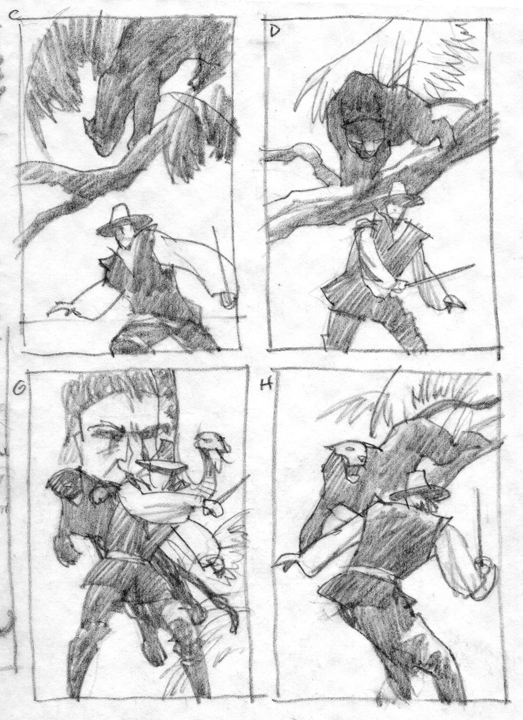 There’s that thing I do. I can see it. My thumbnails didn’t get better until I embraced it.

Surrender
Years ago, when I drew I could always tell it was my drawing. I always seemed to do ‘that thing’ that I didn’t want to do, but it came out anyway. It was mostly based on a lack of drawing skill. I just needed to develop and train.

When I did, I found it was my own personal view of things, but because I had trained hard, I could now embrace that look and drive it.

Give in to the thing that stands out about you. We all have something like that. Something we do that says it’s ours. I suspect you know this. Surrender to it.

In the middle of trying to find my way, I realized my brushwork had even more ways to go.

This is how you learn. Stop the insanity of trying to be creative, to come up with ‘the next best thing.’ It doesn’t work that way. If you are more in love with being recognized, then you aren’t painting. You just want to be a star, not a painter. 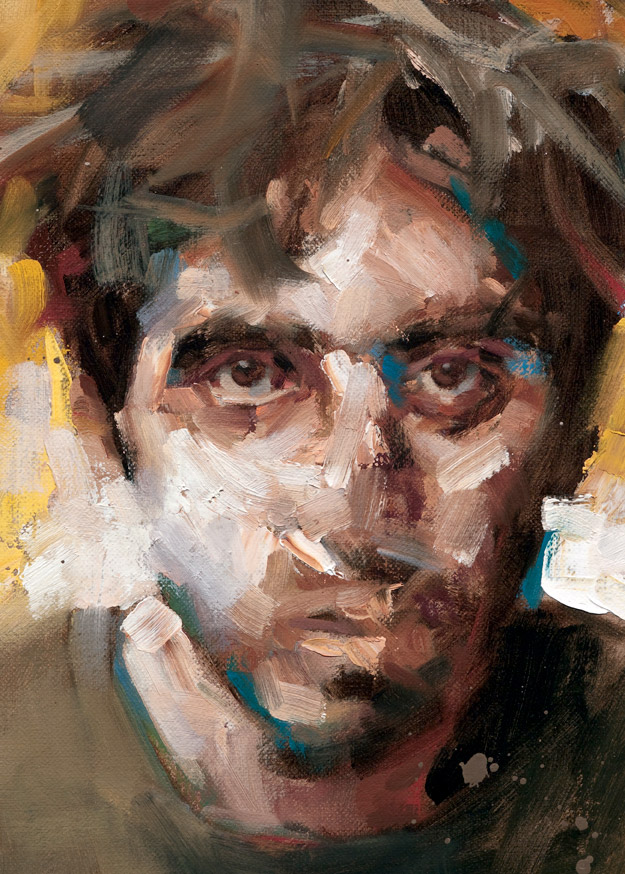 Letting it all hang out for a client, putting my quality on the line, and discovering new pathways.

Risk
The ancient Ninja of Japan (oh, you knew I’d bring that up at some point) embodied all of those words above. They were nothing if not patient, too. But the one thing they were extremely good at was risk. Recognizing opportunity and acting on that chance was a practical method for them.

The ninja marveled at how life presented crazy opportunities all the time, if only they could detect them. They studied it at length. They developed an eye for the right moment, an opening, a possibility. They had rehearsed and were prepared ahead of time to act on it.

Ninja agents would go on missions with the clear understanding that they would die. Because they were willing to risk it all, they stood a better chance of accomplishing the mission.

It is a hard thing, risk. Scary. Yet I remember that more often than not, things turn out to be worth the risk.

Huh? Ohh, stop it. Go get another piece of canvas. It’s not like you’re on a ninja mission or something. Jeeeez. 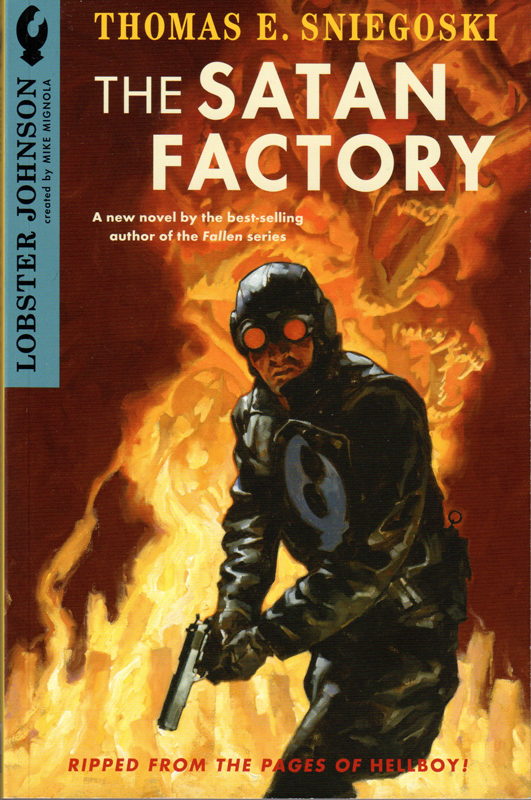 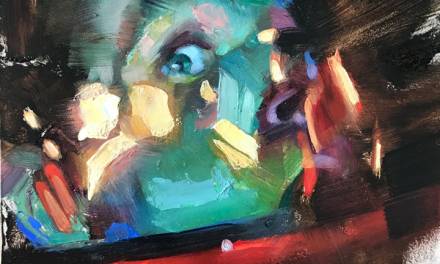 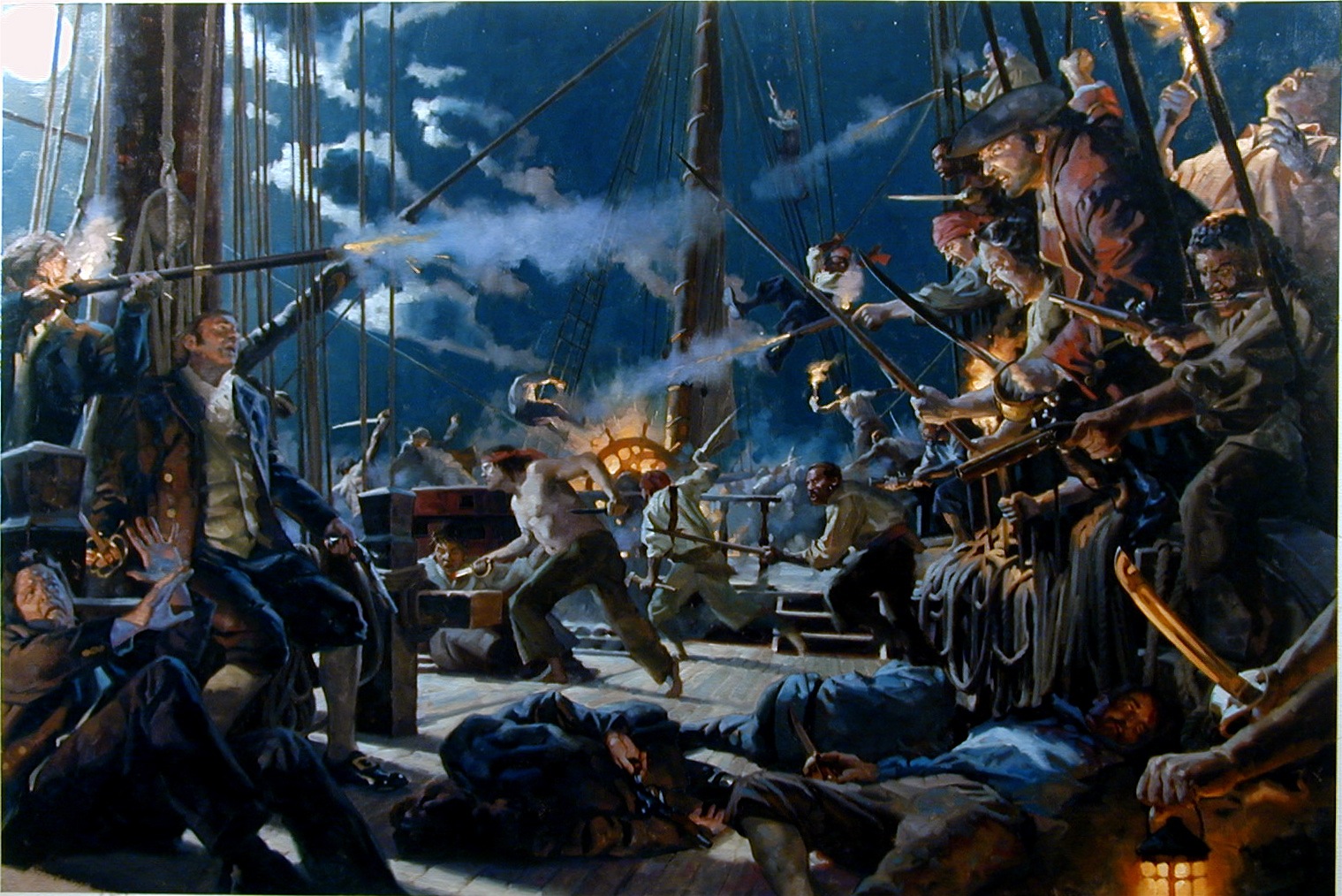 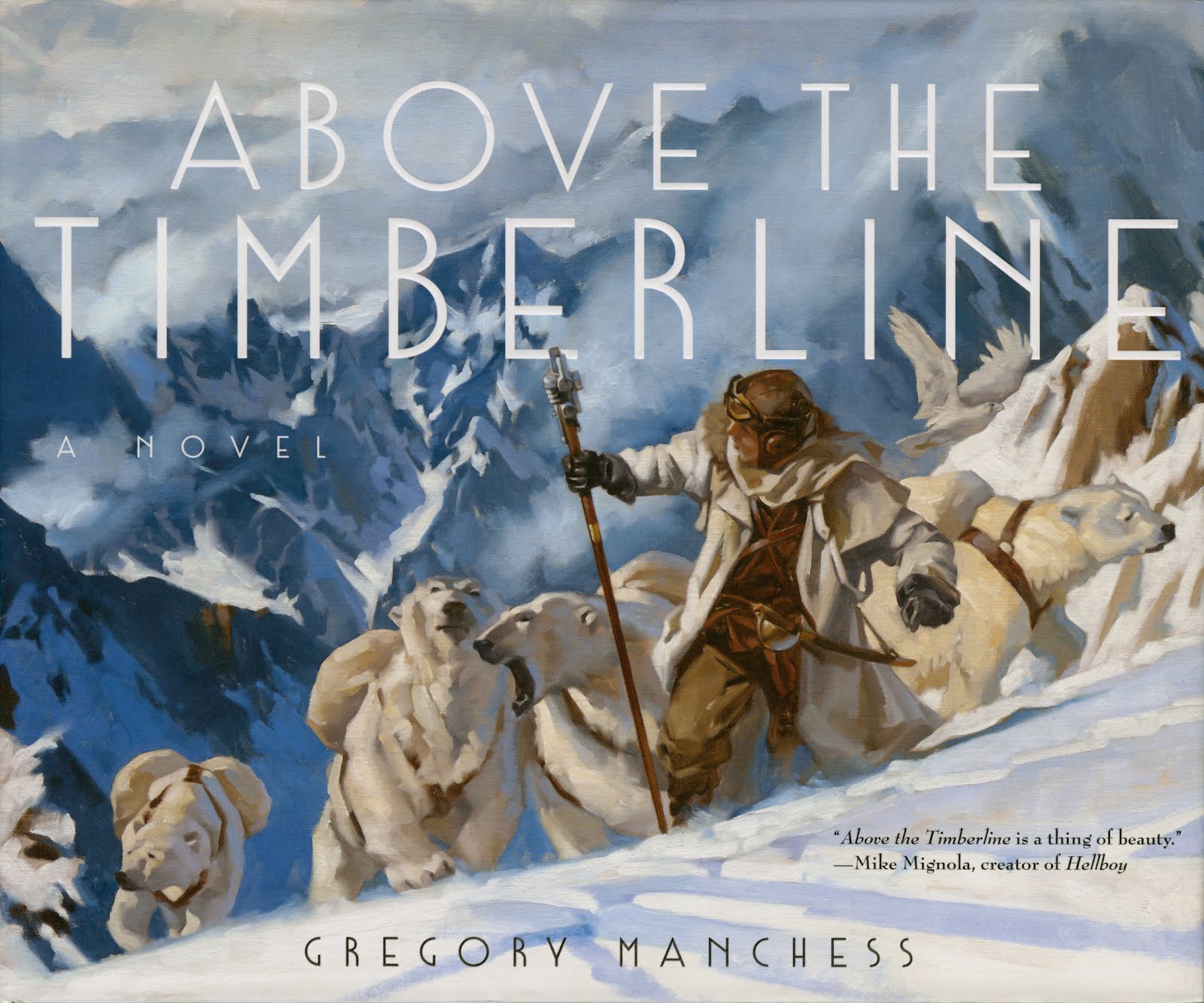