“Kinuko Craft is a Renaissance woman. By this I mean not that she paints like the Renaissance painters, but that she is an artist for all seasons, for all kinds of subjects, and in all kinds of styles. If you will survey her works, you will find little duplication in form, color or texture. She fits herself to her subject with charming ease and yet leaves herself free to remain herself. There is an air about all of her illustrations of one who is a true connoisseur of art, wide-ranging through all the countries of the world. One cannot help but think how delightful it would be to walk into gallery of her kaleidoscopic talents.”
—Ray Bradbury 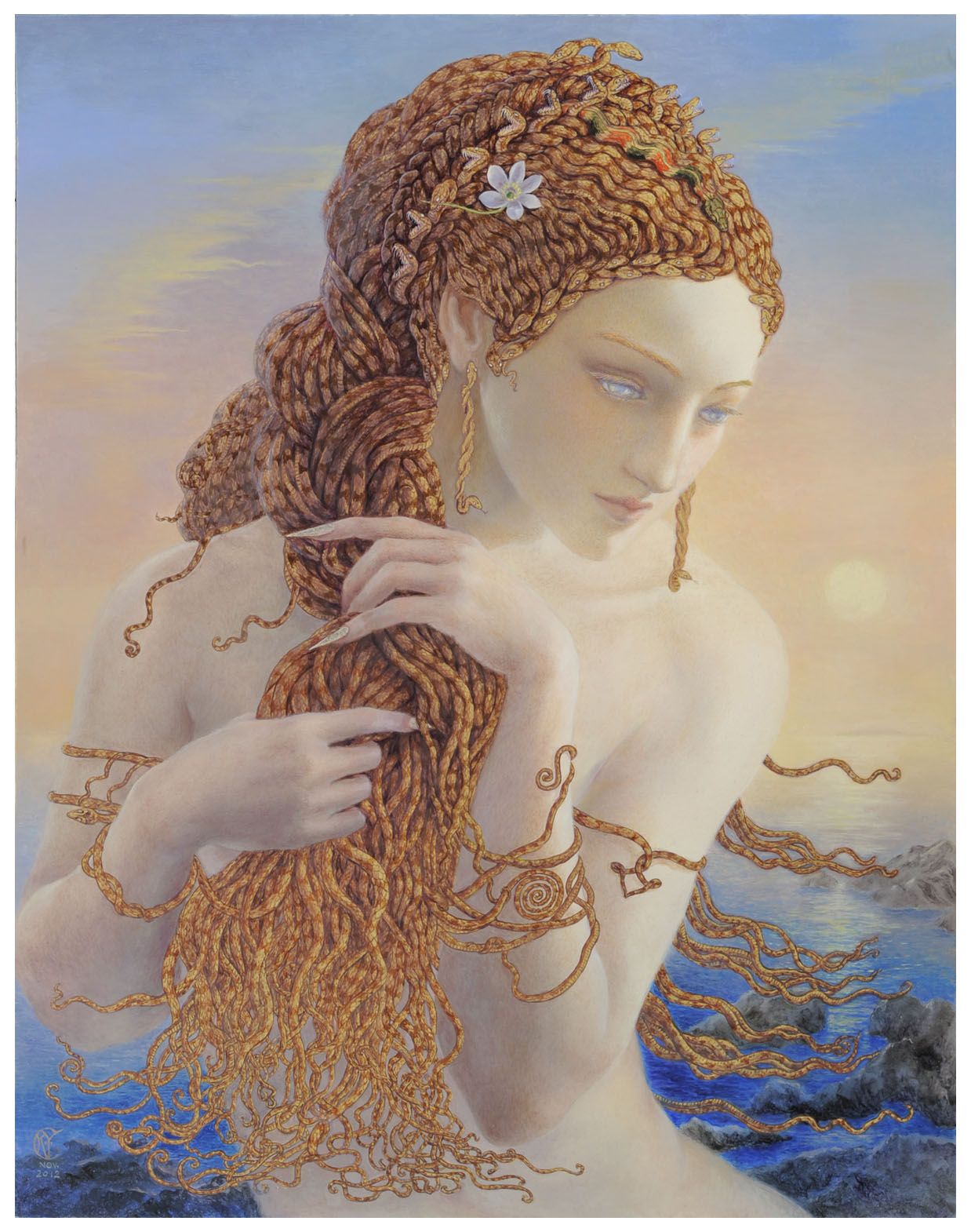 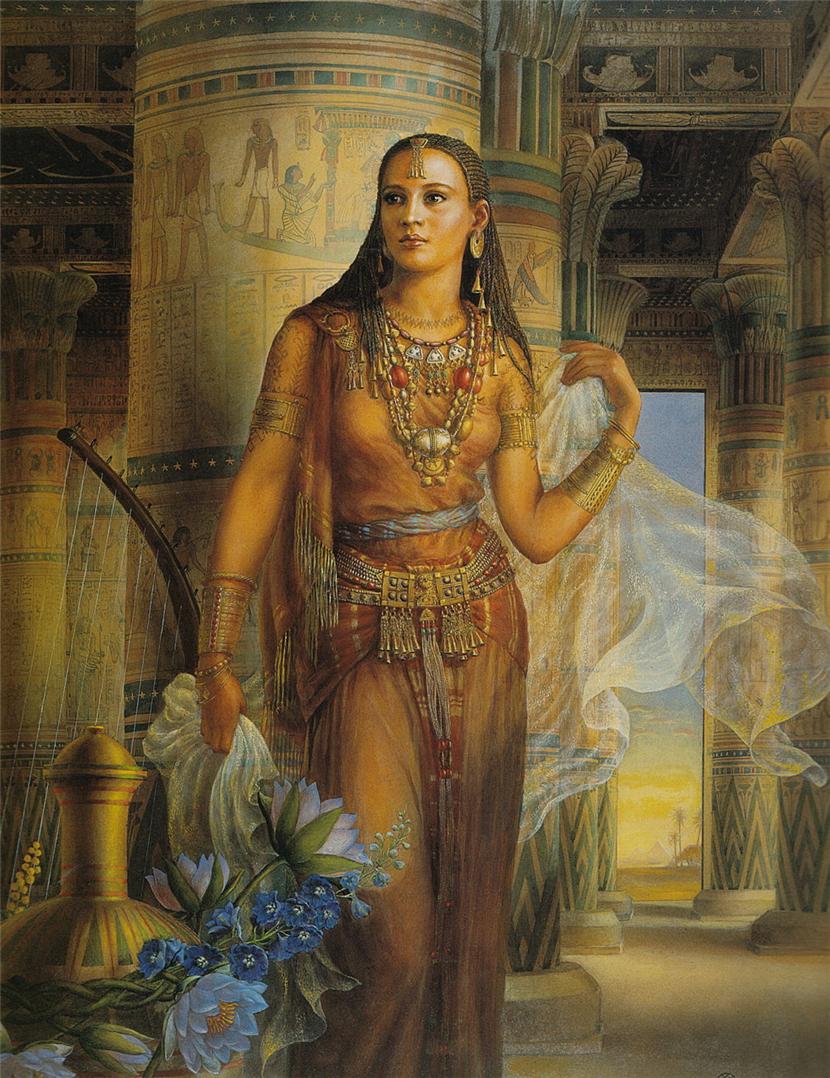 This August the World Science Fiction Convention—MidAmeriCon II—will take place in Kansas City. I’ve been to a few World Cons in my time (my first being the previous one in KC—yow!—40 years ago) and they are, without exception, eclectic and memorable events (in ways both bad and good) that are inevitably worth the time and expense.

They’re a different beast entirely from the mega-pop culture shows now overpopulating the weekends these days (though the whole concept of cosplay really did start at the first WSFC in 1939), much more intimate, much less hectic, and, admittedly, fairly cliquish—which is why the regulars routinely fuss and feud among themselves while clustering in groups and clucking about the newbies or youngsters or upstarts who don’t exactly share the same FIAWOL (the anacronym for Fandom Is a Way of Life) traditions. Which is also why the newbies, youngsters, and upstarts gather in the bars to warily eye the oldsters and establishment-types and SMOFs (Secret Masters of Fandom, of course) while making snarky comments. All of which actually adds to the entertainment, much like sitting back at a family Thanksgiving and watching all the distant aunts and uncles and nieces and nephews get plastered, slap on the boxing gloves, and put on “a show” fighting over decades-old differences of opinion, slights, and insults—before ultimately kissing and making up and singing ribald songs together. There are always great things to see, great people to meet, and great conversations to be had. I’ve never heard of any World Con in which something awful or wonderful or infuriating or ridiculous or heart-warming or stupid or uplifting (or, most likely, all of the above) didn’t occur.

Anyway, for many years World Con was virtually the only place to see—and perhaps purchase—the best examples of f&sf art the field had to offer. Anyone who was anyone (or was going to be anyone) made a point of exhibiting in the art show. Now, well, there are other outlets and avenues for artists (like • cough * Spectrum Live) that are a bit more representative of the breadth of today’s creative community—but World Con still features a varied art show, hosts the Hugo and Chelsey Awards, and features an Artist Guest of Honor.

This year’s guest is Kinuko Y. Craft. They could not have made a better choice. 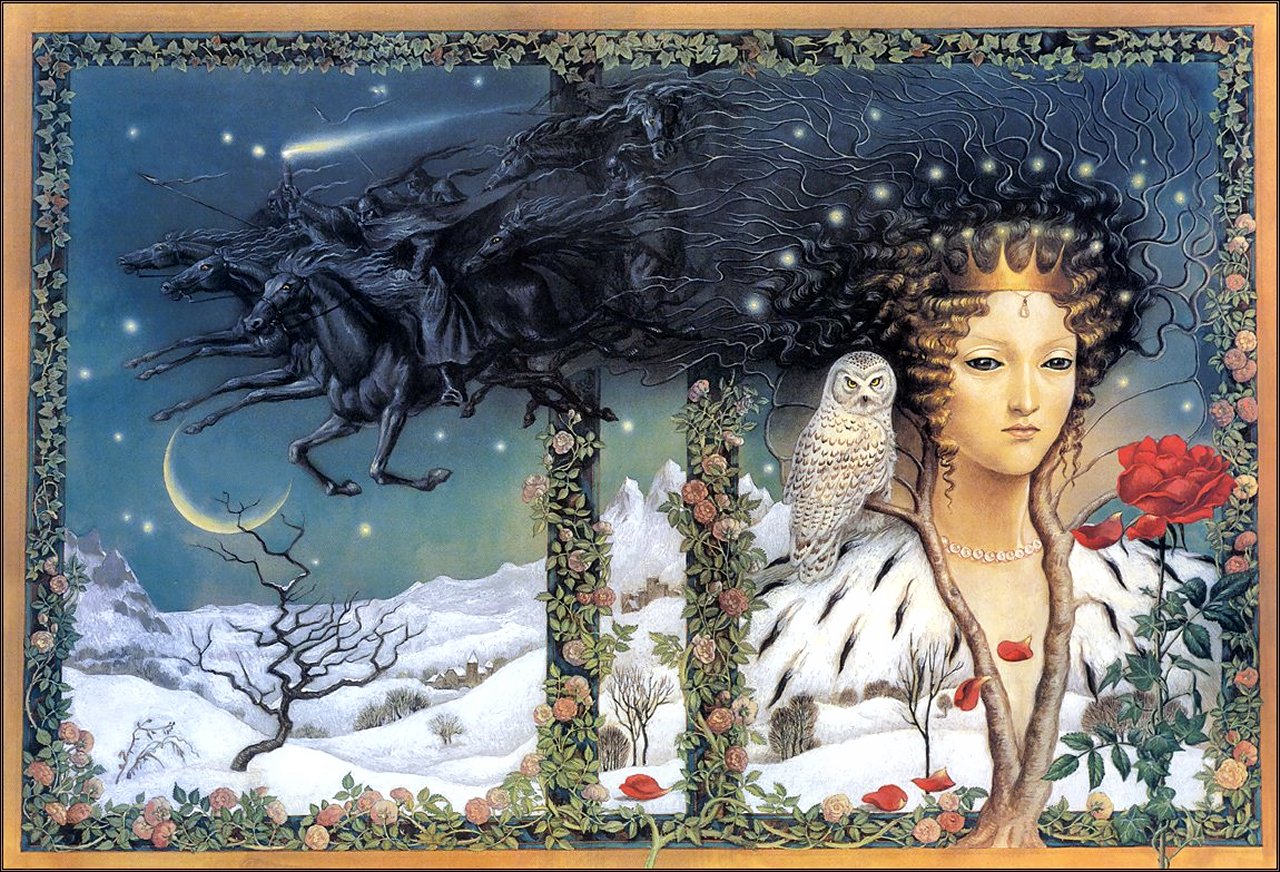 ‘‘I think you’re born a dreamer, born an artist. I was captivated by my maternal grandfather’s art books. He was a calligrapher – among many other skills, a real Renaissance man – and he shared his art library with me. Those were my childhood books. Art of the world. They made a big impression, more than anything else, and gave me a sense of direction.”
—Kinuko Y. Craft
In many ways I think Kinuko is the epitome of everything that a Fantastic Artist should be, everything that others working in the field should emulate. Intellectual, industrious, focused, and unbelievably skilled, she embraces challenges that others shy away from. Whether the theme is mythic or futuristic or political or erotic, whether the tone is serious or humorous, Kinuko’s art always succeeds with confidence, beauty, and grace.

She is an ambassador for our field—and provides proof to skeptics that, yes, contemporary Fantastic Art, narrative art in whatever guise it takes, is “real art.” Kinuko has exhibited in galleries and museums around the world, she has lectured at art schools and universities, her art—for everyone from Time to Sports Illustrated to the Dallas Opera and beyond—has inspired and influenced creators of all ages. It’s no surprise that she was selected as the Spectrum Grand Master in 2002 and was inducted into the Society of Illustrators Hall of Fame in 2008. Kinuko is, literally, a Queen of Art. 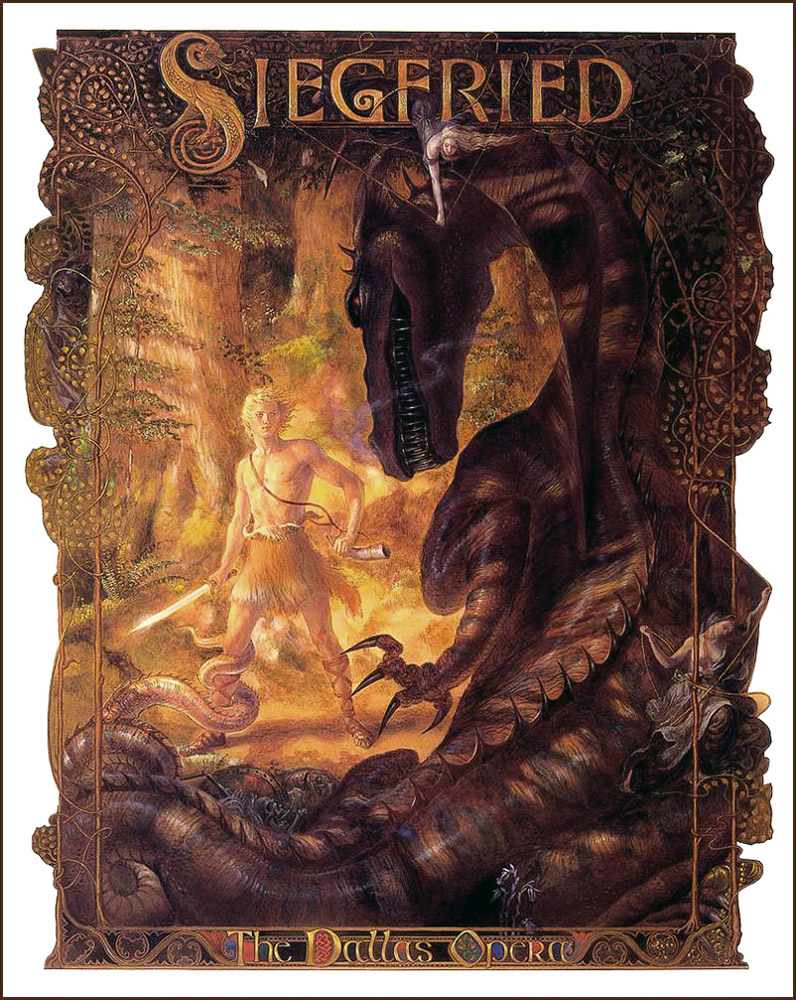 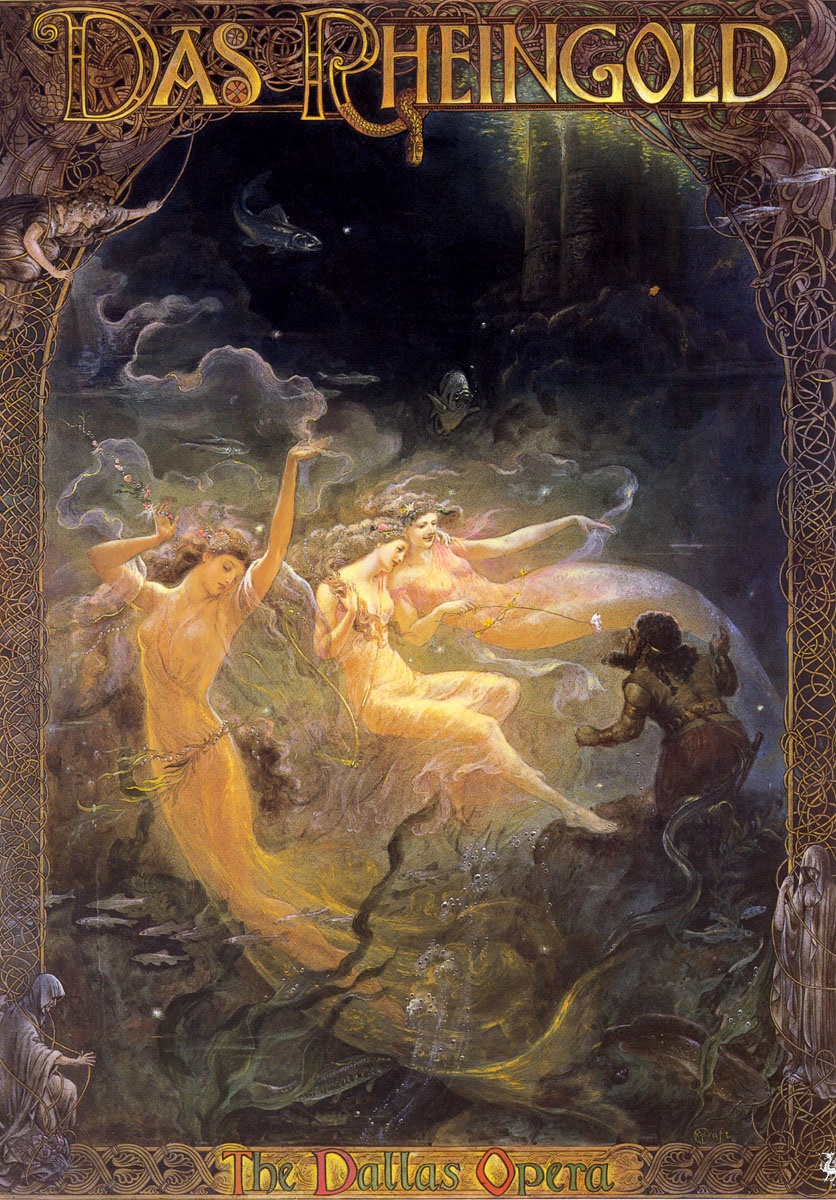 ”I choose my jobs by instinct, by my reaction to the theme or manuscript. It must have a welcoming sensibility. The writer’s sensibility must meet me half way. There must be room for my imagination, for my heart. I can’t just be a hired hand. If something is not right, if I read the story and it’s like a blank, then I know I can’t do it. If the story is so offensive or alien, or too much for my psyche to take, I will know long beforehand, even before I can take on the research.”
—Kinuko Y. Craft 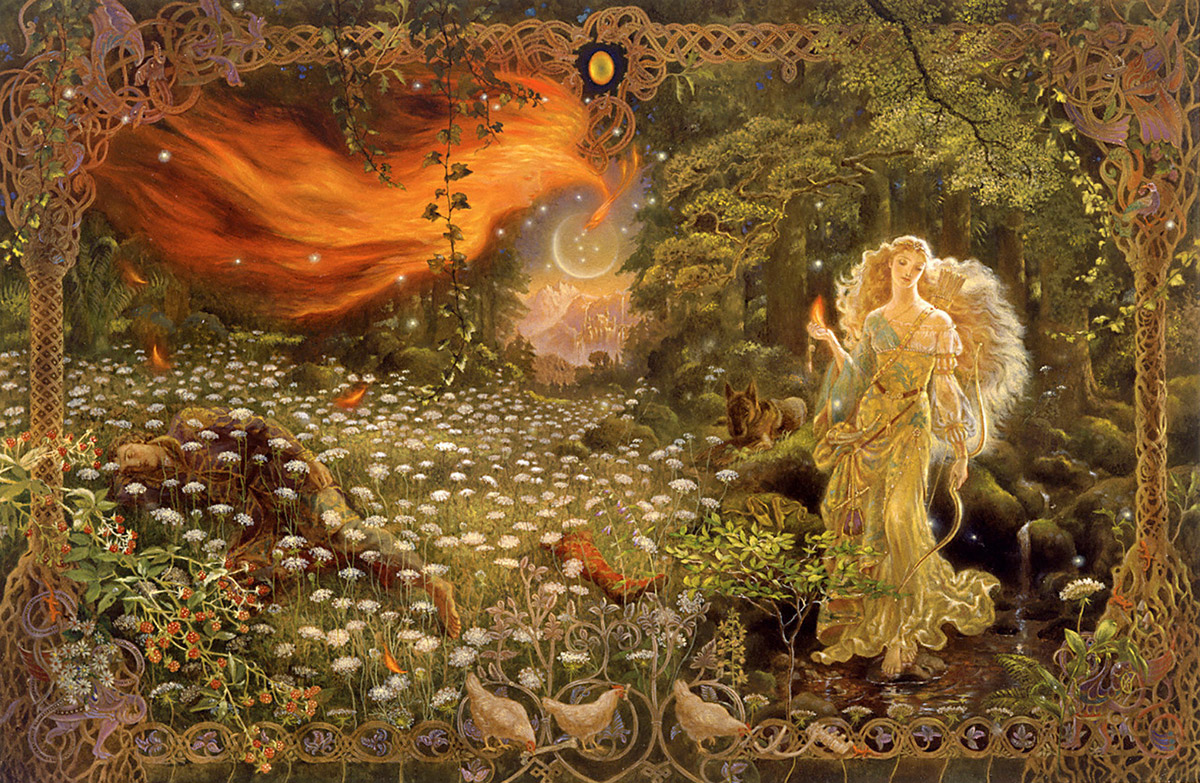 ”Stories have a color, a certain smell and taste. I have to spend time with that, inhabit it, taste it, know it. I want to bring out my fantasy about that flavor.’’
—Kinuko Y. Craft 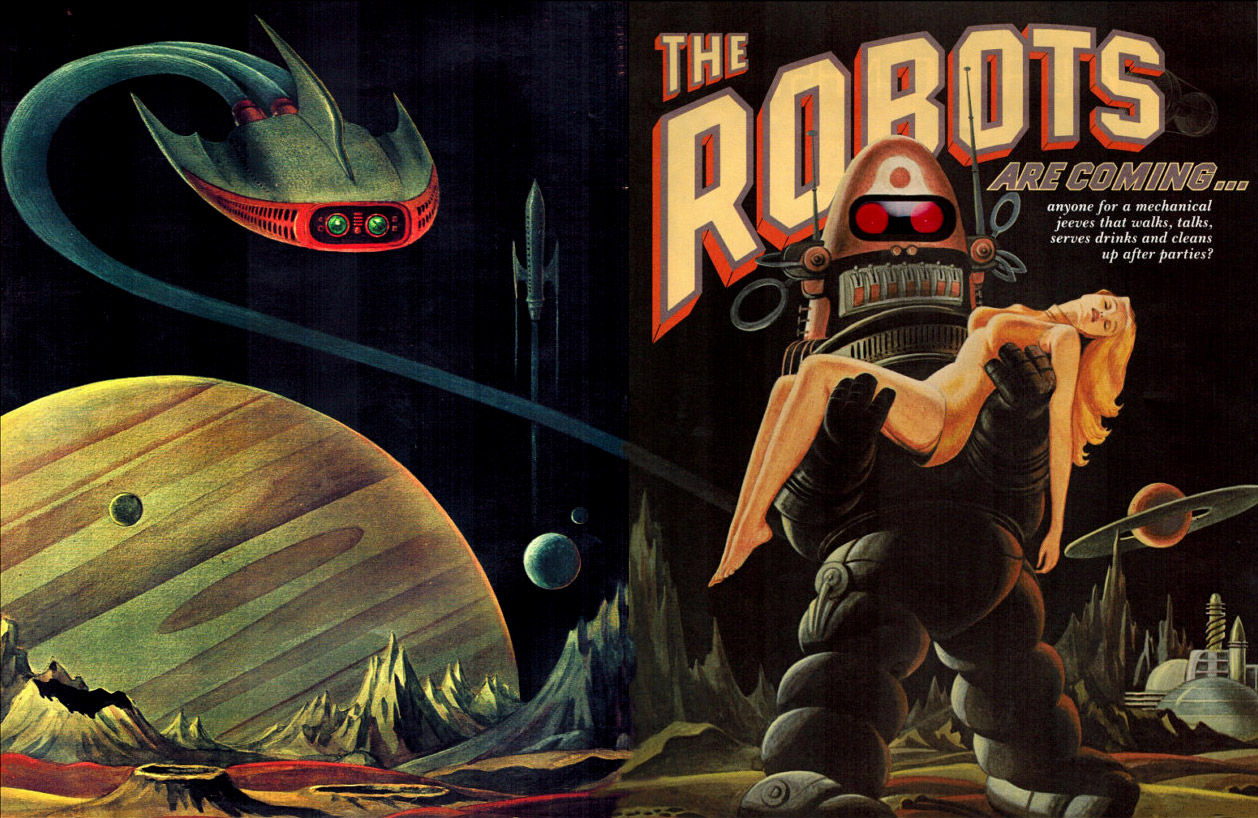 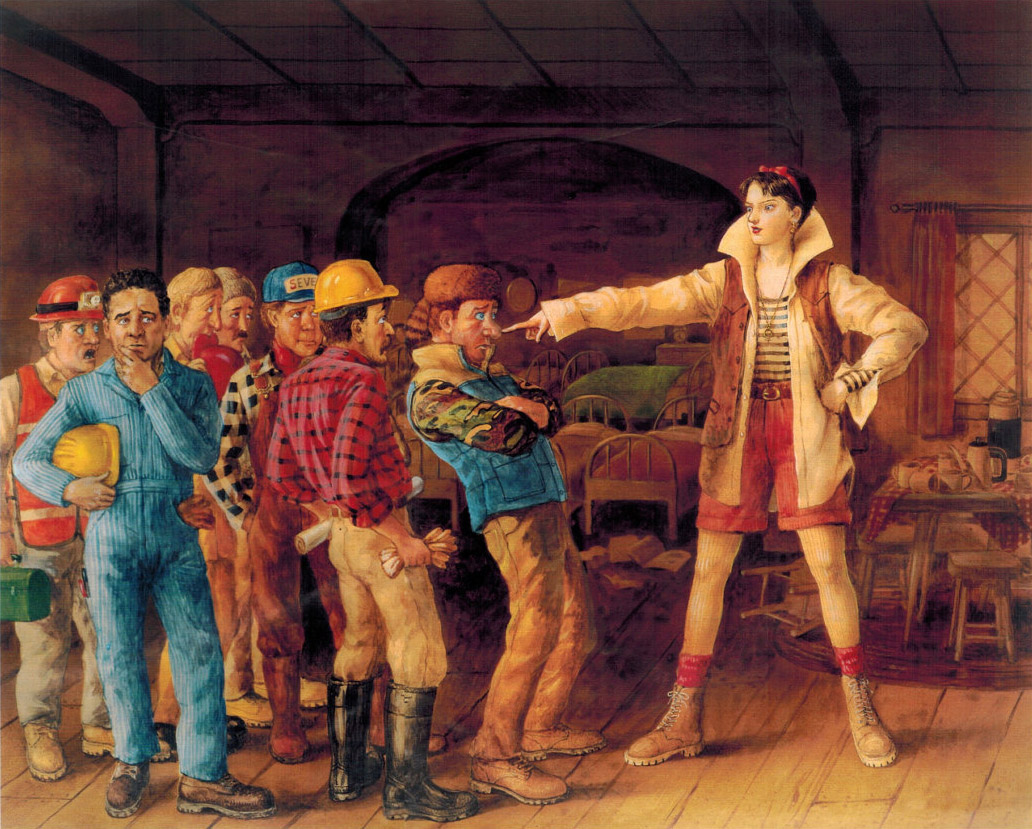 ‘‘My mission is, I really feel, to tell my version of the story. To show my reaction to it. That’s why I spend so much time on it. The more time I put in, the more something lives in the image. I actually live in the book while I work. I function much like an actor taking on a role. The outside world fades away. It can be a real problem, especially when we run low on food during an ice storm, and I’ve just spent twelve hours in my studio. But I think I’ve been in a fantasy world all my life.’’
—Kinuko Y. Craft 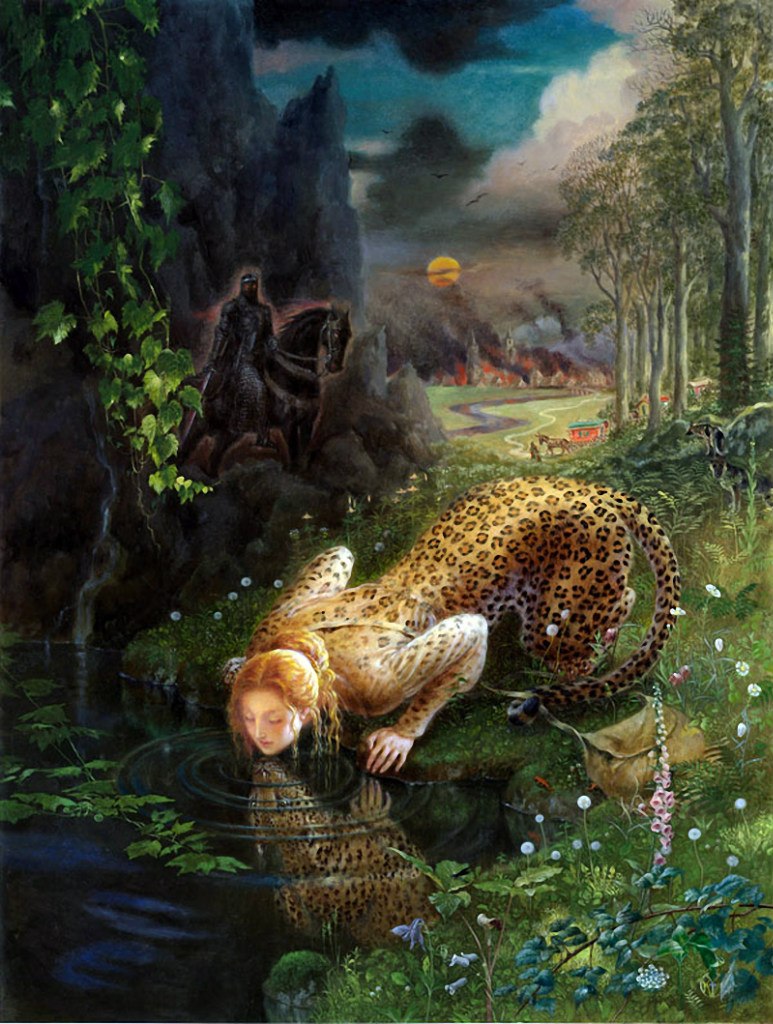 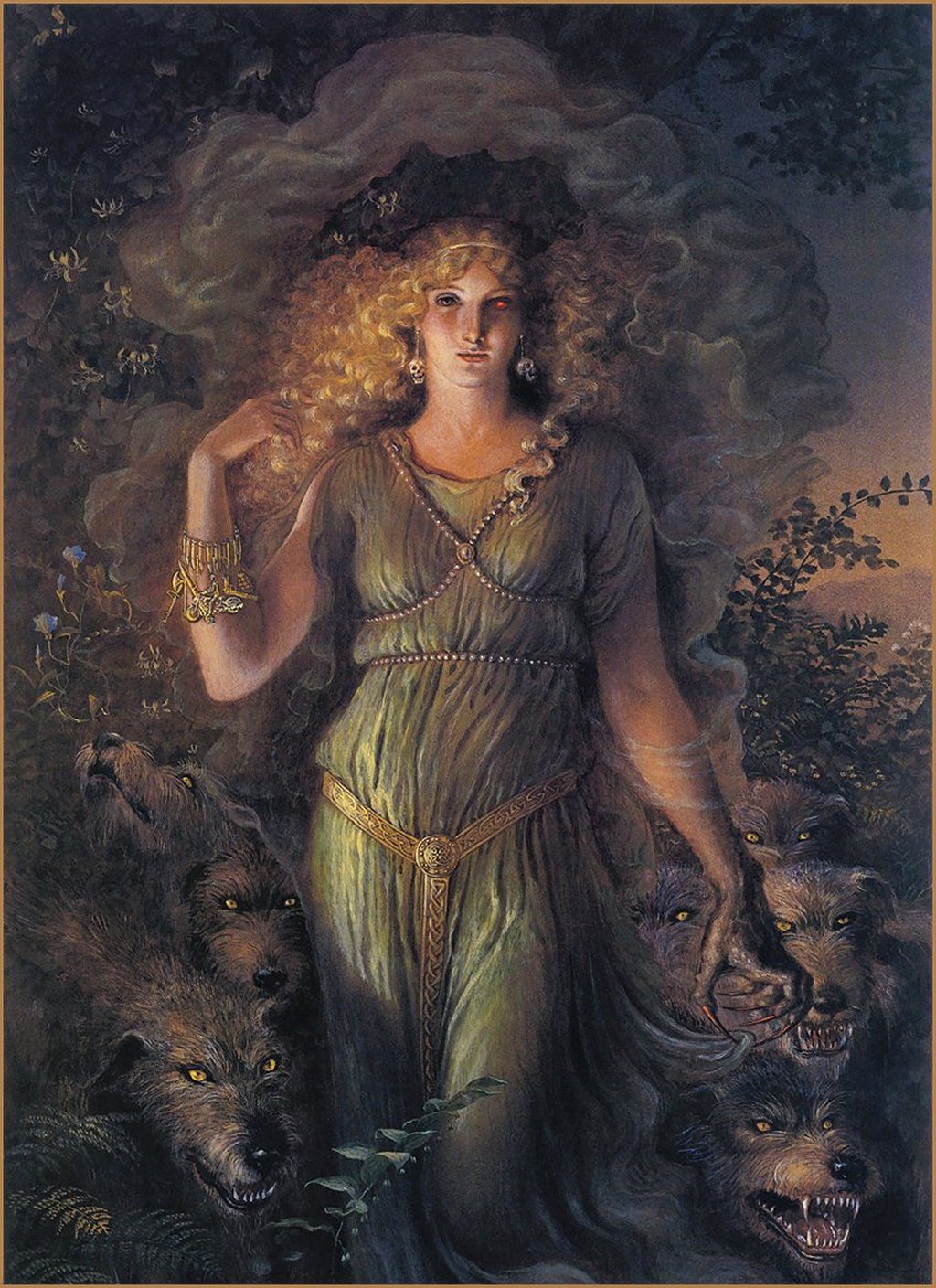 “I completely immerse myself in the story, searching out any possible or attractive images that are triggered by anything I see or come cross. When something finally hits, I start drawing idea sketches. It often takes many, many drawings until I finally find something that seems if it might work.  When I am finally comfortable, I make final, highly detailed drawing.  It is very often quite a long process, but I am the happiest person in the world when I finally find it or it finds me. The rest is osmosis.”
—Kinuko Y. Craft

You better believe that Cathy and I are looking forward to seeing Kinuko and her husband Mahlon in a few short months. And if you’d like to meet her, too—and be able to see an exciting display of her art, perhaps buy an original or print, or ask her to autograph a book or calendar—you can hit the link and learn how to attend the World Science Fiction Convention. 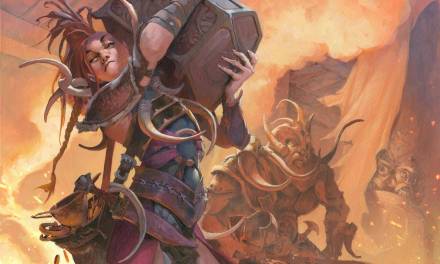 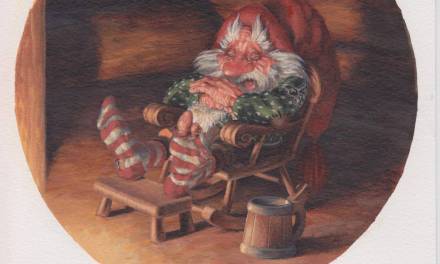 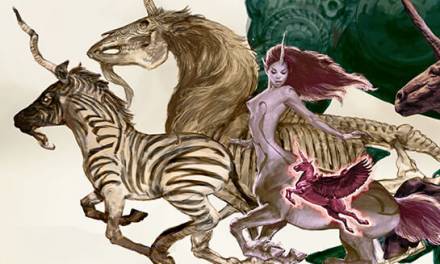