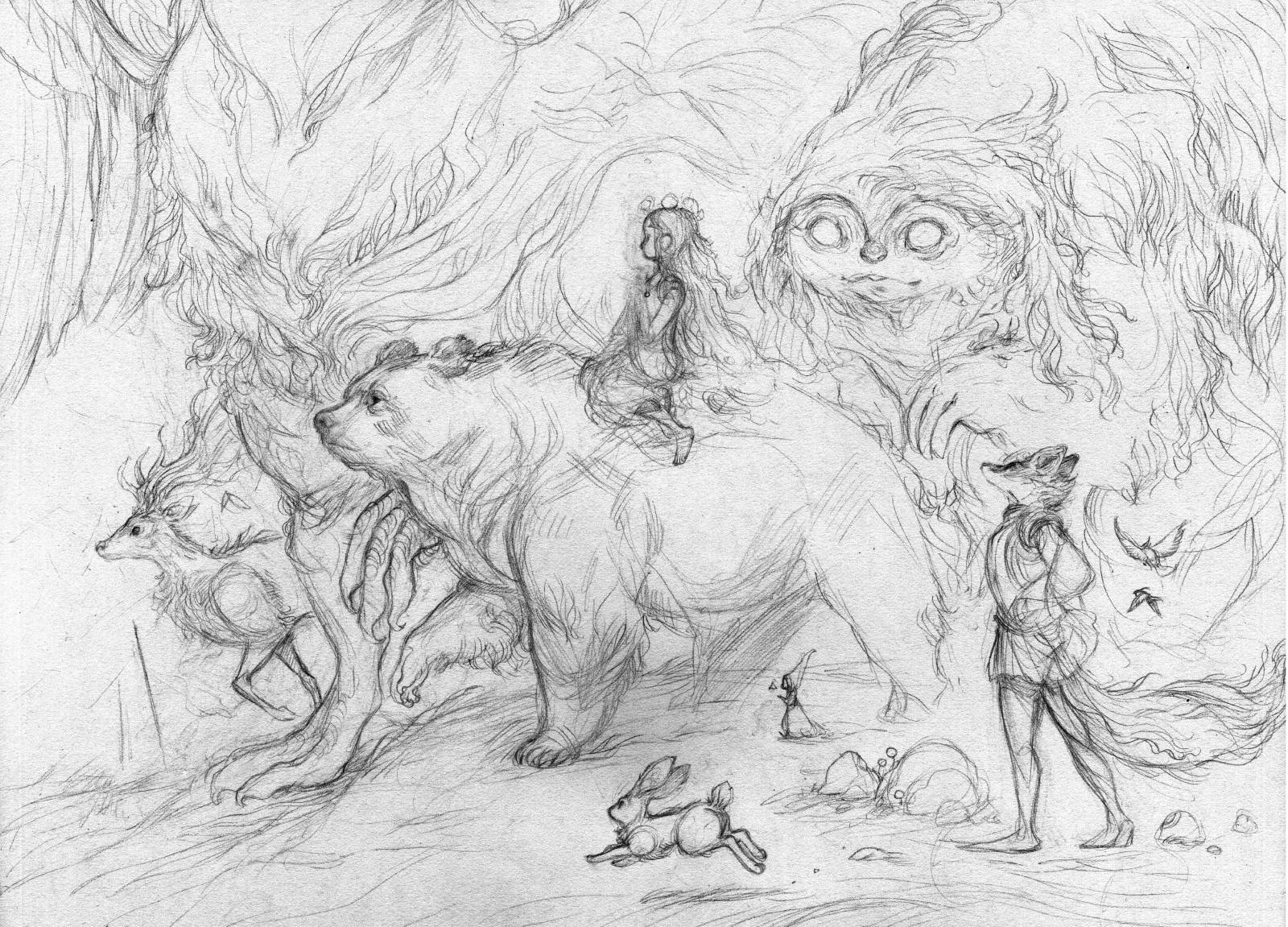 Well now, it’s been a good long while since I’ve done a process post around here!

This will be in two parts. Today I’ll walk you through the initial planning stages and the first pass at the drawing and next time I’ll follow up with the finished drawing (or more, depending on just how far I get in the next couple weeks).

Rarely does this ever happen but the image just struck me. Usually I find the piece by scrawling through thumbnail scribbles but this one just came to me and I figured I’d run with it. 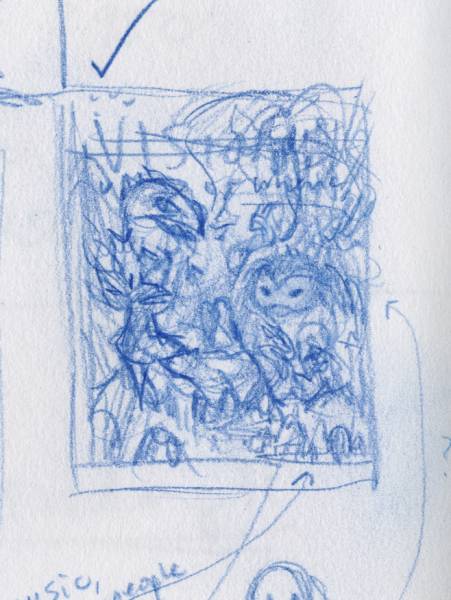 After I scan the thumbnail I’ll begin to work up the shapes and start to think through the values. 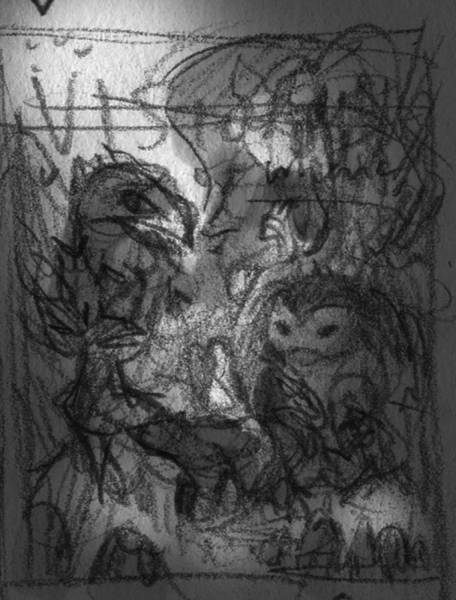 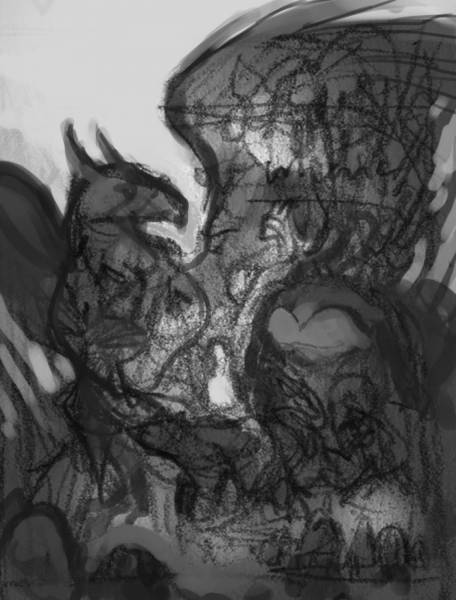 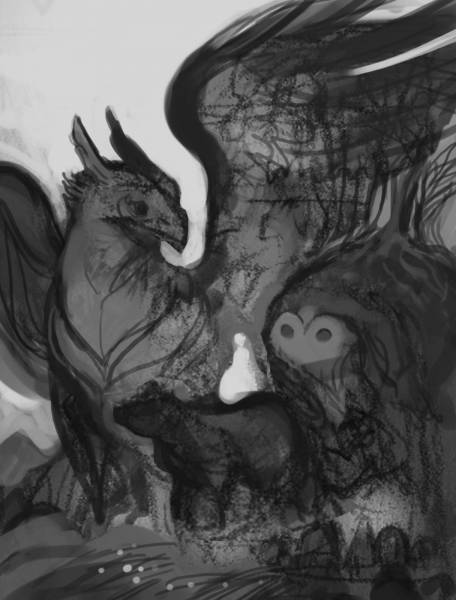 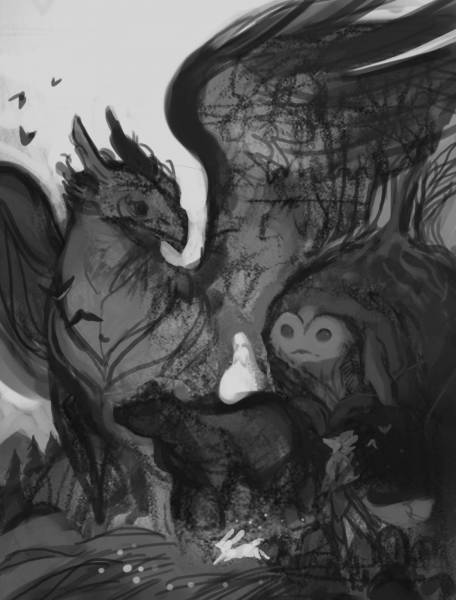 Once I’m satisfied that I’ve got the proportions and shapes figured I’ll move on to the drawing. 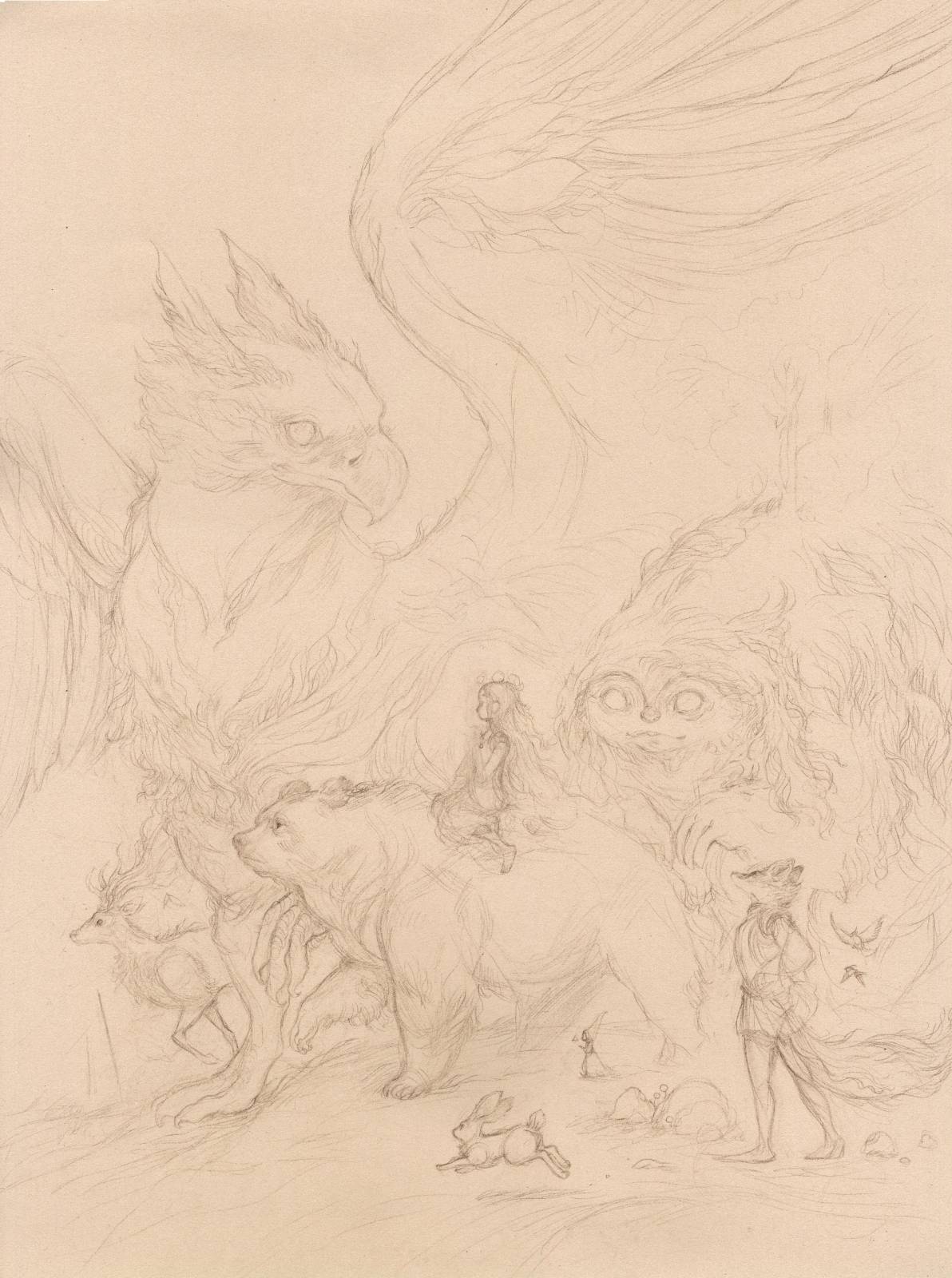 I’m working at about 20″ X 26″ so this one is a pretty decent size. When I’m working just for myself I prefer to work larger because I like the room to stretch out. You’ve got to keep a closer watch on your proportions (which is why I work closely from my digital thumbnail rough) because things can I have a tendency to stretch when you’re working larger. I find that I’m constantly standing up and evaluating my shapes.

Once I have the first pass at the drawling complete I’ll scan it in and think through any changes or adjustments that I want to make. 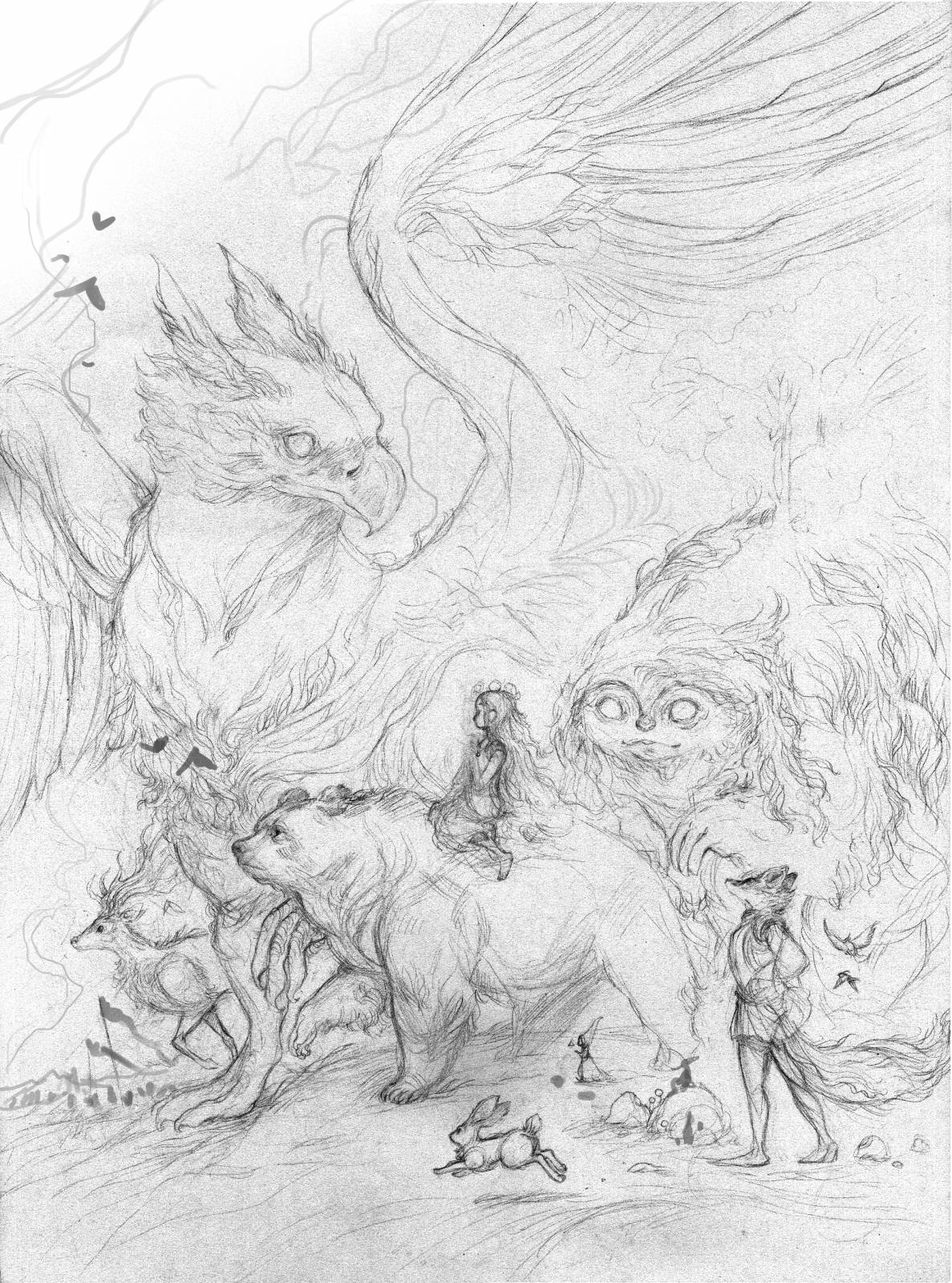 I do this stage digitally purely for the flexibility and speed. Once I figure out what I’d like to do I’ll move back to the original drawing itself.

So what is this piece for?

If you’ve followed my work in the past you may know that I create a new sketchbook on a theme each year. And in fact my most recent sketchbook marked 10 years of this practice.

Something I’ve wanted to do for a while now was to collect my past sketchbooks in five-year collections in a nice hardcover.

While I began this practice in 2008 it wasn’t until 2011 with my sketchbook, The Hidden People, that I found the working method that would shape each of my sketchbook projects to come. Which is to say that 2008, 2009, and 2010 will not be a part of the hardcover. That said, they just might be a part of a stretch goal, though.

That’s right! Consider this a formal announcement that in the coming months I’ll be putting together a Kickstarter for the hardcover collection of sketchbooks 2011-2015, Visions of Whence.

At its heart, this new piece is meant to be a visual celebration of the creatures and themes from these five sketchbooks. A quick glance at this drawing in progress should reveal what each figure represents and which sketchbook they call home. I think this is a first for me, taking a collection of various characters and figures that I’ve drawn in the past and placing them together in one image. 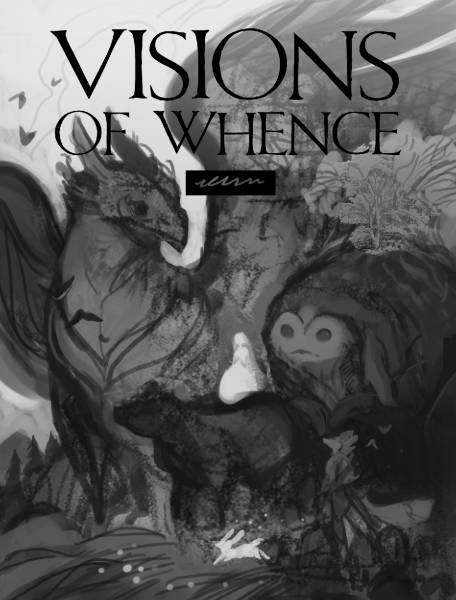 Enough of this for now, I’m on to the finished drawing. I hope by the next time we get to talk I’ll have even more to show from this project! 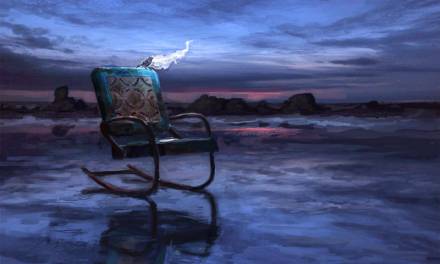 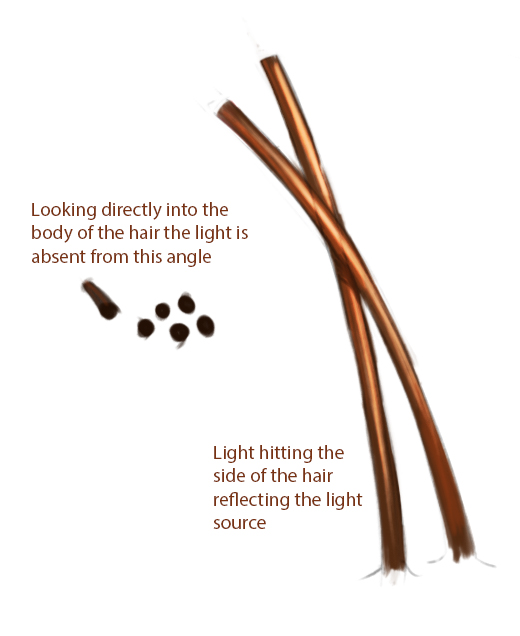 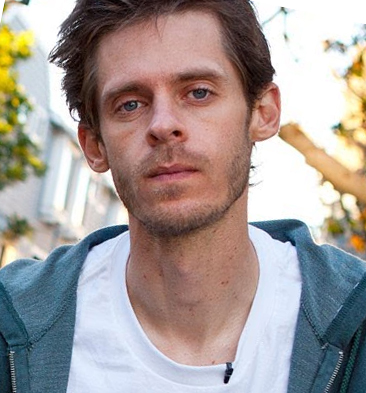