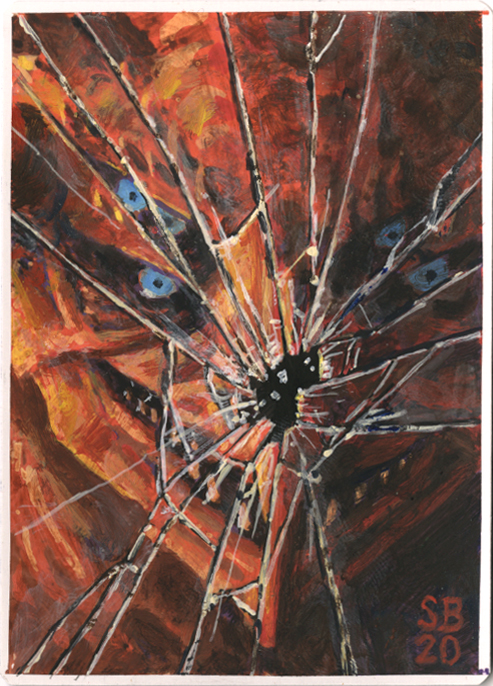 There are a lot of things I could say about the times we find ourselves in, but I figure I’ll spare you the brunt of it since I think we’re all pretty well steeped in things at this point and I don’t have much to add. I’ll keep it to two, quick things. First, even in the best of times there are occasions that I look at the work I do and see little to no point in continuing to do it. The circumstances we’re all in do nothing to assuage such a mindset. However, it’s important to note that the very things that are getting many folks through are rooted in the arts—be it books, comics, movies, video games, what have you. Depending on the person, these things may or may not be vital, but I think they are inarguably important. What we make has an affect on people. Even if only for a moment. And the making of the things themselves can offer relief to the creators.

Second, each of us will have days that hit us harder than others. Do not be afraid to ask for help, for an ear to listen, for some words of encouragement from your fellow creatives. Conversely, if you’re able to lend aid, an ear, or some encouragement, don’t hesitate to put yourself out there. The creative community at large has been immeasurably important to me mentally and emotionally throughout the years and I’d be lying if I said that I wasn’t depending on it now more than ever.

That aside, I want to talk about keeping busy. I’ve touched upon (or spoken directly about) this in previous posts, but I think it’s important to talk some more about it if you’re inclined to indulge me. Left to my own devices, I will shut down and become obsessive about the news, the the numbers and figures, the swirl of it all. Before I know it, I end up doing what I’m best at: nothing. And so I find that if I have no assignment, I need to make one.

For me, self-assigned projects cannot be groping explorations, though they can have elements of exploration and discovery, which I think is important. But I need a goal, a target to shoot at in order to burn off the nervous energy in a meaningful way. Without a target, the meandering can become unproductive and a lack of productivity can ultimately result in my mind drifting back to the news, the numbers, the data.

Last month I wrote about my weird sliver drawings (here). It was a fun exercise and one built around clear goals. I wanted to push myself further and continue the experiment, but also bring it a little bit closer to what I do in my illustration work. I decided that the thing to do was to pull out my acrylic paints and see what I could do on the backs of normal Magic: the Gathering artist proof cards (which are unprinted on one side, leaving a perfectly empty white void to impose my will upon). Again, these are small efforts, but they’re packed with lessons, and honestly I hadn’t used acrylic paints for anything approaching finished work in twenty-three years. Seemed like a nice opportunity to reacquaint myself.

However, I also wanted to test a mixture of mediums. The color sliver drawings I did were mostly accomplished with acrylic paint pens. Would the paint pens play well with actual acrylic paint? I decided to find out.

I began with landscapes. They seemed pretty safe and also involved a pretty limited palette (which became necessary as I began opening tubes of acrylic paint that had been unused for decades (and some of which I can trace back to the 1980’s—where’d the time go?). 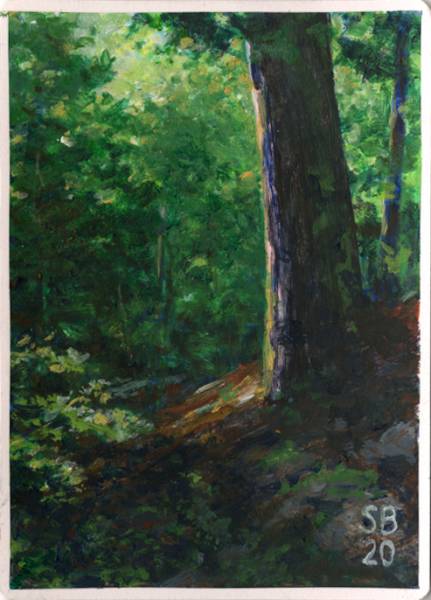 As with the sliver pieces, I tried to paint things that related in some way to what was on the front of the cards. In this case, it was a painting of a forest. So, yeah. I painted…a forest.

So basically, I blocked the whole thing in with Posca acrylic paint pens. I used a dark green, a light green, a violet, a brown, and a pale yellow. After they were dry, I scratched at the paint with a fingernail to make sure the markers had good adhesion to the slick paper. They were fine. So then it was on to painting acrylic on top of them. As the paint dried, I again tested it with a fingernail and was unable to scrape away the paint. Beyond that, the piece didn’t go as planned. While the paint itself worked fine, it turned out that I didn’t have any acrylic colors that even came close to the vibrancy of the paint markers. So I basically was forced to rework the entire piece anyway. On some level I was hoping that the paint markers would provide some degree of time savings, but that didn’t work out the way I’d hoped. I didn’t use them again after that. 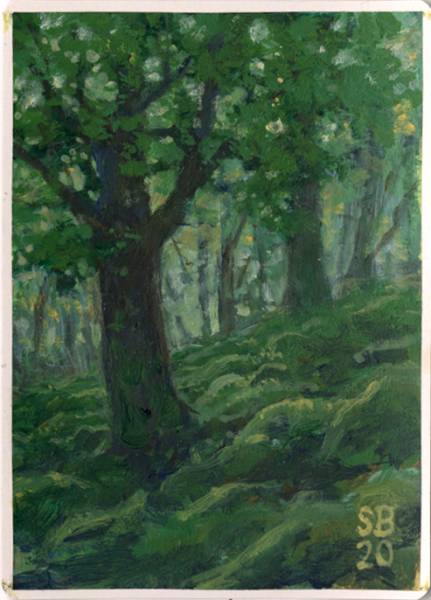 Again, a forest. Only this time, all in paint. 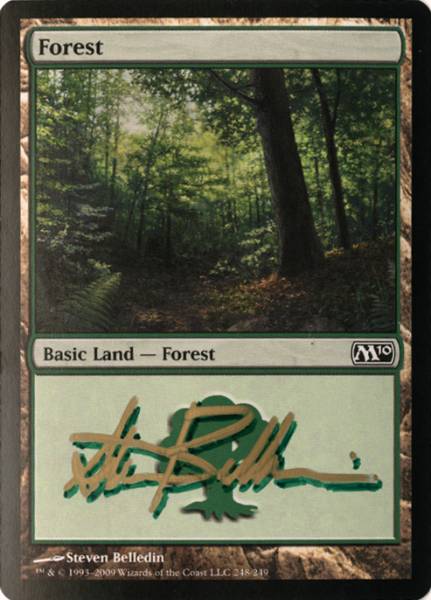 For reference, this is what the other side of the paintings above look like.

I’m not sure why I settled on forests (beyond the fact that I have a ton of Forest artist proofs). I find forests comforting on some level, I guess and I feel comfortable painting them. Either way, it seemed like the perfect subject matter for getting used to how acrylic paint works. 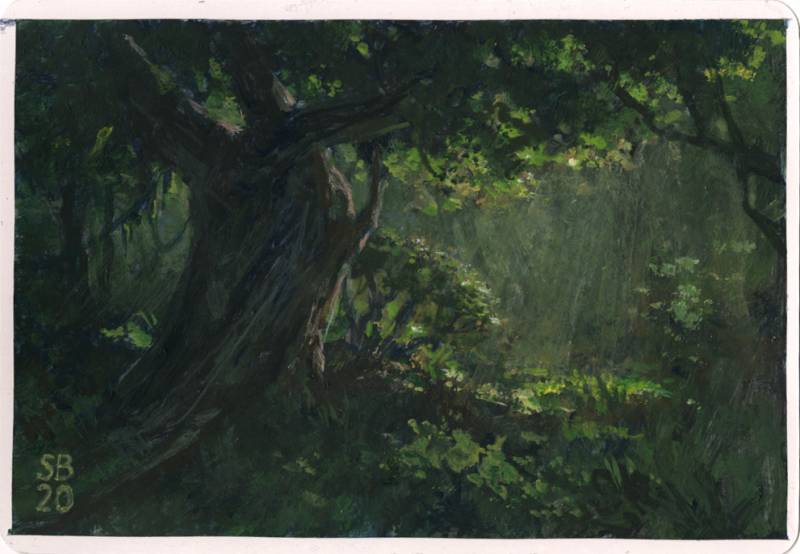 Yet another forest. But this time, twice as large and horizontal. 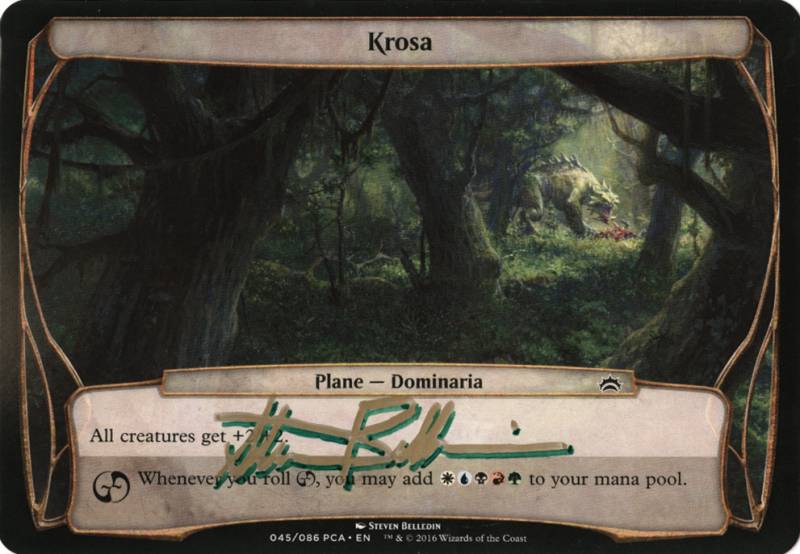 Again, the front of the card for context.

With the forests under my belt, I decided to try a different kind of landscape. I’m not really sure how effective these next two ended up, but I had to fight with both to bring them home. 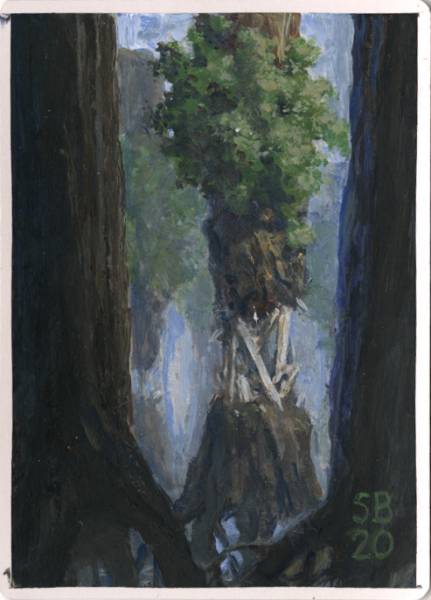 This is based on a piece I did called Evolving Wilds, which depicts a weird fantasy landscape of columns that contain multiple biospheres throughout their height. There’s a lot of detail to try and cram in there, and I’ve always had trouble doing fine detail work in acrylic. I have not magically gotten better at doing it after all these years. 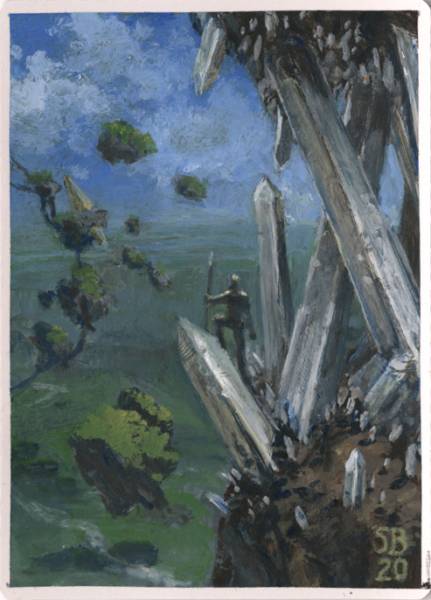 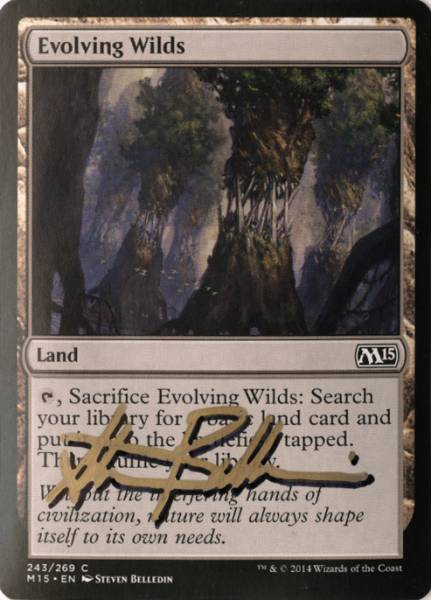 A closeup of one of these pillars. I reworked this more than I ever should have had to. But whatever. I got something out of it in the end.

Finally, I decided I wanted to tackle something a bit different, so I settled on a couple of shots of a goblin character called, Kiki-Jiki, Mirror Breaker. Shockingly—at least as far as I’m aware—he’s never been depicted with actual shattered mirrors. So I decided to fix that. Or try to. 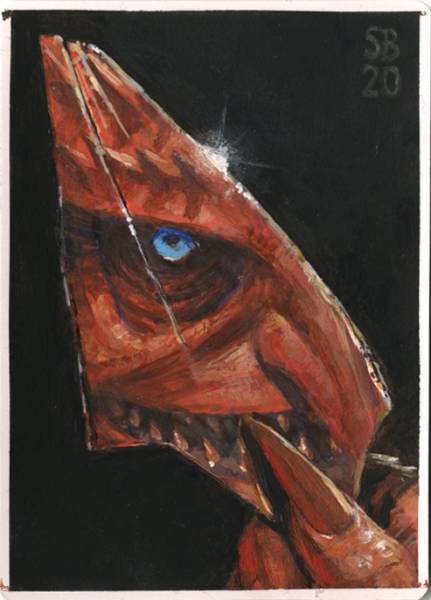 A pretty straightforward take on the little goblin reflected in a mirror shard. 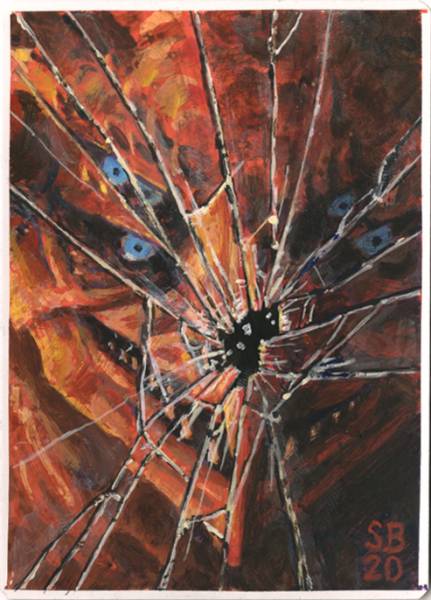 I decided to turn the broken mirror up to eleven on this one. It’s not entirely “correct,” but it was fun to do and I’m pretty happy with where it landed. 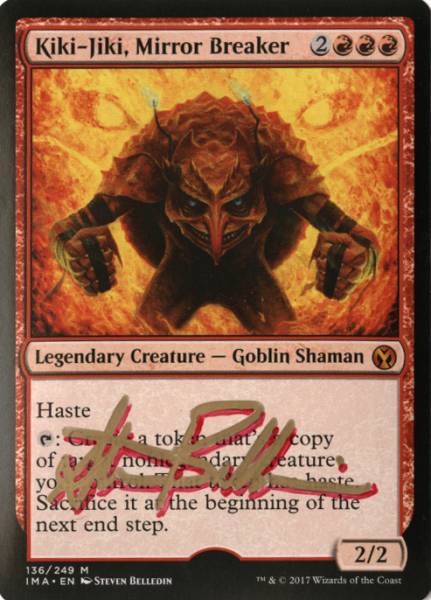 And here’s the guy in all his glory.

Technique-wise, all the fully painted pieces were done exactly the same. A few quick pencil lines followed by a thin block in done with watered-down paint. I got progressively thicker each pass with the paint and most of them were done in three or four passes. Also, each card was taped down using Scotch Magic Tape in order to reduce the amount of curling the paper might do. Results were mixed, but generally they survived okay.

Whether or not the paintings achieve anything approaching greatness is kind of moot. The point was to use a medium I wasn’t used to and make something out of it. Again, by revisiting old works, I could assign myself variations on a theme. There wasn’t a ton of pressure, but there was a clear goal. Minimally they’re a good exercise. But they could also be turned into a means of making a couple bucks, which admittedly I did.

Two more notes. First, as I stated previously, my paints were old. The oldest ones—you know, from the 1980’s—were all junk. Dried solid, not surprisingly. The rest dated from the mid to late 1990’s. If you’re like me and want to own paints that you won’t touch for a decade, here are some things to consider. The brands I owned were Goldens, Liquitex, Windsor & Newton Finity, and Pebeo. All of the Pebeo acrylics had to be thrown out. They were gummy at best, solid at worst. One tube of the Liquitex had to be tossed because it had separated into globs of paint and a weird, gooey substance that was impossible to work with. One tube of Windsor & Newton Finity had to be tossed due to its becoming almost granular in texture. Beyond that, the rest of the Liquitex, Windsor & Newton, and the single tube of Golden’s all seem totally fine.

Second, as I was on an acrylic kick, I then decided it was a good idea to dive into my next paid gig using only acrylic paint. I did it, but I don’t think I’m going to be doing it again anytime soon. Unfortunately I can’t say more than that for now. Until then, I’m going to get back to making more problems for myself to solve, and finding ways of focusing and being productive. Maybe I’ll give a different medium a try. Gouache maybe? Watercolor? I guess we’ll see.

In the meantime, much love to you all, and stay safe as you can. 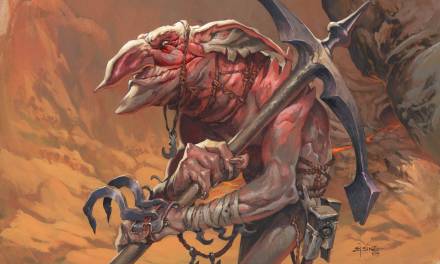