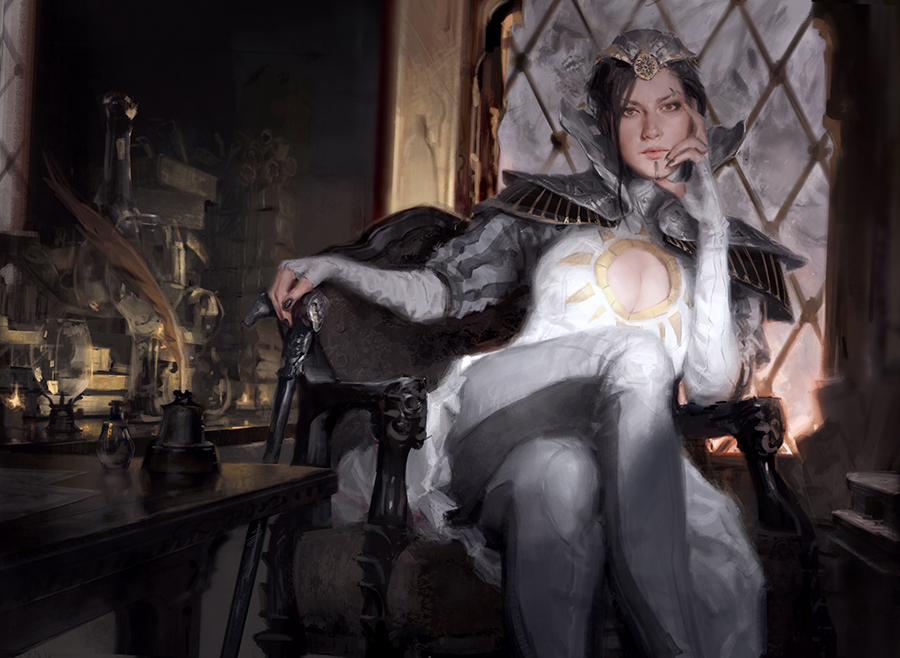 On Art Careers and Pricing

Karla Ortiz recently did some great threads on twitter about prices and art careers, and there was so much great info in it, she gave us permission to repost/reformat it here. Twitter is hard to archive, and honestly a little hard to follow, and we didn’t want this very helpful info lost. If you want to follow the original, here’s the thread.

We’re breaking it up into the Q+A format she made graphics for and then reposting some text directly: 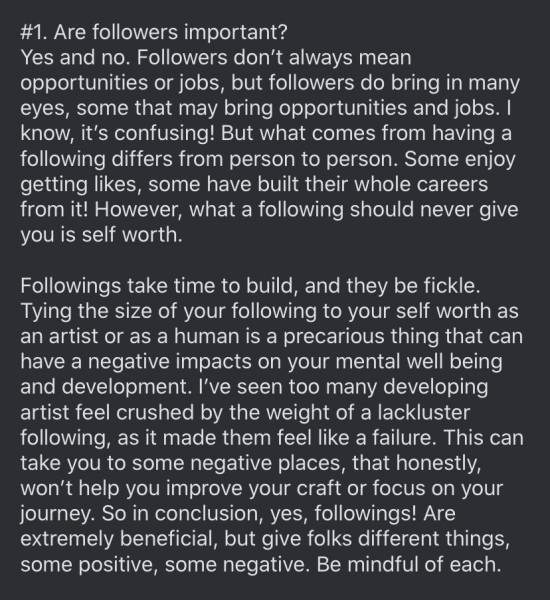 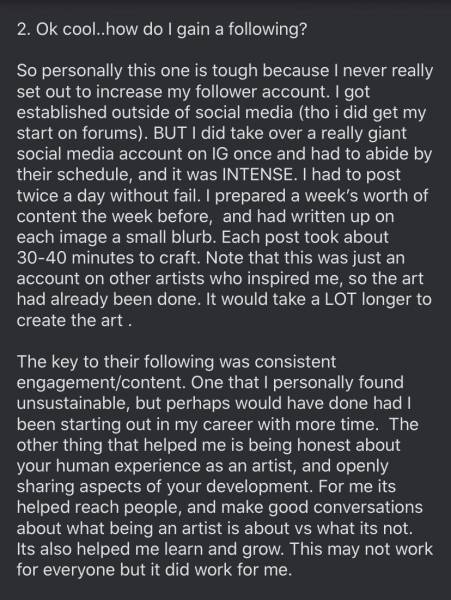 What does skill have to do with this? 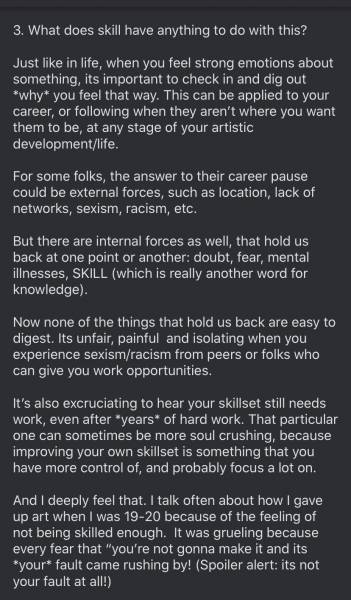 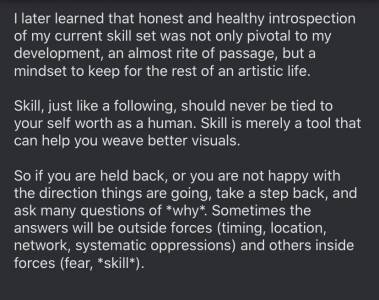 How can I tell if I’m skilled? 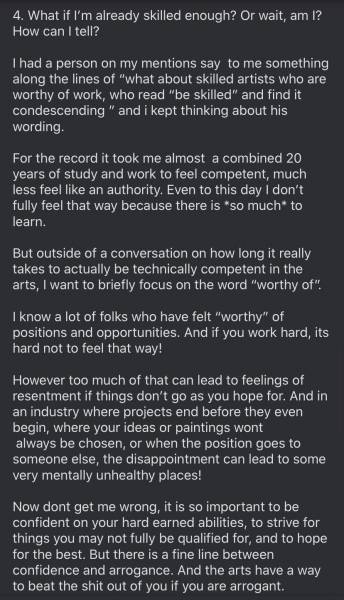 How do I get jobs? 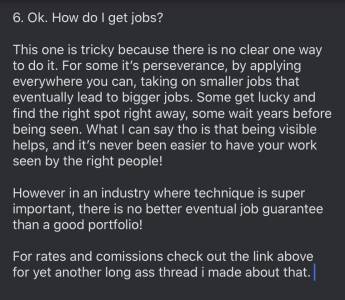 Then there’s a second thread, on rates (pulling out the info & reformatting a bit):

Pricing & rates depend on the following:

Industry and skill level. The art industries encompass many different disciplines, from illustration, film, games etc. And while these rates may seem high for some it could be normal for others. So before we continue, lets quickly give a basic estimate on rates. This isn’t extensive or scientific, just ballpark numbers from what I know each industry I’ve worked on pays. Important to note skill level and experience *do* come at play here. Rates given are in USD.

ILLUSTRATION: (Freelance) For cover work you can expect anywhere from $1500 (very low) to 6k (high) for covers. (MC note: this is for covers done for printed books, by a publisher. Ebook-only covers pay less. Self-published authors pay less) You’ll likely see it at 3-4k For card games like MTG you’ll usually get 1k per card, higher for rarer cards. I don’t have enough experience in comics or editorial to comment.

FILM or TV CONCEPT ART/VIS DEV:  (Freelance Day Rates) Entry level: 2-3500k per week. Mid+ senior level: 3500-5k per week. AD/Production designer: 5k+ per week. These depend on size of budget, skill and negotiation. Rates vary depending on the production you are working for. And while these are the *BEST* paying jobs they’re also extremely demanding, hard to come by and usually last for a couple months. You also have dry months where few hardly any work can be found, usually starting December and ending late February. Starts again in March.

COMICS: I hear comics pay very low. I know comic covers pay low. I got approached by a big publisher, and even tho I WANTED to do the cover so bad, I could not justify doing it because it was like 1k and I had other opportunities that offered better pay. (A reply from pro Olly Moss) Comic covers usually between 400-2k depending on the publisher/title. (MC notes: Page rates for sequential art vary wildly, but you have to be a superstar to get more than $500/page)

Ok so thats what you can expect as a professional in all those industries, at least in the US. Prices may vary depending on your local industry. For example, I know European companies don’t usually pay as much, as I’ve been offered big positions with a salary they thought would be generous, but compared to US pay would have been effectively a pay cut.

Also note some companies work hard to keep pay RIDICULOUSLY low. Sorry to say but companies like Fantasy Flight are *known* for their big brand IP’s but pay their artists $100 per asset. Companies like these are not and should not be the norm, (MC note: These should only be considered entry level freelance gigs, you use them for experience and to gain skill if you need to then move up the ladder). Now, as professional artists starting out, sometimes you need to take *whatever* comes your way, even if you *know* it’s not enough. I too had to do the same. Just be extremely clear with industry standards of fair pay, and if you aren’t offered that right away, understand the arrangement is and must be momentary. Do everything in your power to gtfo of that. Your technique will help here! For companies that pay low, know that this is never a choice the AD’s or creative people in the art company make. They’re fighting harder than anyone to get pay UP. It’s always management.

COMMISSION PRICING: For pricing, try and think of your rates not per asset, but by how long it takes you and if it sustains you. For example, let’s say a single character illustration takes you a 3 proper 8 hr workdays, from start to finish. At $100 per character painting you are effectively making $4.16 per hour. That is less that minimum wage. That is a poverty wage. You can say “ But Karla, it won’t take em *that* long to make an illustration”. I would say still calculate what your hourly rate would be and see if you’re still comfortable with it. Chances are you won’t be. But maybe you’re like “Karla, I am a SPEED demon, and can do 1 illustration per hour, and 8 illustrations per day at $100 is good!”. I would say, please dont rush, but congrats! You’ll still need non-stop-clientele and this can get pretty unsustainable pretty quickly. (MC note: physical injury from overuse of wrists is a very real thing, that Karla herself has had to deal with) Of course there are other ways to make a commission lifestyle sustainable, but most roads lead to higher prices, especially if your work is in demand. You also want to work with clients who understand this is a craft and won’t see you as an extension of their wrist. Clients who respect you and the creative laborer that you are. Now most folks I know don’t survive off commissions alone. They have a whole array of products that are more affordable, so their work is accessible to a wider group of audiences. The folks who I know live this way sell books, apparel, and are constantly working to find new ways to reach new audiences, who could potentially be able to pay their rates. Their time is valuable so their rates reflect that.

FINE ART: Fine art works similarly, except way more intense as you have to deal with galleries taking 50% off your profit. BUUUT making it big in the fine art world, well, that can be BIG $$$. Tho to be fair I know so many talented masterful artists who are still struggling in that world. And in my experience the Fine Art world is a bit more dependent on who you know, and skill isn’t always a factor. It’s not an easy life. Its rewarding but not easy.

Now, I’ve seen some extremely silly arguments that pricing high is something that is “Elitist”. That to me seems so tone deaf. You’ll usually see that argument from folks who have no idea what it takes to create good paintings. Folks who got used to cheap rates on the internet. Folks who pretend good rates will turn you into some sort of millionaire…when in reality you’ll still be working class. If you’re extremely lucky you’ll be upper middle class. Very rarely do artists in the entertainment business go further. If they do they are the exception, certainly not the norm. So all those folks, screaming “Elitism!” for rates that are fair, are doing the following: 1. Expecting the craft/labor you have trained for YEARS, to be cheap 2. Ignoring that you as a person need to live. Ignore them.

As fancy or romanticized as this may seem, it is still a job. And like any profession, if you’ve put the work to learn and become proficient, you should be properly paid. Anyway I hope this thread will give you some tools and knowledge to help you understand what you’re worth. So in the future let’s celebrate good rates that not only will allow you as an artist to live, but hopefully also thrive!

Now for those of you who aren’t artists and instead wish to support your faves, thank you! If you cant afford a commission, thats ok! Buy prints, buy books, buy their work in galleries! If that’s too much, then share their work with credit! This means the world to us! 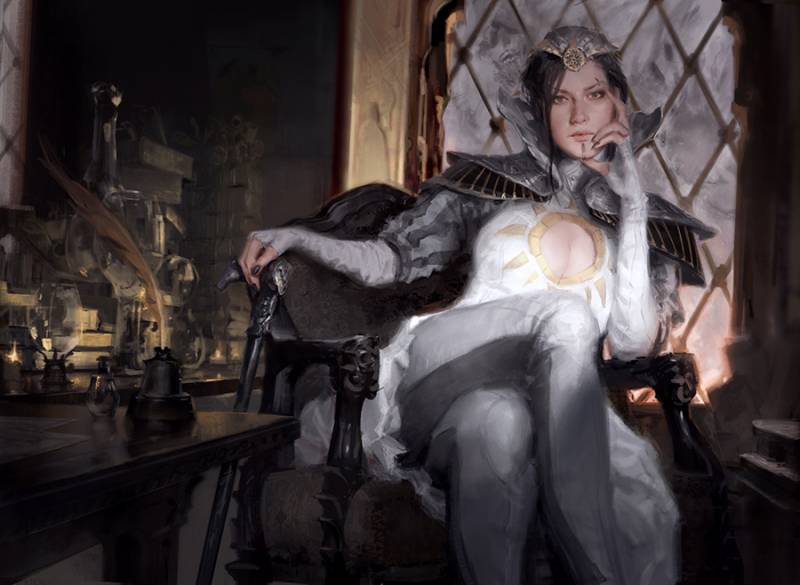 Art by Karla Ortiz for Wizards of the Coast

MC Note: If you would like more info on Art Careers, then check out the many posts here under the “Art Business” tag, check out the 5+ years of archived posts over at Dear Art Director, and take advantage of the materials & groups Drawn + Drafted creates out for artists. (Free or as discounted as possible at their gumroad page) 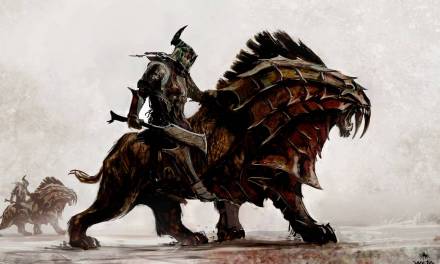 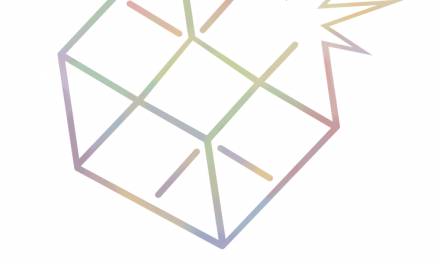 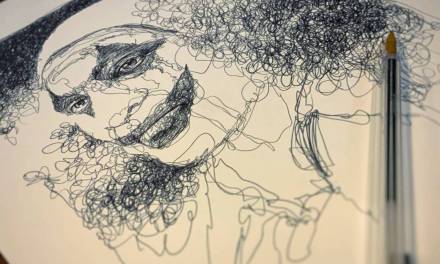