I’ve always had a limited amount of patience for perspective. It was necessary as a realist painter to at least understand the basic concepts, however I lean heavily on photo reference and now 3d renders to aid my work. Applying a basic understanding of vanishing points and eye levels to these aids has generally worked well enough to construct believable scenes.

As I’ve become more interested in the art of photography, however, I’ve found that translating perspective is more nuanced than I’d generally believed. Almost all lenses that we might use are going to render straight lines as straight lines and give what feels like a faithful interpretation of the scene. They essentially conform to the simple rules of 1, 2, and 3 point perspective. The question that I’ve been asking lately though is, are 1, 2, and 3 point perspective renders actually how we see? And what more exotic lenses can go beyond this? I accept that straight lines should look straight because this is the visual language we’re saturated in and this concept was standard long before photography, but is this accurate?

The problems with 1, 2, and 3 point perspective

There are two issues I’ve been considering. The first is that our vision is binocular. Unlike a camera with a single lens and a singular position relative to a vanishing point (VP), our vision actually combines two relative positions to any VP, because we have two eyes. The difference might be imperceptible in distant objects, but it is very noticeable in close objects if you blink back and forth between each eye. Our brain reconciles any misalignment such that we don’t actively think about it, but we can better perceive depth.

The other big departure from a photo is that our vision has no hard border. Peripheral vision does not end with the typically rectangular edge of a photograph, it just kind of… ends. Somewhere. As a result, it’s not so easy to judge how much distortion or curve might be introduced in our peripheral vision. There’s no straight border to compare against. Any method of trying to frame our view, such as the edges I can see of my eyeglasses, is subject to the same potential distortions and so not reliable. 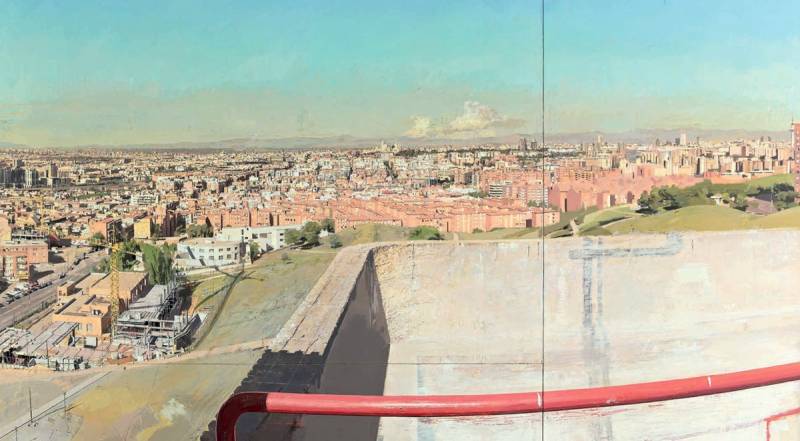 I first thought about this when seeing a show of Antonio Lopez Garcia’s work some years back. I had previously only known his work through small reproductions, but the originals can be fairly massive. In his cityscapes, he has an occasional tendency to curve straight lines at the periphery. This had seemed to me an interesting stylistic choice, perhaps to invoke the feeling of a very wide view. It wasn’t until I saw this in person, as it was intended to be seen, that it made sense. Standing in front of the massive painting and looking into its center, these curved lines felt straight. My brain was correcting for the warp, implying that it is doing this all the time automatically.

As mentioned above, most lenses are designed to reproduce straight lines as straight as possible. This type is called a rectilinear lens, and it is pretty ubiquitous in our daily lives. It conforms to the rules of 1, 2, and 3 point perspective. But what other lenses designs exist? I’m going to talk about two, as well as an unconventional use of rectilinear designs.

The first is the curvilinear lens, more commonly called a fisheye lens. While the limits of rectilinear lenses are 3 point perspective, a fisheye lens presents the world in 5 point perspective. Through this view, all straight lines take on a curve unless they fall directly on the central horizontal or vertical. Is this “realistic”? It doesn’t feel realistic to me, though I wonder if an image were to be projected at mural size like those Antonio Lopez Garcia paintings and I stared only at the dead center if it might feel more correct. The major disconnect is that most fisheye lenses capture a much wider angle of view than our eyes naturally see. Compounding that, we’re likely viewing them relatively small. If enlarged to proportionally match our natural vision, with the wildest distortions spilling beyond the limits of our peripheral vision, I suspect they might feel quite accurate.

Then there is the swinging lens. This is a rectilinear lens built on a pivot which rotates while capturing a photo. The capture surface is curved in an arc around the pivot. This means that the lens is physically pointing in one direct at the beginning of capture and another at the end. Digital panoramic captures, such as panning your phone across a scene, use this same basic method. The result is similar to continuous 4 point perspective: verticals that stand parallel (when the horizon is centered) or converge linearly to a single point (when tilted), but horizontals that curve as they connect north/south and east/west VPs. As the lens swings, the relationship to eye-level VPs continuously changes in the same way as you see panning a camera, except it is combined into one capture.

I don’t even know what perspective (continuous 3 point?  Is that a thing?) using a Horizon 202 swinging lens camera

The result is an image that is both rectilinear and curvilinear. The compromise of the two can feel correct in a unique way, allowing us to see straight verticals and curved horizontals that suggest a very wide view without the full warp of a fish eye. If these images were reproduced on a curved mural, the horizontal lines would appear straight again.

A reverse example.  Because these steps arc in a circle (left), a swinging lens shot from the center point turns everything into straight lines (right). Thanks to Peggy Guerin for the shot of me at work!

The final exotic design is a shift lens. The shift lens allows us to maintain 1 or 2 point perspective while also looking up or down. When we tilt a rectilinear lens, we create a third VP and enter 3 point perspective. In other words, when we tilt the horizon away from the center of our image, architecture begins to taper. This sometimes looks “wrong” and we want to maintain those parallel verticals. The shift lens does this by creating a huge projected rectilinear image and allowing you to recompose within that image circle. In other words, cropping. So to maintain parallel verticals, you lock the center of your image on the horizon and then adjust the image circle up or down to view the desired area. Your horizon will move up and down, but the perspective does not change. This mechanic was a very common tool in the days of large format view cameras because they allowed movement of the lens independent of the film plane. Those movements are a rarity in modern digital photography. This is exactly the same concept as taking a wide angle photo and then cropping to the lower or upper portion to adjust the framing. 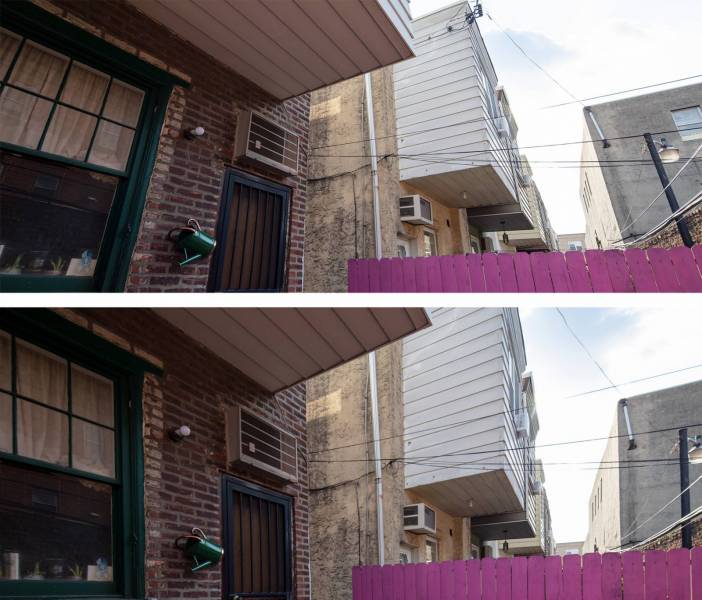 (top) framing the scene with a conventional rectilinear lens requires us to tilt up, introducing a vanishing point that causes verticals to taper. This scene is in 3 point perspective. (bottom) with a shift lens, the camera is set level to the horizon and then the image circle is raised to match the desired framing. The result maintains 2 point perspective while giving the view I want.

So what does all of this add up to? One take away for me is that the intended presentation should be considered from a perspective point of view. My work is rarely printed larger than a poster, so this isn’t likely to be an issue, but it might be worth thinking about if I were to create an immersive mural. Another interesting point for me is just comparing the feel of these different perspectives and considering how they might enhance the story of a painting. The more points of perspective are added, the more kinetic an image feels too me. Sometimes to a disorienting degree. 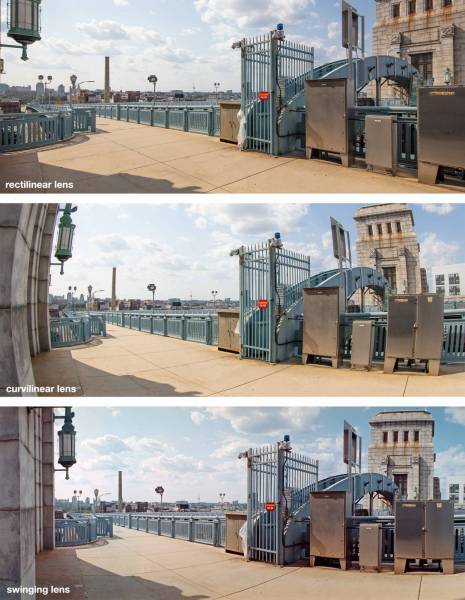 The main conclusion for me, however, is that perception of the world is not as fixed as I might like to think. Photography is tremendously useful as an aid to painting if you understand the basic mechanics of it. Choosing appropriate lenses and combining multiple sources should be done thoughtfully for the best effect. Exploring these admittedly more exotic means of depicting perspective in photos has given me a deeper understanding to draw on. More than that, however, it’s caused me to think more about what it is that I actually see when I look at the world. It is convenient to reduce everything to the simplest forms of perspective where all straight lines can be drawn with a ruler, but I now see that approach as just that: a simplification. 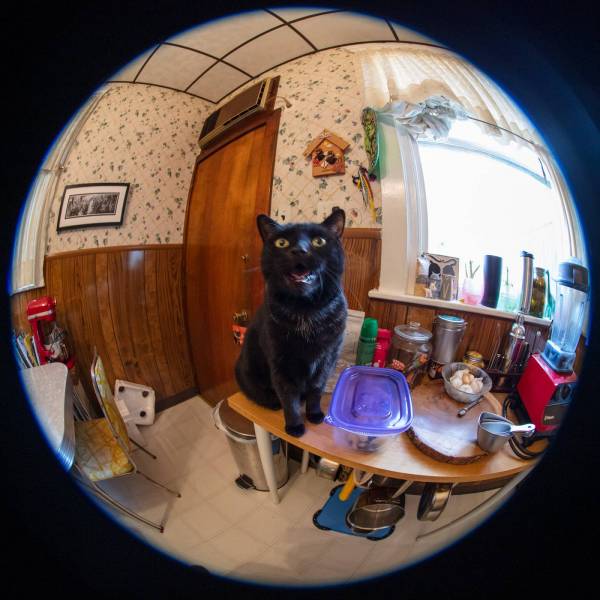 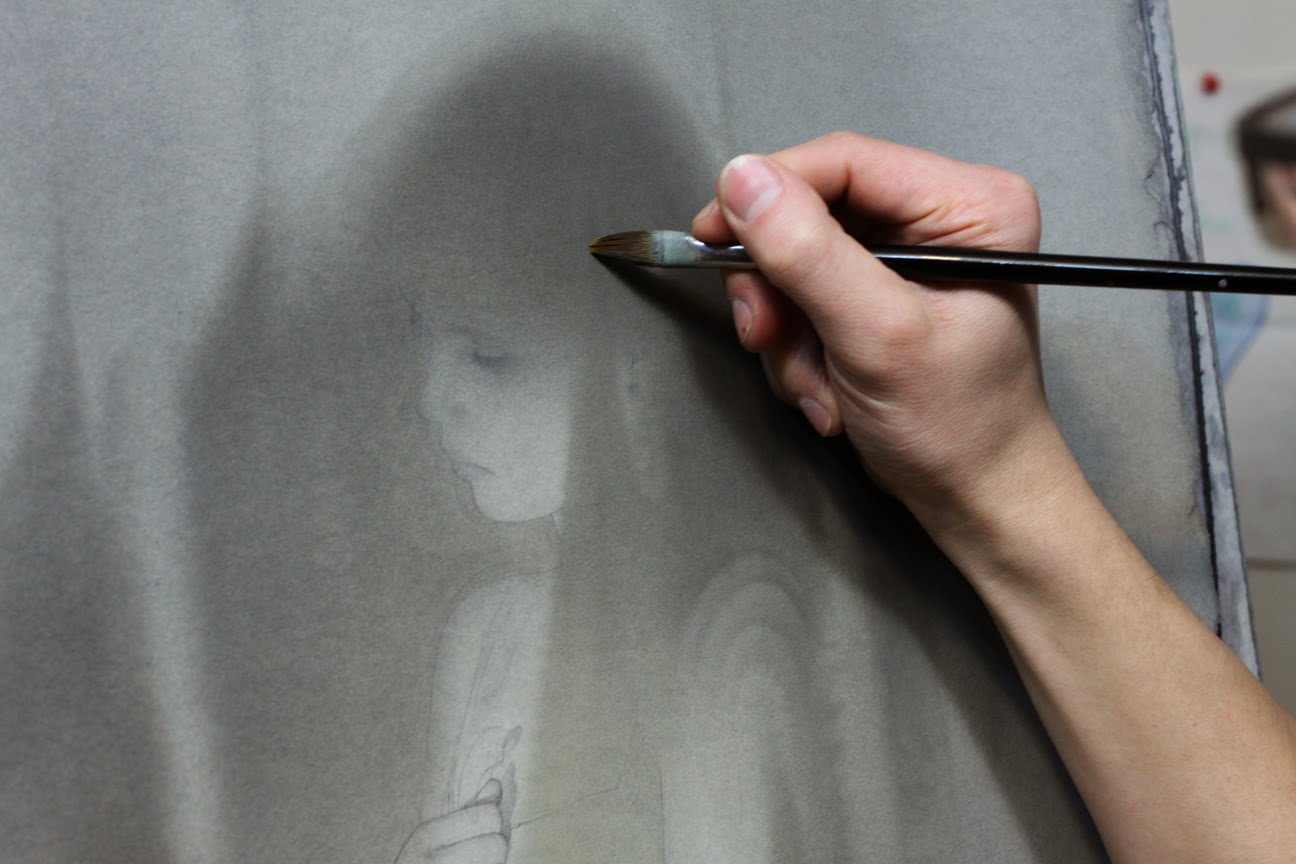 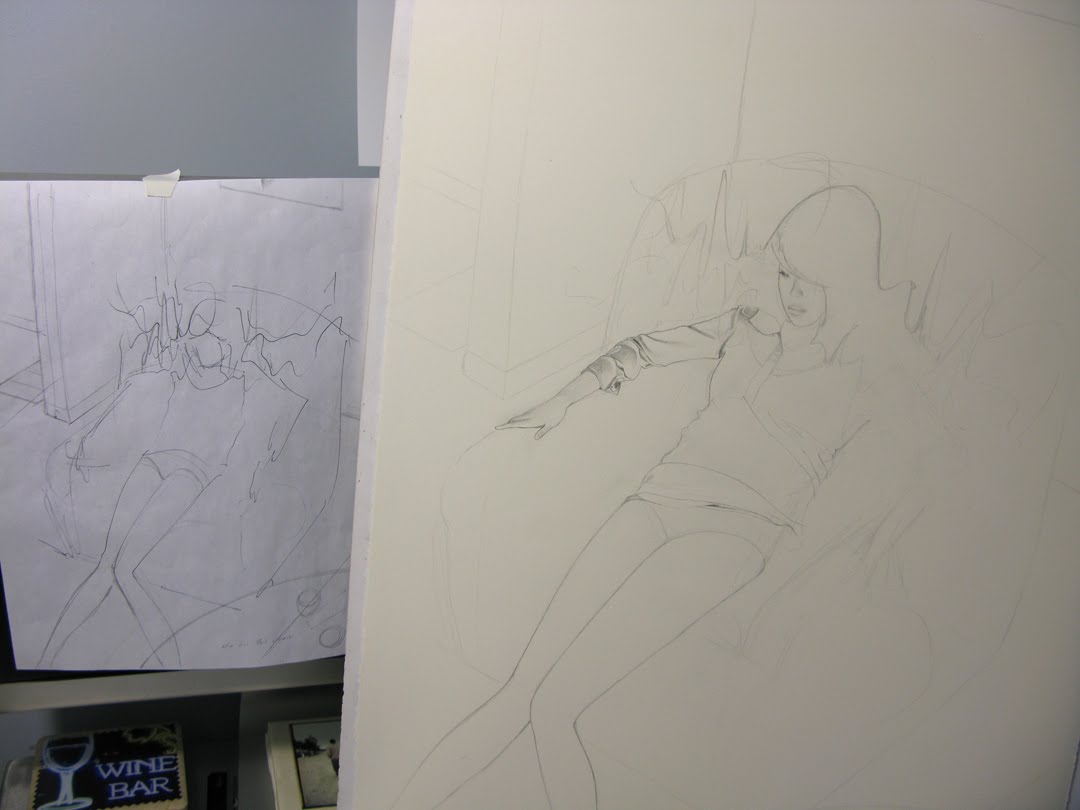 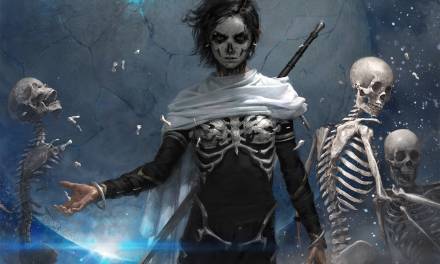