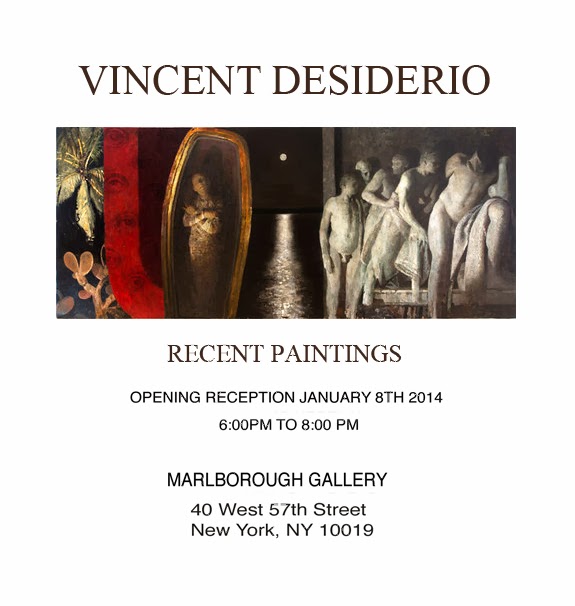 Vincent Desiderio will be opening a new show of his large scale oil
paintings on Wednesday evening, January 8th from 6-8 pm in New York
City at Marlborough Gallery.

I first learned of Vincent’s work through a teacher, Gerome Witkin, while I was in attendance at Syracuse University.  Gerome was kind enough to make an introduction which then lead to my assisting Vincent for three years in the beginning of my professional artistic development.

As I have stated before, I believe Vincent is one of the most brilliant painters living today, merging his
knowledge of modern aesthetics with the love of the human form and
sublime oil painting techniques. His work has
heavily influenced my own awareness of what image making could become.  Due to the scale in Vincent’s paintings, I
highly recommend  viewing of his work first hand to appreciate the
quality and emotional impact these images can deliver.

My only regret with this exhibit is that it opens while I will be flying to Huntsville, Alabama!  For those of you who may be attending the opening, may you come away inspired!  I will be stopping in as soon as I return to New York.


The Directors of Marlborough Gallery are pleased to announce an
exhibition of new paintings by American artist, Vincent Desiderio. The
show opens Wednesday, January 8, 2014, and will comprise paintings based
on a common theme that the artist calls “reification.” The show will
include approximately sixteen works featuring six large-scale paintings
measuring approximately five feet in height and twelve feet in length.
This will be Desiderio’s eighth show with Marlborough.

Desiderio has earned a well-deserved reputation for artistic mastery and this show attests not only to a mastery of painting but also to his far ranging interests. As ARTnews pointed out, “As large as Vincent Desiderio’s oils on canvas are, their content is commensurate with their size.” If there is one word to describe his grand, sumptuously painted works it is perhaps enigmatic. The artist’s paintings are freewheeling panoramas of ideas, emotions, aesthetics, and historical narrative.

In this show Desiderio’s keen observation ranges on subjects from film (Hitchcock’s Hands) and Boris Karloff (The Awful Indifference) to film noir and Italian Communism (Antonio Gramsci in Exodus) to the narrative pause of Ekphrasis, and to the erotically alive sculptures of an Indian temple (Transubstantiation and Three Acts of Defilement). Desiderio recently worked as the production designer on a feature film (Manhattan Undying), and in several of these paintings the juxtaposition of images acts like film montage.

Another central theme coursing through these intriguing, complex paintings is the constancy of nature set against the absurdity and foibles of mankind. Several works feature stone statuary: the artist has focused on the heaviness of the images to emphasize a materialization of form and to comment on how some current social values have turned art into a kind of signage, or commodity. In Arts & Letters Maureen Mullarkey said,

“Vincent Desiderio brings to the painting of the human figure a grace of hand, and rarer still, a grace of mind. Steeped in suggestion, his works are moral allegories. Realistically painted, his subjects assert the primacy of life over the painter’s world of forms.”

One might add that it is the primacy of life that, ironically through the paintings of stone statuary, informs much of the core themes of this show.

Desiderio emerged into the New York Art scene in the early 1980’s. His work had the immediate attention of critics who claimed his style as either “New History Painting” or “Neo-Intimist Painting”. Nancy Grimes in Art in America called him a “post-formalist representational painter,” and Donald Kuspit in his book, The Rebirth of Painting in the Late Twentieth Century, referred to Desiderio’s work as “Postmodern Visionary Painting:”

Desiderio is not just a painter, but a poet-painter who is able to condense into a single hallucinatory work a contradictory variety of emotions and ideas, in a way that makes it clear that painting has a unique power of subliminal, imaginative communication…Virtually every one of his paintings shows, somewhere in it –somewhere quite central – an uneasy truce or standoff between the experience of art and the experience of life.

Born in 1955, the second of five sons, Desiderio grew up in Media, PA, a suburb of Philadelphia. He graduated from Haverford College and later attended the Fine Arts Academy in Florence, Italy, followed by four years at the Pennsylvania Academy of Fine Arts, where he now teaches. He lives and works in Westchester County, New York. Desiderio has received several grants and painting awards among which are the Pollock-Krasner Foundation Grant and the National Endowment for the Arts Painting Grant in 1987. He was the first American to receive the Grand Prize of S.A.S. Prince
Ranier III, Thirtieth Annual Show of Contemporary Art in Monte-Carlo, Monaco in 1996. His work can be found in many important public collections, including: the Denver Art Museum, Colorado; The Solomon R. Guggenheim Museum, New York; The Hirshhorn Museum, Washington, DC; The Kemper Museum of Contemporary Art, Kansas City; Galerie Sammlung Ludwig, Aachen, Germany; The Metropolitan Museum of Art, New York; The Pennsylvania Academy of Fine Arts Museum of American Art, Philadelphia, PA; and The Walker Art Center, Minneapolis, MN.

In 2008 Desiderio was invited to be artist in residence at Dartmouth College, New Hampshire and in 2013 he was visiting professor at Tianjin Academy in Tianjin, China. In 2005 D.A.P. / Distributed Art Publishers published a monograph devoted to his work, Vincent Desiderio: Paintings 1975-2005 with texts by Mia Fineman, Donald Kuspit, Barry Schwabsky and Lawrence Weschler.

An illustrated catalogue will be available at the time of the exhibition.

Here are a few of Vincent’s other works. 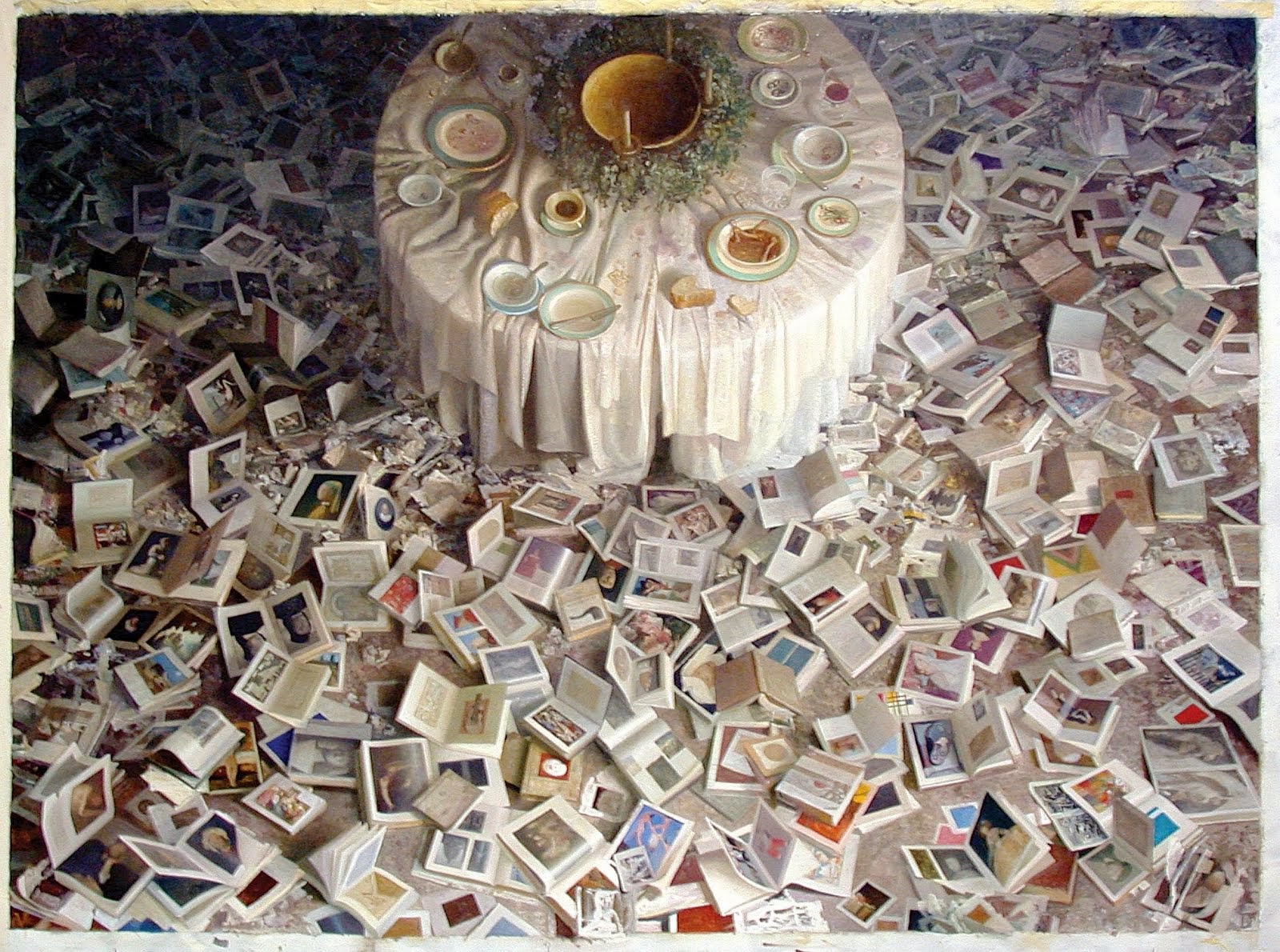 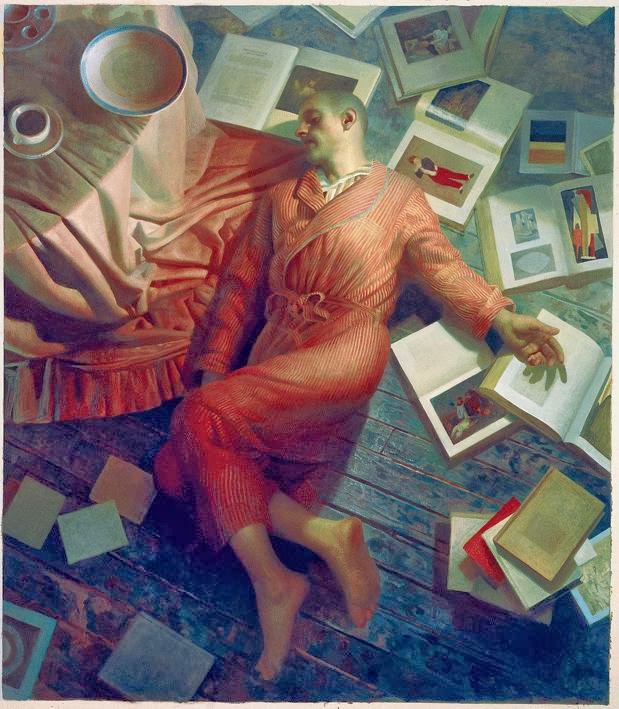 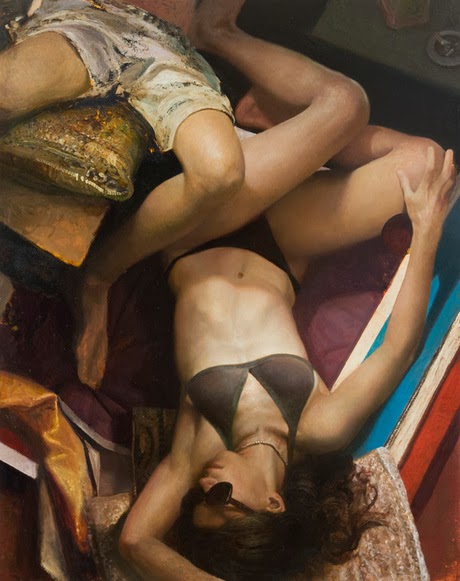 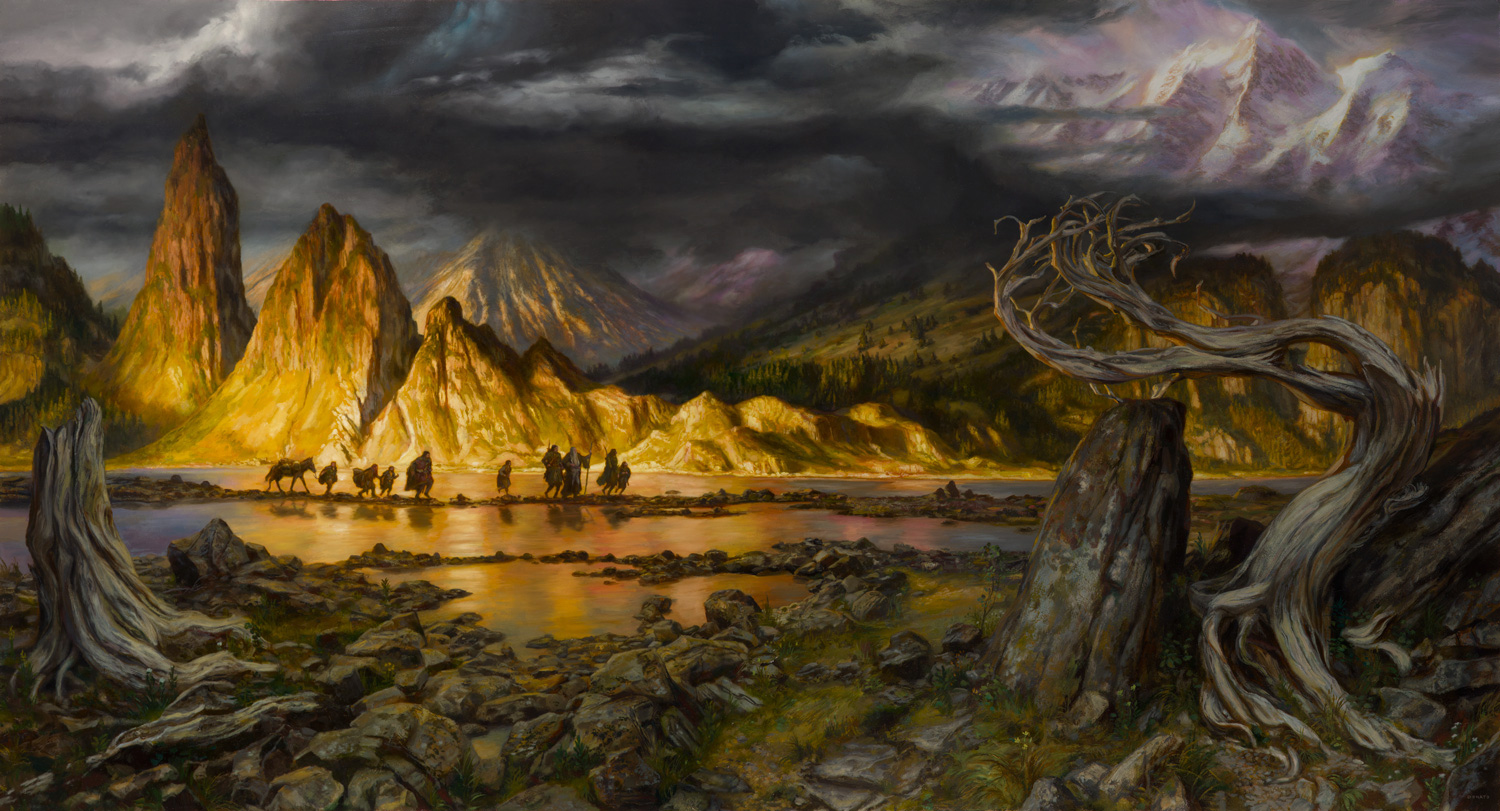 Epic Painting – The Fellowship of the Ring 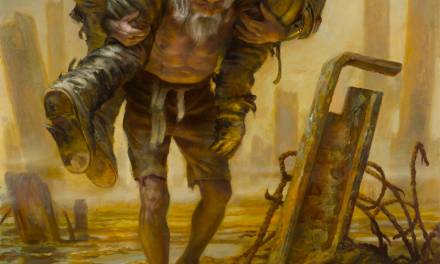 Burdens of the Past 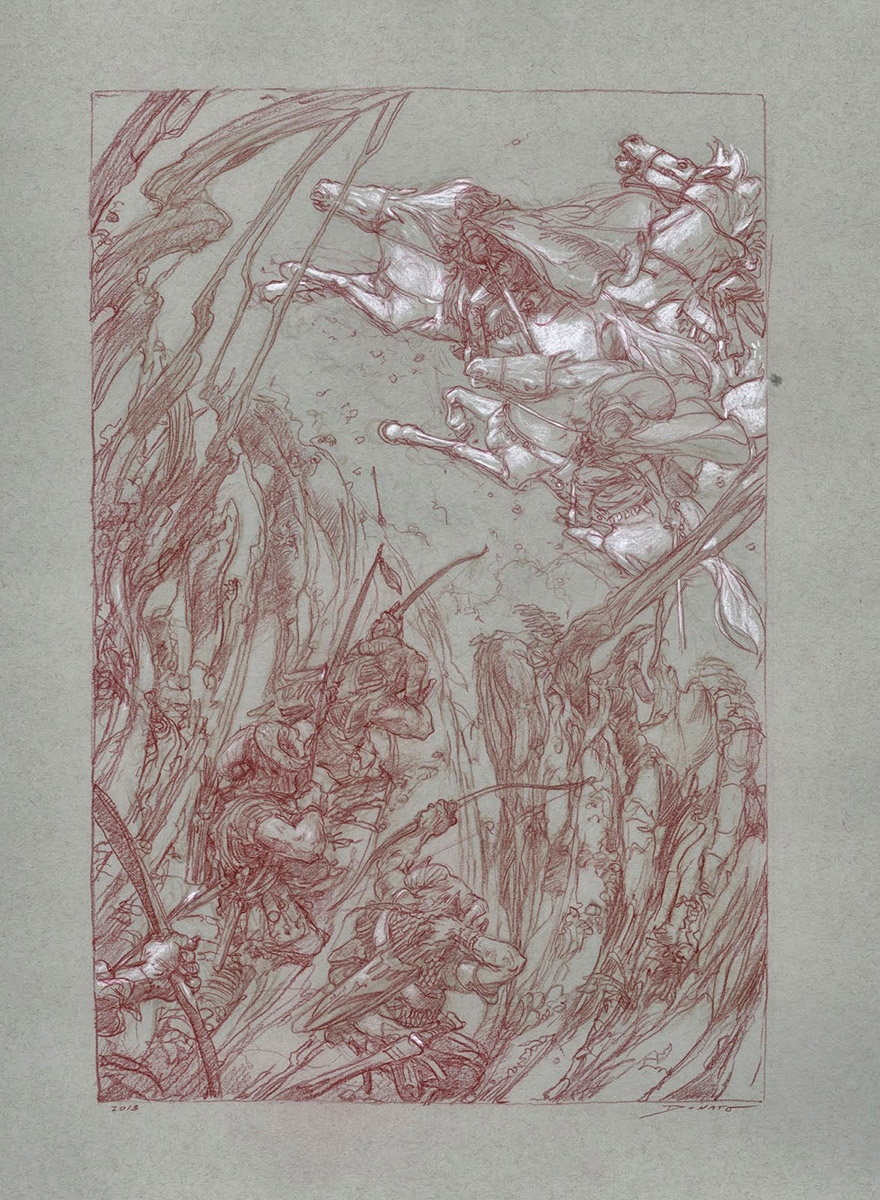