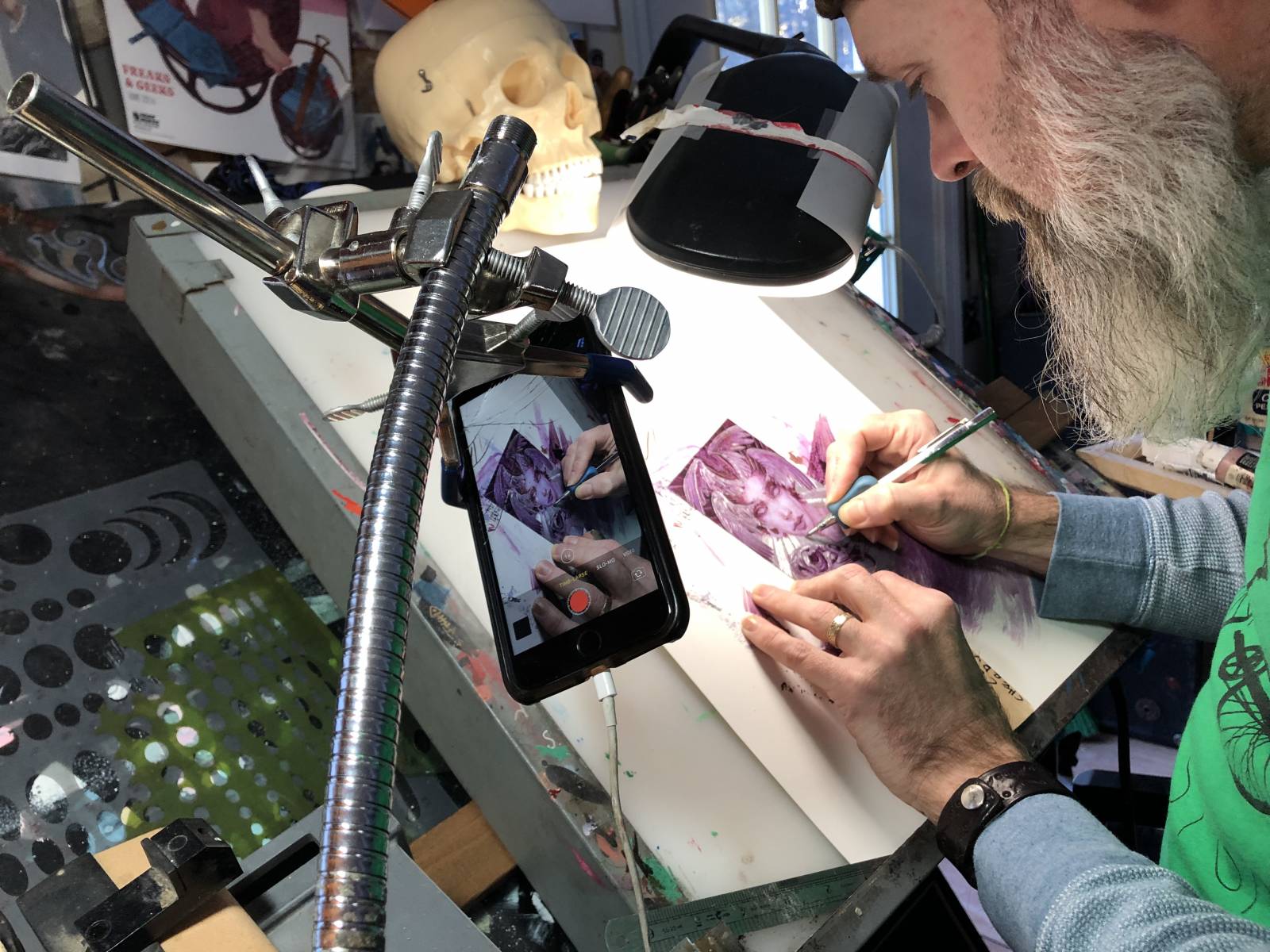 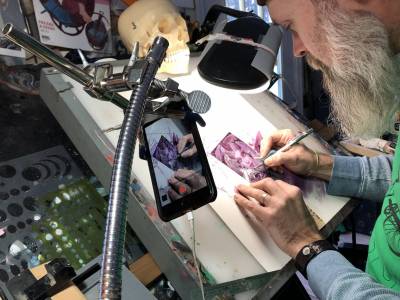 “Scott, how the heck are you getting those sweet angles with your camera, and what are you using to film and edit?”

Certainly, the tripod is the coolest part of it. It is actually it is a monopod. And if you know anything about me you know I am a tinkerer- so it won’t surprise you that I built it. Sure you can probably buy something that will do the job just fine, but where is the fun in that! And I am not so sure anything bought would be as versatile as the Fischer-Special.

Note: Everything I made this from I picked up second hand. So a bit of a treasure hunt is necessary. 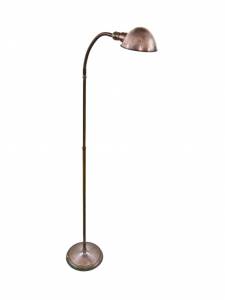 First thing: Keep your eye out at flea markets for those old fashioned mono lamp stands. You know the sort that has the bendy arm that looks like Doctor Octopus would use to pummel Spiderman. I think they are called Flexible Medical Examination Lamps. If you try to buy one new you will pay a pretty penny for it. I got mine for like $12 at a garage sale. But be creative, there are probably lamps at target that would do the job. So long as it has the flex arm. And I’d make sure the base was heavy or you may have to weigh it down.

The monopod is super important because it lets you get the stand really close without tripping over stupid tripod legs. I don’t like feeling caged in when I work. I need to be able to step back without busting my butt.

The lamp pole is telescoping up and down. I can literally raise the camera to the roof if I want too. Also you can screw a second flex arm to the first and have massive reach if you need it. (I never have.)

If you work on a desk you can also use any number of flexible desk clamps. But I’d make sure it has the fat flexible arm. Like 9/16″ diameter. I have tried the skinny ones and they bend under the weight of the camera. You can take the lamp head off. Or depending how it is situated it can be another light-source for you. 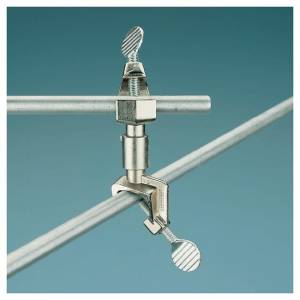 Second thing: I imagine you will have to buy one of these on line somewhere. But again I actually found this in a box of such things at a yard sale. Like $5 for the whole box. Score! What this is is a medical lab swivel clamp. Mine is a Fisher Castaloy Clamp Swivel Holder (No relation, lol.) Amazon has them new for $40 but ebay is your friend here. Just saw one there for $15. Snag it here.  And if you are patient, I am sure you could get one cheaper.

NOTE be sure to get the swivel kind where the two halves can rotate. There will be THREE thumbscrews on it. (The third is on the other side in the photo above.) 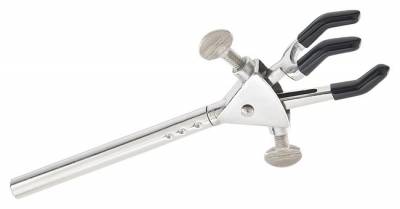 Third thing: The coolest part. The robot hand! Well not really, but it looks like it! It is actually called a 3-prong rubber clamp. This was in the yard sale box with the swivel clamp above. Some have a clamp already built in- in which case you almost don’t need the swivel clamp. But there will be angles you just can’t get, and if you get the arm with the straight shaft you can zoom in and out along the length of the shaft as much as you want.

The idea is for this thing to be as unobtrusive as possible. Amazon has similar ones for less than $10 but I like the claw to have two adjusting screws rather than one. Again ebay all day long.

Check out how close the camera gets but I still have tons of elbow room. 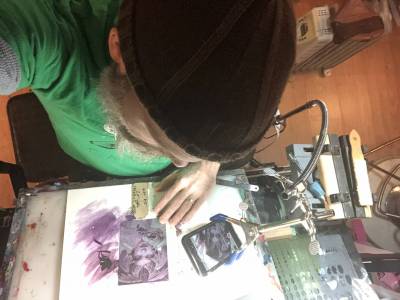 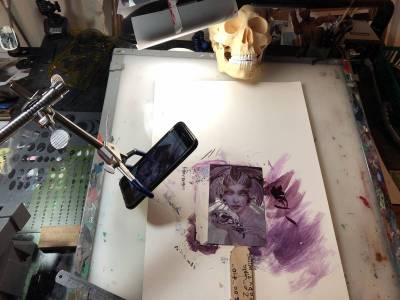 But there are other possible combos. So if you love messing with stuff, putting things together, tinkering- check out all the Castaloy junk on Ebay! Drool…

You folks are visual people so I am sure you can figure out how to put it together, but here are a couple more angles. Basically: Attach Third thing to Second thing and Second thing to bendy arm of First thing. Tada! 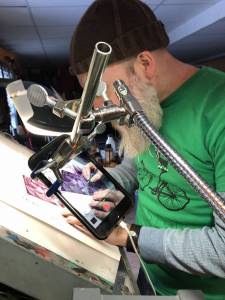 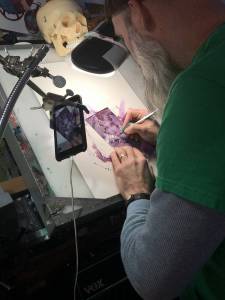 As clever as all that may be, the filming and editing part is as bare-bones as it gets.

Camera: I-phone 7+- the reason I got the plus when it came out is that it has two lenses one of which is a 2X zoom. This was important to me because I was sick of the camera being in my face when getting a close up shot. Now it can sit back twice as far. I film in Timelapse mode for most things to speed it up and make smaller files to airdrop later.

Software: Uhh… I just use Imovie on my Imac. Again pretty basic. I do it on my phone sometimes but I like having greater control over the speed of my footage, because even though I film in timelapse, I have to speed it up even more to hit that, ugghhh… Instagram 1-min limit. (If you are listening, I would kill for one more minute Instagram!)

I record my own soundtracks in Garage band but most of you won’t have to worry about that. It is just a great excuse to play my guitars.

Here is the truth of it. I film a lot. I mean like a whole lot. Trust me if it were any more complicated than this I wouldn’t do it. But in two seconds the phone is in the robot hand clamp and I am filming. The stand takes up such a small foot print it can stay there all the time. Airdrop footage to my Imac. Into Imovie to bash it all together. And I am done. And many times I don’t even go to the effort of Imovie, I just shoot it and post it.

The camera is always present when I am working now. It became a habit, and these days it feels like I am forgetting something if I don’t turn on the camera. 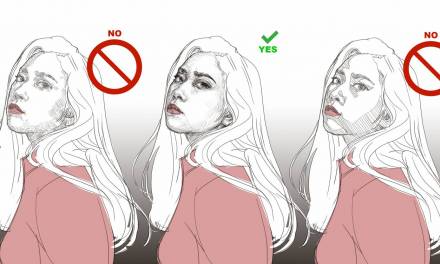 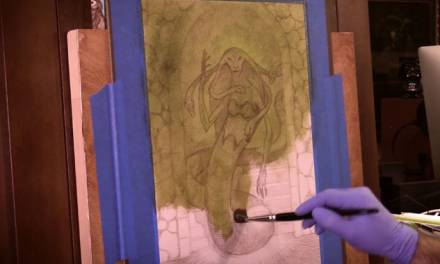 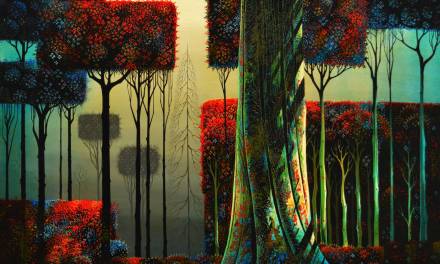 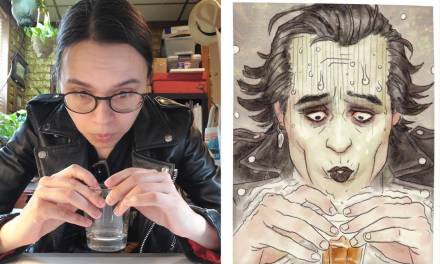