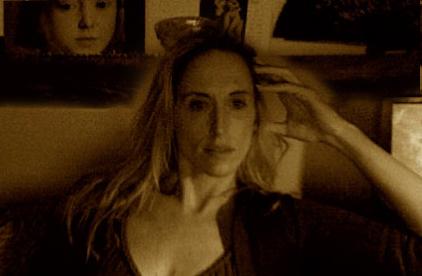 -by Arnie Fenner
One of the reasons we do a printed Call For Entries poster to mail around instead of strictly doing everything digitally, posting here or e-mailing there, is because we like the idea of having a physical artifact at the end of the day. Something that arrives in the mail, that you open up and look at and, hopefully, tack up on your bulletin board. As a reminder, sure; but also as a sign of community. At dinner following the judging for Spectrum 17, the subject of the C4E posters came up: we’ve been fortunate to have some wonderful posters by the likes of Greg Manchess, John Jude Palencar, Rick Berry, Phil Hale, Frank Frazetta, and John Berkey among other art giants through the years. One thing led to another during the conversation and before dessert was served, Bill Carman, Rebecca Guay, and Iain McCaig had all called dibs on the next three upcoming posters. They didn’t have to offer twice. Bill’s outstanding painting, of course, called the troops to order for Spectrum 18. Next up was Rebecca. Now our instructions to each poster artist are the same each time: do whatever you want, just as long as it 1] relates to the fantastic arts in some way and 2] is tasteful. Beyond that, have fun. Coming off two award wins in different categories of Spectrum 18, we were eager to see what Rebecca came up with for #19’s C4E. Several months back she dropped us a pair of jpegs of roughs asking which we preferred. Frankly, Cathy and I liked them both, but, after a rousing game of ennie-meenie-minie-moe we suggested “Face 1″—which Rebecca beautifully turned into the painting, “Vivian Becoming.” 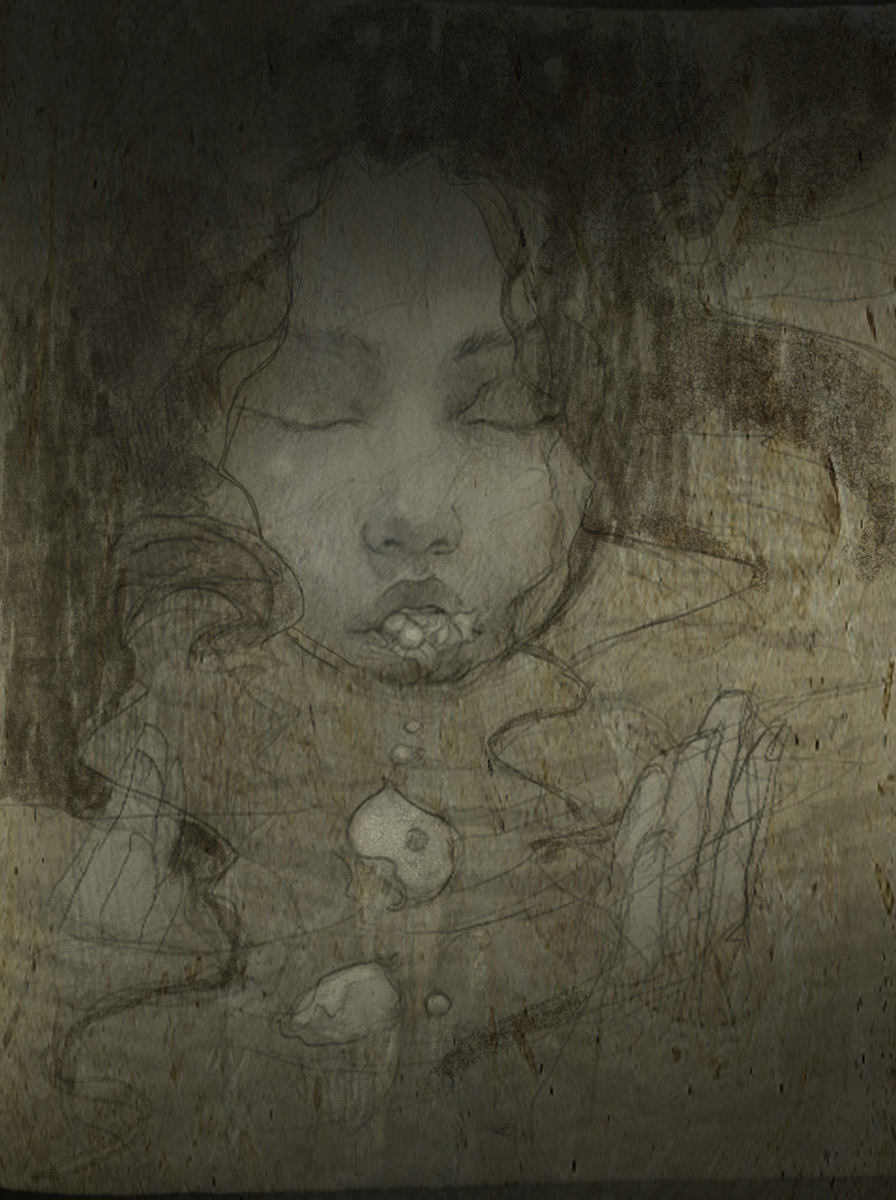 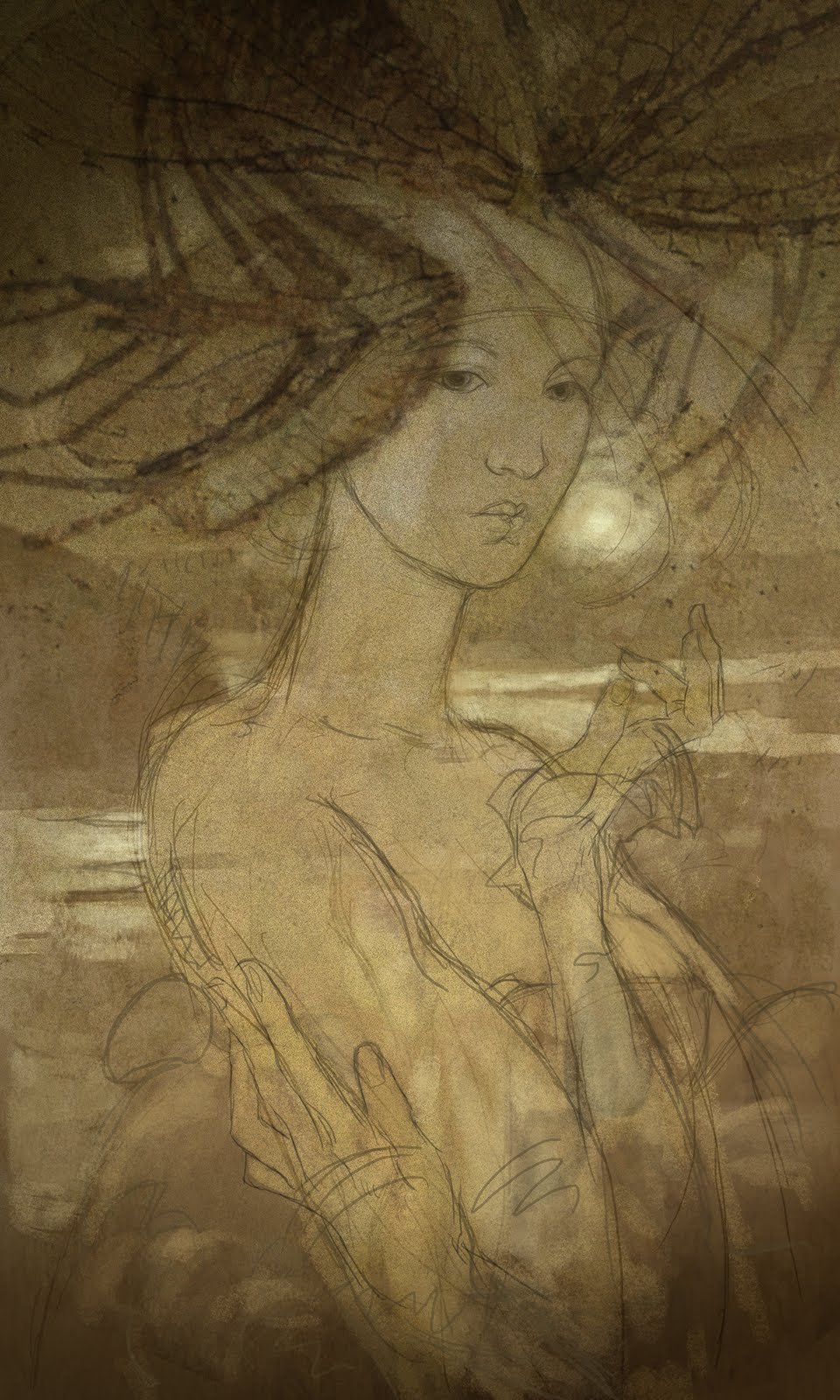 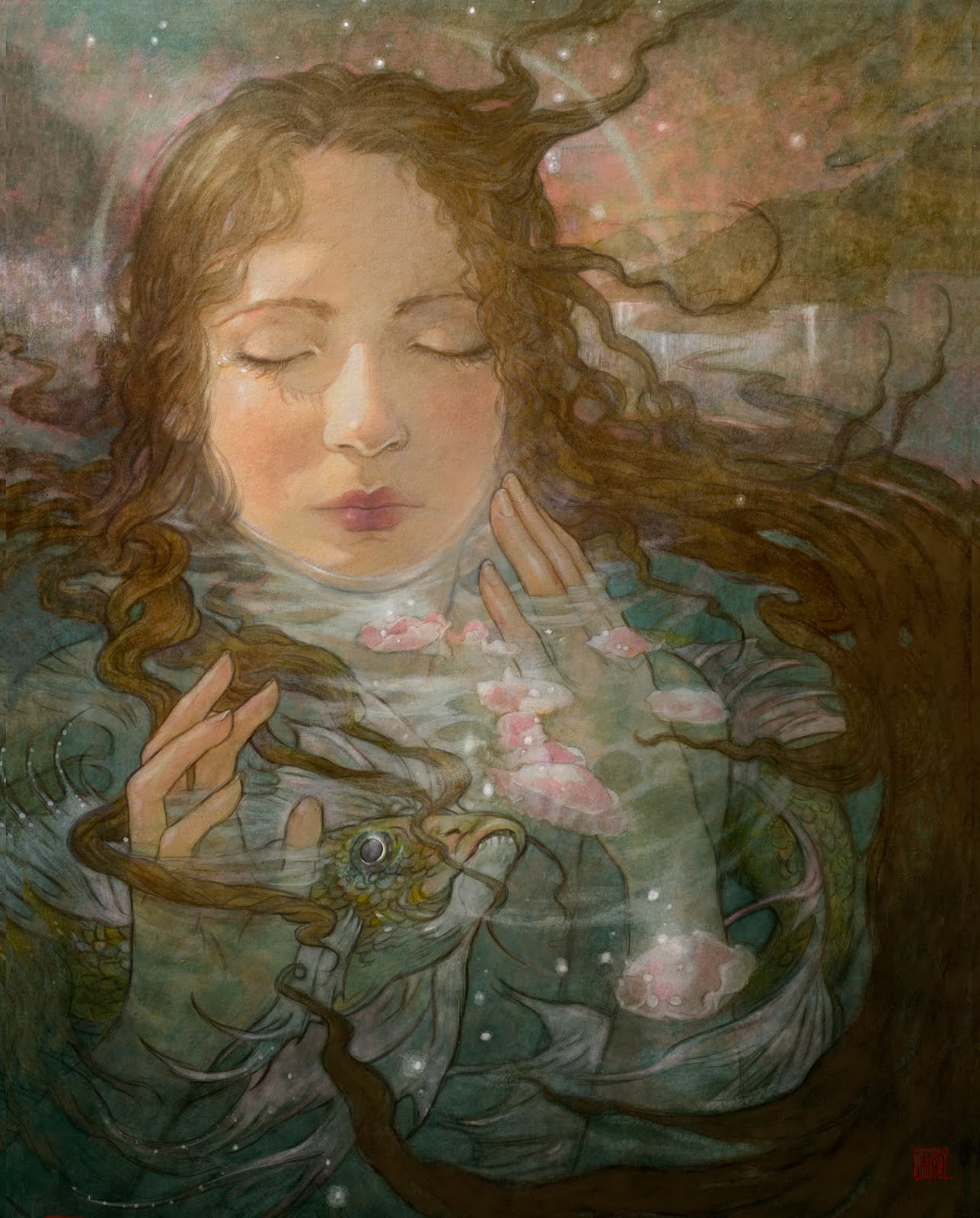 It looked great to us…but then she sent us a somewhat enigmatic note saying simply, “Hold on a minute; I have another idea I’m working on that I might like better.” 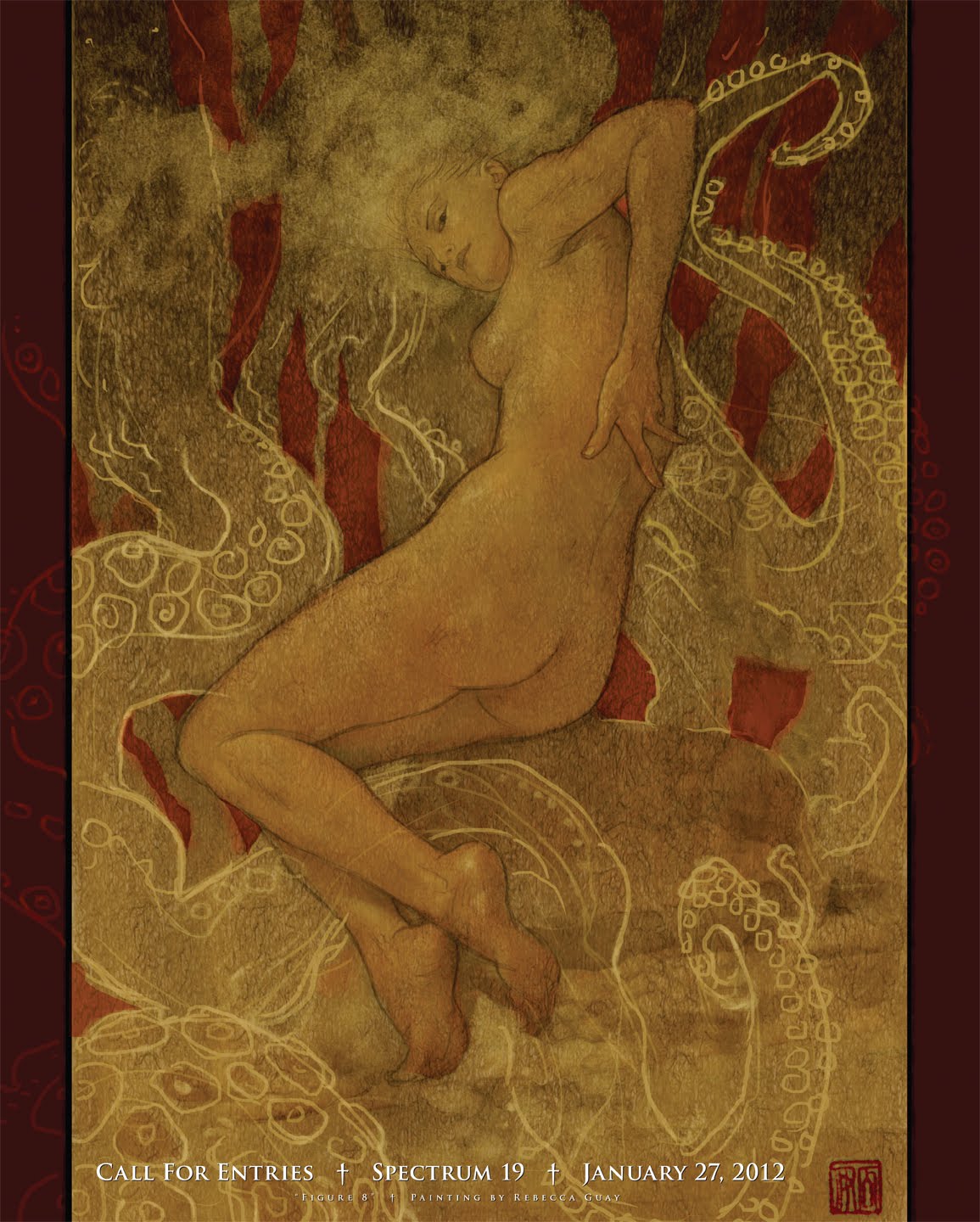 And when “Figure 8” arrived a short time later, well, we liked it better, too. “Liked” is an understatement, of course: we were knocked out. Thanks, Rebecca: we could not be happier! Exciting art by Bill Carman, astounding art by Rebecca Guay…now what will Iain McCaig create for Spectrum 20 next year? I can hardly wait. 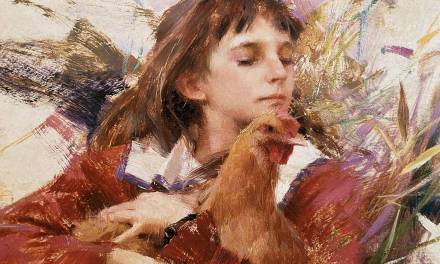 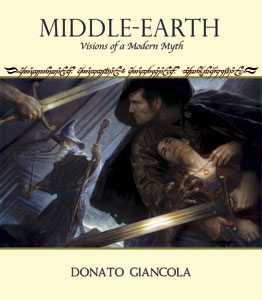 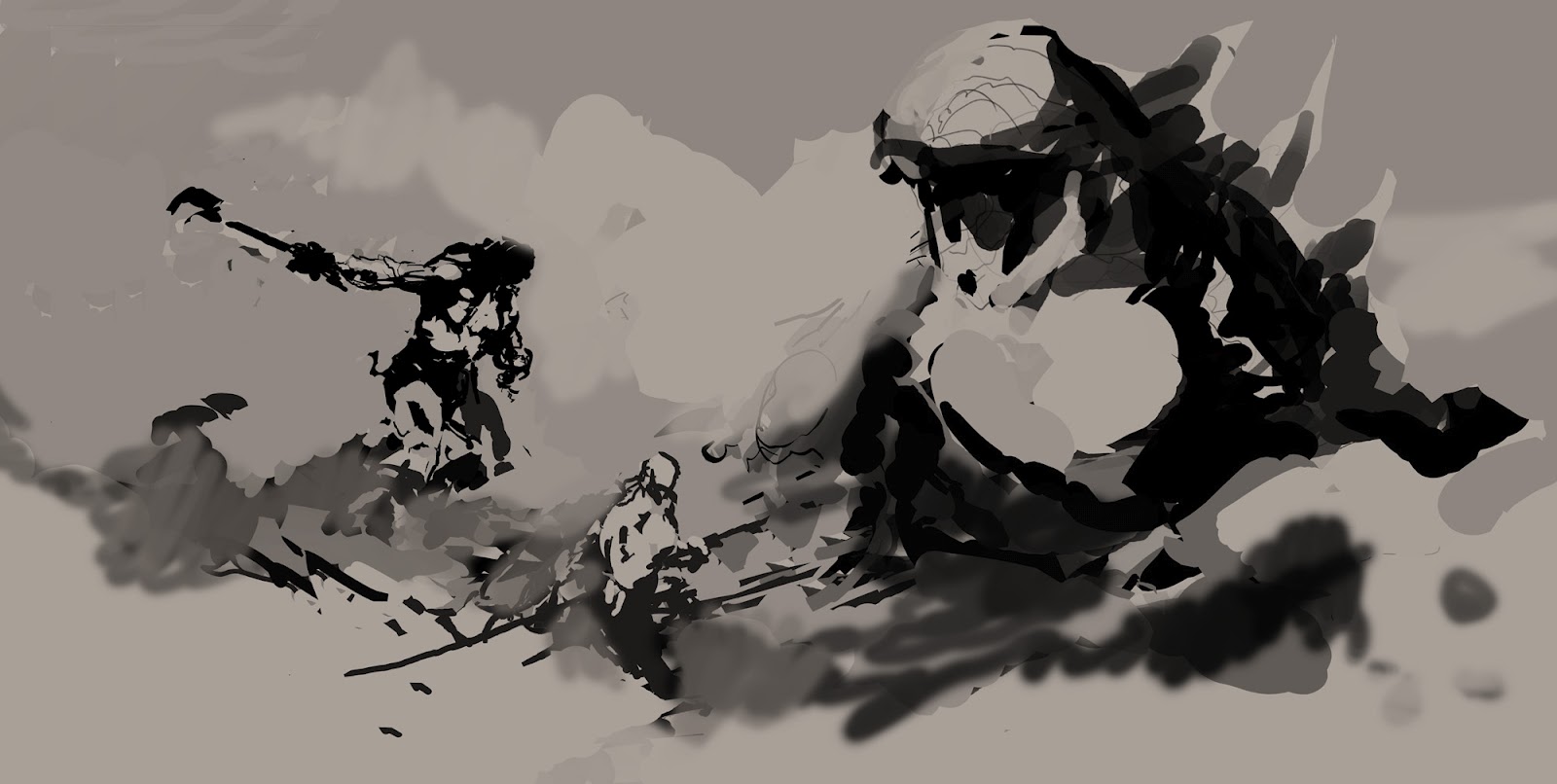 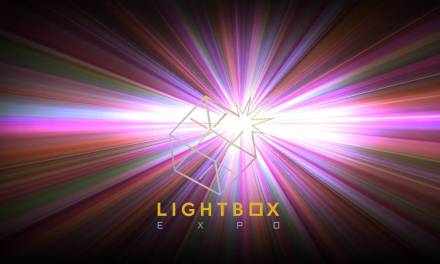