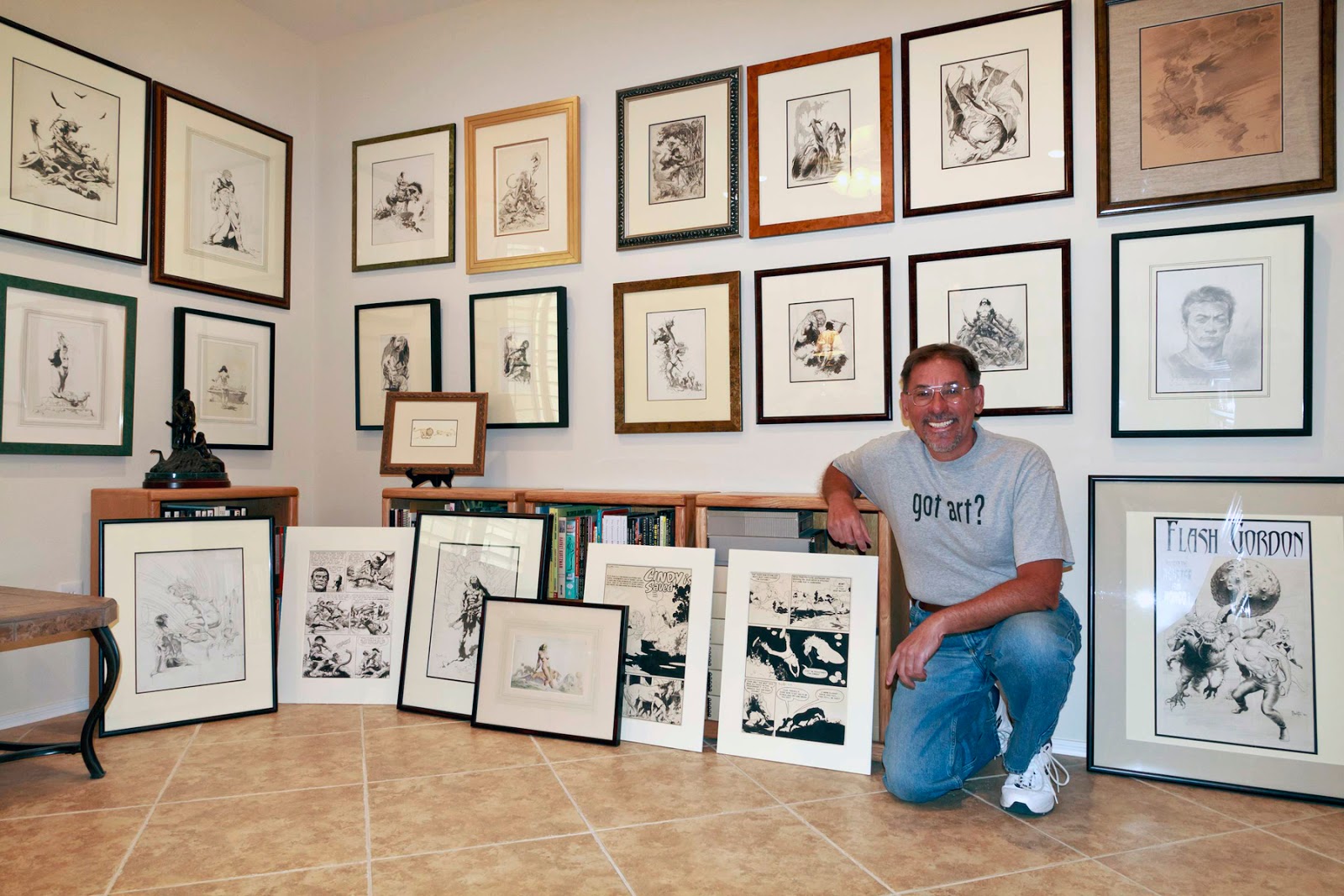 I’ve said it before and I’ll say it again: Dr. David Winiewicz is, without question, the Frazetta expert. Though I had spent a lot of time over the years with Frank and his wife Ellie (and their kids, too), have written thousands of words about Frank, and edited a batch of books with Cathy about him…I’m a piker in comparison when it comes to Dave’s knowledge and personal experiences.

He was, after all, Frank’s best friend and probably knew him better than anyone (family included).

Oh, plenty of people might make—and have made and are making—the same claim following Frazetta’s death in 2010, but they’re mistaken. Frank and Dave understood each other; even though they came from wildly different social backgrounds and despite an age difference of around twenty years there was a unique commonality that ensured an abiding friendship. They spent a tremendous amount of time together and talked frequently on the phone about virtually everything and everybody; they struck deals and made trades and did favors for one another; Dave was Frank’s trusted confidant.

Which, eventually, didn’t set well Ellie. The whole Frazetta story—the true story, not the myths and baloney endlessly repeated—is, well, complicated. The Frazetta household was always mercurial and you were never quite sure whether you were entering a love nest or a battlefield when stepping across their threshold (or know when one might morph into the other)—but Dave always knew and that created something of an uneasy dynamic when he, Frank, and Ellie were under the same roof. People have been shocked by some of Dave’s memoirs detailing various incidents—his blog site was even hacked and taken down for a time by an incensed sycophant after one particularly revealing post—but anyone who actually knew the Frazettas and spent any time with them merely nodded and acknowledged the accuracy of Dave’s stories. 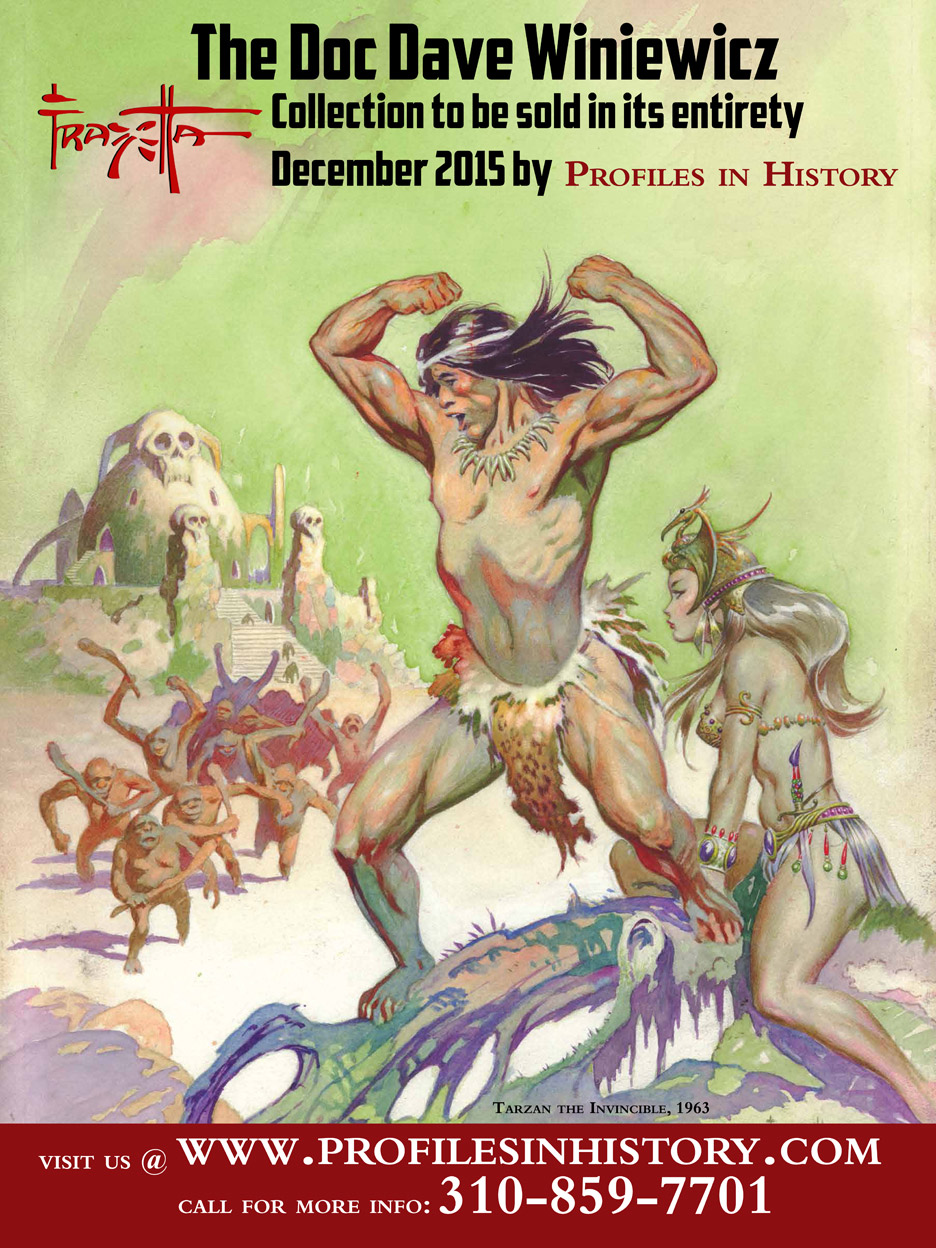 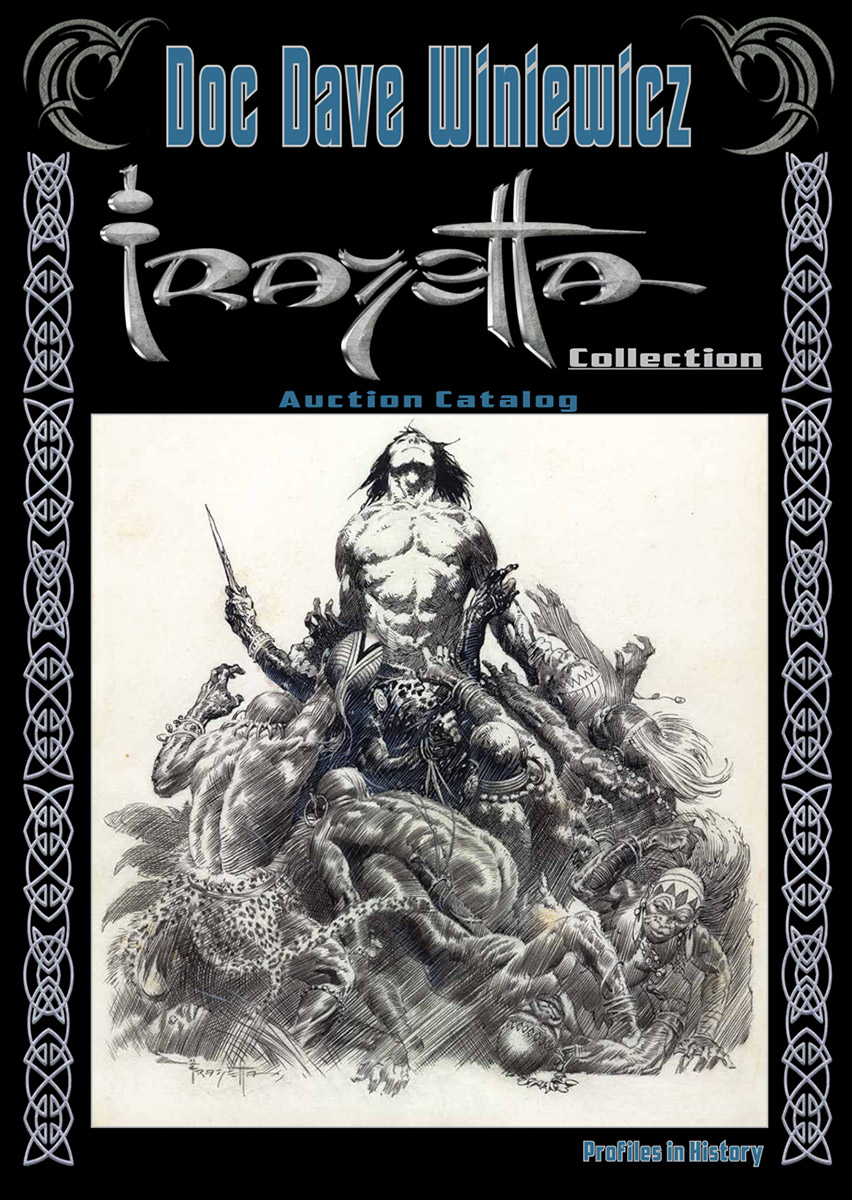 Above: On the left is the poster announcing the auction that was distributed at SDCCI featuring Frazetta’s gouache cover for Tarzan the Invincible (Ace Books, 1963). On the right is the catalog cover featuring an ink drawing from Tarzan and the Castaways.

Yeah, when I say that Dr. Dave was Frank Frazetta’s best friend, there’s a lot to back it up. 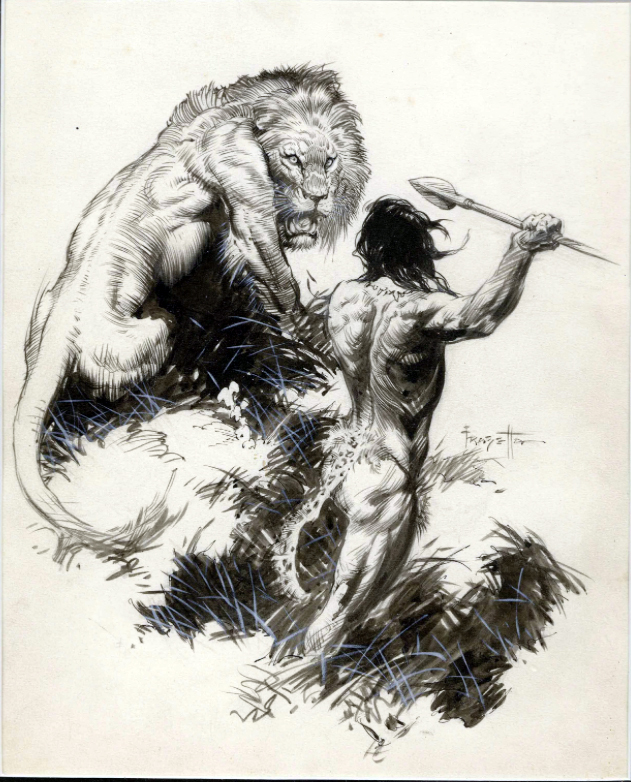 Above: One of the iconic interior drawings from the 1965 Canaveral Press edition of Tarzan and the Castaways. Frank was at the peak of his skills with brush and ink when he illustrated the book. Though they pack a big punch (the Canaveral illos have been regularly reprinted in one place or another over the last 50 years), the actual drawings are very modest in size. This one is about 8″x10″.
Dave’s passion for Frank’s art is second to none and his collection—with its primary focus on Frazetta’s ink work—is the finest outside the family’s various holdings. I mean, his trade of a ridiculously gorgeous and rare and extremely valuable watercolor of Calvin and Hobbes by Bill Watterson for a 1950s drawing Frank did of Flash Gordon left me incredulous. Not only are any Watterson originals in private hands few and far between, but this watercolor was simply one of Bill’s best. “It was the only thing the collector would take for it,” Dave calmly told me, “and I wanted that drawing of Flash.”
THAT’S how much he loves Frank’s brush work. 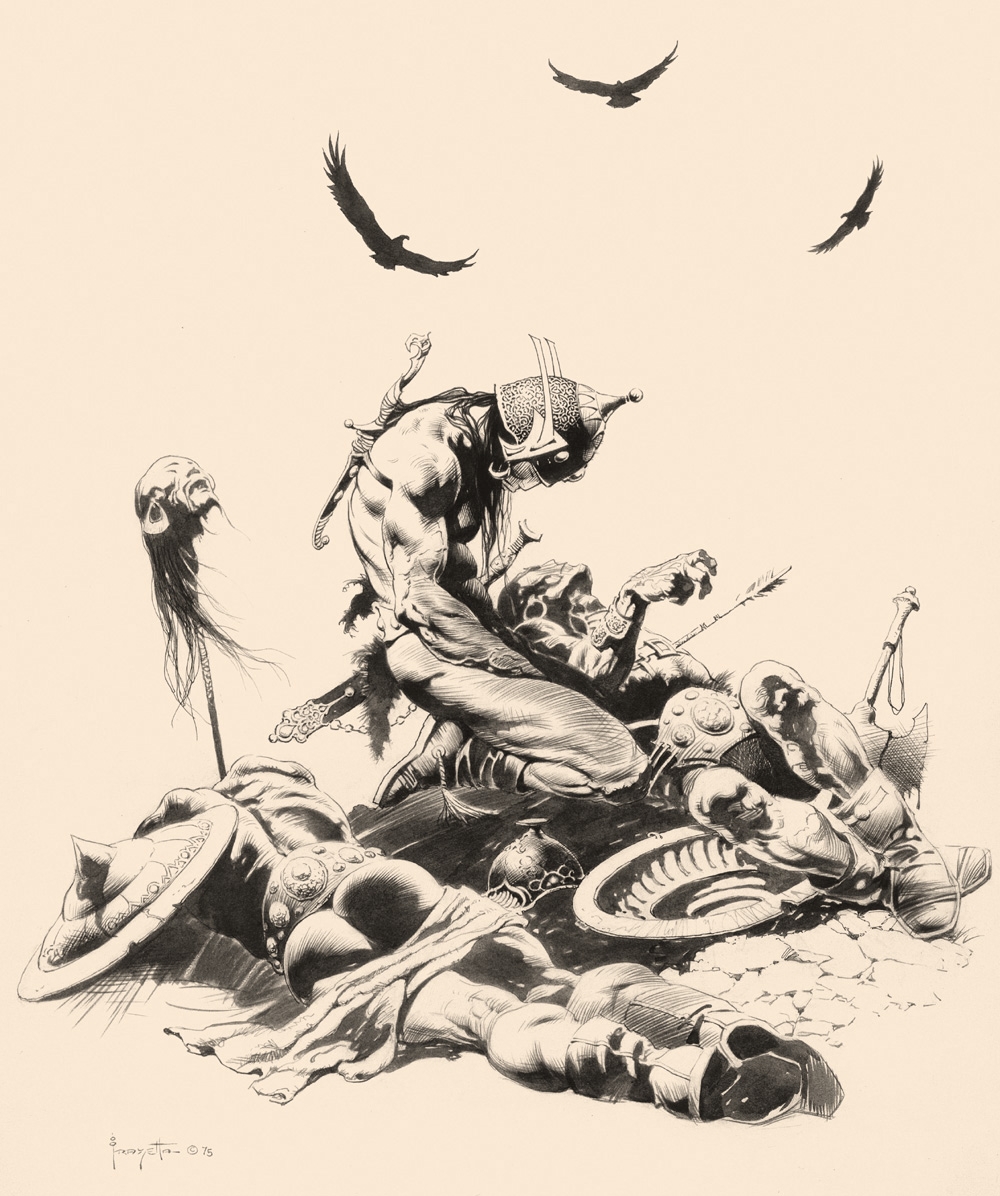 Above: “Kubla’s Anguish,” a plate from the Kubla Khan Portfolio [1977].
So obviously I was very surprised when he dropped me a note telling me he had decided to auction everything: all the art, all the photos, publications, and ephemera. “I turned 65 in May,” he told me, “and realized it was time.”
Dr. Dave contracted with Profiles in History to auction everything lock-stock-and-barrel December 11. Deep-pocketed collectors have been circling since the sale’s announcement at the San Diego Comicon in July and several have tried to strike pre-auction deals directly with Dave without success. “Everyone will have to wait,” he says.
While they’re waiting, they can order a catalog (which includes the backstory on each of the works being offered) from the auction house at the link above and…wait for December 11. 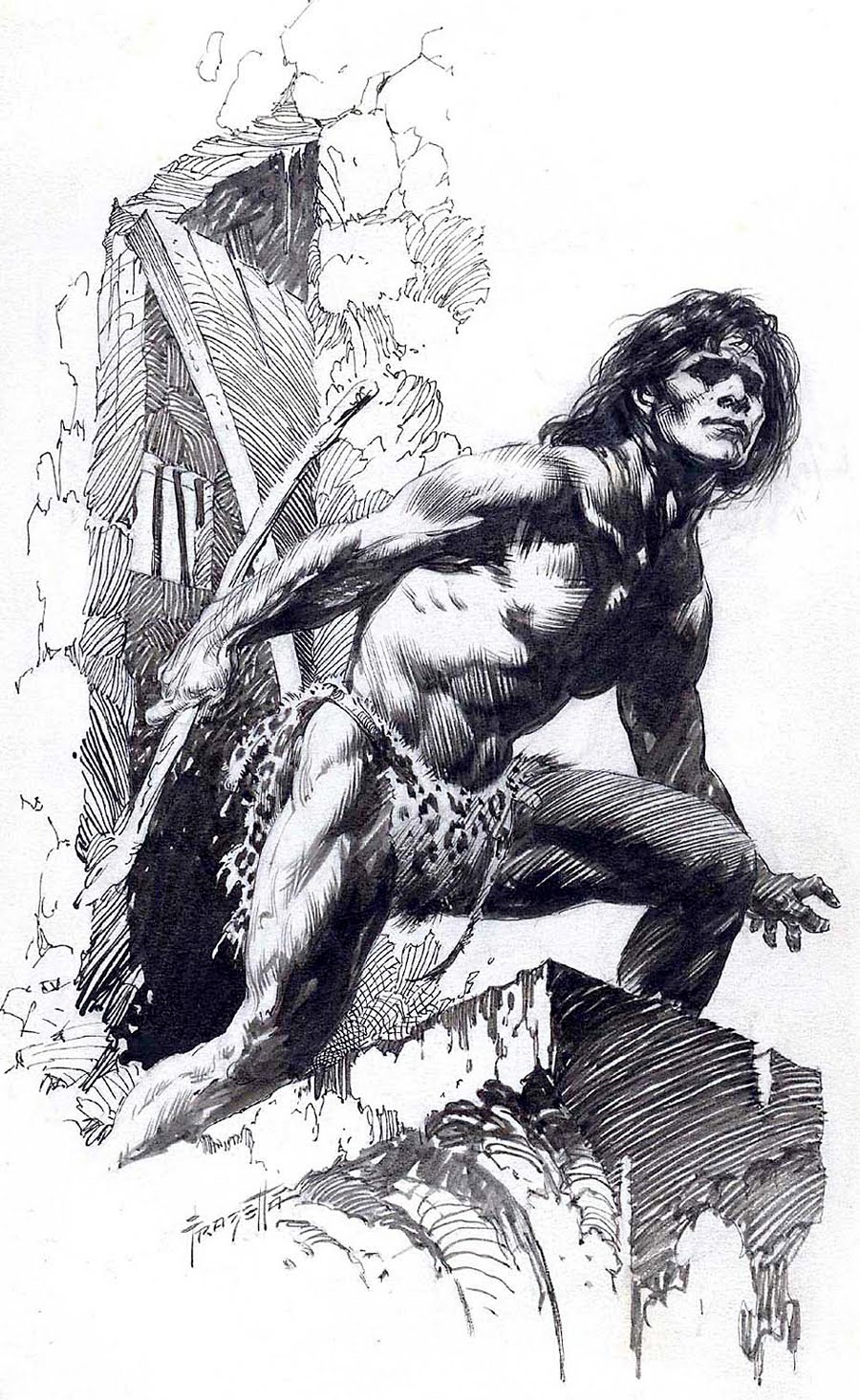 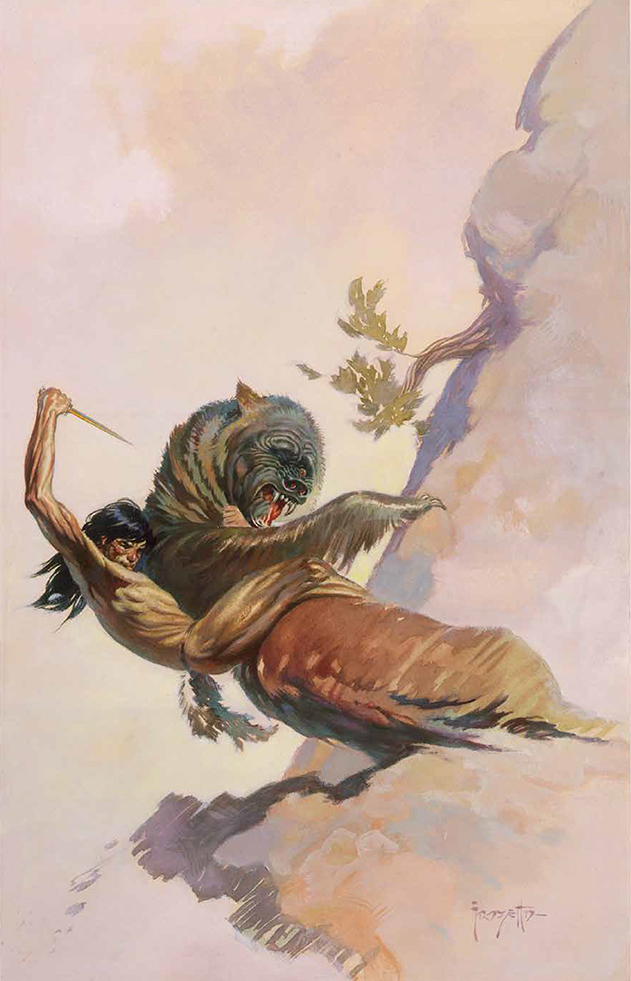 Above: Two more works based on the fiction of Edgar Rice Burroughs. The one on the left is also for Tarzan and the Castaways while the one on the right was painted as the cover for Tarzan At the Earth’s Core [Ace, 1962]. This is “the famous ‘dried-in-oven’ painting” which bowed so severely that it broke in half when Frazetta tried to flatten it. Frank quickly repainted the art and delivered the second piece to Ace to use for the cover; the first (shown here) was repaired by Frazetta and is considered by many to be the better work, crack and all. 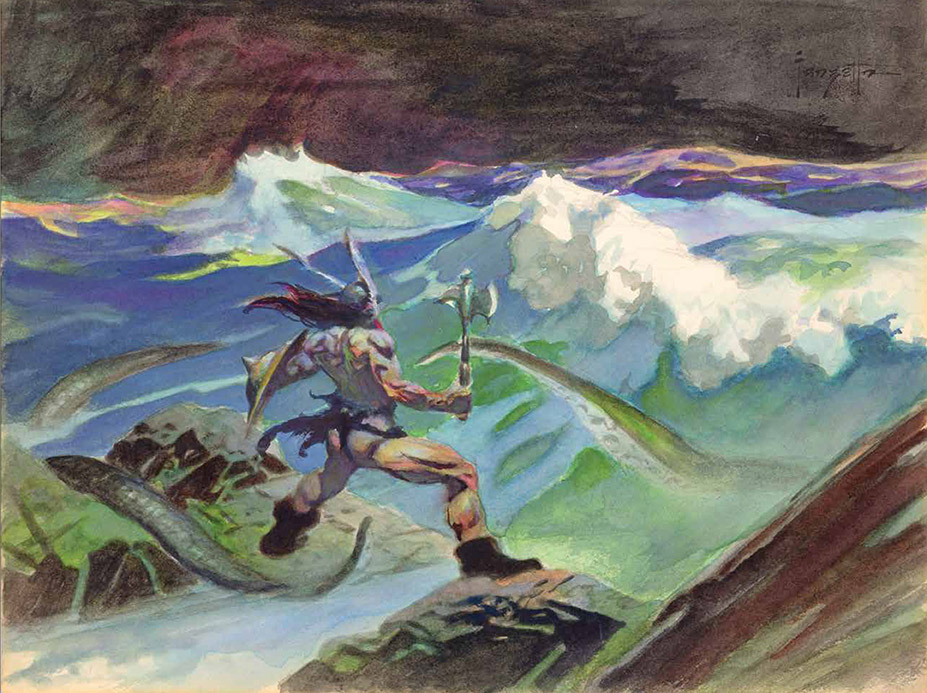 Above: This is an unpublished comp Frazetta considered painting for the cover of Conan the Buccaneer for Lancer Books. He wound up taking a completely different direction for the final art. 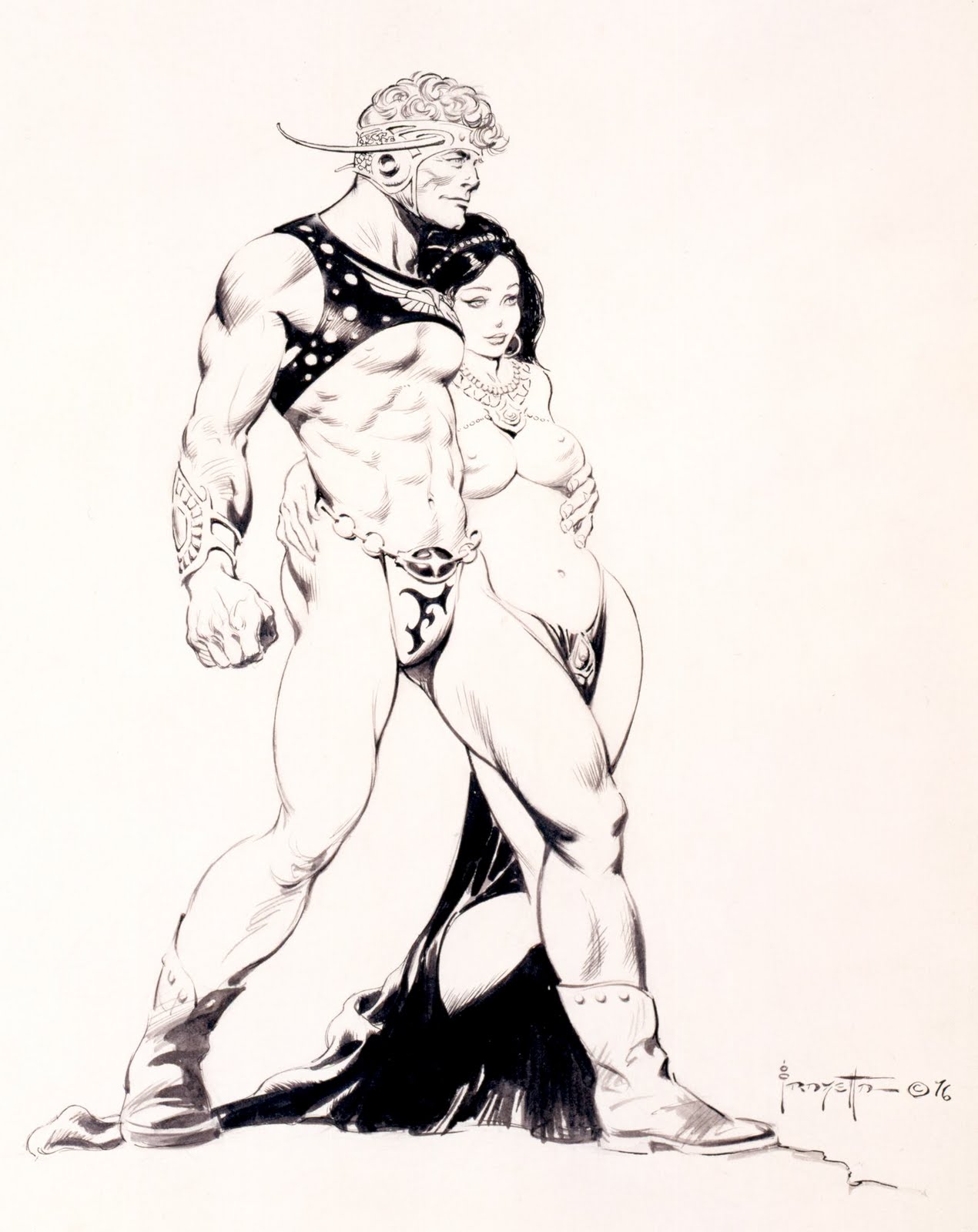 Above: A Flash Gordon drawing. No, not the one Dave traded the Watterson original for.
He says, “I suspect it was earmarked to be published in the early Heritage fanzine that was
devoted to Flash Gordon, but Frank never made the deadline.”
[youtube=https://www.youtube.com/watch?v=ojnS5vh170s&w=320&h=266]
Above: How does Dr. Dave really feel about Frazetta’s art. Well…watch. 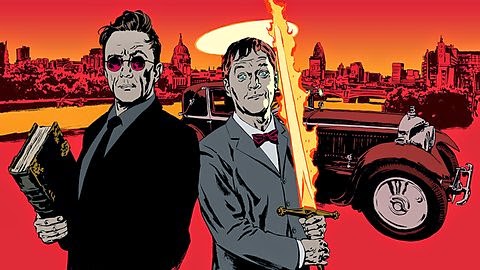 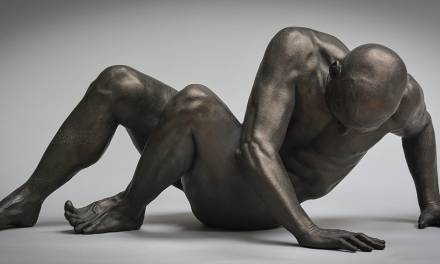 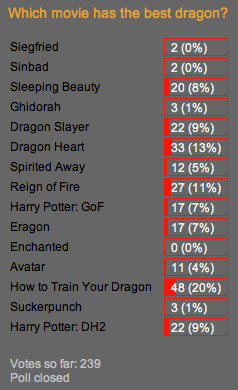