I continued the same approval-in-process with the wax work on Catwoman. Getting an approval of her right leg gave me both. Being able to get the okay on her head meant I could go to finish as I needed. 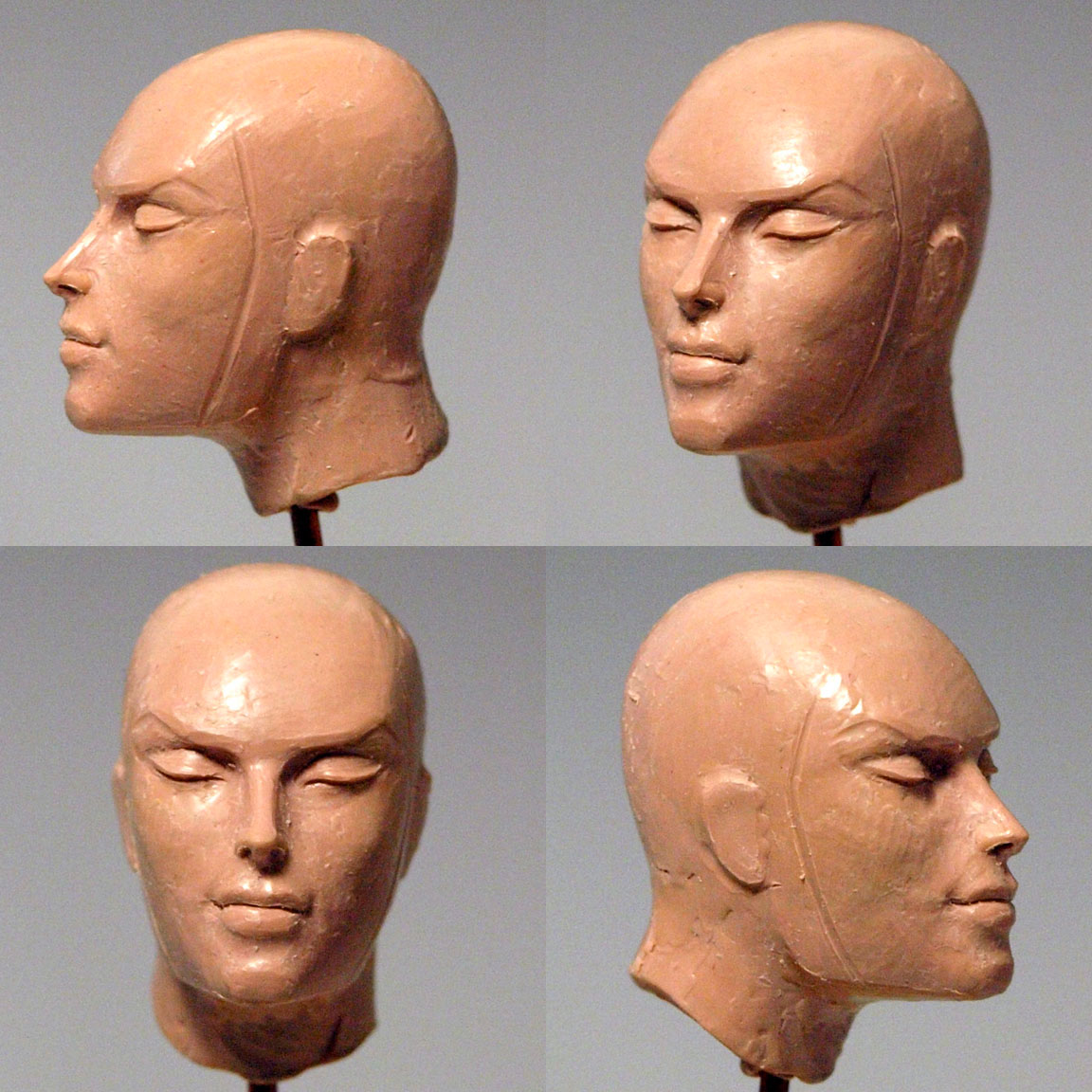 Having finalized the assembly of Batman let me take his body to finish. I’ve been asked what are the advantages of working with wax? One is being able to cast multiples of an element and modify them to make variations on the original. Batman has eleven belt pouches. I sculpted a master, made a mold and cast up copies, modifying them as I went along so no two were exactly alike. I can’t think of another way to do this without costing me a butt load of extra work. 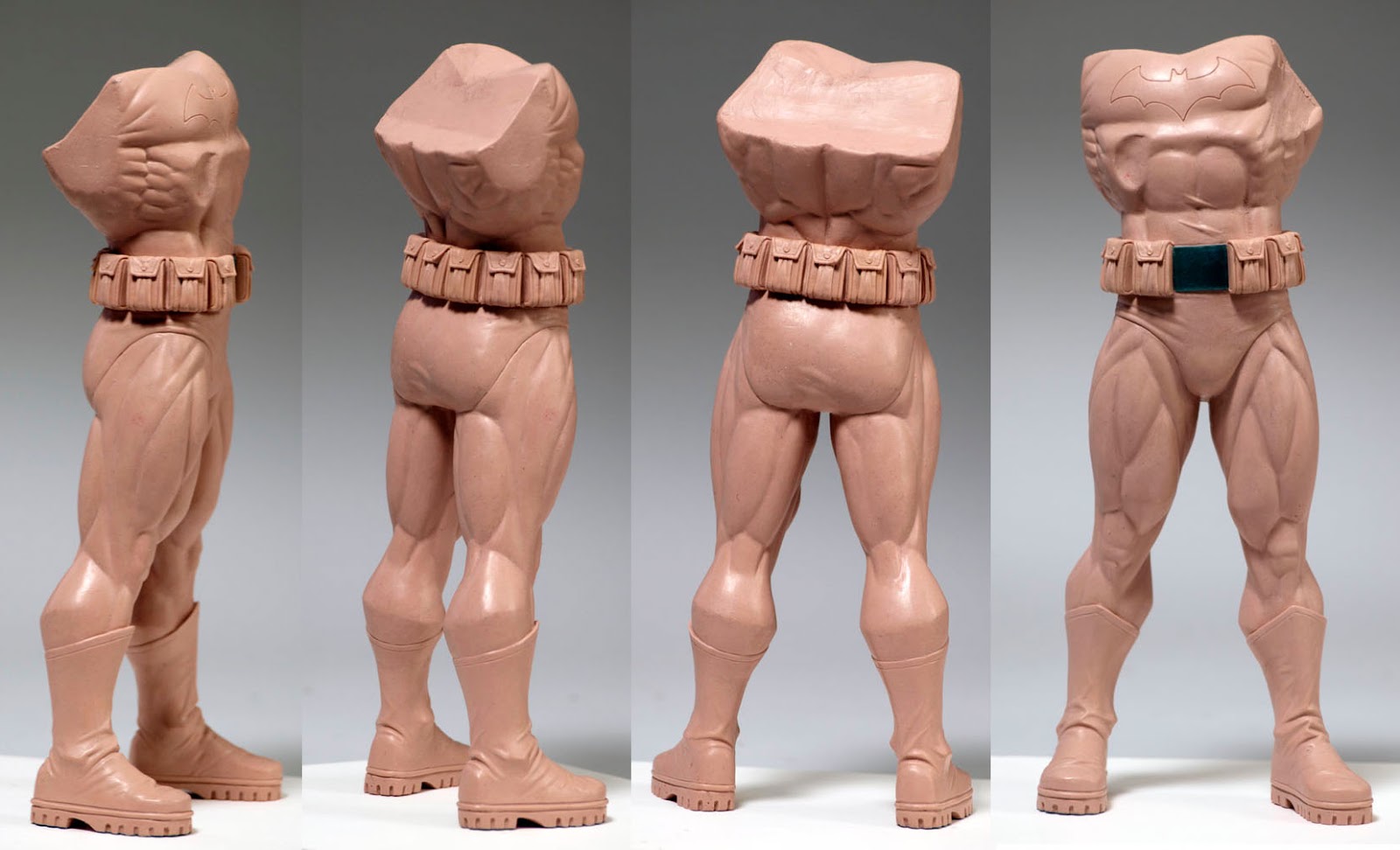 I had nearly all the parts of the statue done and needed to see how they worked together. In particular, how the smoke would play against the body of the base and in relation to each other. I took two set of pictures of each angle; with the smoke units in place and without them and Photoshoped them into position using the opacity tool and removing the color to give me some idea of how they’d look as translucent cast resin pieces. 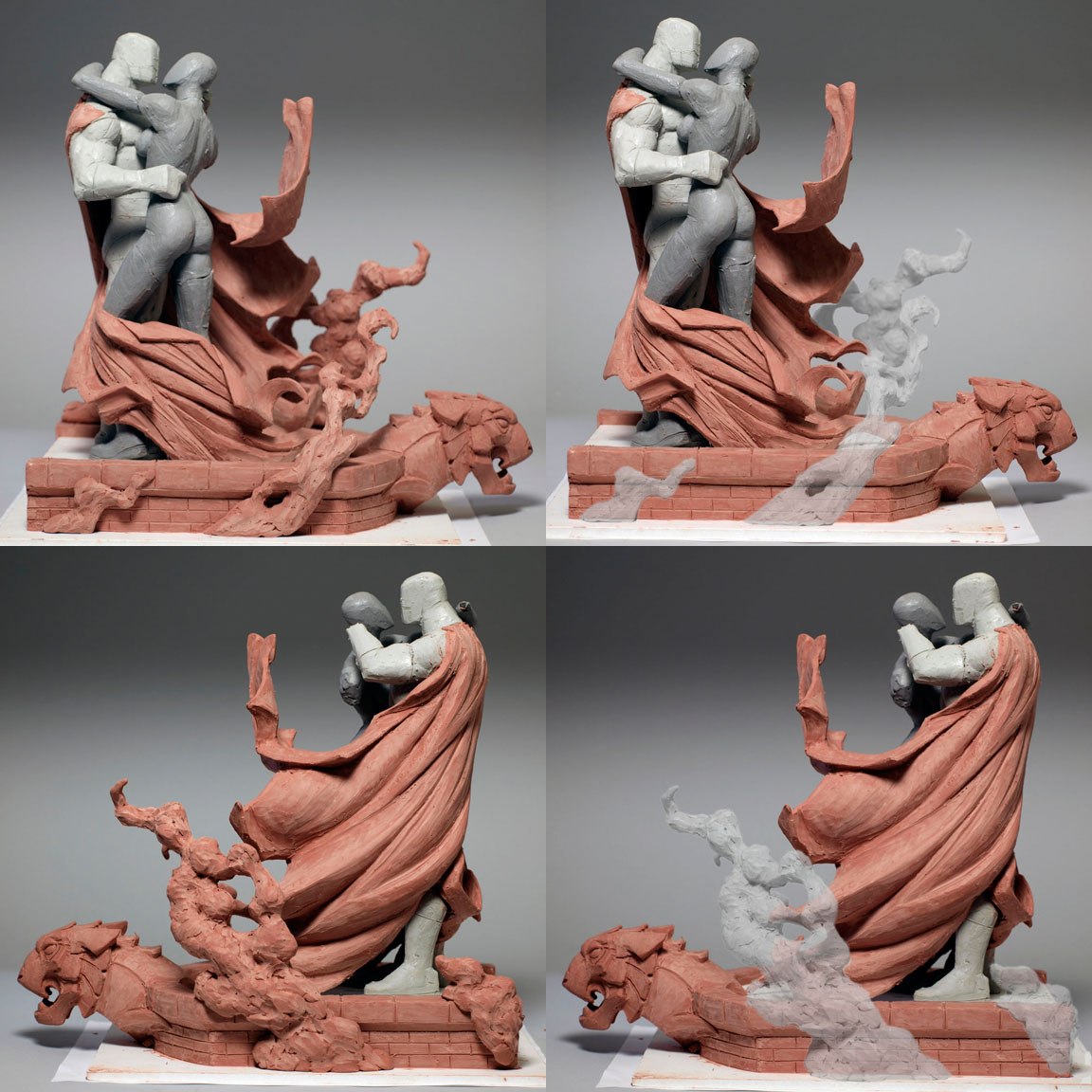 I’ve discussed mapping smoke in a previous post. The trick is to be hyper aware of how contours will play against each other as they are seen through each other. After I had the master molds for the smoke sections, I cast up resin tests to ascertain how dense the smoke needed to be. This test was the most transparent of the four tests I did. 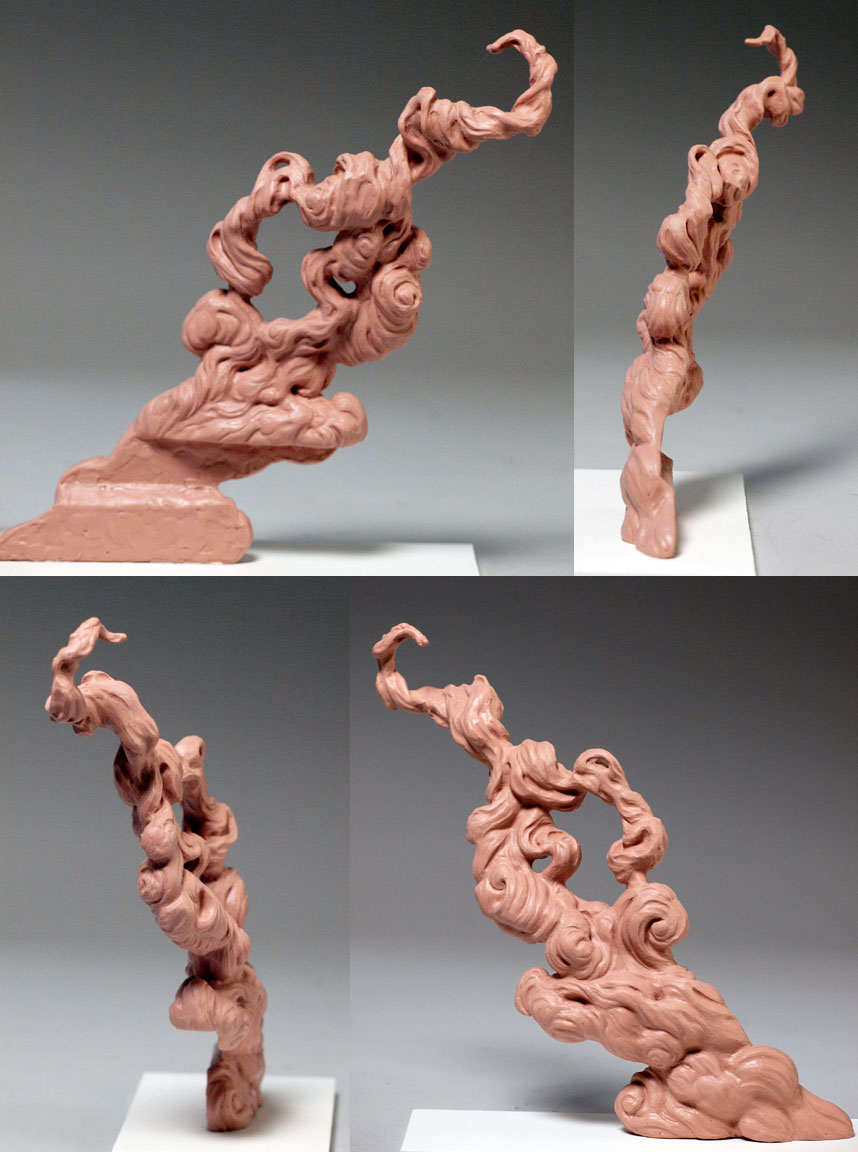 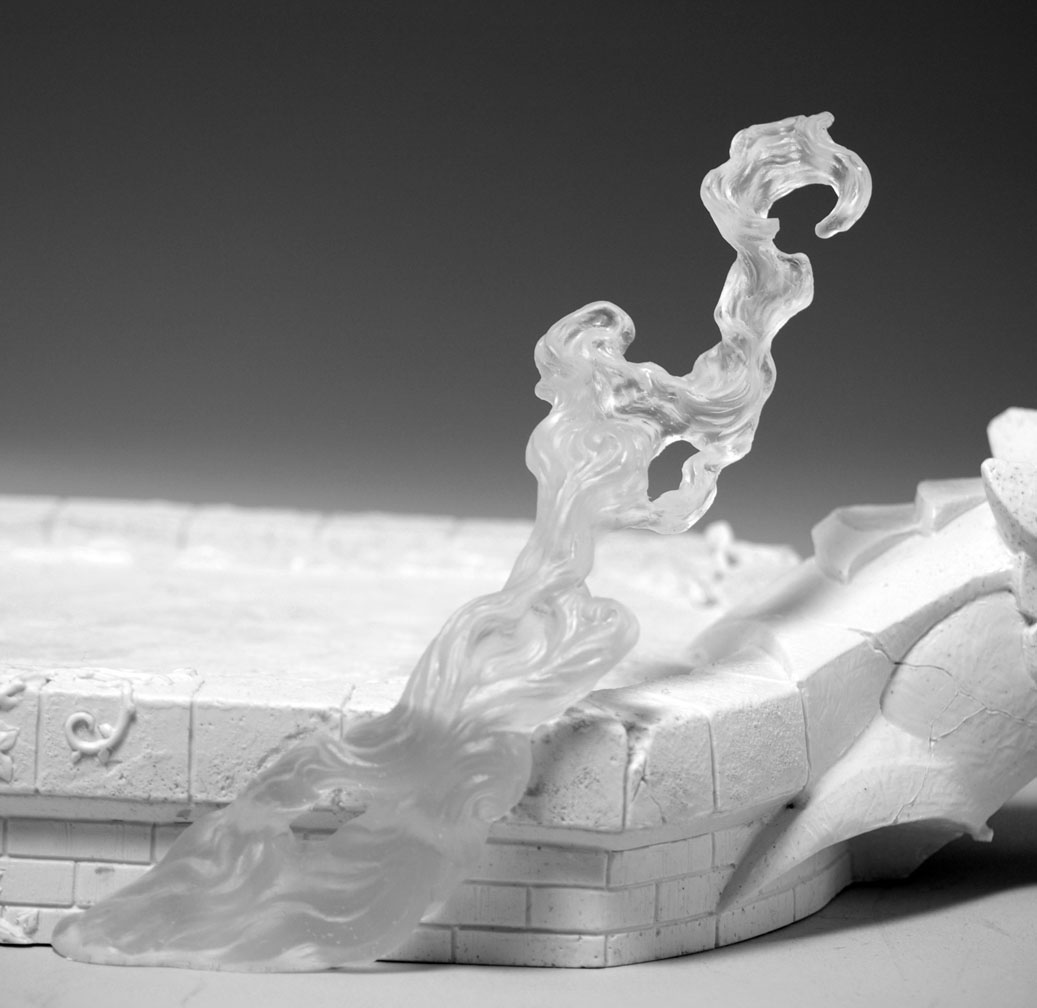 I worked toward finishing Catwoman’s body, making corrections to the clay as I went along. 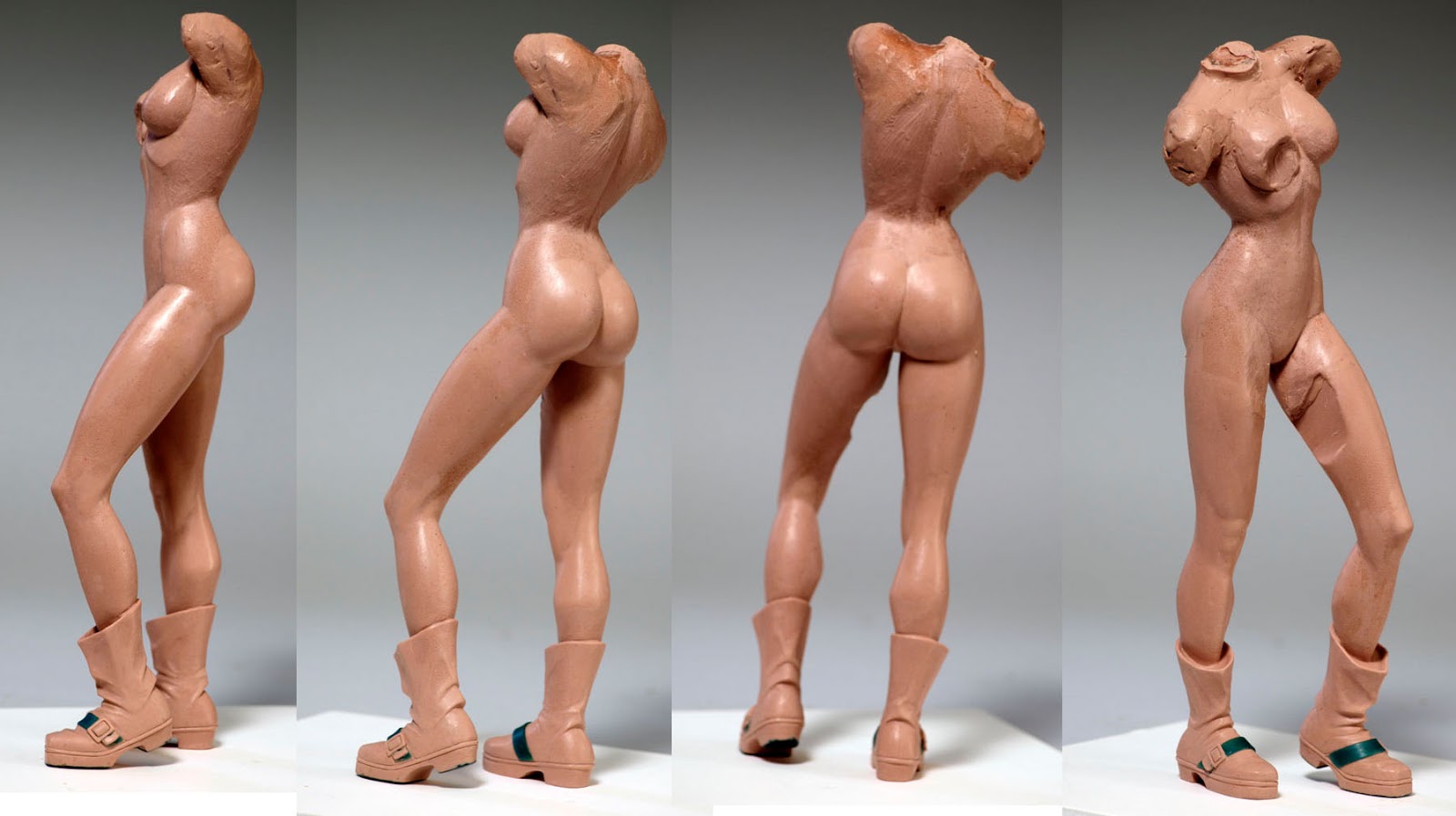 With the first Hush Batman statue, I left markers of Catwoman and Poison Ivy and wanted to do something similar with this statue. I sculpted in two sections of ivy in honor of the role Poison Ivy plays throughout the story. With the master wax of the base complete, I cast a resin and worked the wax smoke sections to the resin for a final fit, then cast all the base parts ready for paint. I tried a bunch of finishes for the smoke, trying to get just the right level of translucency. Sandblasting the resins seemed to work the best. 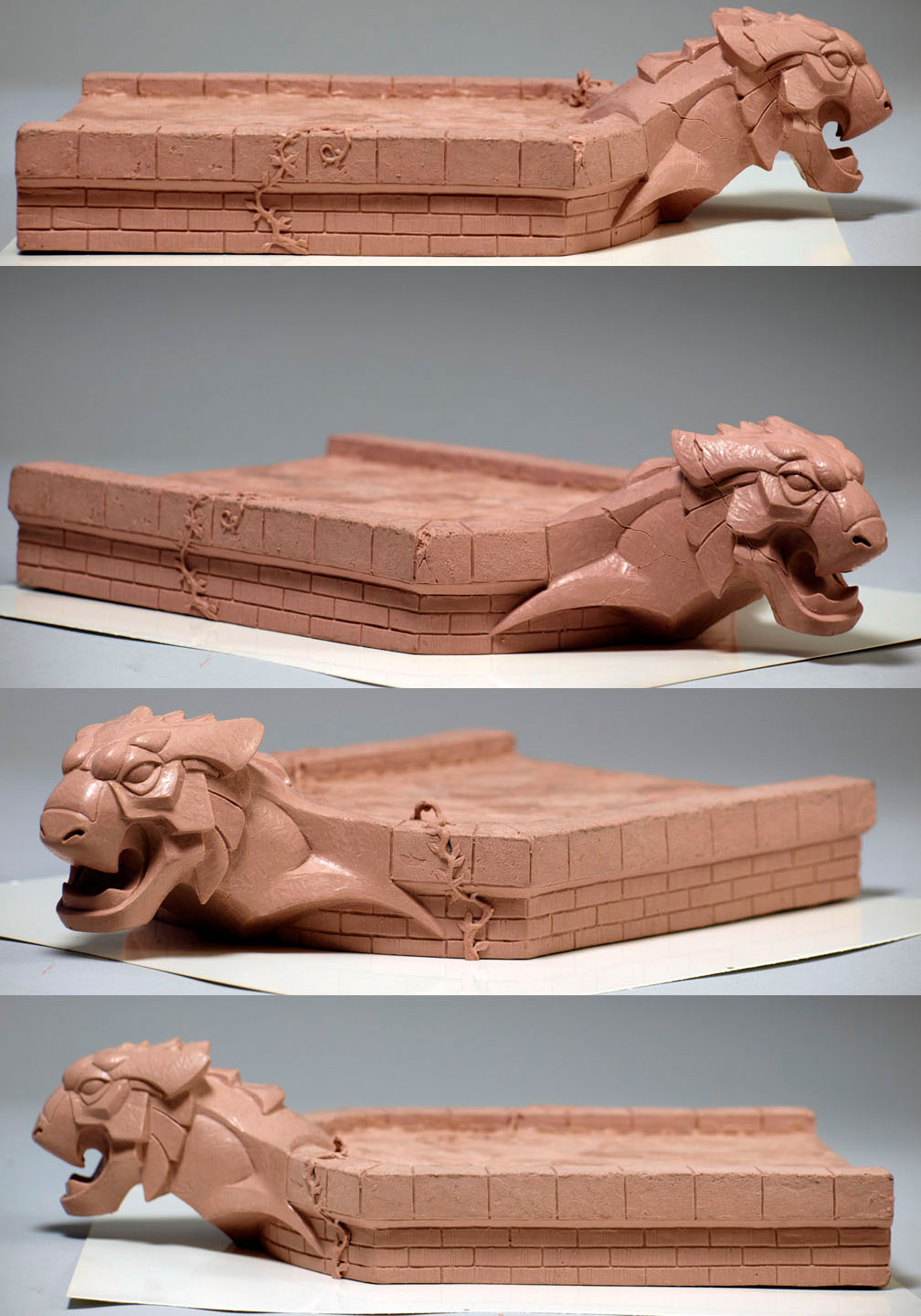 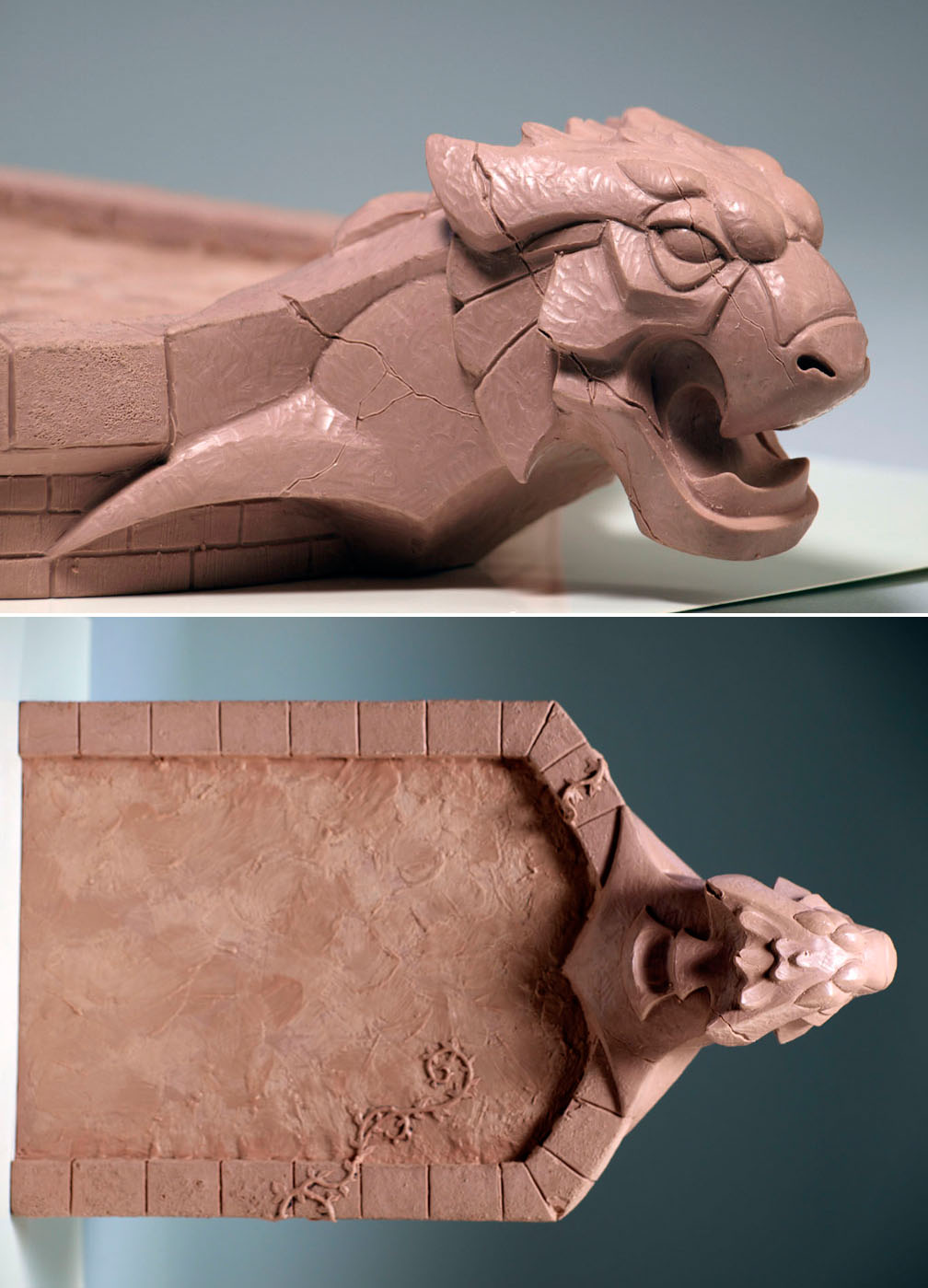 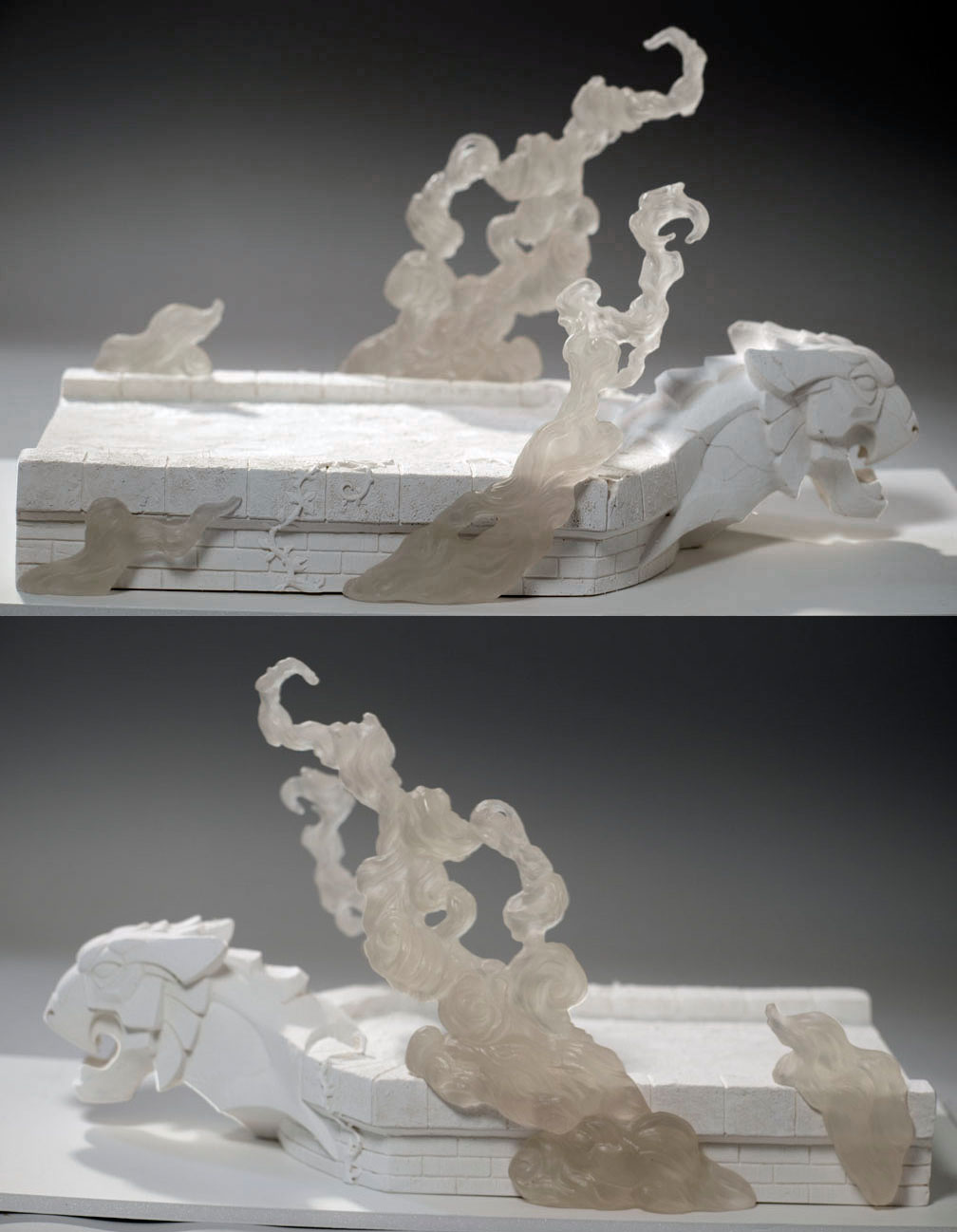 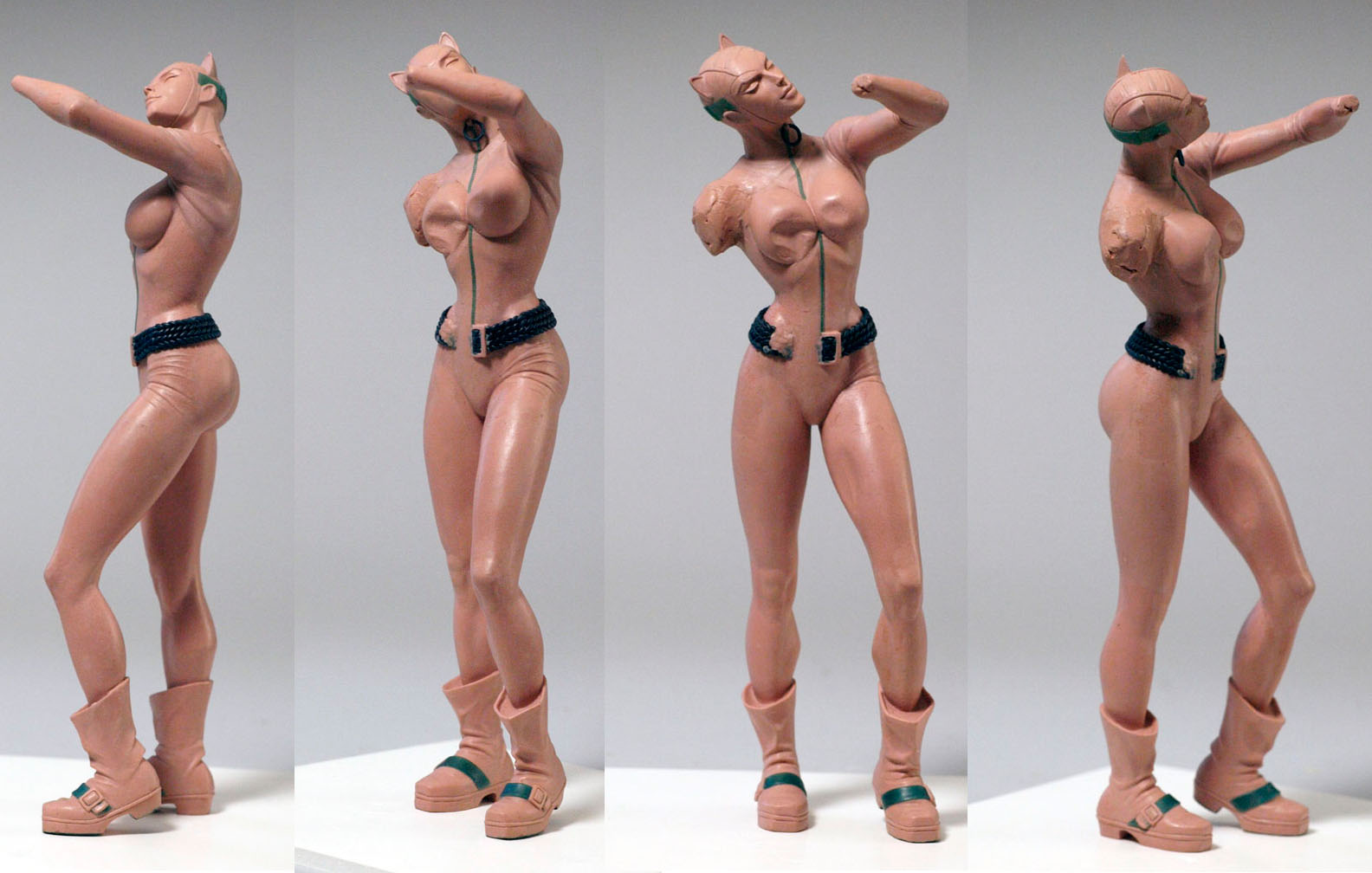 Working the master wax of the cape and the nearly completed Catwoman to a resin of Batman let me lock in final parts positions. I made a couple of modifications to the wax cape and finished it as one piece knowing I’d have to go back later and find the best places to cut it into castable sections. 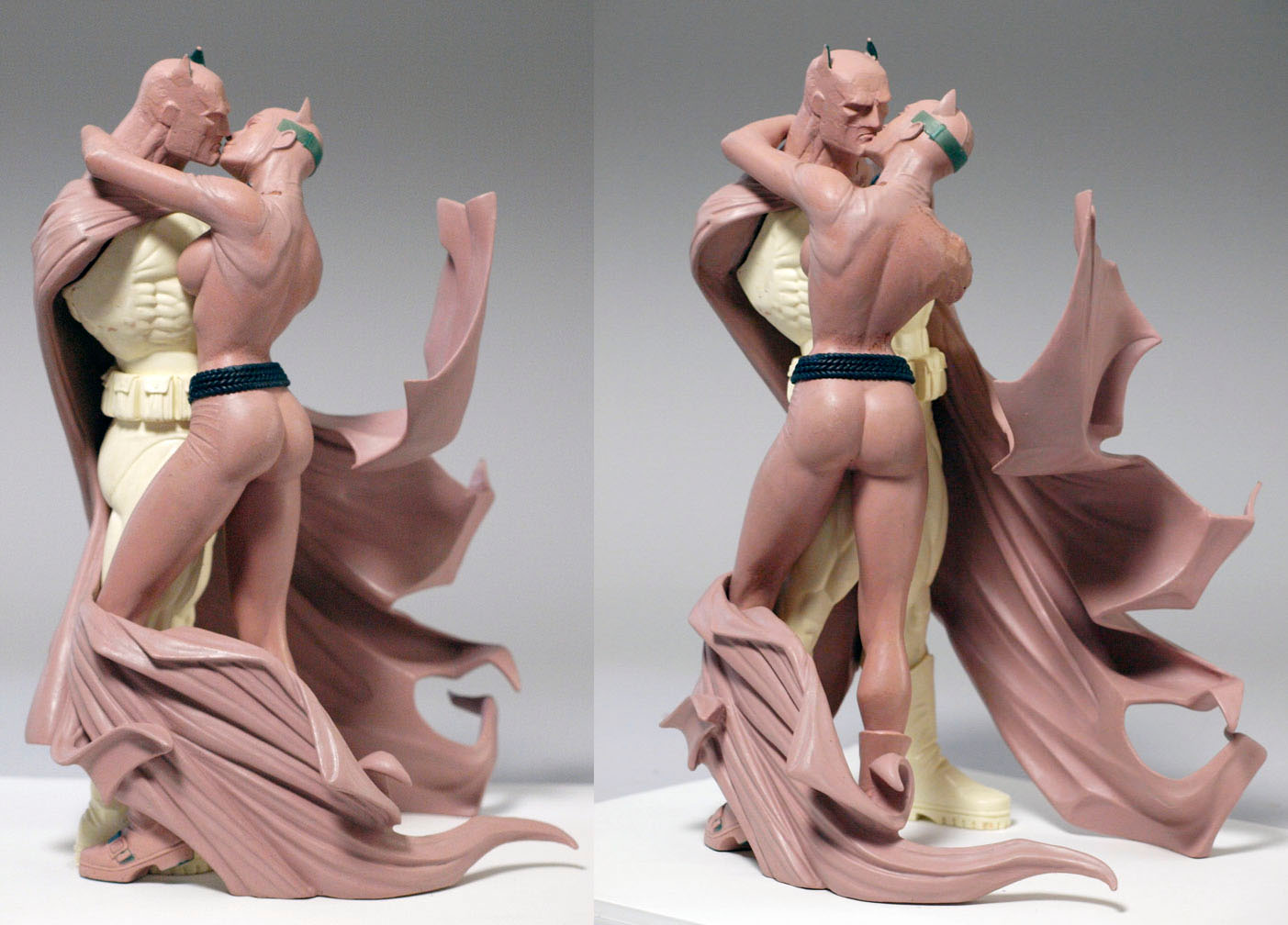 Over the ear or under the ear? In the art, Jim had drawn Catwoman’s goggles band to be positioned behind the top of her ear. He does this a couple of times. After I’d sculpted it according to the art, it was decided to go with the preponderance of the evidence and not this particular frame. I made the adjustment with pix of her arm attachment. 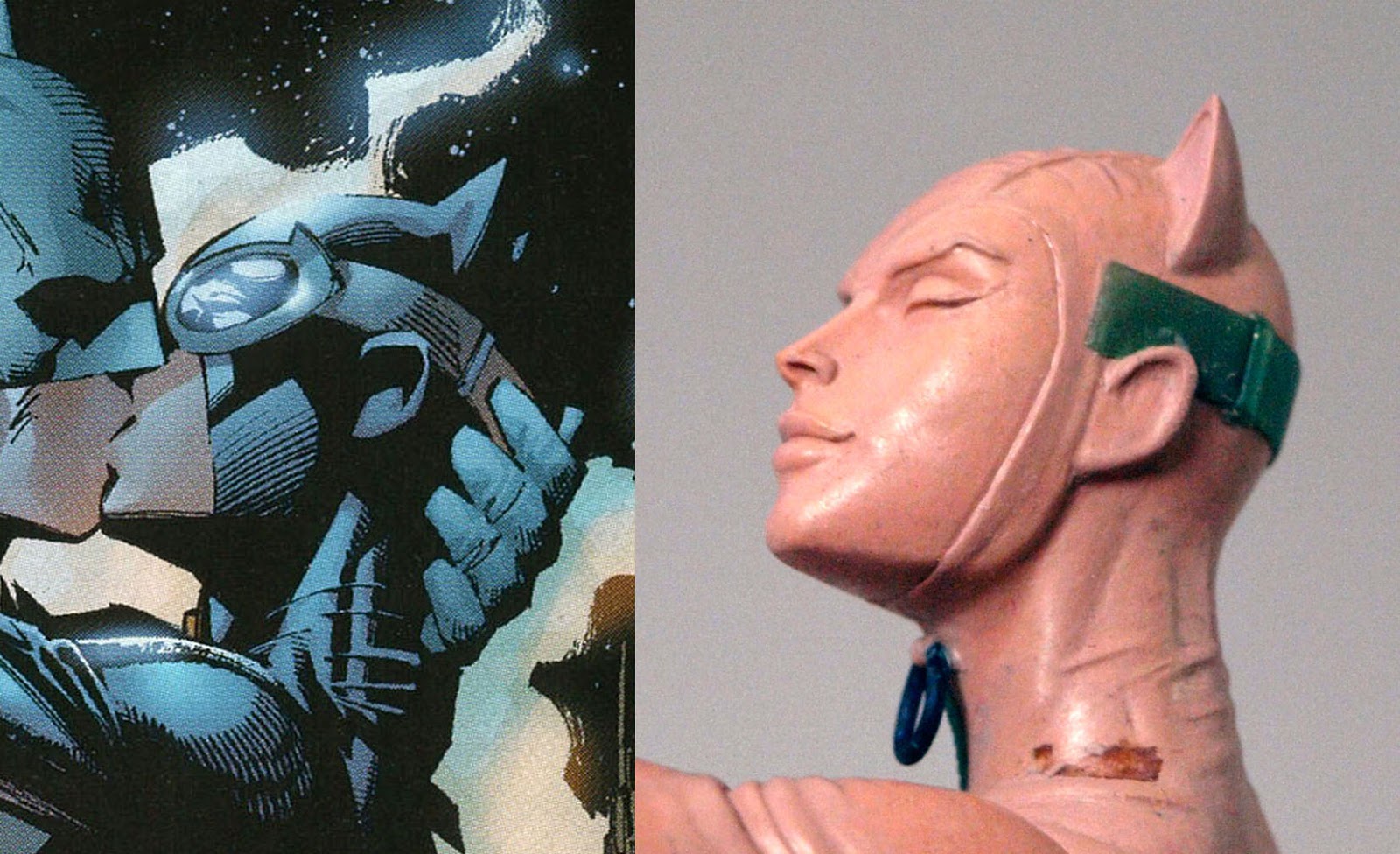 With Catwoman’s head as part of her body, I needed to keep Batman’s head as a separate piece so the factory would be able to make some minor position adjustments to compensate for any casting distortions.