All of this stuff going on lately has me rethinking many things and one of those is our approach to head drawing, and more specifically towards ethnic differences. I want to present a different way of thinking about drawing various ethnic types without thinking distinctly African, European, Asiatic, etc. Part of me is looking for a better way to teach this concept without it becoming a touchy issue, and another part of me want to find a new way to think about ethnicity so that for character designers and creature designers we have another approach towards the different races of aliens, fantastical creatures, etc.

We are who we are because of who conceived us, our lineage, and where we live. This is partly how I teach my character design classes, looking into the regional effects on the human body and on the creatures that live in the same climate and how the bodies of both have adapted to the climate, the ground, the foliage, predators, etc. Starting with something truly believable might seem like it would limit our design choices but quite the opposite happens, there is more freedom to design well because the choices are no longer so “blue sky”, they are bound within a space we have to work with.

I start the class with as much objective information as possible on how region effects the body. I look at character design with these two concepts first:

1. Latitude radically tweaks the environmental physiology of the body.

2. Coastal Living vs. Continental Interior Living tweaks the environmental physiology of the body.

Then, I add a 3rd element to this formula for the “theatrical” or “truly conceptual” portion of the design:

3. Change the chemical content within the planetary atmosphere, its liquid bodies, etc. or change the physical makeup of the planetary design (physical) to add an additional challenge to your design.
or

4. Place an extreme limitation in this world space that will shift the design of your character/creature to adapt.

The following is some of the scientific data I hand out. I pulled this from:  australianmuseum.net.au

Humans today show an enormous diversity in appearance, however this diversity was not apparent in early Homo sapiens. Early members of our species lived in Africa and had evolved physical characteristics that were similar to each other in order to survive in that climate. When humans started to spread to different parts of the world about 100,000 years ago, they encountered a variety of different climatic conditions and evolved new physical adaptations more suitable to those new climates.

Recent DNA studies (since 2007) confirm that genetic traits have changed or adapted to new environments during this time. In fact, the rate of change of DNA, and thus the rate of evolution, has accelerated in the last 40,000 years. Areas of the human genome still seem to be undergoing selection for things such as disease and skin color.

All one species – how climate affects physical characteristics

Skin Color: Lighter skin allows the penetration of the sun’s UV rays. These rays help the body to synthesize vitamin D. Darker skin protects the body from absorbing too many UV rays. This can cause cancer or destroy important vitamins and minerals.

Face Shape: Eskimos have adapted to extreme cold by retaining layers of fat on their faces for additional warmth. Populations in northern Asia and the Arctic tend to have broad, flat faces as these reduce the effects of frostbite. 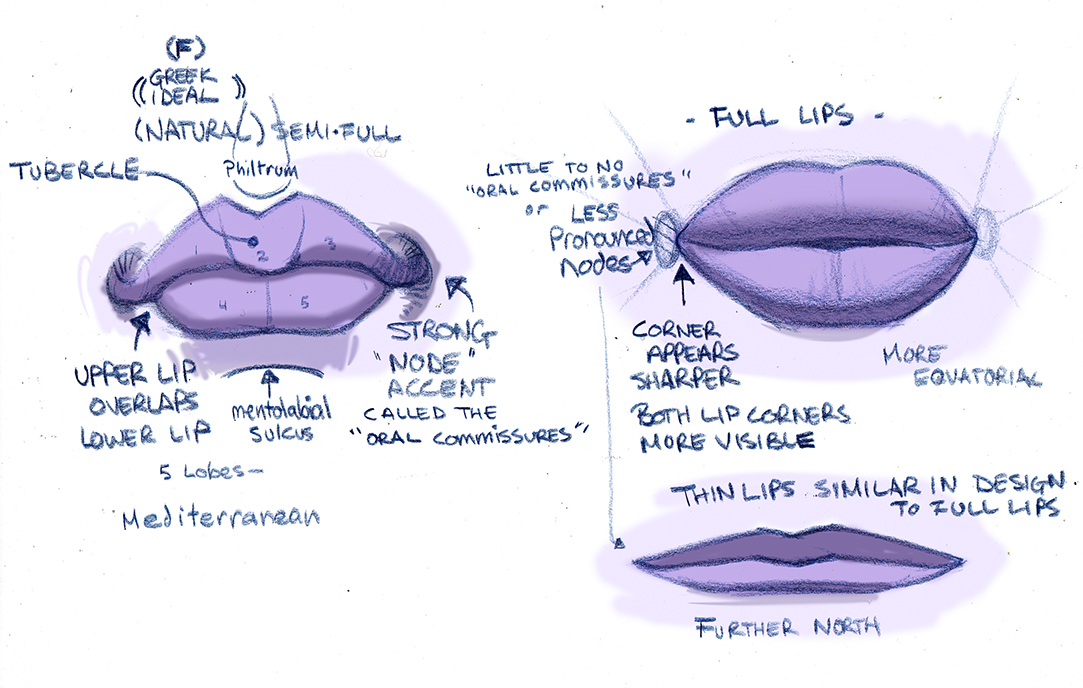 Eyes: The epicanthic fold common among Northern and Eastern Asian populations is an adaptation for protecting the eye from the hard driving snow typical in these regions, and also to reduce snow glare. Blue eyes are better adapted for vision in regions where there is reduced light, as they let in more light than darker coloured eyes. 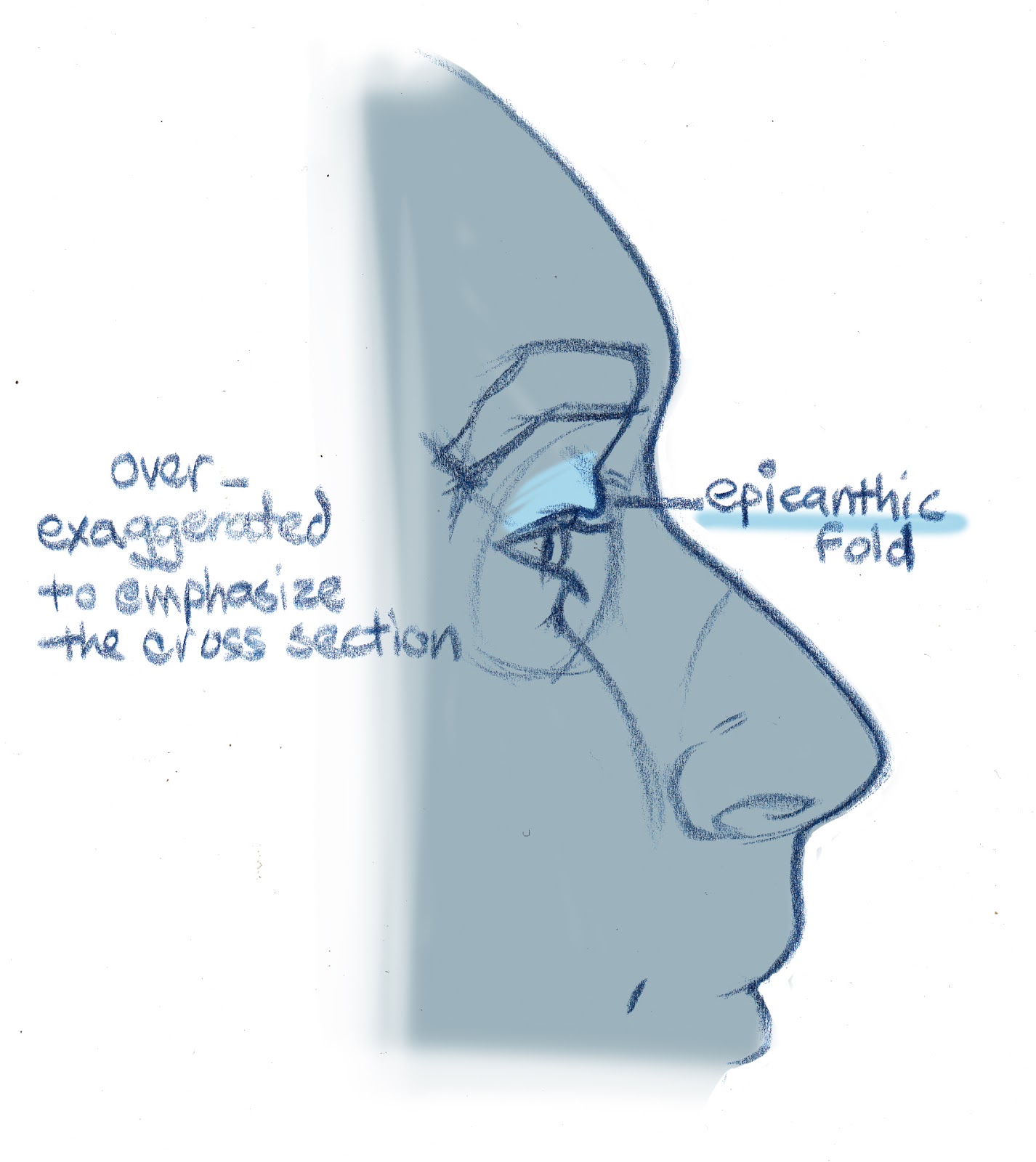 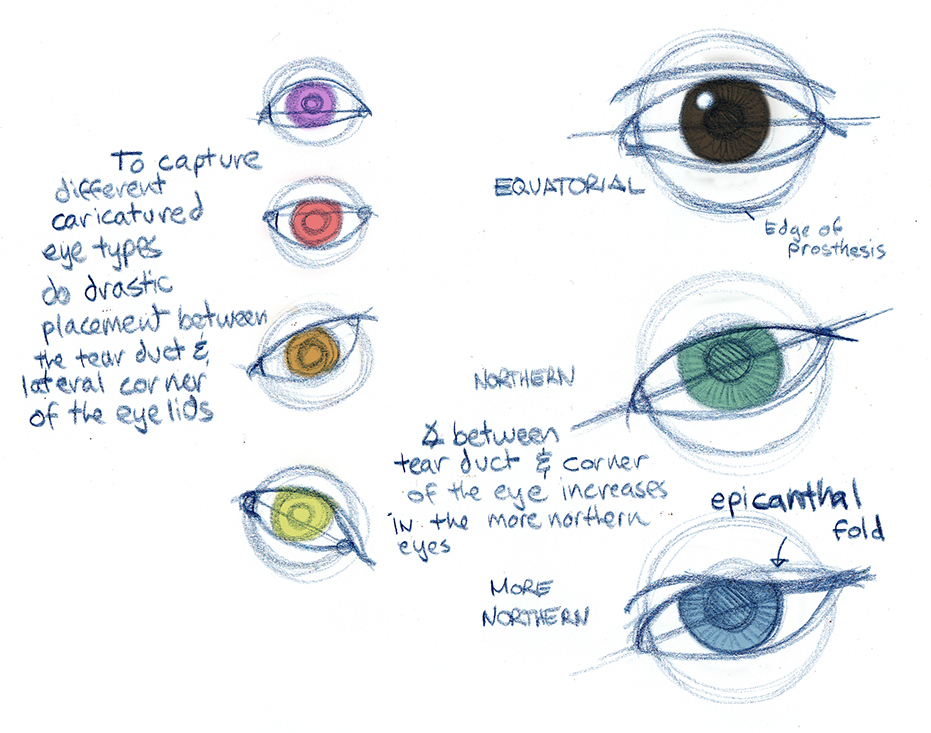 Additional: Australian Aborigines of the Central Desert have an unusual physical adaptation to living in a climate where it can be freezing for short periods, such as during cold desert nights. They have evolved the ability to drop their bodies to low temperatures without triggering the usual reflex of shivering.

Evolution stepped in with a thing called exaptation which is a shift in the function of a trait during evolution that gets in the way and all of a sudden we as a society become selective about who is deemed worthy, beautiful and fit for the gene pool. And we have been selectively breeding out inferior traits since probably before the birth of tribes.

The skull is broken down into three sections, the skull cap, the face mask and the jaw. These sections are where the likeness starts, in the shapes of the bones and their proportions, before any features are placed, the likeness should already be felt. 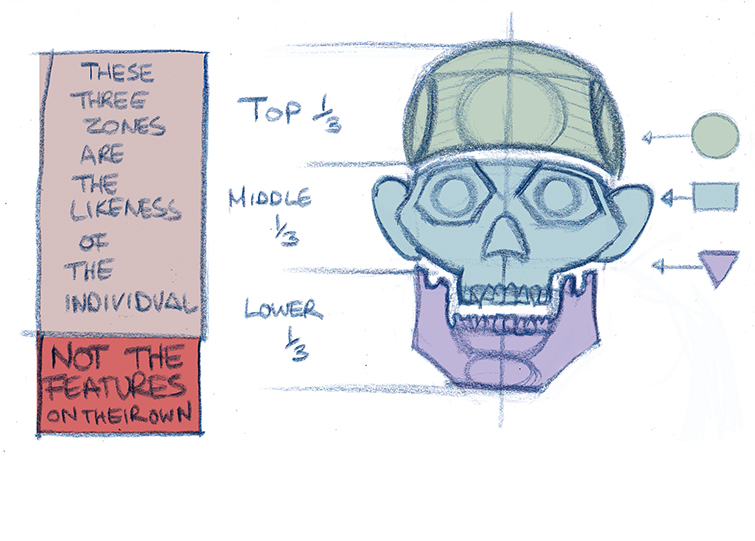 When the glabella is designed, this sets the features up, their proportions, their distance from each other, their relationships to the outer contour of the skull.  If the glabella is wide, the nose will more than likely be wide in the nostrils, matching the width or very close to the width of the glabella. 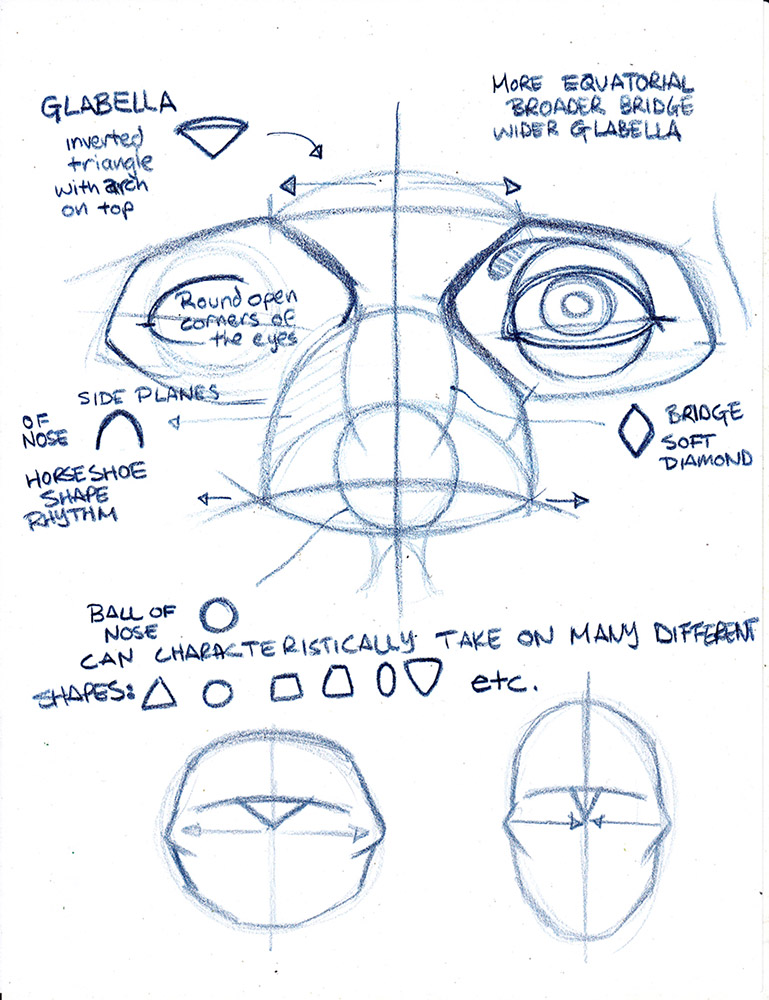 If the glabella is narrow, so too will the nostrils be narrow.  The narrower nose is more indicative of the far north while the wider glabella is more equatorial by design. 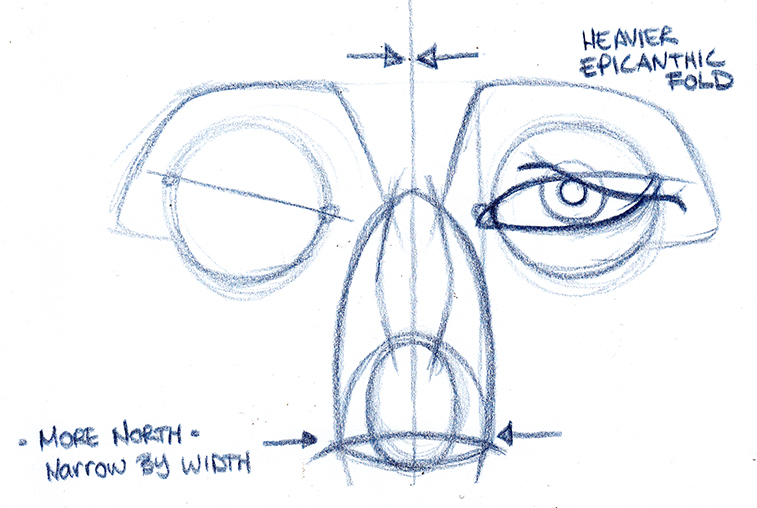 Just like the glabella and the nose working in proportion with each other, the tooth cylinder and the lip type also share similar features.  Thinner lips tend sit over a flatter tooth cylinder type while full lips tend to sit on a more exteded tooth cylinder. 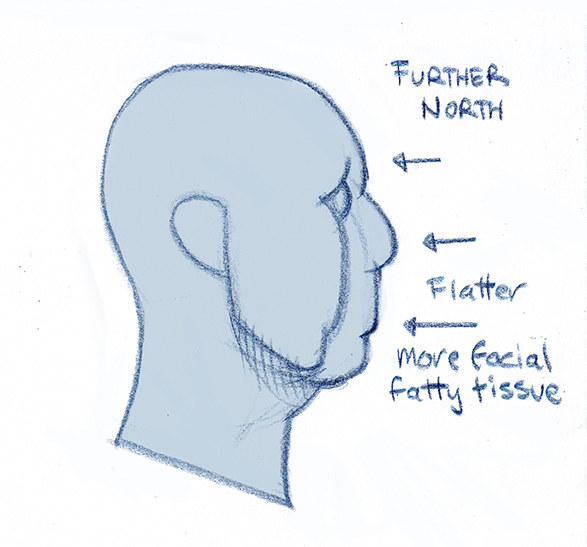 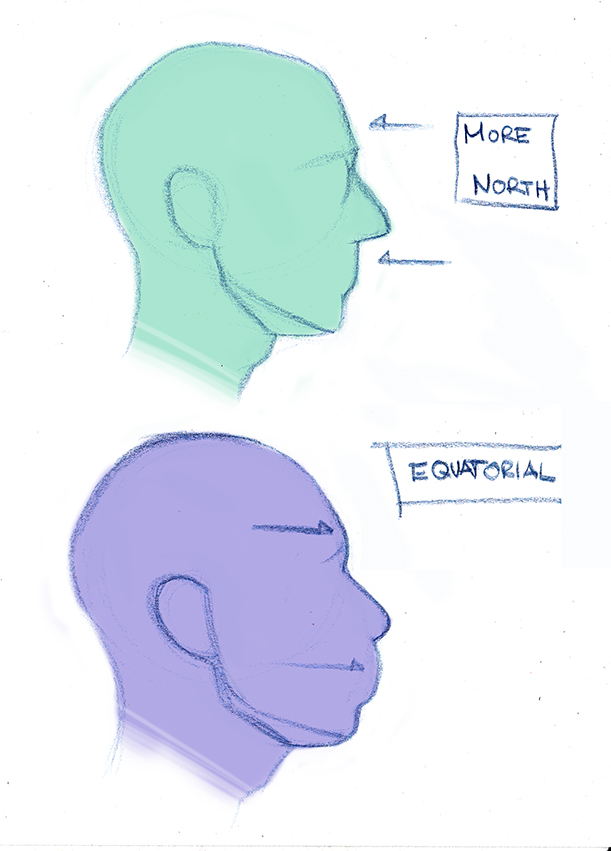 I look at the world through these different latitudinal gradients more than I label people by their race, I see people for how their ancestors were built to survive, and that is exciting to me.  It makes drawing these faces more important with all this history attached, as well as who the individual is and what their personal history is.  These facts help me make choices in how I depict them, and how I push certain traits to help better capture the individual, who they are, what they have come from, what they have lived through. 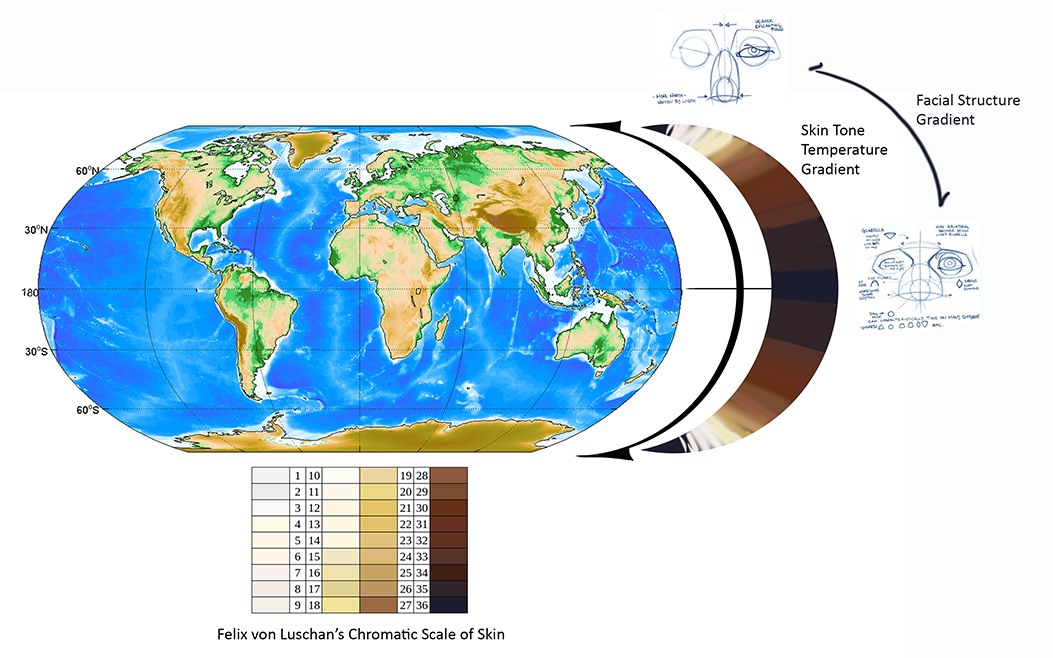 Designing the human form in its many different cultural distinctions in this way is very unique and free of any prejudices in my opinion. It is more about how people are built and constructed to survive the climate and region (past). And though in the present our survival is more about picking a strong mate, we all still carry the genes of our ancestors from long long ago, and as artists we can better identify the global features and traits to make better portraits of each unique individual that really lives, lived on this planet, or is invented to walk on an earth like planet.

I will go over the Values and Skin Tone mixing processes in my next post. 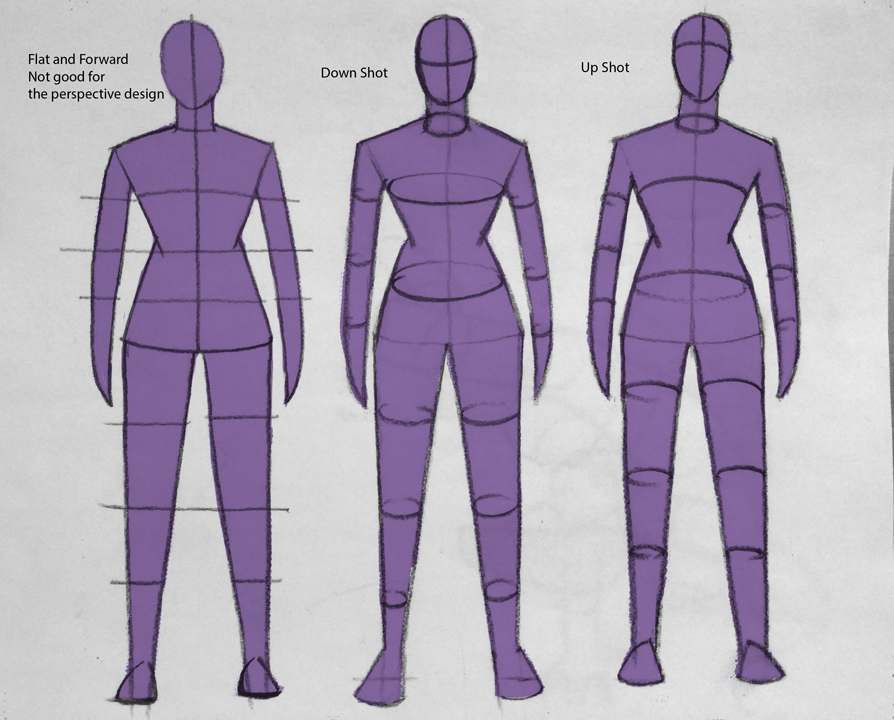 Perspective and Elevation in the Figures You Draw 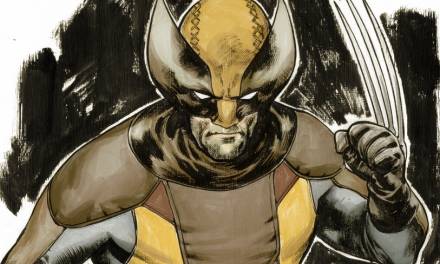