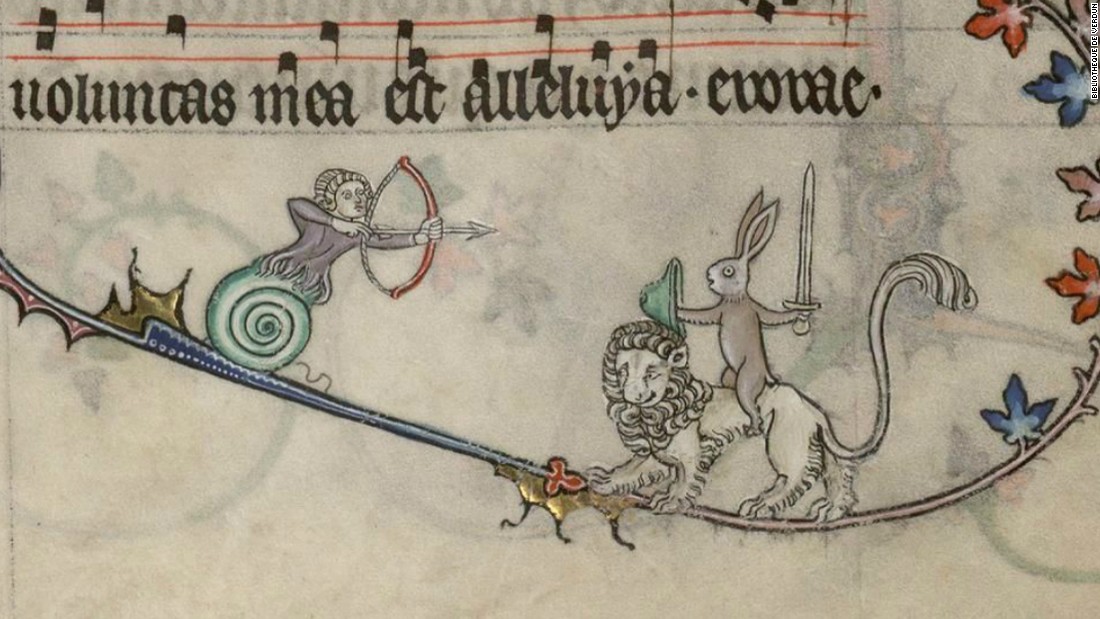 Daffodils, ducklings, dreamy days – Springtime returns this weekend and Easter is just around the corner. In celebration of this most fecund time of year, today’s feature is (what else?)… the Best in Bunny Art! You know what Tennyson said, “In the Spring a young man’s fancy lightly turns to thoughts of…bunnies?”

For some odd reason, it always seemed to me that in every artist’s career, at some point they’d inevitably be drawn to create pieces featuring each of these three things: rock/paper/scissors, a boat and a bunny. Bunnies, rabbits, hares, cottontails, coneys – call them what you will, these little fuzz balls of cuteness are as ubiquitous in the history of art as are their breeding habits. As a subject matter that’s inspired artists for eons, the interpretations are as varied and creative as Iain McCaig’s imagination.

Off we go – Down the rabbit hole! 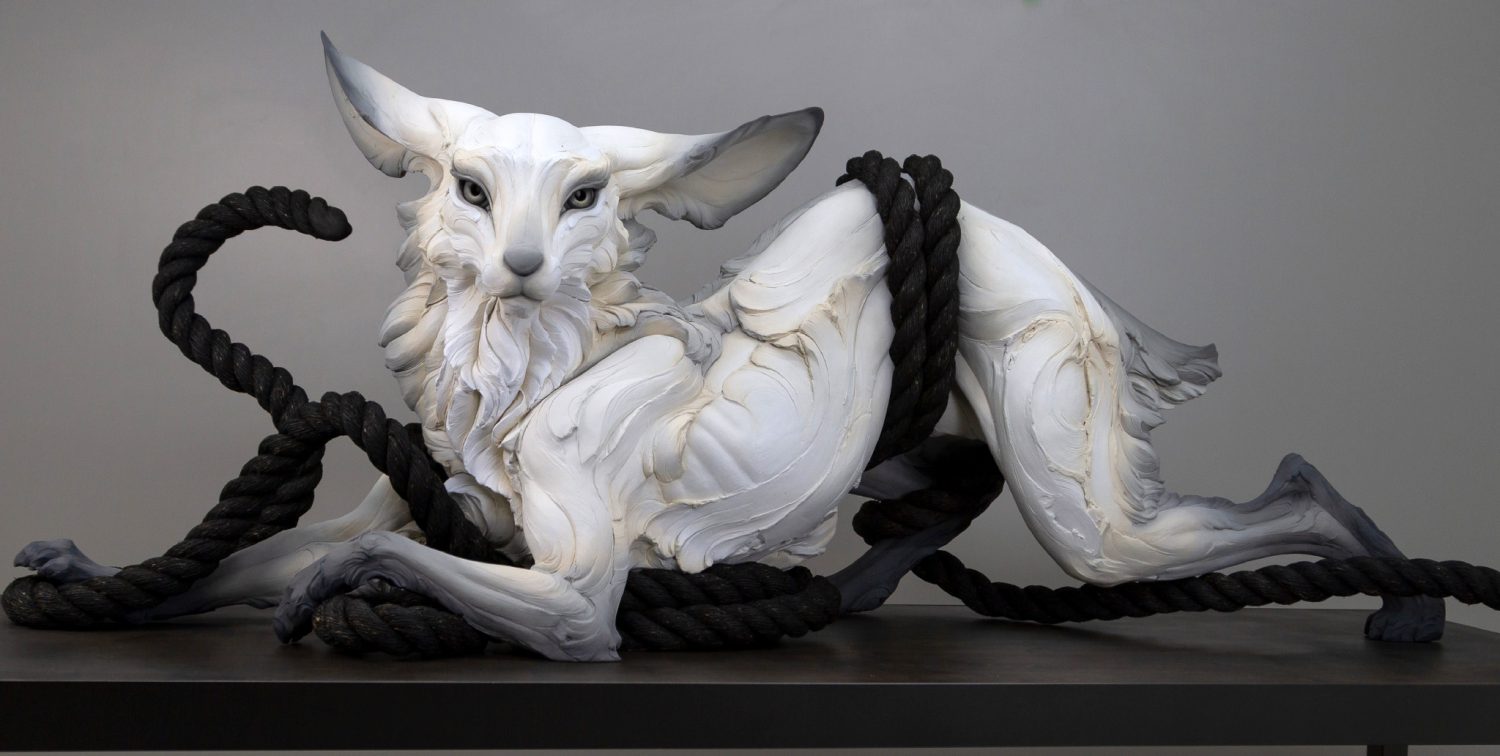 No article about rabbit art could even begin without mentioning the virtuoso sculptural work of Beth Cavener ( https://followtheblackrabbit.com/ )

It would take a solid Master’s thesis to thoroughly cover the history of family Leporidae in art, but without “rabbiting on,” here’s a very brief overview, along with some contemporary imagery counterparts. 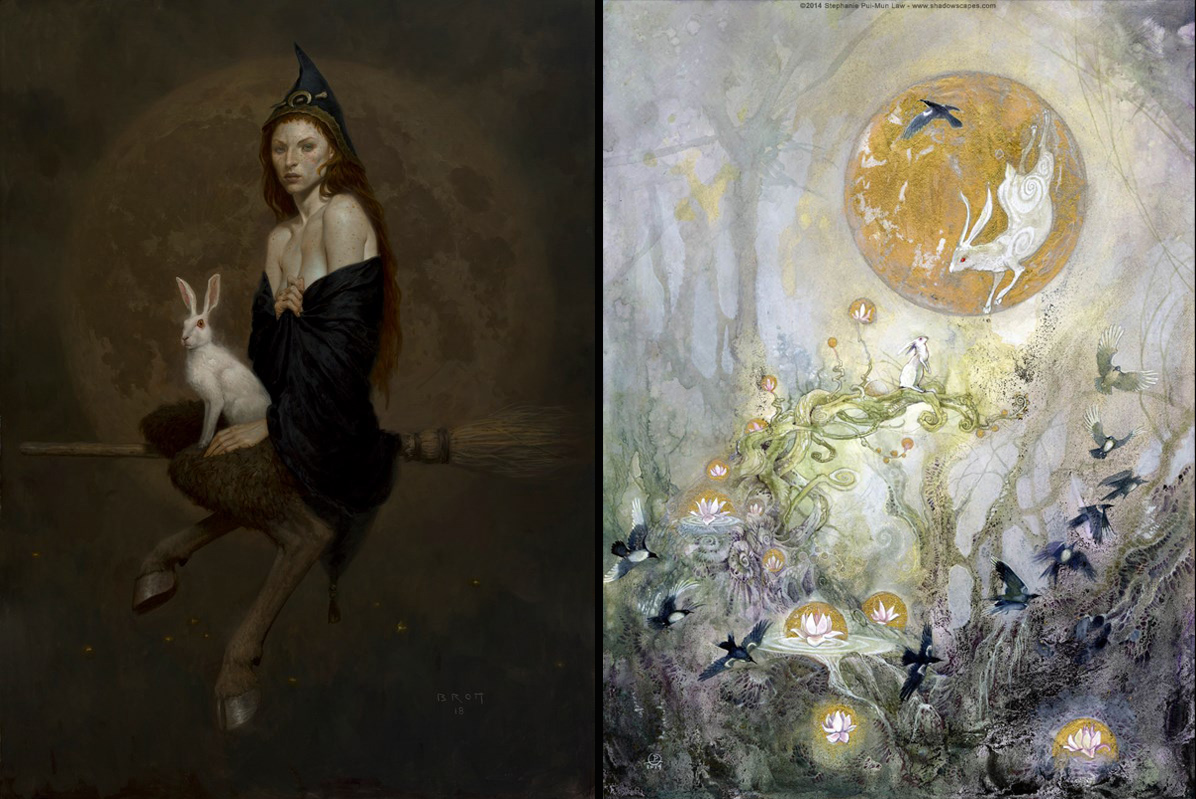 In numerous ancient cultures, rabbits were associated with the moon, nighttime and the underworld. Stories of rabbits sleeping with their eyes open (many an artist pulling long hours to get a commission done are familiar with this tactic) contribute to their legendary status as vigilant observers. 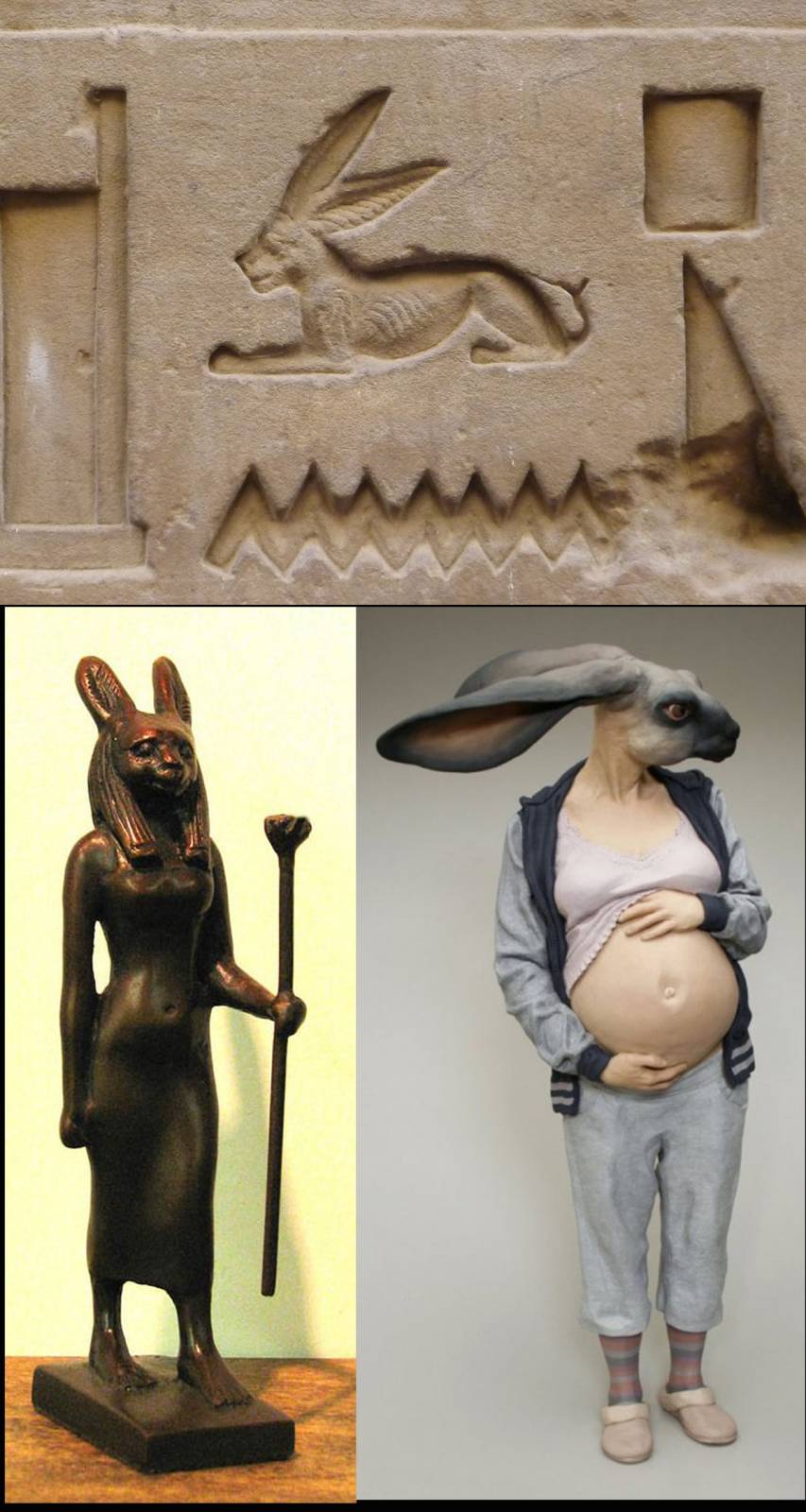 (CCW from top: 1. In ancient Egypt, rabbits got their own hieroglyph. 2. Later Egyptians featured the hare-headed Goddess of the underworld, Wenet, in their mythology 3. Contemporary ceramic artist Alessandro Gallo’s pregnant rabbit woman could be a modern day goddess (http://www.alessandrogallo.net/ ) 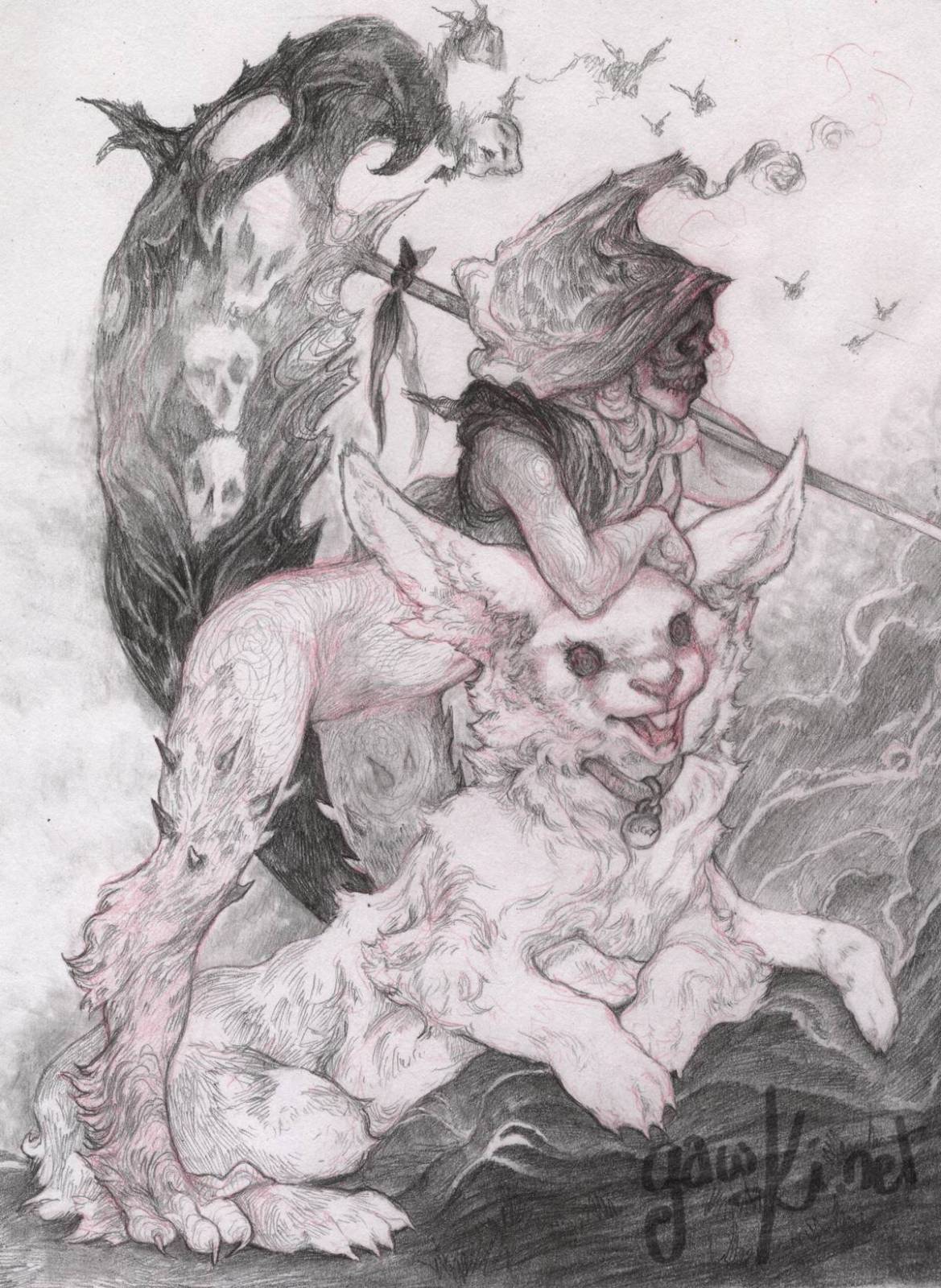 Gawki’s “Death” is a contemporary linking of rabbits and the afterlife. (https://www.gawki.net/)

Known for their wooden sculpture and elaborate mask dances, the Dogon are an ethnic group native to Mali, West Africa. Acting out cosmic myths, Dama dancers wear masks believed to contain the life force that animates both humans and animals. Dancers wearing the rabbit mask may hide or flee from the “hunters.” Masks can help us hide and simultaneously release the hidden inside ourselves as seen in Vonn’s drawing, “Battered Bunnies.”

In other parts of the world, The Three Hares motif is a revered visual riddle: “there are only three ears, yet each hare has two.” This trio has been depicted in sculpture, stained glass and painting through the ages. Referred to as “Tinners’ Rabbits” in England, this kin of the triskelion can be found in buildings and manuscripts across the UK, Europe and Asia. 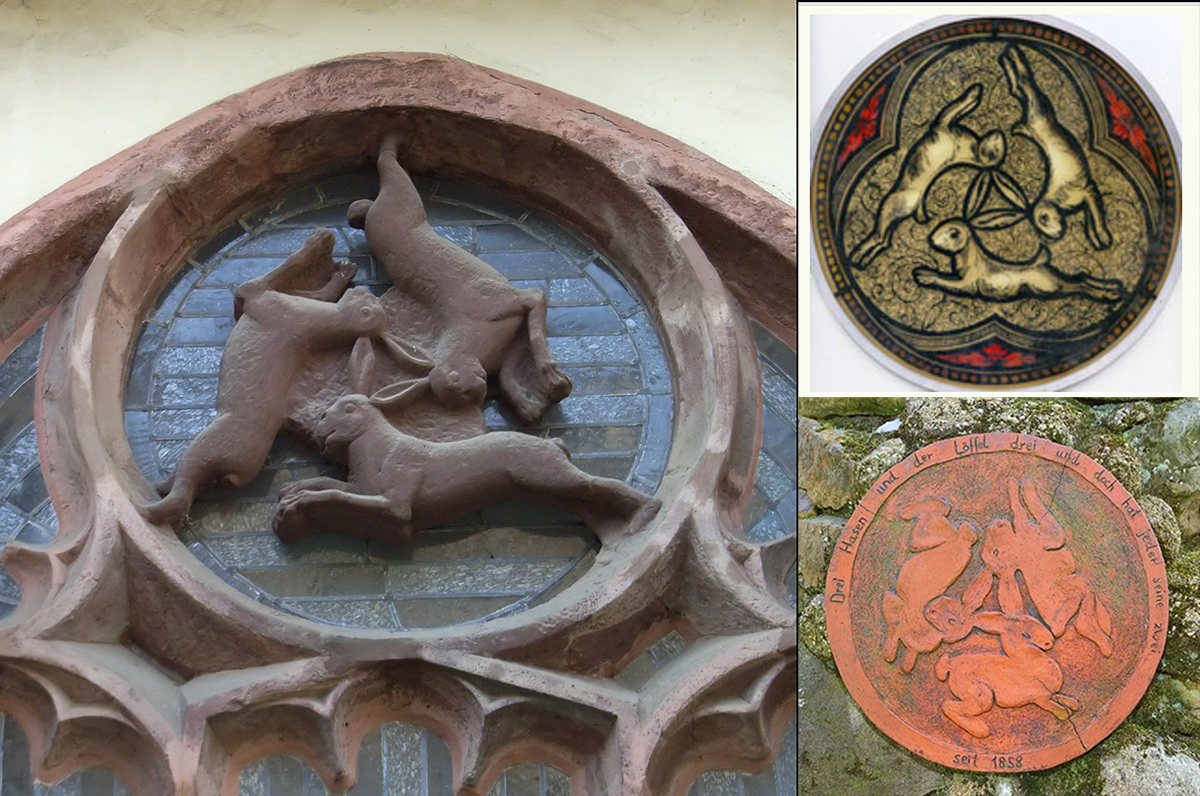 Some of the earliest examples of the three hares have been found in Buddhist caves in China.

Featured as the luckiest animal in the Chinese zodiac, the rabbit is prominent throughout Asian storytelling. A white hare is said to inhabit the moon and is seen as a symbol for charity, longevity, cleverness, elegance and peace. Similar to John Steinbeck’s quote, “Ideas are like rabbits. You get a couple and learn how to handle them, and pretty soon you have a dozen,” rabbit stories and folktales abound throughout Asian culture. Rabbits show up everywhere from stunning Netsuke to bronze sculpture to unparalleled printmaking. 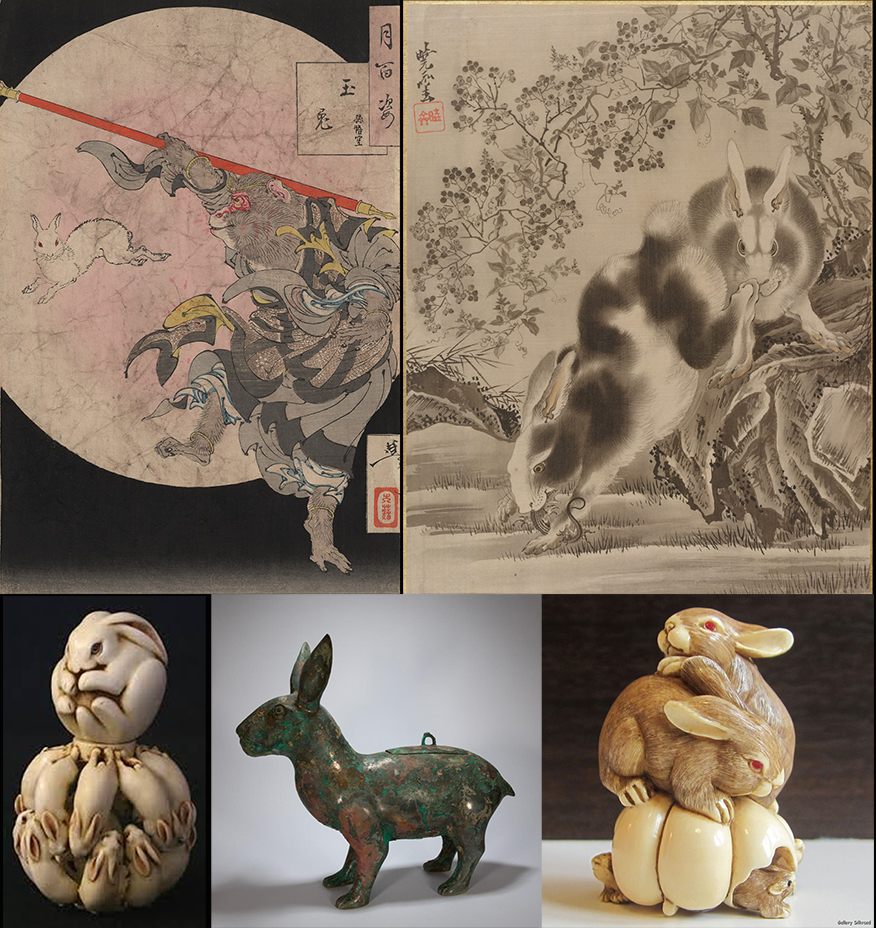 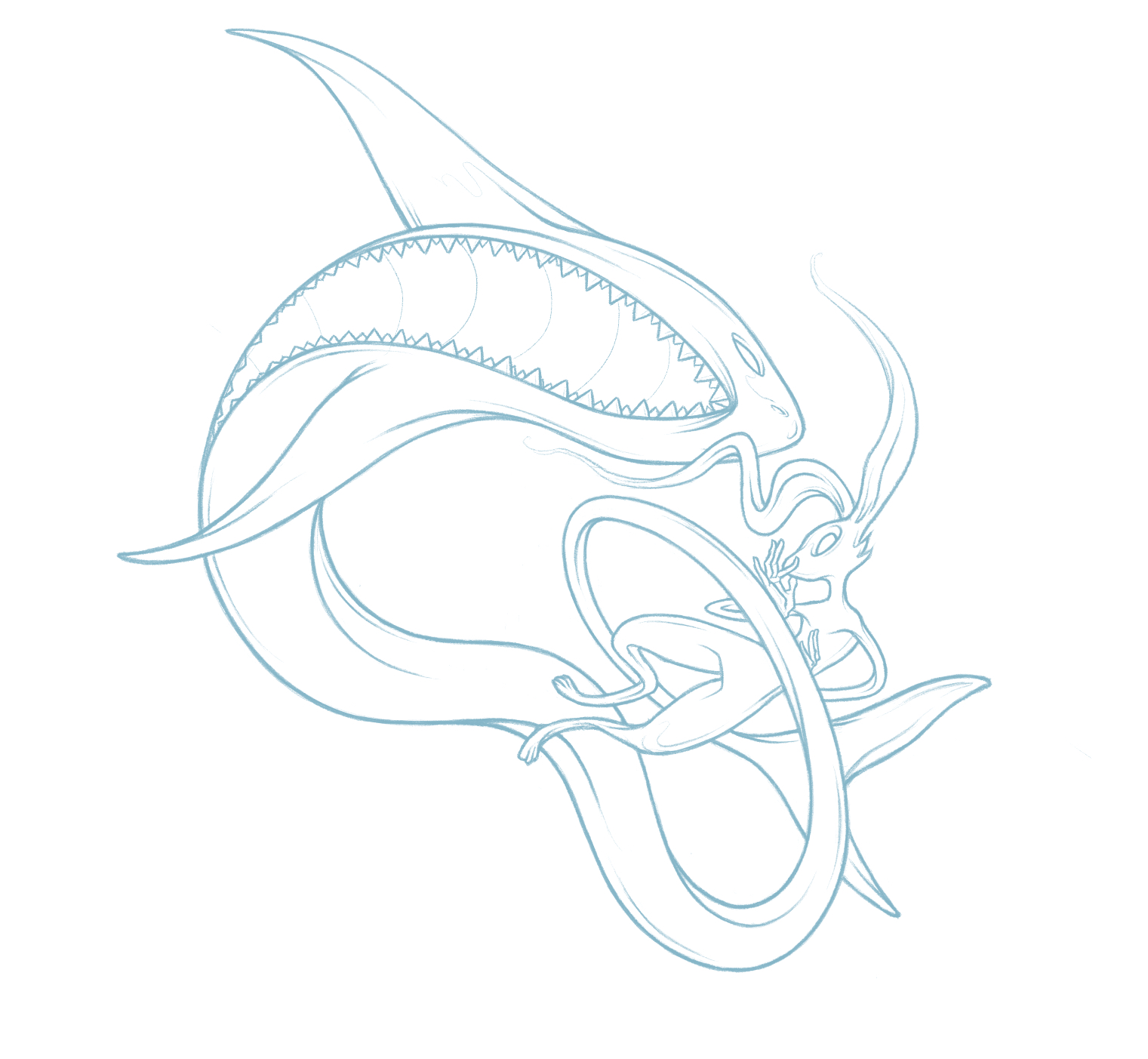 Aedan Robert’s preliminary sketch for a painting of one of the stories of the White Hare of Inaba from Japanese mythology. ( http://aedanroberts.com/ ) 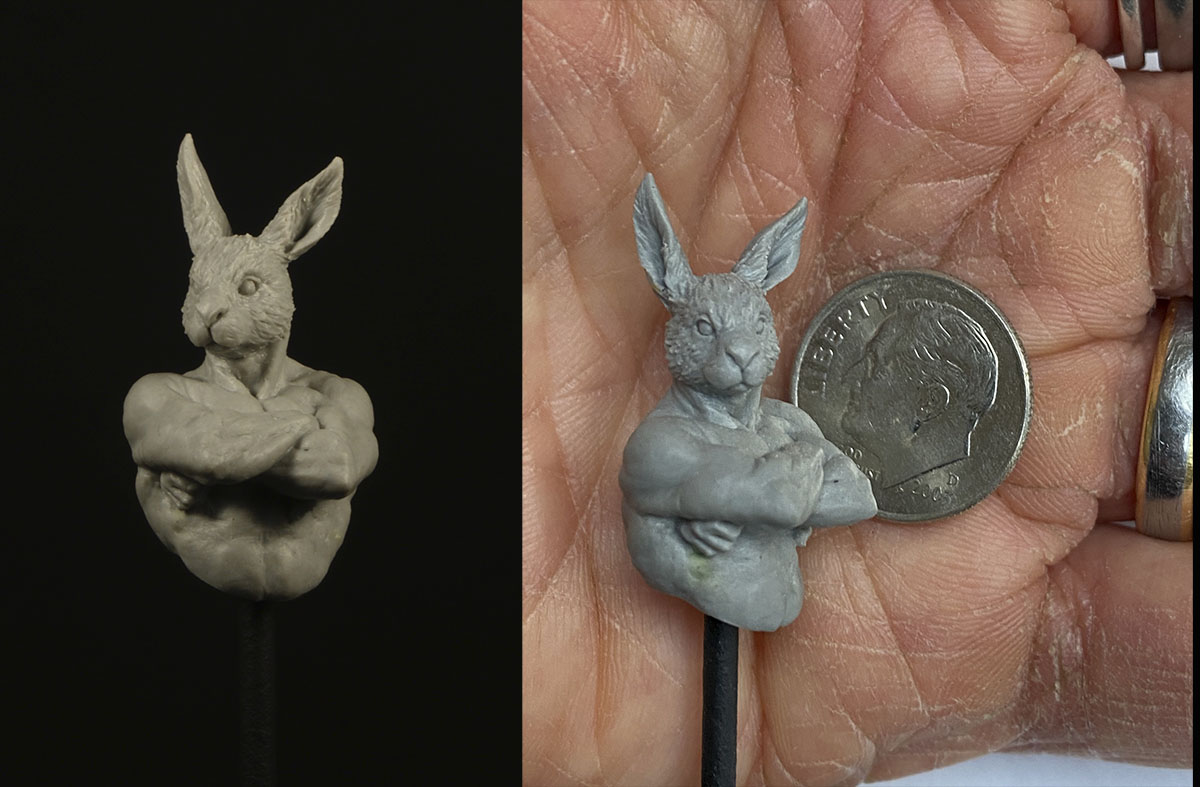 Netsuke are tiny, delicate pieces of art. Speaking of miniature, intricate sculpture, from my personal collection, Patrick Masson’s “Buff Bunny” is quite literally the size of a dime! ( @patrickmasson_sculpture )

Along with their swiftness, humans have long revered rabbits for their keen senses and agility. Their nimble acrobatics and lithe suppleness lend themselves well to curvilinear depictions in art. 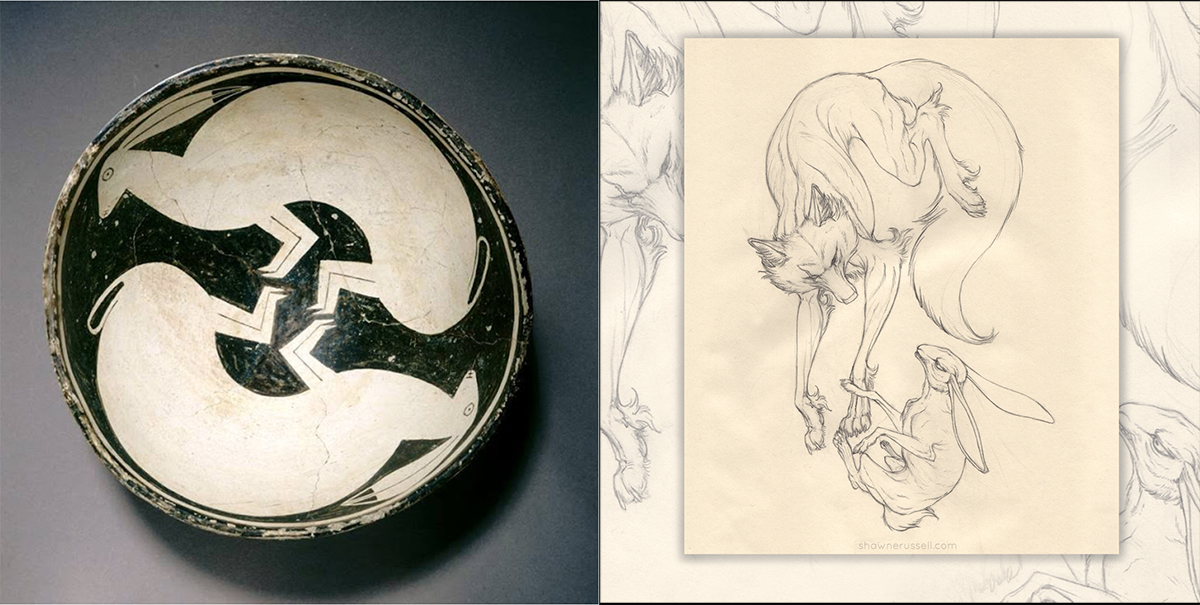 From the Greeks to Ostara, an ancient Germanic goddess associated with springtime and rebirth, hares and rabbits have constant ties to fertility. 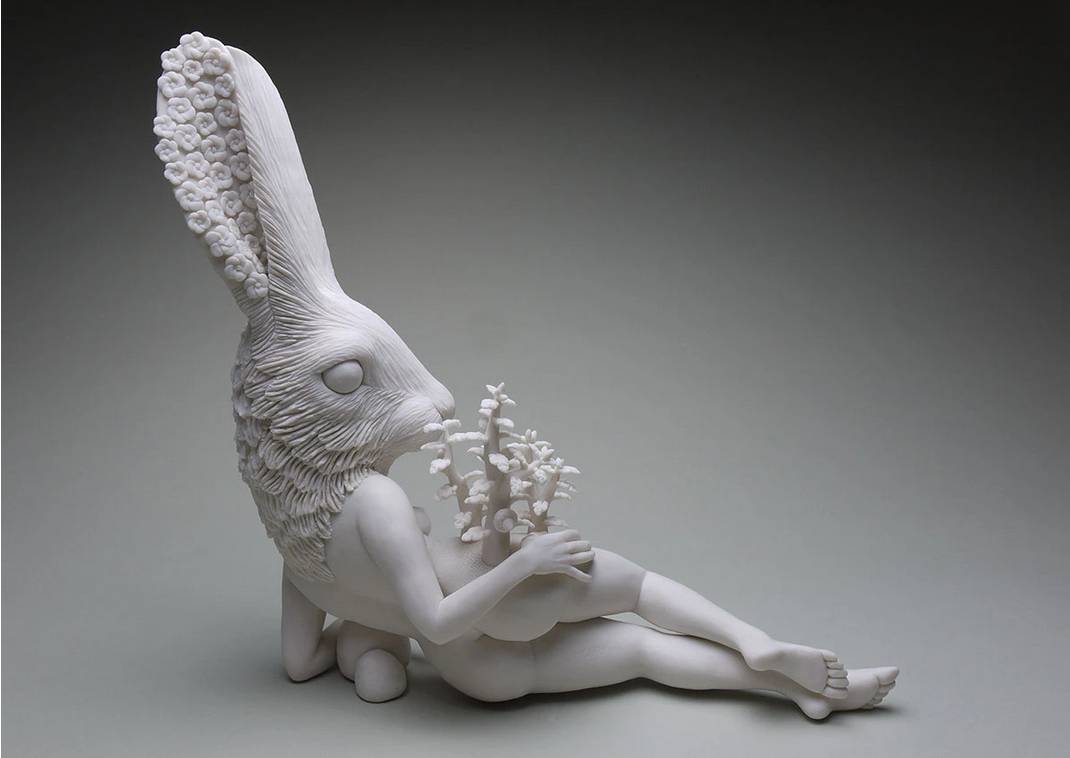 I Bought the Rabbit on That One

That’s one very angry cottontail: Anyone who’s been around rabbits long enough has likely experienced those cute little fluff-balls morphing into raging gorgons in a moment and probably sports a scar or two from the well-timed and effective finger chomp. Perhaps it’s partly due to this dual nature that there’s a long and delightful history of Mad Bunny Art.

Illustrated manuscripts offer a twisted bounty of menacing, mad hares. Maybe they were all lapins (specifically, a castrated male rabbit) and just a wee bit upset about it? 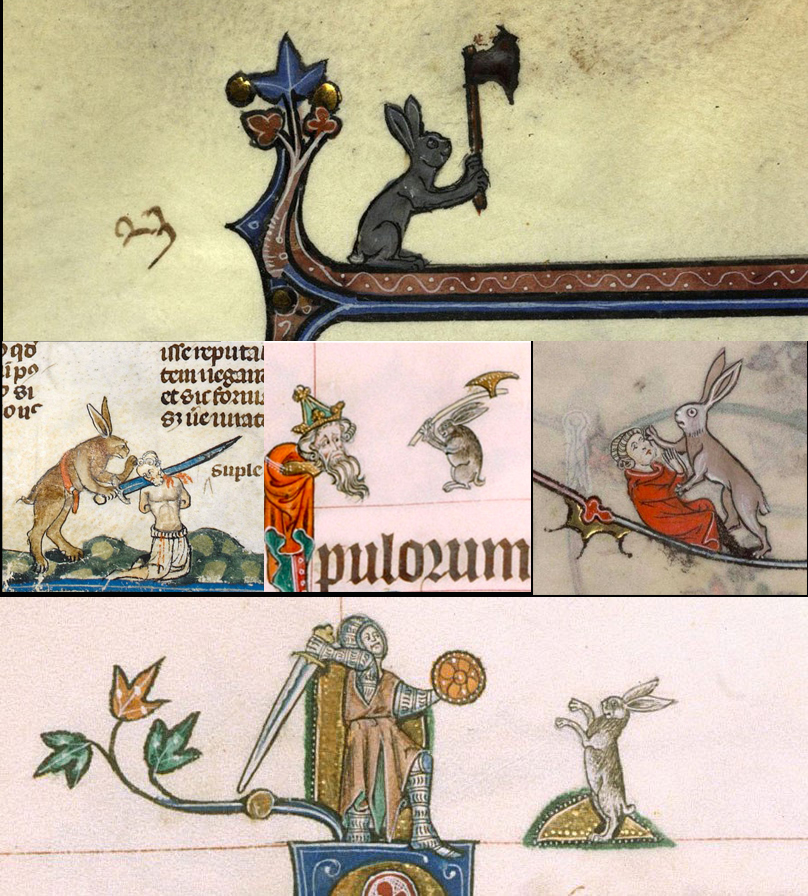 As was much of the Medieval mind, these battle axe wielding fur-balls are the stuff of nightmares (or comedy – perhaps these were the inspiration for Monty Python’s Rabbit of Caerbannog?) 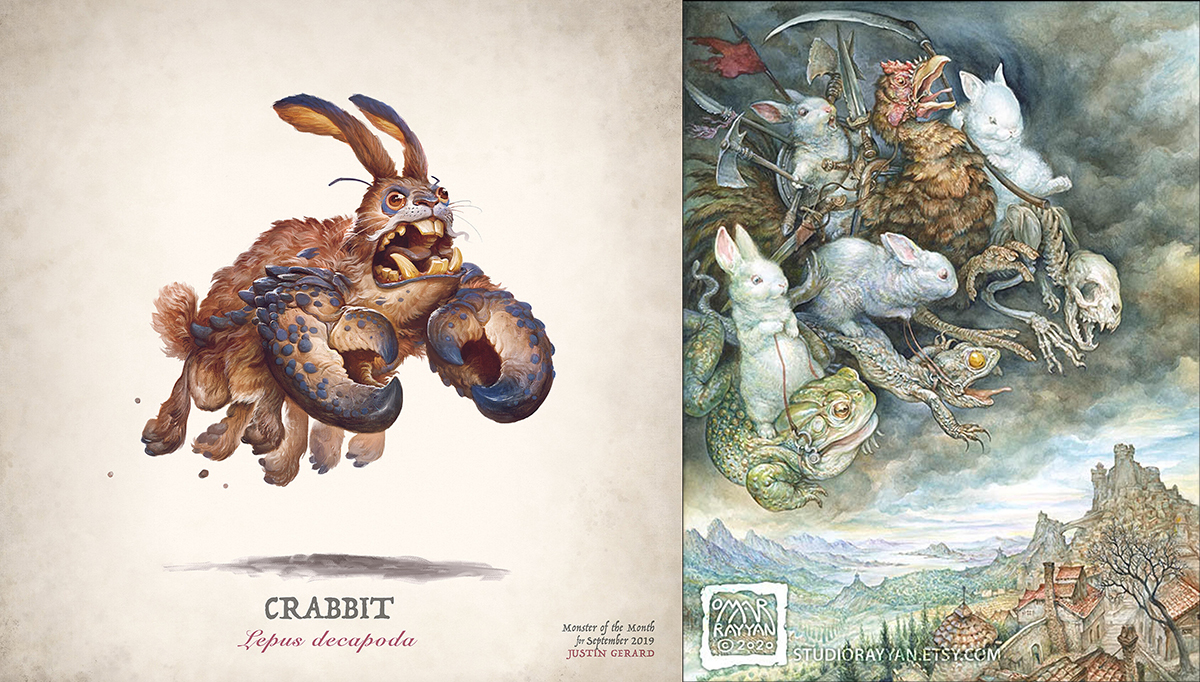 1. Justin Gerard’s “Crabbit” looks a little like my sweet little “Bun” on a bad day. 2. In Omar Rayyans “Four White Rabbits of the Apocalypse” I could imagine these bad boys raining down some terror. ( https://www.gallerygerard.com , https://www.studiorayyan.com/ ) 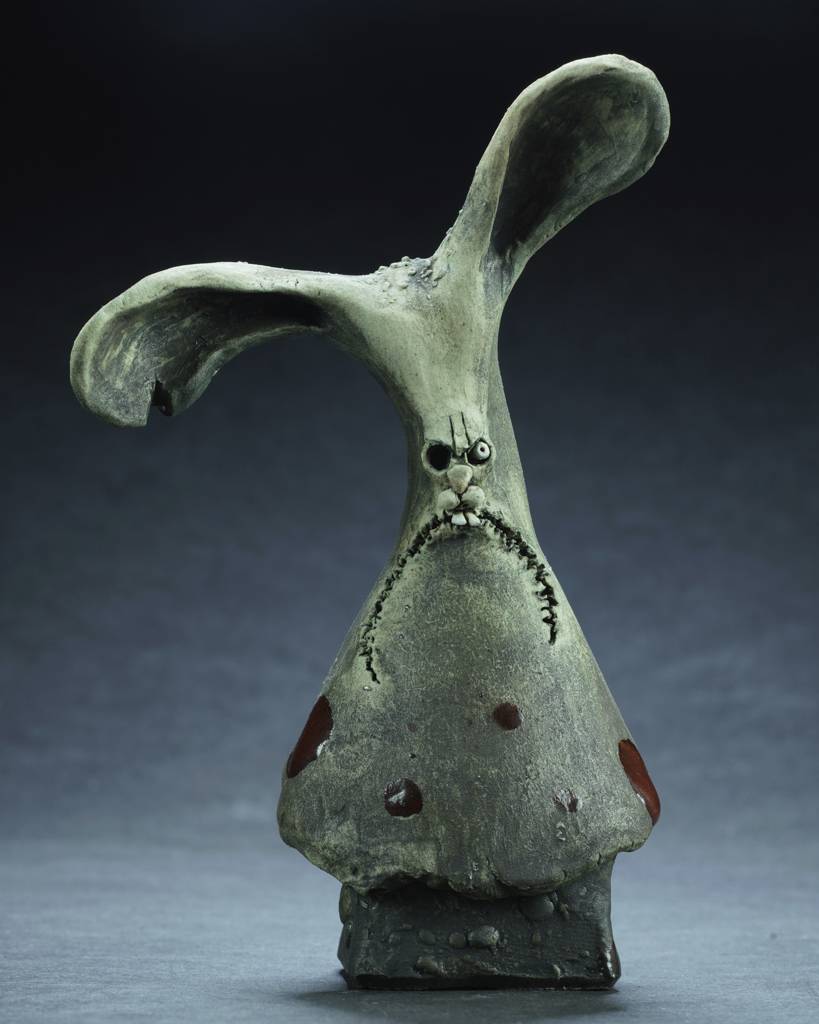 One of my favorites in our personal art collection, Dug Stanat’s “Hippity Hoppity” looks like a bunny who’s been through a bit of horse and rabbit stew (or is badly in need of his morning java). ( http://www.dugosaurus.com/ ) 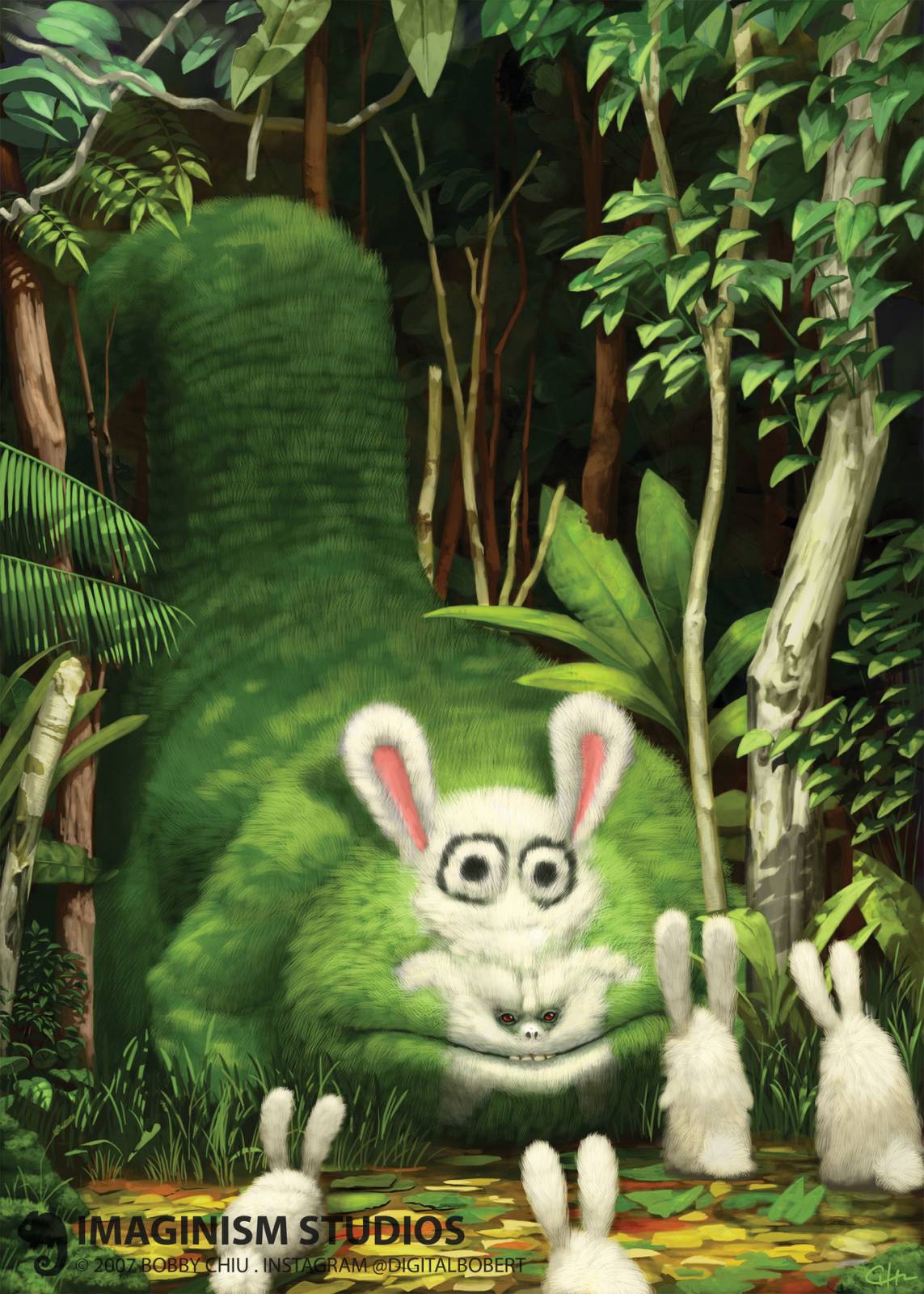 Funny Bunnies: And, of course, sometimes the baddies and beasties are getting the better of the bunnies, as seen in Bobby Chiu’s “Big Bad Bunny Eater.” ( https://www.imaginismstudios.com/bobby-chiu )

Working the Rabbit’s Foot On Me

Oh you rascally rabbit! From tricksters to thieves, lagomorphs have starring roles in the mythologies of indigenous people around the world, using their innate cunning to outwit bigger and stronger opponents. Among many tales of derring-do, Native American Ashinaabe mythologies feature a story of Nanabozho in his rabbit form stealing fire for humanity. In the American Southwest, Kokopelli, frequently depicted as a flute-playing, humpbacked rabbit had his many capers immortalized in rock art. The spirit of these early tricksters lives on in the tales of more contemporary rogues, Brer Rabbit and Bugs Bunny. 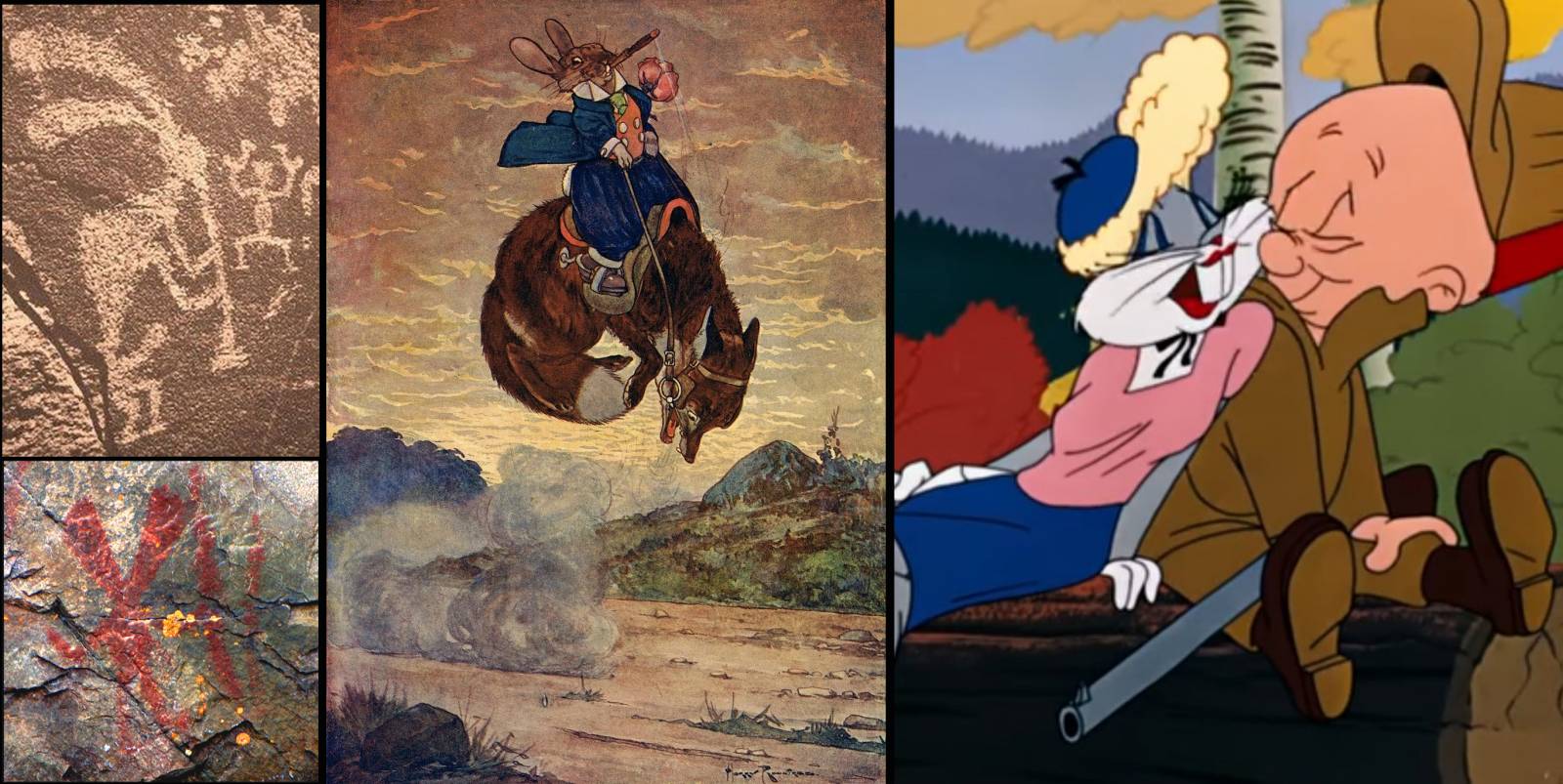 Bunnies are omnipresent in western art, including religious, mythological and secular representations. 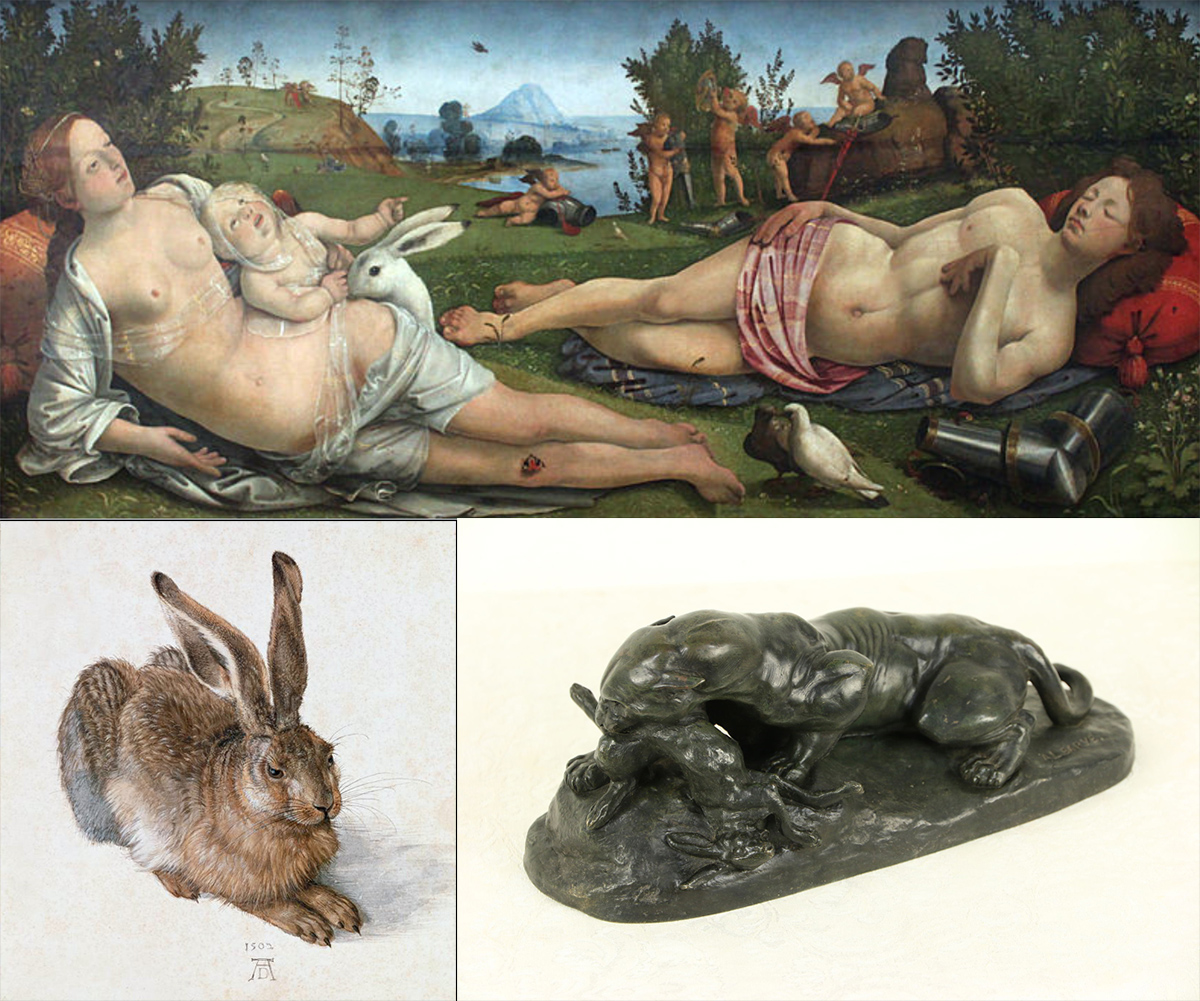 The dead bunnies we find in many historical (often Flemish and Dutch) still life paintings may seem an odd choice of subject matter for something to hang in your house. There are various theories on the attraction to this peculiar motif.

One is that these paintings were a status symbol, as for the most part, only the wealthy were allowed to hunt according to Dutch law at the time. Another is that they were part of the category of Vanitas works: paintings with symbolism around a moral message, reminding viewers of the fragility of life and the brief and transitory nature of our existence. A third thought is that this genre allowed the artist to showcase their artistry in rendering plumage and fur.

Daria Aksenova’s “Mono No Aware” is a contemporary take on this theme. Her description of the piece reflects a connection to historical artworks in this genre. “The title of this piece translates “the pathos of things” and is used to describe a sentiment of impermanence and the transience of things, and a wistfulness of their passing. The rabbit is caught by the red string, unable to escape its fate, while the flowers are a poetic reference to the last wildflowers seen in the depths of autumn.” 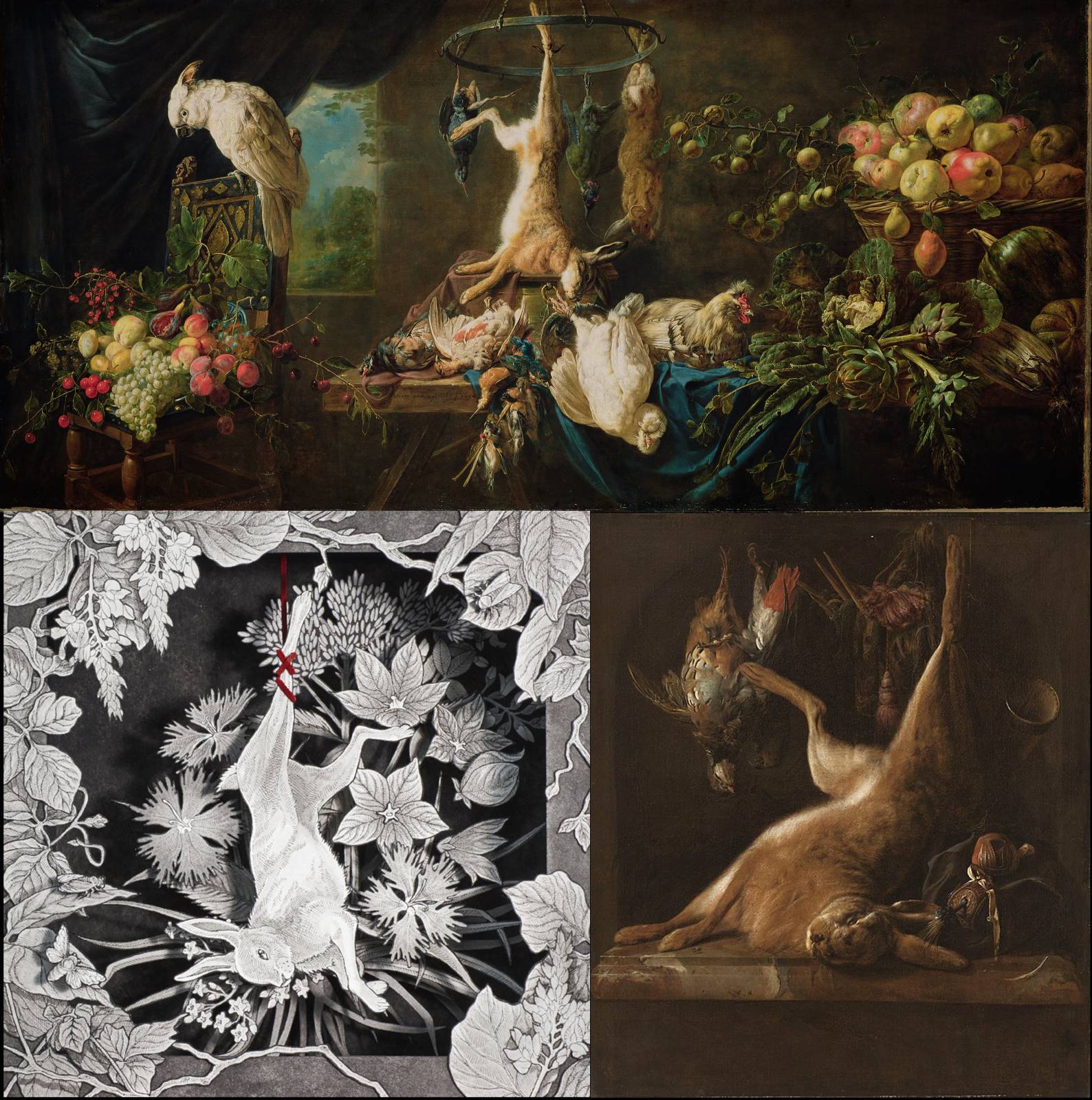 Who hasn’t adored the rabbits we all grew up with? Beatrix Potter’s Peter Rabbit, Fiver and Bigwig from Watership Down, Alice’s white rabbit and Aesop’s clever hares all share a home in our collective consciousness. We learned from them, laughed with them, cried at their misfortunes and, of course as artists, imagined for ourselves what they all looked like.

Our intimate connection with these little creatures encourages powerful imagery featuring the hare as herald. 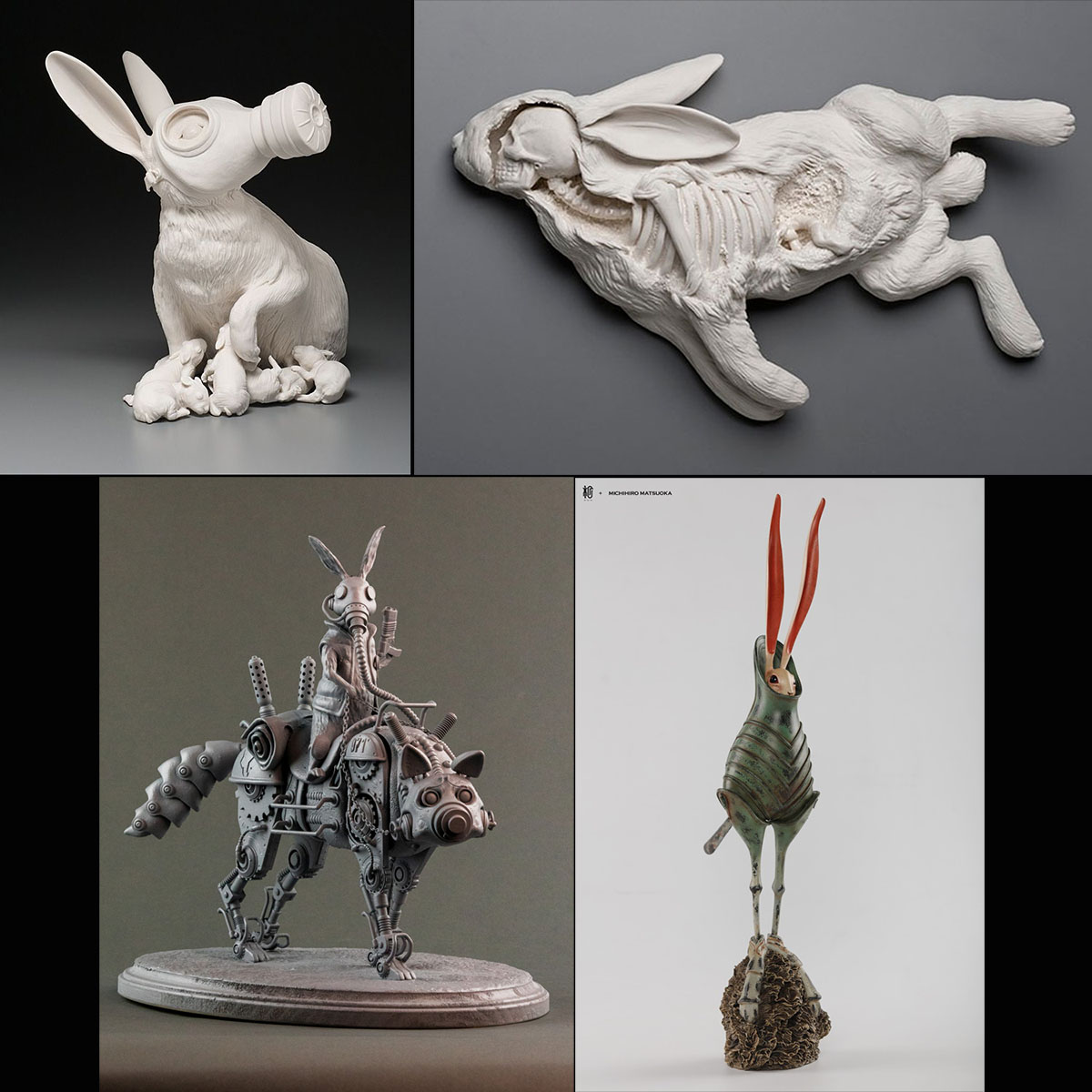 CCW from upper right: 1. Kate MacDowell’s reflections on our impact on the world around us, 2. Shaun Gentry’s “Peter Goes to War” and 3. Michihiro Matsuoka’s “Cocoon Minority” all use rabbit imagery to give us pause ( http://www.katemacdowell.com/, @shaungen, @michihiro_matsuoka ) 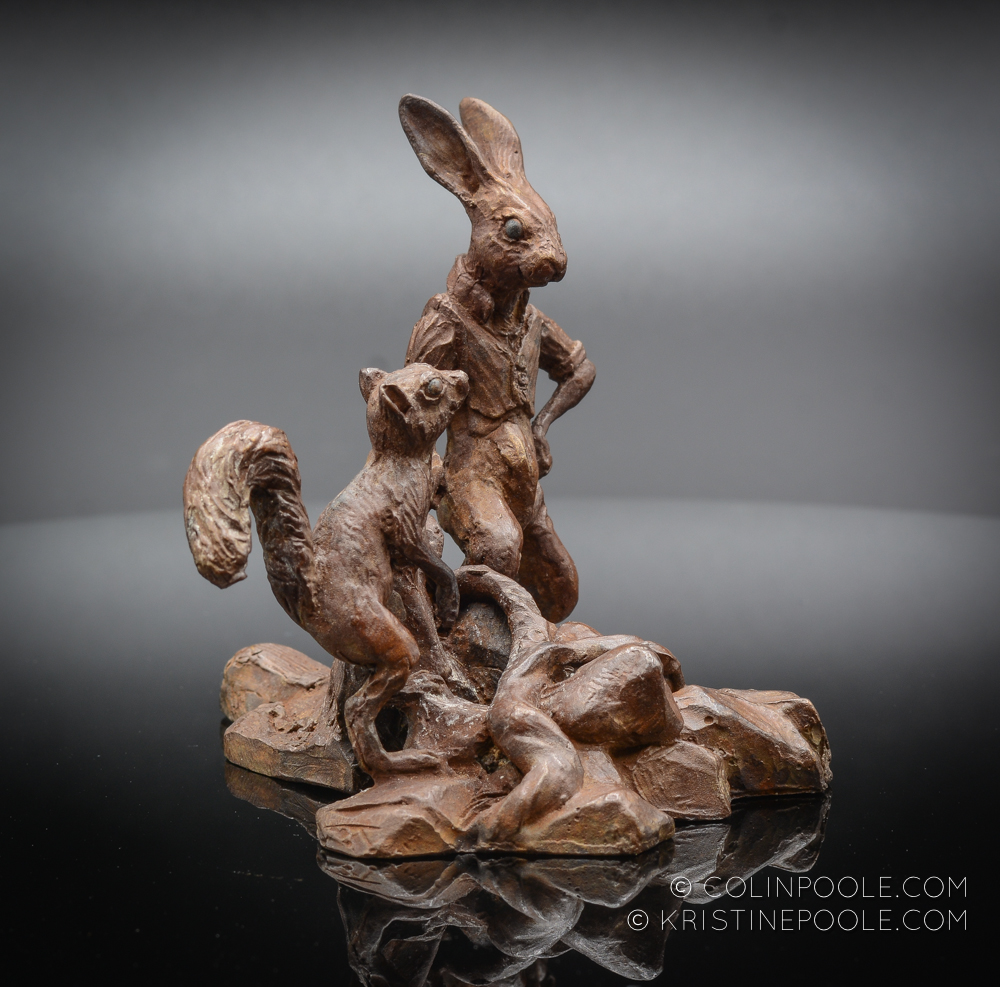 While this is an awful lot of bunny art, I have barely scratched the surface of all that is out there. In my research, I found certain trends and similarities which I’ve shared here. I’ve come across art that made me laugh out loud, tear up, dream of bigger things and ponder for days.

Speaking of working with popular subject matters, I like to think that we are all inspired by each other throughout the vast open plains of art. I also like to think that there is a thriving, surging, rushing undercurrent of creativity – a river that flows by and through each of us, that connects us all. We can dive in and swim along whenever, wherever and for however long we like. There will be crossovers and references to things we see, love and experience along the way. We each bring our own touch to our collective story. The archetypes and mysteries of human existence (even warm fuzzy bunny rabbits) speak deeply to us all – we draw them in and then exhale our own vision. This is to in-spire and then ex-pire, breathe in and breathe out. When visiting themes that have been done so many times throughout history, the key is to bring something new to the collection – to further the creative experience of everyone. For me, I’ve done my boat, now, being so inspired by all this work, it may well be time to add my own bunny to the art stream.

Til next time, Keep Creating! 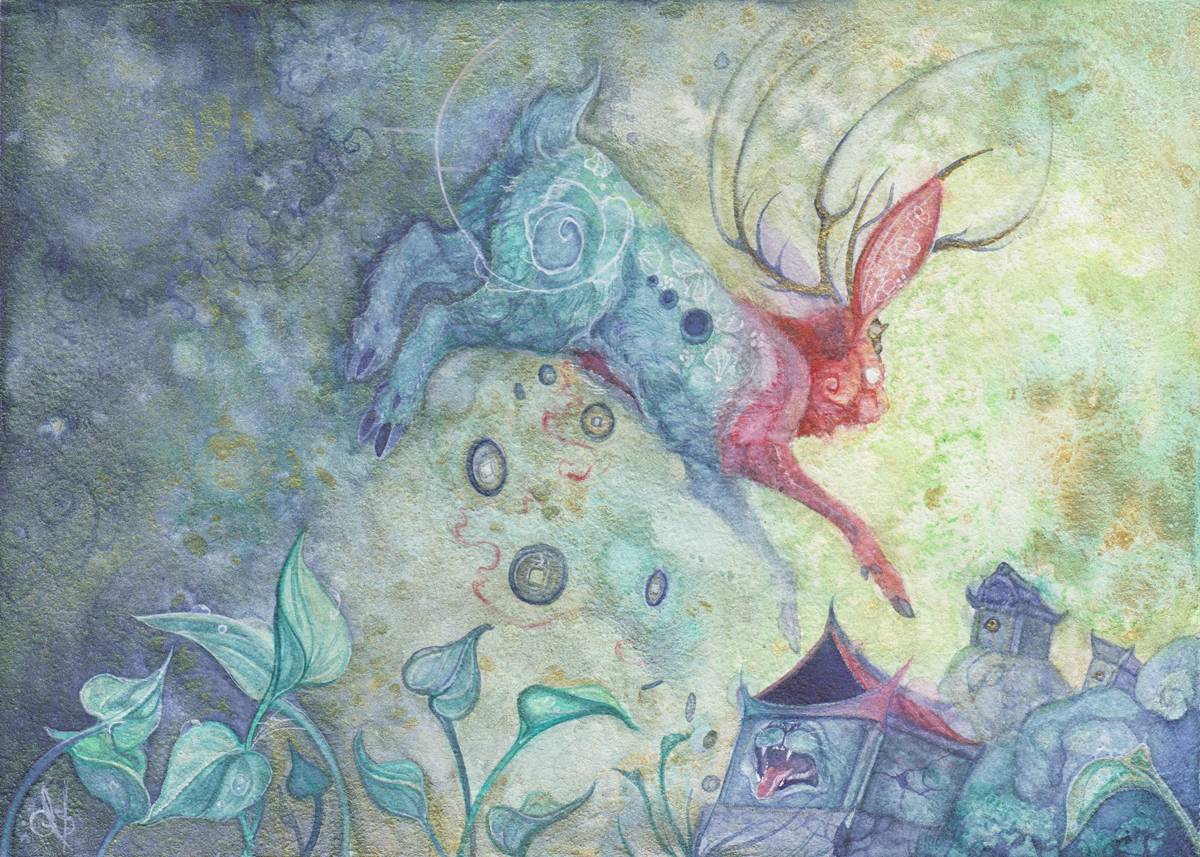 Okay – I can’t resist. Just one more… bunnies breed after all.
This one is so ridiculously cute and he has a story all his own (as seen on travislouieart.com): 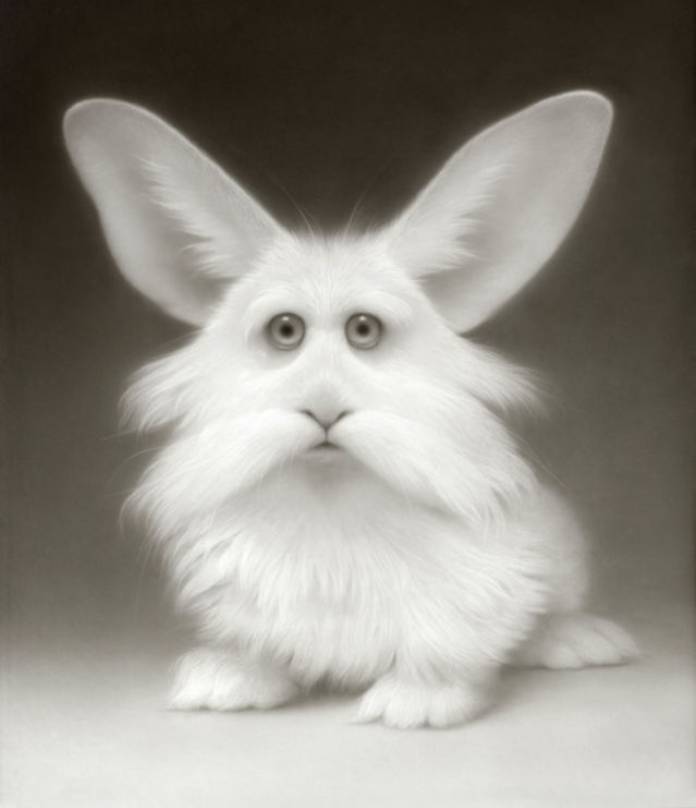 Dust bunnies were thought to be made up names for clumps of lint or hair found around our undusted interiors. They were an ancient Celtic spirit related to the Phooka that liked to always be just outside of the peripheral vision of the people they visited. There was a rule that they went by wherein if ever a person were to see one in its entirety in plain sight, the dust bunny must gift them a bucket of coin and a bucket of “magic milk”(usually a Stout), and then it would go off to the fabled “land of fluff” never to be seen by “Earthly eyes” again.

The last reported “dust bunny” was seen by Sam Turley in 1998 when his favorite baseball team, the San Diego Padres lost Game 4 of the World Series to the New York Yankees and he dropped his bowl of chips. He went down to pick up the mess and saw what has been called “The Last Dust Bunny”. His name was Muckonhewerbocktonbridgah, but went by the name Percy. He was over 2300 years old and was seen just under the couch trying to grab a fallen chip. Sam and Percy stared at each other for a long moment and then Percy disappeared in a cloud of lint. What was left behind was a 5-gallon bucket of gold coins, a 5-gallon bucket of the finest Stout Sam ever tasted, and the longest sustained smile Sam Turley ever had.

You see? This is what bunnies bring out in us! Happy Easter to all! 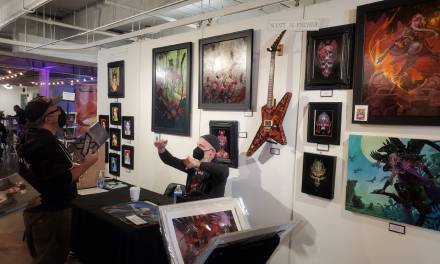 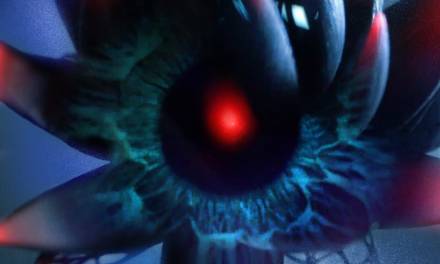