I have been wanting to paint a painting just for me, for a very long time. Last year I did a small painting for the MicroVision Expo, and that little image sparked a lust in me to do some more of that kind. As my professional life is, I constantly fill my schedule with charging monsters and epic battle scenes. But if I really ask myself what I would do if I had totally free hands, is a question I rarely have had the time, opportunity or even reason to ask…until now. I secretly have envied Justin his images that he do out of pure joy and when I lastly saw his troll and Boar painting I showed the drawing I was doing away and started on a personal painting that has been rummaging in my mind for a while.

Here goes: I want to share it with you during the progress. I will confess; I am not even sure it will ever be finished, but I hope it will. The idea is this: An old warrior protecting a young female. He is their escort through the wilderness. As the “camera” opens up, we are looking at them descending down a slope. Cliff-walls on both sides prevent them from going anywhere but down. Behind the cliffs and rocks, a group of troll/orcs are hiding ready to ambush the not- knowing hero. 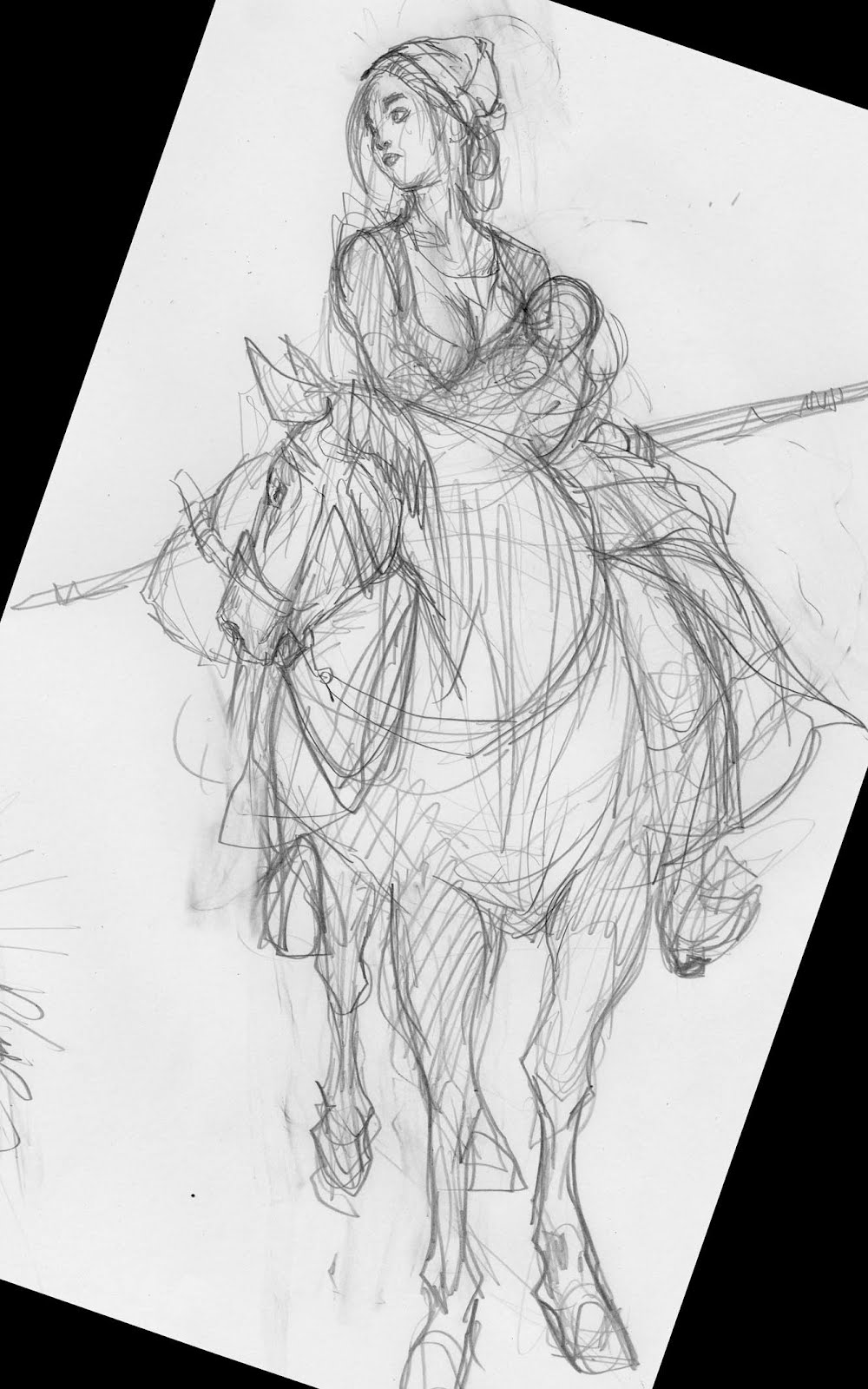 Top thumb, was one of the first versions where the trap was out in the open. The hero was midway in drawing his sword, sensing danger ahead. The story was not as tense as I had imagined it. They could escape by riding back. The heroes chance of survival was greatly improved since he already knew something was up. The second one was exactly what I wanted: I always try to capture the scene, the moment before everything runs amok. The moment where the spectator does not know how the story is going to end. You have to imagine one outcome or the other, and I will of cause give clues in either direction. If the hero was on guard, we, by instinct, feel he can overcome anything. So it became important to me that he was unaware. If his horse sensed something, it would be the same. Instead I made it so that the female and her horse, was more aware. Perhaps they heard something making them turn the head, but they are in the back and might not be able to warn him in time. The idea of adding a baby to the female was to make the whole outcome more precious and horrible. I toyed with the idea of having the woman breast-feeding the babe, but thought against it. It would be very difficult breast feeding on a horse and a bit corny too. It would look like an excuse to show some breasts. And hey, bare breasts would draw the attention away from the theme. Ordinary I wouldn’t shy away from a chance for some nudity, but today I made an adult choice. 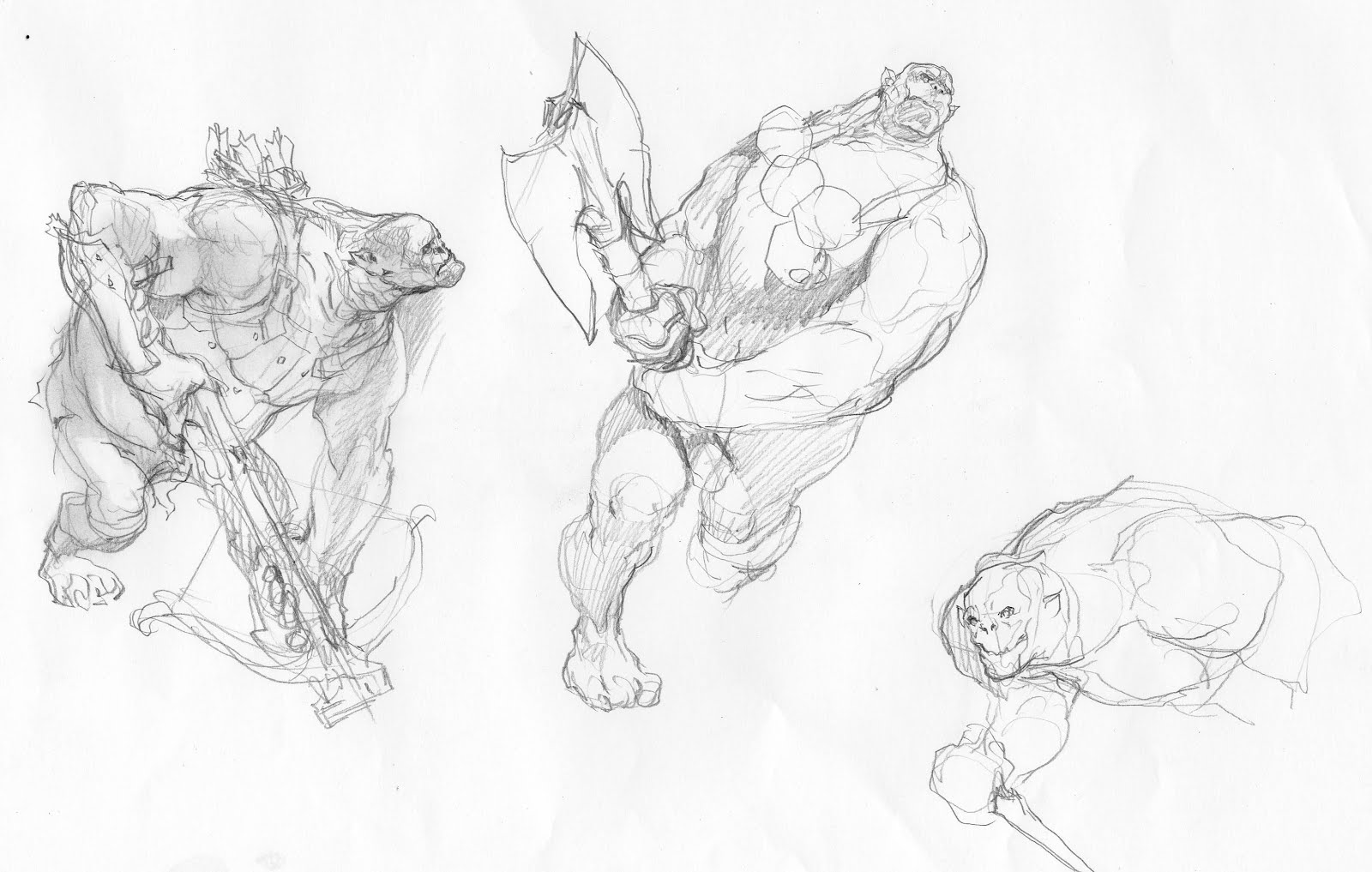 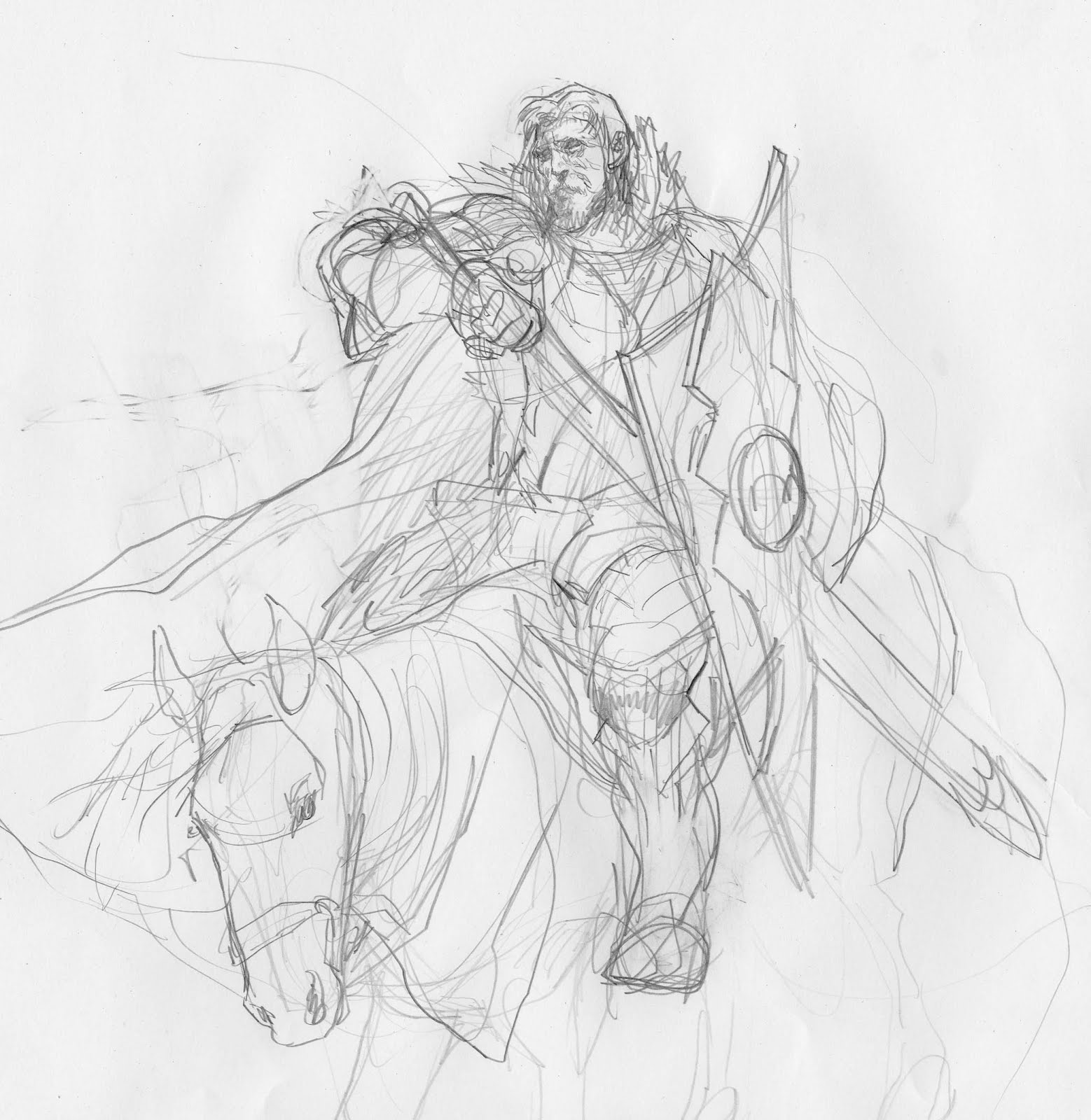 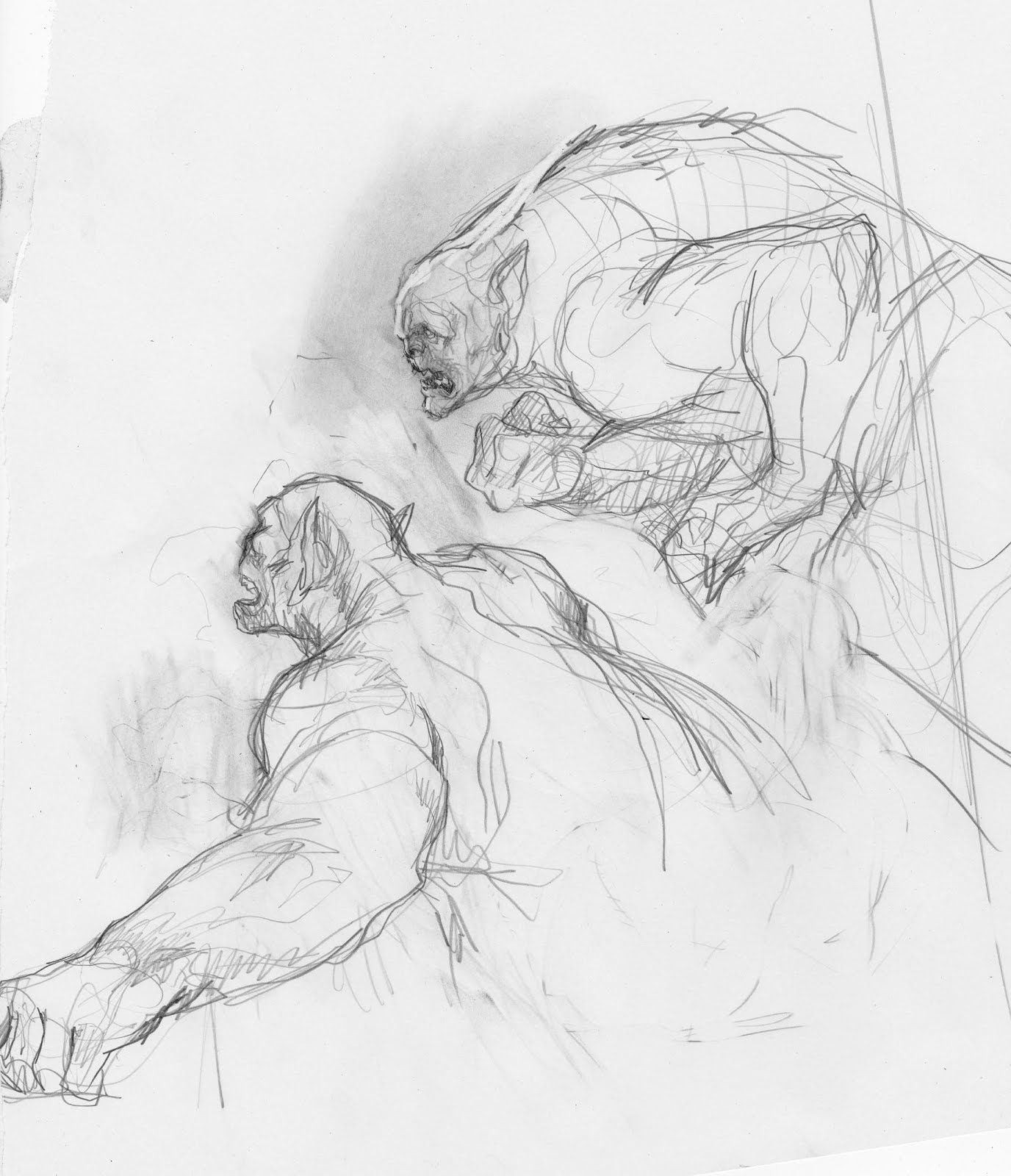 So, as always, I sketched each figure separately on a very large piece of paper. I cut out a very large piece of Watercolor paper ( About a meter by 60 cm ) This is going to be my biggest painting yet. I made a lot of different sketches. I might scan some later to show you all the wrong turns I made down that road. The hardest part by far, was doing a horse riding down. Seen a bit from above. I used some toy animals, but they didn’t help at all. What I ended up with was a sketch with the heroes horse seen too much from a standing viewpoint. So I made a new horse, but am still going to keep the rider. The trolls, was so fun and came out quite effortless. Bulky anatomy just seems so much easier than horses. 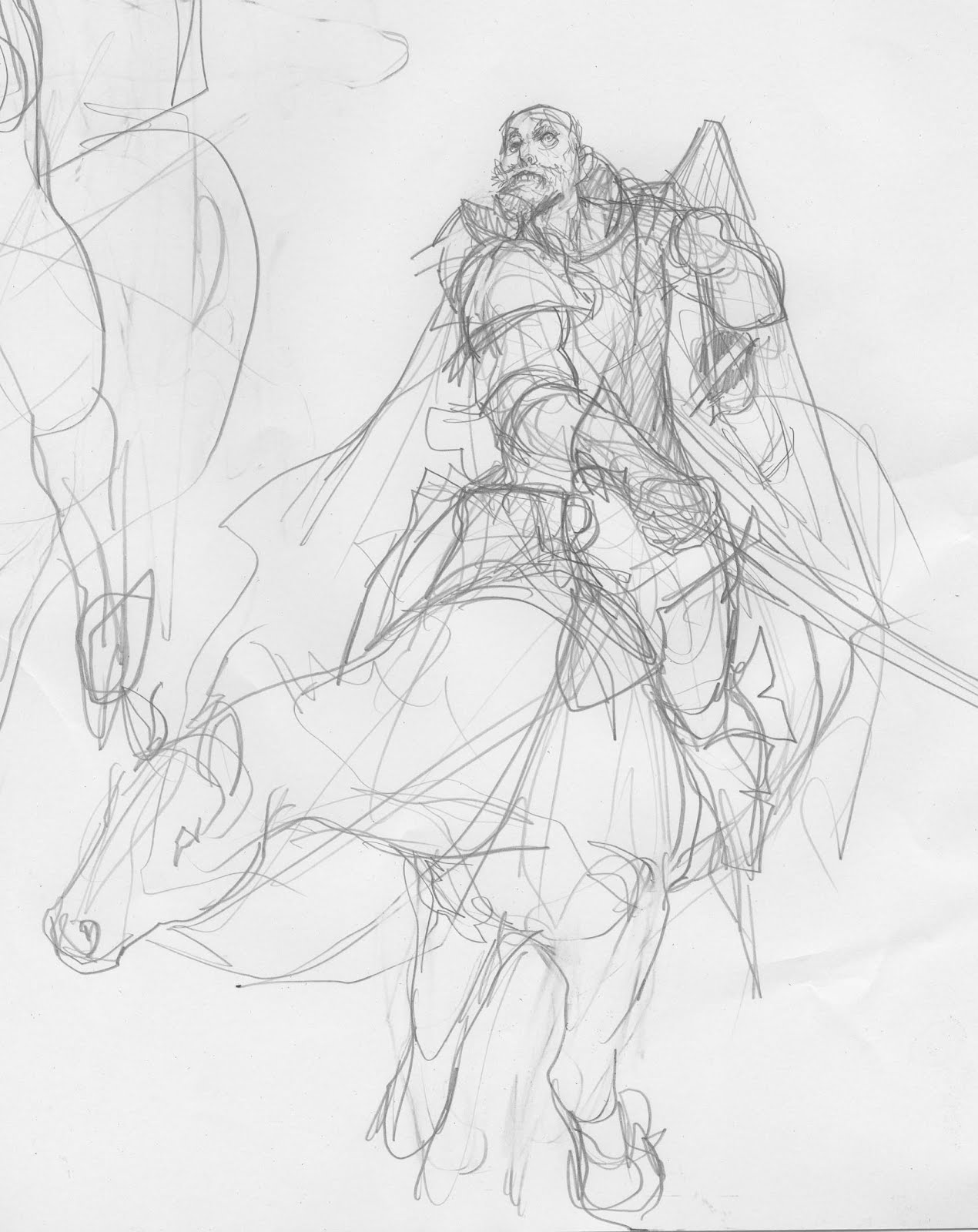 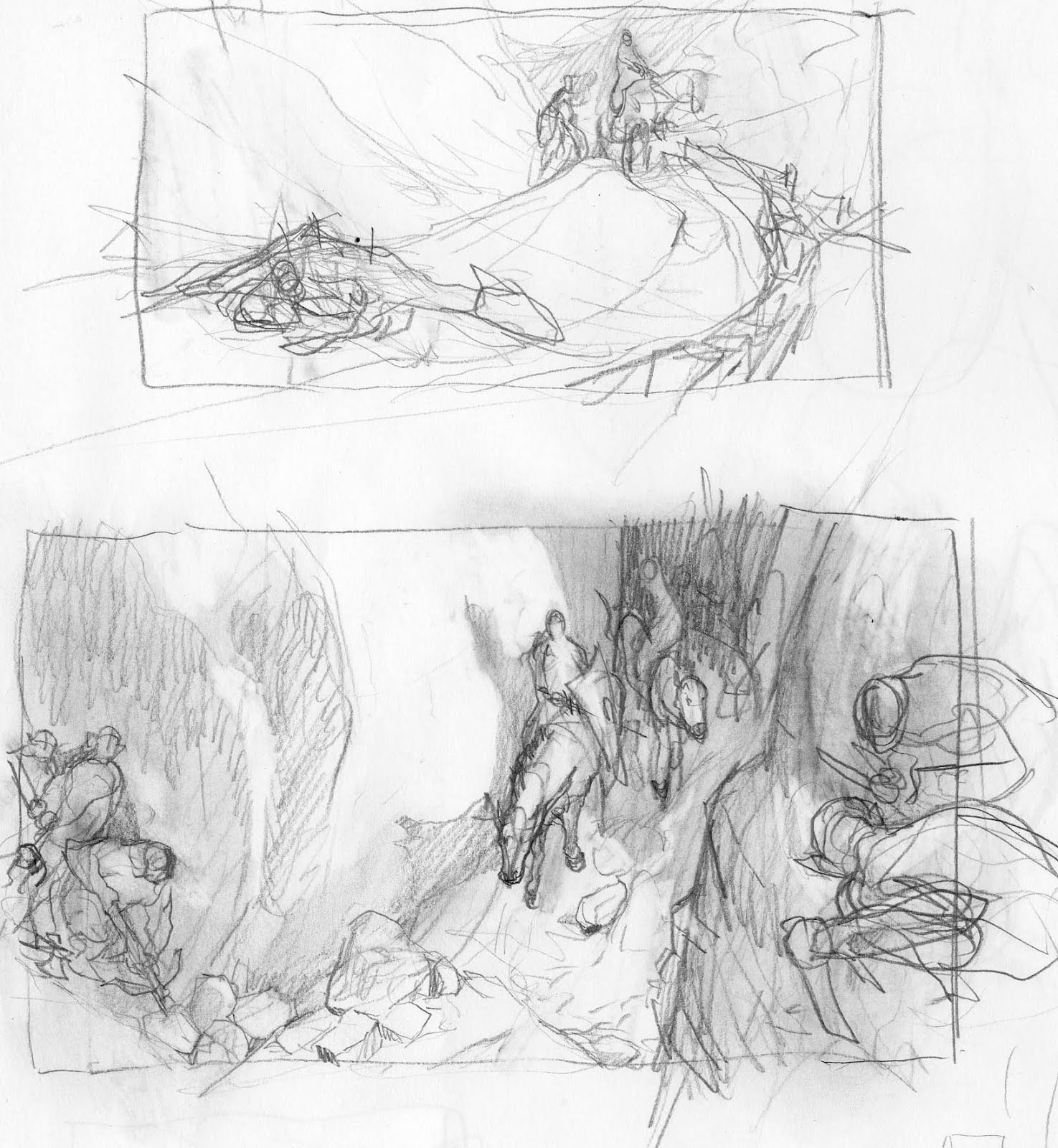 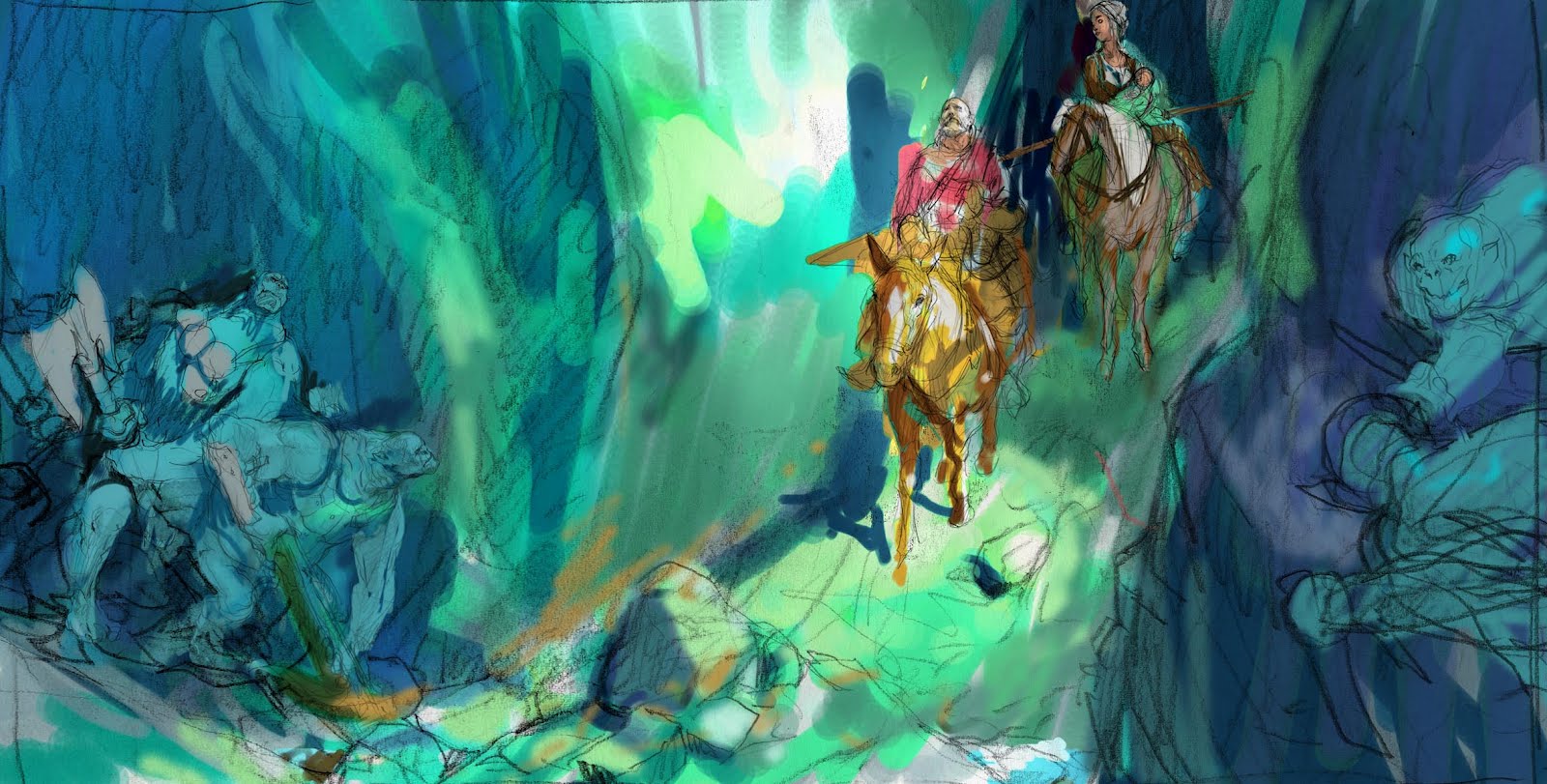 I tried to put the sketches into the thumb in Photoshop and while I was in there anyway I sloshed some digital colours at it, to see if I could capture the light I had in my head. I did not succeed. There is something better about the thumb, and I need to get the horse of the hero perfect. The colors I think needs to be lighter and less contrasted to make room for the figures. I still want to keep the idea of the hero riding out into the sun light and the female still in shadow ( hiding, safe ). At this stage I would happily hear from any of you out there who have thoughts or suggestions as to how I could improve the clarity of this painting. You can do a paintover in photoshop or just write the words if you like. I will try to address the problems before my next update. 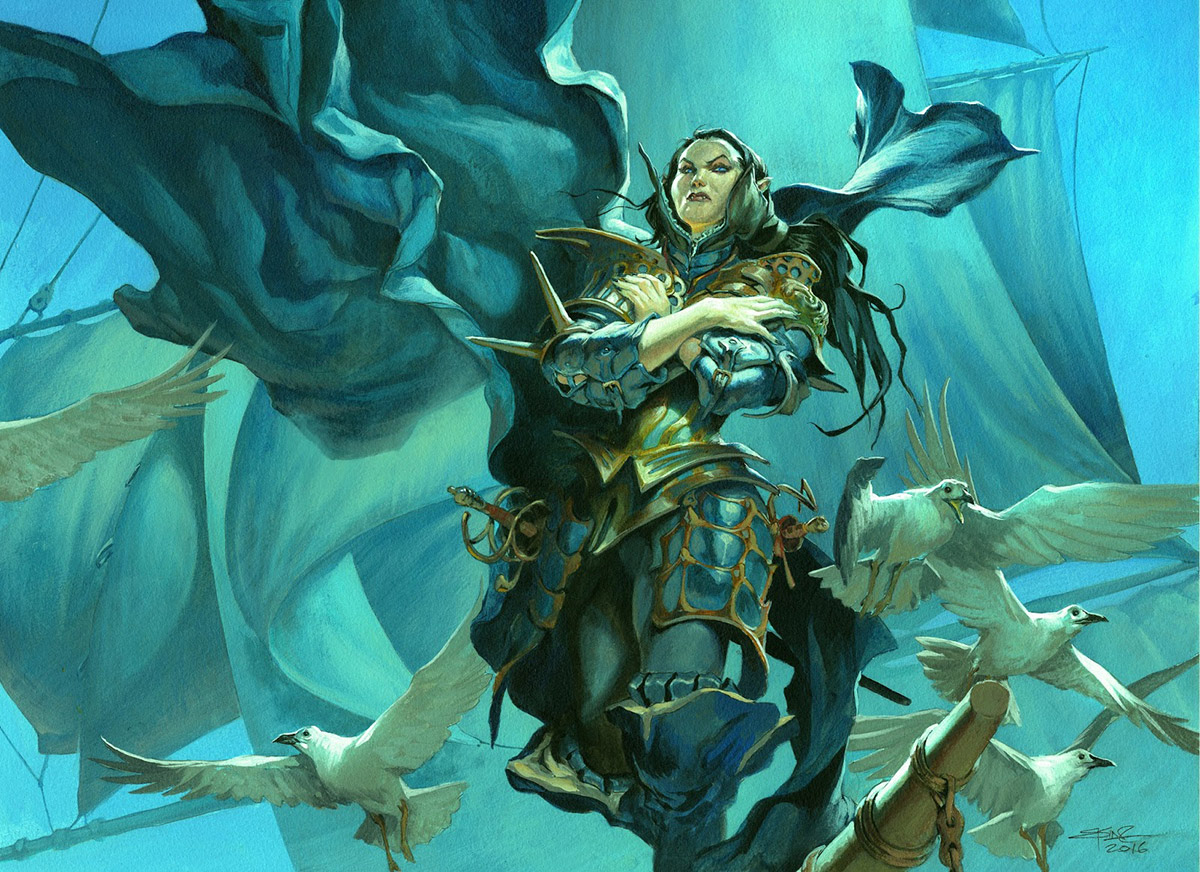 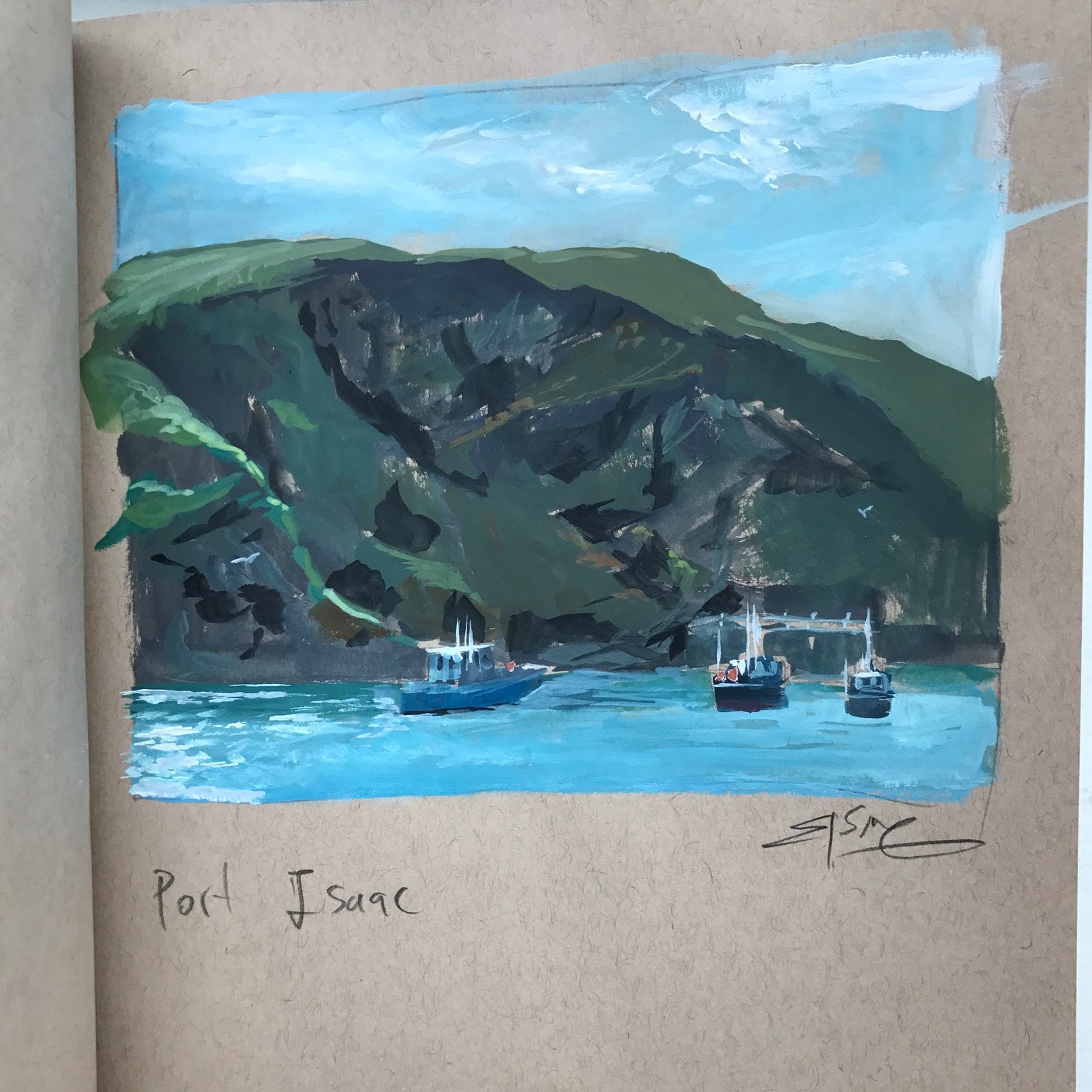 Painting on the Go 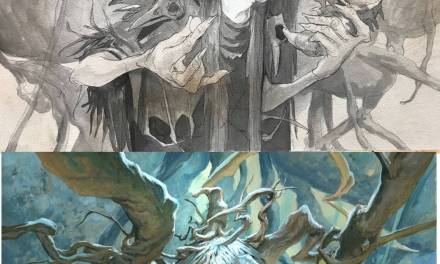