All of us have grown up with symbolic and iconic images, and perhaps one of the most recognizable for us, as far as Western culture goes, is that of Pegasus—the winged horse of Greek Mythology.

Indeed, it is a lovely image, embodying beauty, speed, and artistic inspiration—supposedly anyone who drank from the spring that issued forth when Pegasus stomped his hoof on Mt. Helicon would become a famous poet, and Reader’s Digest has appropriated this being for its logo accordingly. And of course, Pegasus has long been Mobil Motor Oil’s corporate image, embodying literal horsepower.

If we are doing creature design for sheer mythological productions, than there is nothing wrong with maintaining the traditional chimerical and symbolic image—that is to say, a stallion with eagle’s wings sprouting out of its withers, and a wingspan that fits neatly within an arbitrary graphic format or screen aspect ratio. Indeed, taken to an extreme, we can even have equine cupids, such as in My Little Pony.

However, what if we were to go beyond this, and do a more science fictional treatment? Ah, there’s the rub. We are now getting into the controversial subject of hexapodal large flying creatures, and this is a subject that can be debated into the wee hours.

There are basic challenges: how is the shoulder girdle affected? Should there be a single scapula, with separate ball and socket joints to accommodate both humerus of the forelimb, and the humerus of the arm of the wing? We are talking about a vertebrate animal, after all, with two forelimbs! Or, should there be an additional, more avian scapula above and behind the equine one, that is fused to the ribcage, as in birds, to prevent possible interference of articulation between the forelimb and the motion of the wing, not to mention the sheer stress forces caused by the immense muscles needed to power the beast?

In a bird, bat, or pterosaur, it is the pectoral muscles which power the wings, and so, this Pegasus would likewise need in reality very large ones, which would cause it to have much more of a pouter pigeon silhouette. Needless to say, this might give it a more unintentionally humorous appearance, which, in a serious production, might not fit the aesthetics required. So, a compromise would have to be arrived at.

In my drawing, I’ve given some possibilities of what a real Pegasus could look like (while being mindful of the production aesthetics mentioned above for a beautiful, and not funny-looking creature). An average horse weighs around 1,200 pounds. Let’s say that I give it hollow but strong bones, and the weight is reduced to 900 pounds. The skeleton of the thorax and lumbar regions is fused, stiff, and inflexible, with struts from the ribs, which further this effect, which is essential for flight. The enlarged, but not pigeon chested, pectorals are supported both by a keeled sternum, with some further connections to the thick fascia along the rectus abdominus muscles of the belly. The only flexible areas of anatomy would be the head, neck, wings, legs, and tail.

I’ve taken both scientific and anatomical license in giving it a wing scapula which lies flat and fused against the ribcage, connecting with the sternum itself, and have made up the argument that there are integumental tissues that separate this from the equine scapula, so that foreleg motion is not compromised. 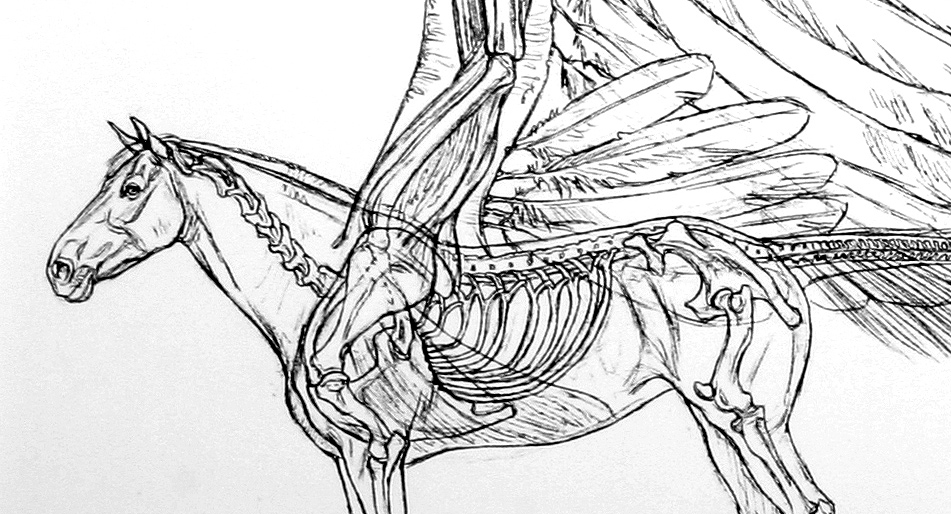 And, even the tail would need to be considered—to act as a counterbalance and rudder, it is lengthened and somewhat stiffened, and the normally flowing hair is also stiffer to create both lift and an airfoil effect, since, as I noted, this is quite a large animal to be flying, and which weighs considerably more than the largest Pterosaur, Quetzalcoatlus.

A lot of the weight is in sheer muscle mass, which is heavier than both bone and fat (horses fortunately are very lean animals), and then, the wingspan must be accounted for—the larger the animal, the greater the wingspan. Judging from the wingspans of very large gliding birds such as the goose-sized Laysan Albatross (wingspan of 80 inches—nearly 7 feet—body weight 9 pounds) and the Quetzalcoaltus itself (wingspan estimated at 36 feet with a body weight of no more than 550 pounds), our 900 pound equine’s wingspan could easily reach, mathematically, around 70 feet or more.

Now, we come to another problem—how does this animal get off the ground in the first place? There are several possibilities, all of which might be used in combination.

Since the wingspan is so very wide, it is impossible for the wings to flap fully without hitting the ground. So, I imagine the horse galloping at full speed with the wings’ flap limit at the horizontal axis from the body, until lift is reached, similar to that of how boobies and albatrosses do it. I also think that the wings themselves could act as arms in the final pushing off down stroke off the ground, in conjunction with the leaping action of the hind legs, as is the case with actual horses. Happily for us, horses are very powerful jumpers—some can clear over 7 feet in a beautiful arc, and startled zebras have been known to leap over 6 feet fences from a standing start.

And then, of course, our Pegasus could race over a cliff, and become airborne that way.

Looking over my drawing, I do have to chuckle. I have retained still some obvious chimerical features, as the basic wing complete with feathers is totally avian. Since Pegasus is a fundamentally mammalian creature, it would make more logical sense for it to have more bat-like wings, but, wait a moment. This is where it’s ok to compromise a bit for the sake of the sensibilities of the production, and to retain the beauty and magicalness of the mythological realm, rather than being such an sci-fi purist that we end up creating, in the end, while albeit more scientifically realistic, a nevertheless aesthetically monstrous being. Here then, is where fantasy and science fiction can shake hands. 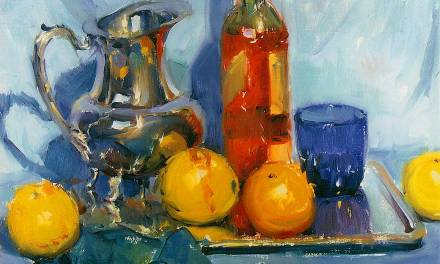 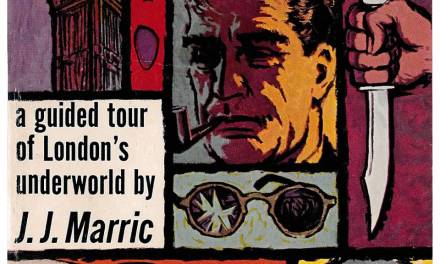 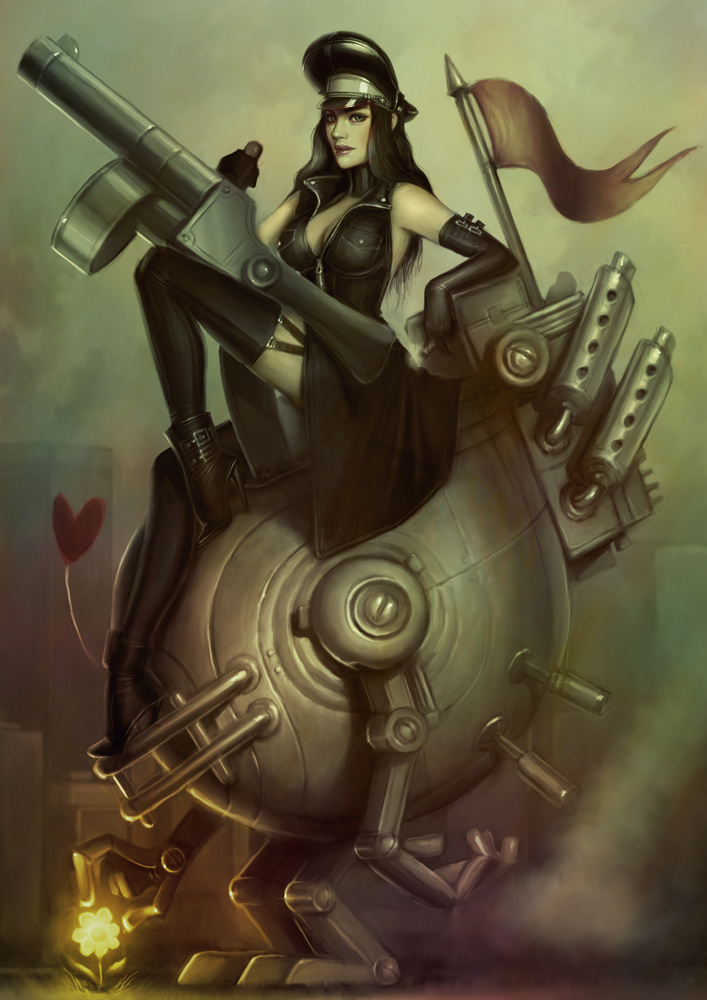 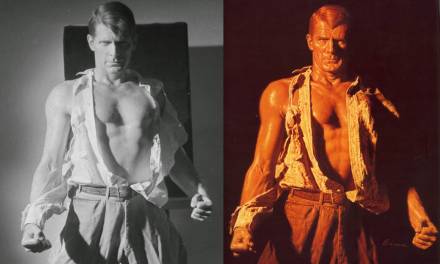