Some years ago I created a piece I called Water Nymph. She was a way from me to explore several areas I’d been interested in, both aesthetical and materially. As with everything I’ve done, some parts worked and some I wished worked better. But she was done and deadlines loomed. Recently, I discovered a set of castings I completely forgotten I’d produced. A full set! It was almost like I’d planned it. Its not often I get a second chance. But here it was.

She’s made of up three parts; the main body unit and arms. Her water dress is made up from seven clear cast pieces. Each water dress element was given several coats of gloss varnish to increase its transparency. 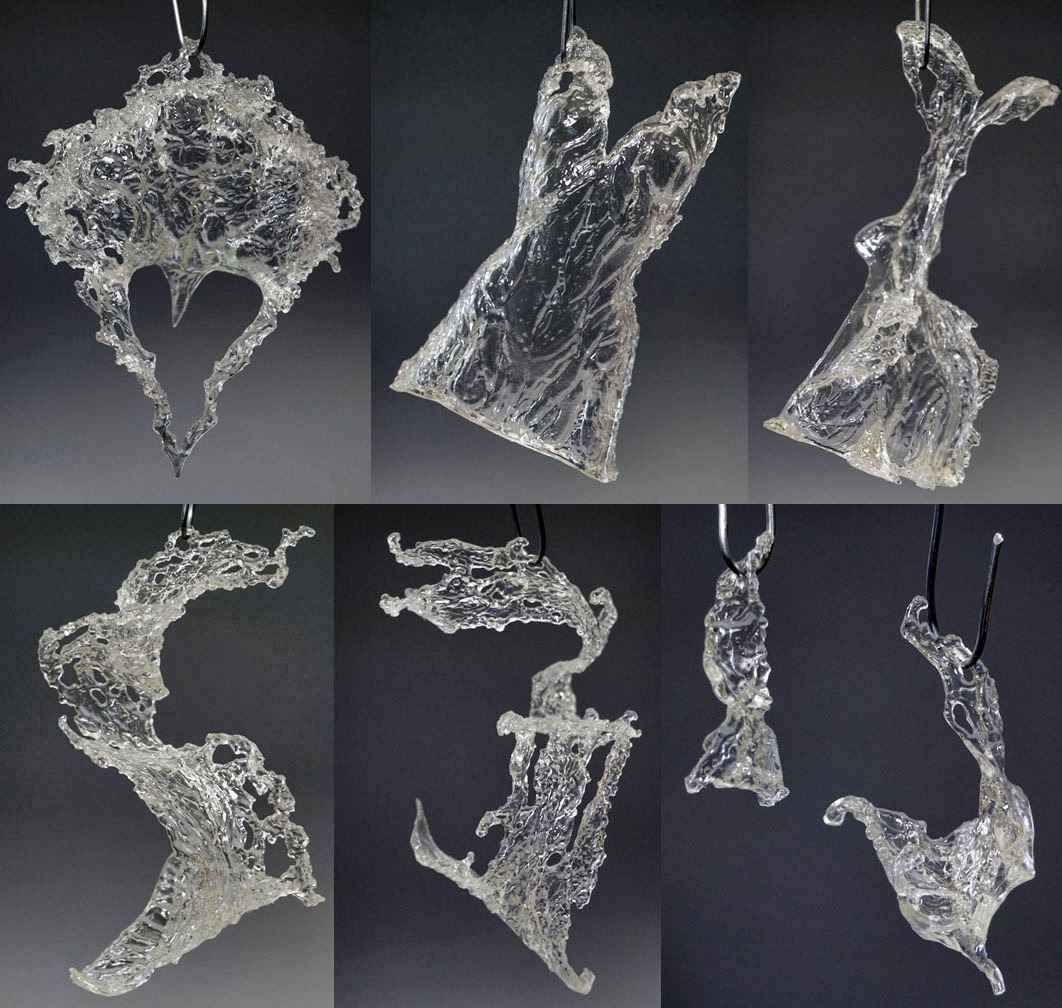 With this version I wanted to go for more of a beauty make-up as opposed to an alien paint application. I started off with a light peach/cream color and base coated her, using cel vinyl. I really wanted her eyes to be a focal point so spent a lot of time shading and contouring her eyes. To pupil or not to pupil, that was the question. No pupil. I gave her a coat of Lusterless Flat sealing varnish and then added high gloss to her lips, satin varnished her hair and painted in a couple of coats of iridescent green on her eyes over which I added a high gloss varnish. 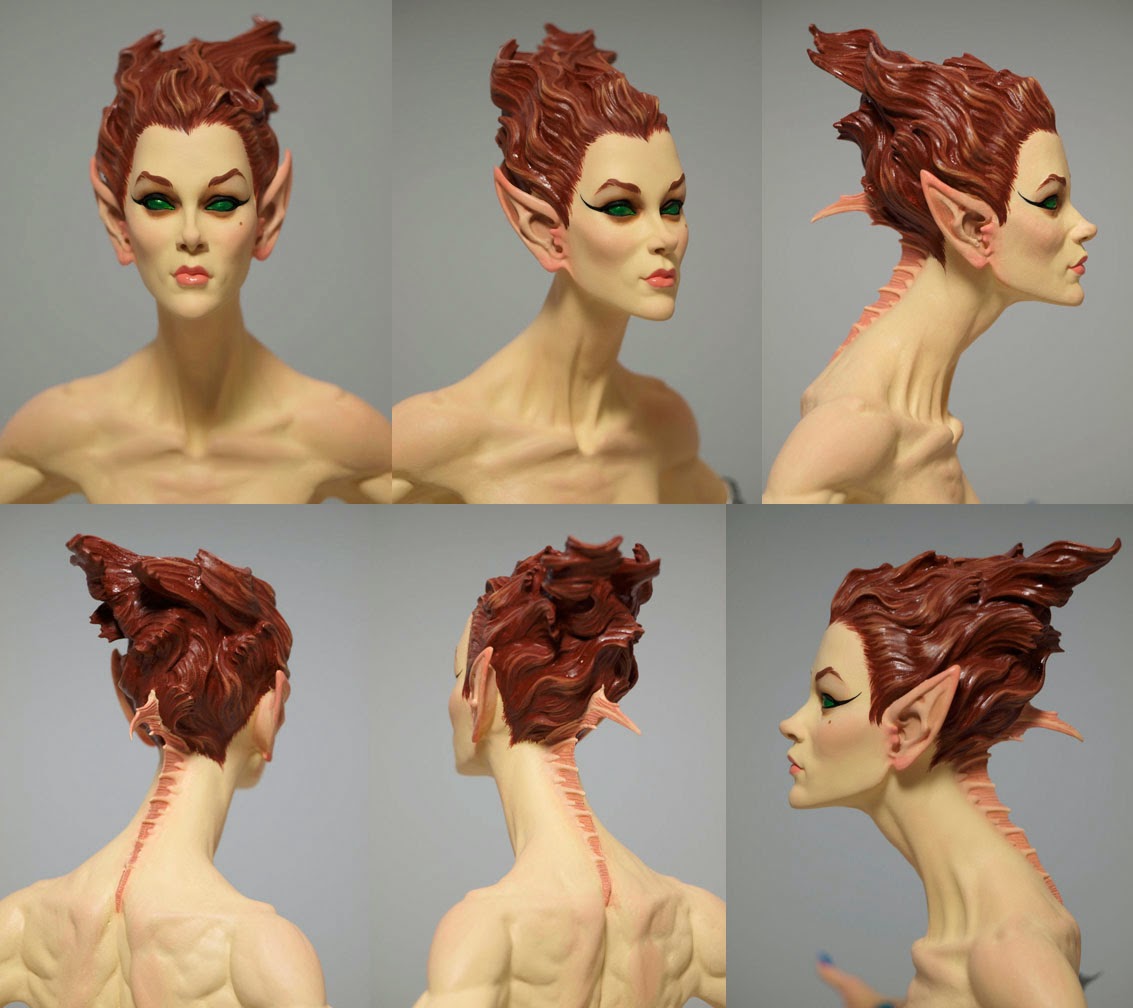 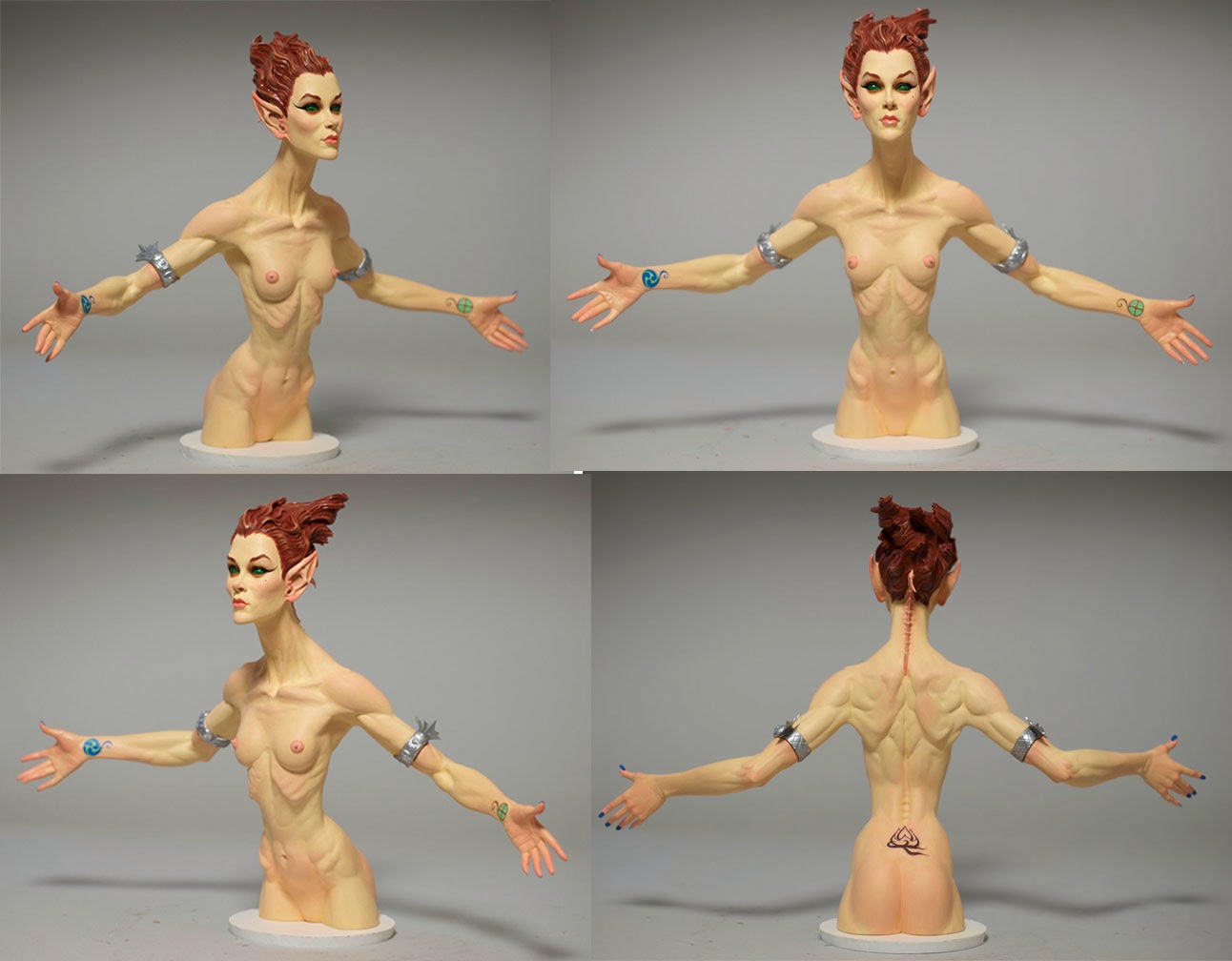 I painted blush onto her shoulders, elbows, biceps at the arm band, hips, collar bone, breasts and butt to bring some warmth to her skin. One of the things that bothered me about the first version of Water Nymph was a sense of visual clutter. I went for a simple silver/chrome treatment for her arms bands. And carried that to the nails on her little fingers. To break up the flatness of her arms/hands, I gave her hands a light coat of semi-gloss spray varnish.
She has three tattoos. The tattoos on her wrists are symbols of Water and Mother Earth. The tattoo at the base of her spine is a signature I designed years ago that contains the first initials of the four members of my family. 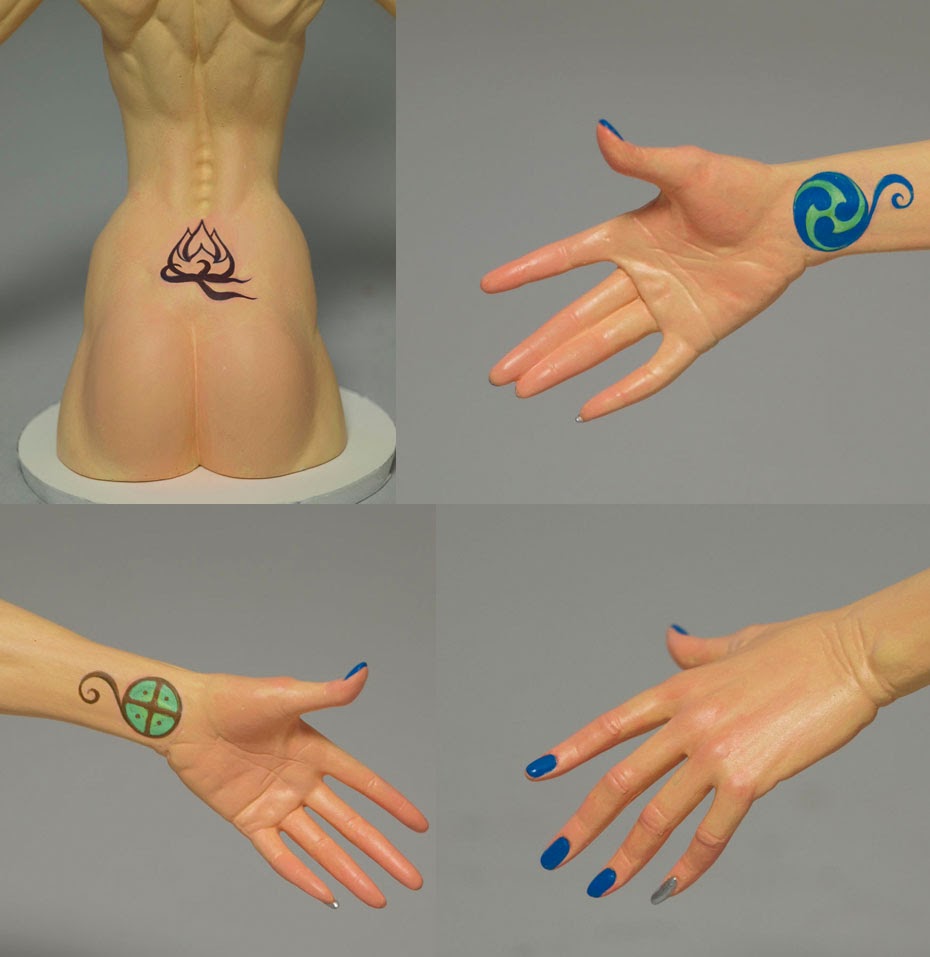 I wanted to give her some kind of a base. Something to give her a little lift without adding weight. I cast it in a translucent pale green resin and suspended a blue orb in its center then finished it with a frosted glass treatment. 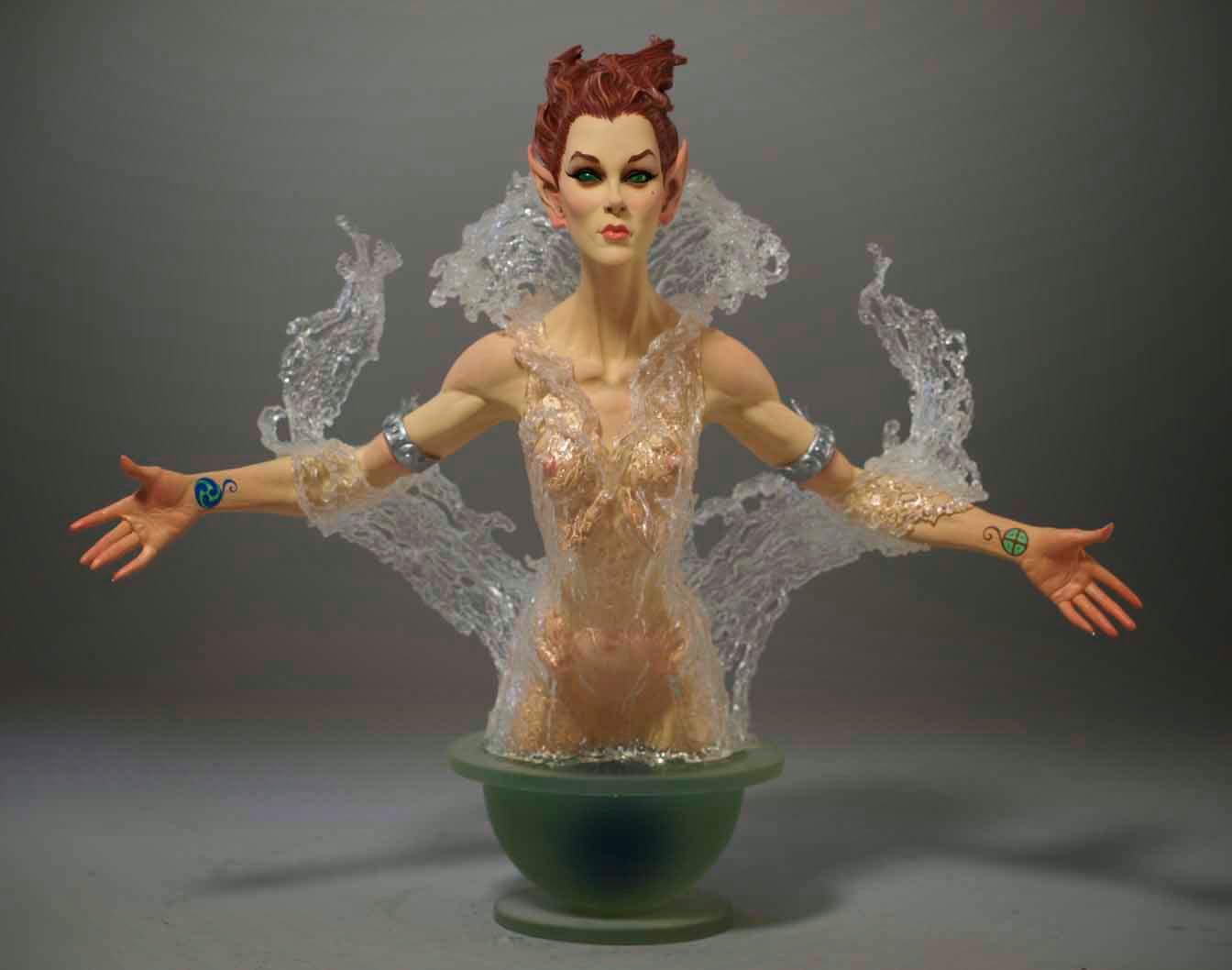 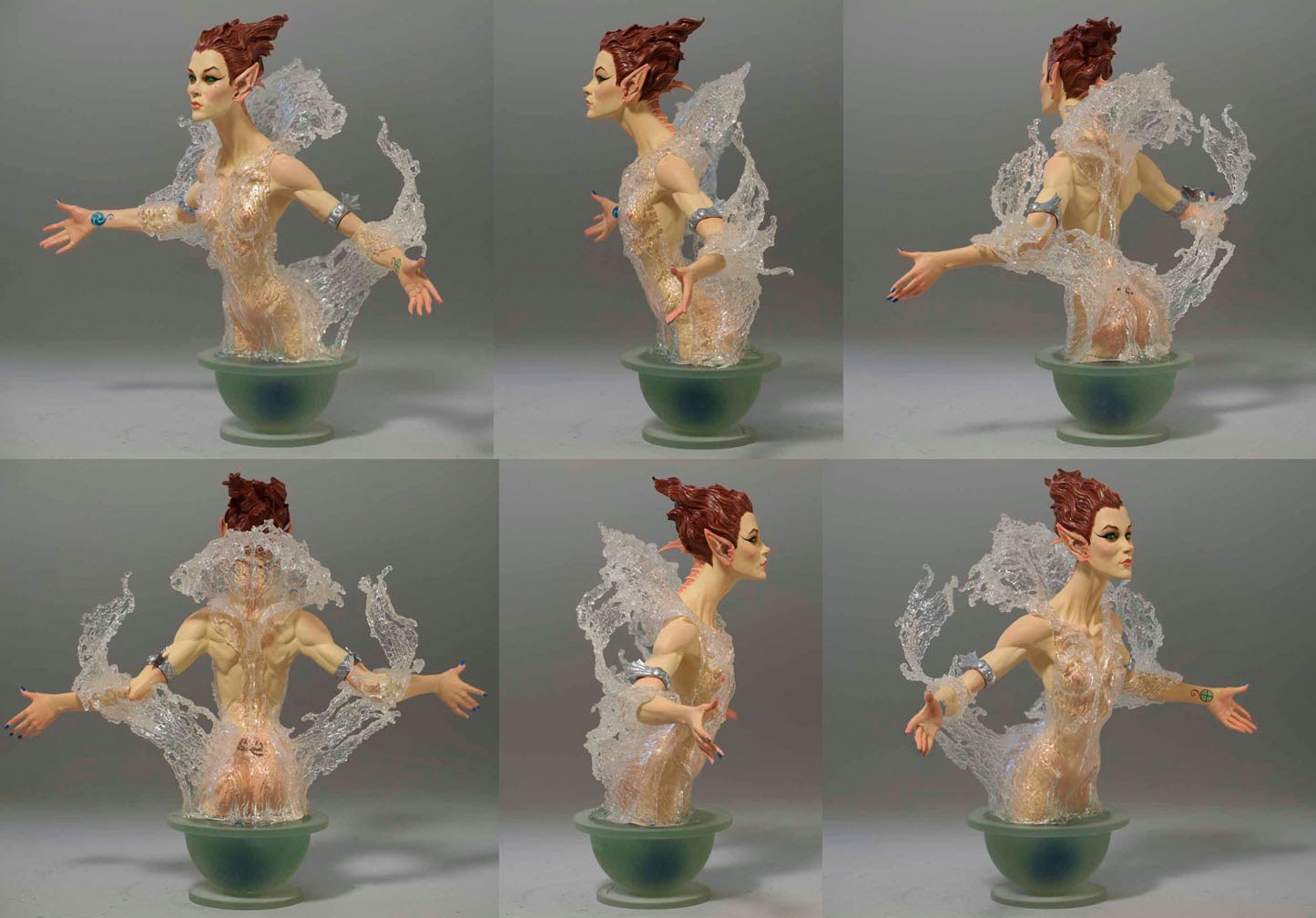 Water Nymph Two will be seen with some of my other work at the third annual Maleficium Dark Art Exhibition a Kosart Studios and Gallery, November 2nd through the 30th, in Westmont, Il. 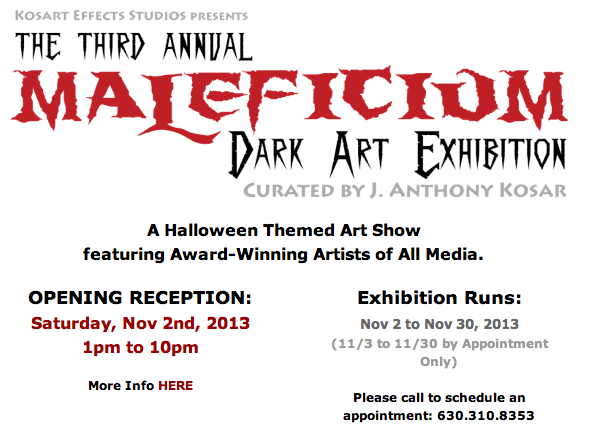 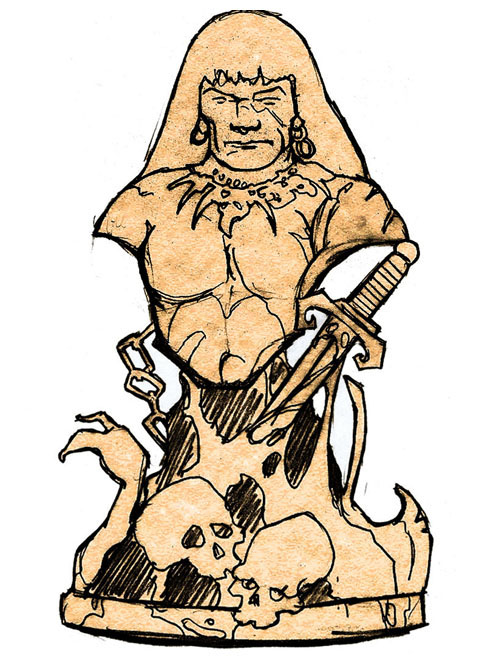 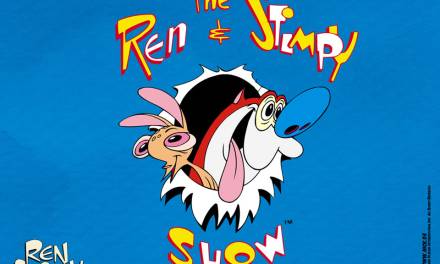