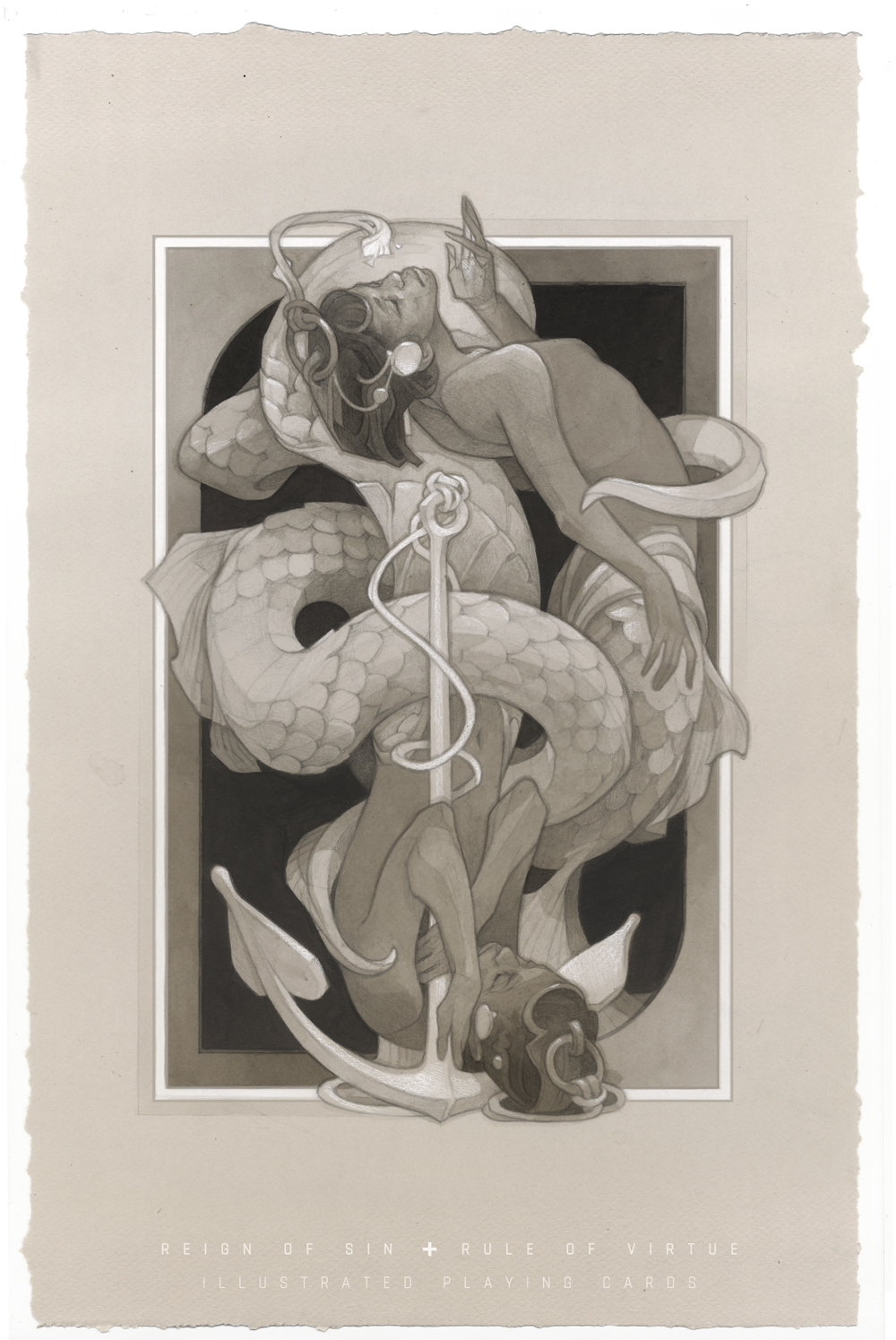 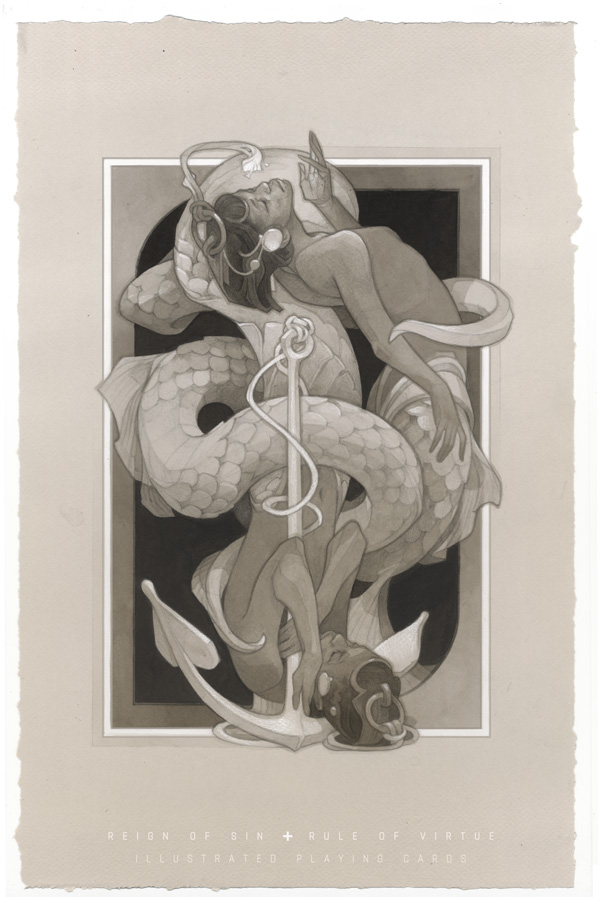 “In my vision, I stood with my companion on a terrace overhanging the great falls that form the tumultuous crossroads of the northern rivers. The majesty of these falls, much proclaimed in the tales of other travelers I had encountered on my journey, had not been overstated: the white waters hung like a veil from the curving brow of the world; the mists thrown up from the tumult of their descent brought forth verdant cloaks of moss on every crag, and cast shimmering halos into the air around us.

It was spawning season, and the rushing waters below us boiled with the bodies of a thousand silver fish battling their way upstream. Many of these were met with instant death at the jaws of heavy-mantled bears, who had put aside their usually solitary natures to cluster cheek by jowl across the lower falls. For any fish that survived the gauntlet of the bears, countless sharp-beaked gulls wheeled in the air around us, waiting to snatch them from mists of the upper falls and tear them to pieces midflight. The jagged rocks at the foot of the falls, a dizzying distance below, were pink with blood and glittering with scales.

A small girl, who had strayed from her family to join us on our stretch of terrace, recounted for us in childish tones a charming legend regarding these fish, which told how the ones who survived their trials and reached the top of these particular falls would, by way of divine reward, be miraculously transformed into dragons.

‘The story mistakes the order of things, as stories often do,’ my companion called to me over the roar of the falls as the girl continued on her way. ‘Those ones’ – and here he indicated a distant point in the landscape, almost at a level with our terrace, where a scant few glittering bodies crested the zenith of the falls and vanished into the peaceful waters of the river beyond – ‘Those ones only ever reached the top because they were dragons all along.'”

—from the transcribed visions of the Light Prophet. Read more at www.reignofsin.com.

Last time, I talked a little about the art of the do-over — painting the same thing twice (or, horrors, three times) just to get it right.

As luck would have it, my very next painting turned out to be just such a do-over! Not wanting to waste such a stroke of good timing, here are some notes on how, exactly, a “first final” begins its slow death, and how “second final” is gloriously reborn from its ashes. This piece is the Jack of Diligence, the very last (!!) of the 24 face cards for my ongoing playing card project, Reign of Sin — a distinction that felt more than worthy of a second round! 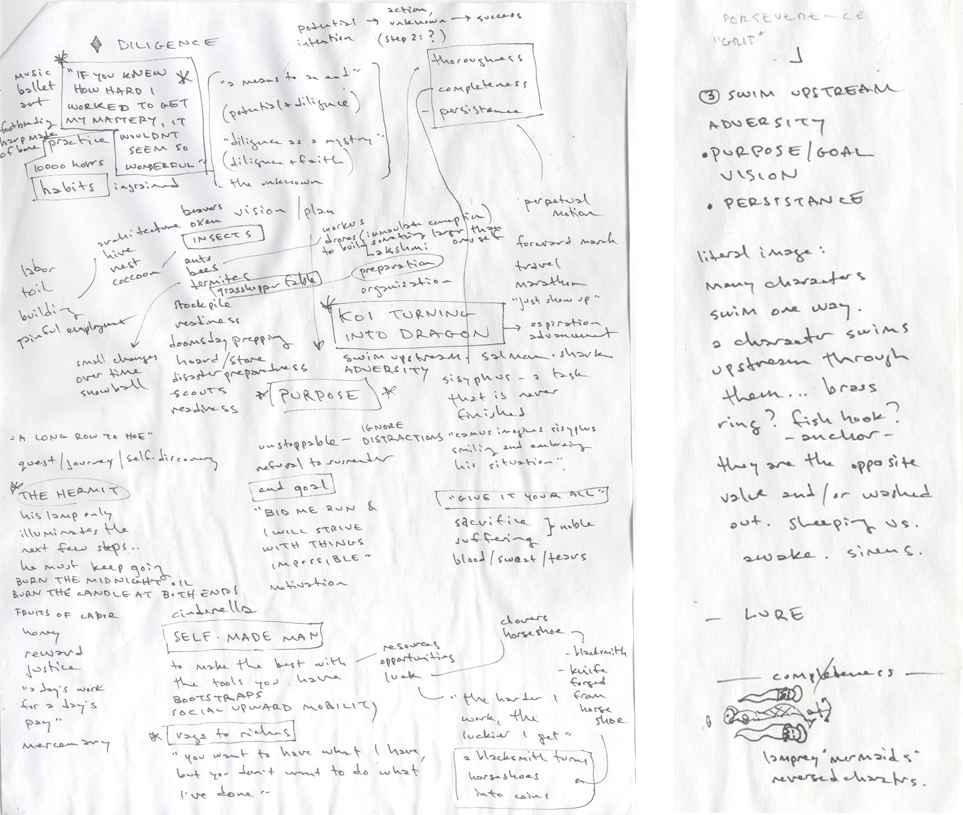 This piece started out promisingly enough — like most of my work, I hashed out the concept through an idea map (check out this post for more info on how I incorporate these into my process!) This time around my idea map (above) was a fruitful one, suggesting not only a coherent theme for the image, but also some likely visuals…
. 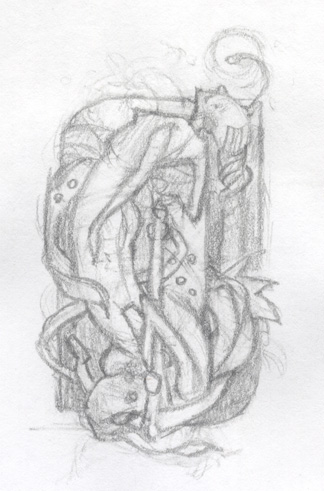 …and my thumbnail sketch, while not overly sophisticated, gave me a general idea of how I was going to incorporate all the elements I had in mind. But beware! Translating a quick-and-simple thumbnail into a more fleshed out sketch is a perilous stage of any piece, and I’ve found that this goes double for my playing card pieces, which require me to fit a lot of content into an extremely restrictive layout, while maintaining a clear read even at the tiny size at which they’ll end up printed.
.
I really can’t afford to be “checked out” during this part of the process but sometimes, inexplicably, I am. That’s when things start to go off the rails…
. 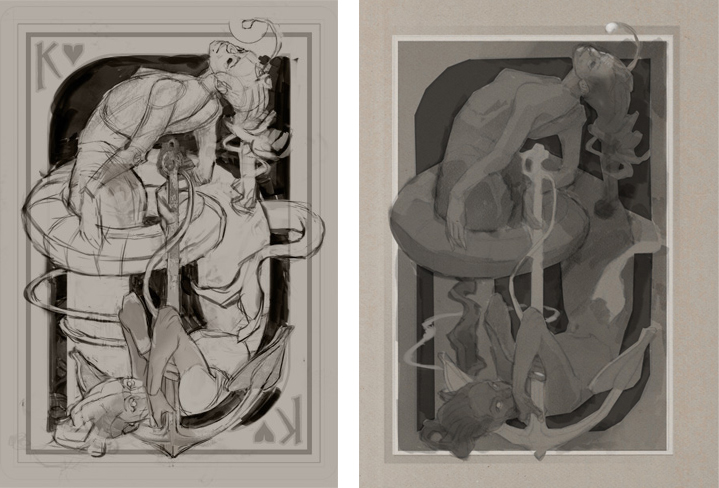 Above left, my finished sketch. It’s certainly not my most compelling work but hey, they can’t all be #1, right? Often when I’ve already invested a good deal of time into a sketch (and as rough as this one is, it still represents many frustrating hours of drudgery at the keyboard) I’ll try to convince myself that it’s working, even if it isn’t. As such, the problems with this sketch didn’t trigger any real alarm bells for me… because I didn’t want to hear them.
.
Looking back with the clarity of hindsight, though, the sketch has a lot of issues: the near-tangent between the upper character’s face and the card border; the stiff poses (if mermaids can’t be sinuous, what can??) and anatomy that’s a bit too broken even by my own lenient standards.

On top of that, I’ve really set myself up for failure with the value design (above right): both dark-skinned characters are framed against a dark background — guaranteeing they’ll get lost at card size. Similarly, the one thing that REALLY needs to read as bright — the upright character’s anglerfish lure — I’ve inexplicably placed against a light background. If you squint at the image, most of the attention-getting high-contrast areas of the piece are in unimportant areas like the shaft of the anchor, the fish tail, etc.

What I SHOULD have done is take a step back, let it sit for a few days, and start over with a fresh set of eyes… 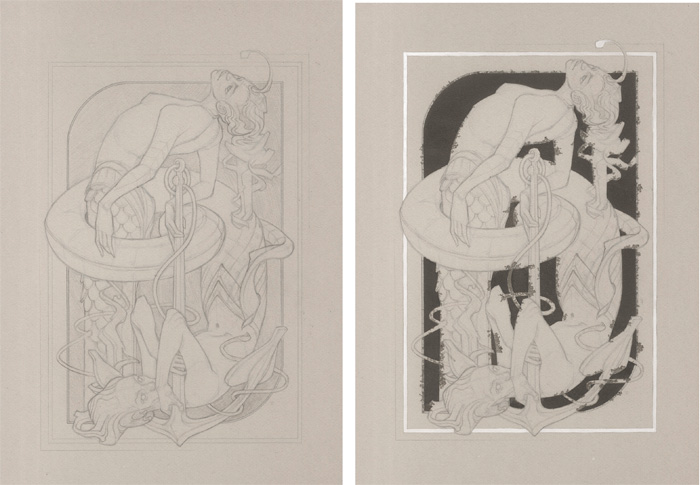 …but, instead, I forged ahead. Above, blithely beginning work on my doomed painting; I wanted to use airbrush for the black background, a la my Piranesi painting, but for unknowable reasons the adhesive in my frisket film failed, causing the ink to bleed over edges of my finished pencil drawing, above right. I should have taken this as a sign from the gods to turn back, but instead I forged ahead, mumbling to myself, “I can fix it in post!!”
. 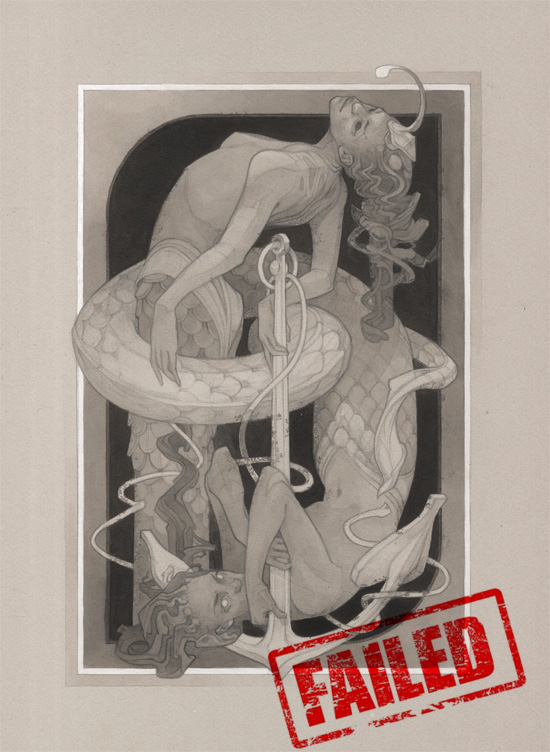 But, after a few more hours of polishing the brass on the Titanic, I’m forced to admit that this painting isn’t worth saving — at this point, my time is better spent designing something new from the ground up rather than trying to push this one through to an unsatisfactory final.
.
Looking back on this first version of the painting — and noting just how early in the process I made the majority of the missteps that would eventually sink the final — is a good reminder of why always put so much emphasis on the planning stages of a piece and, above all else, avoid rushing through them. On the bright side, having a failure like this behind me is kind of like a superpower when it comes to the second round: I can see (most of) the disasters before they happen, and have a better picture of what will work, based on what didn’t work.
. 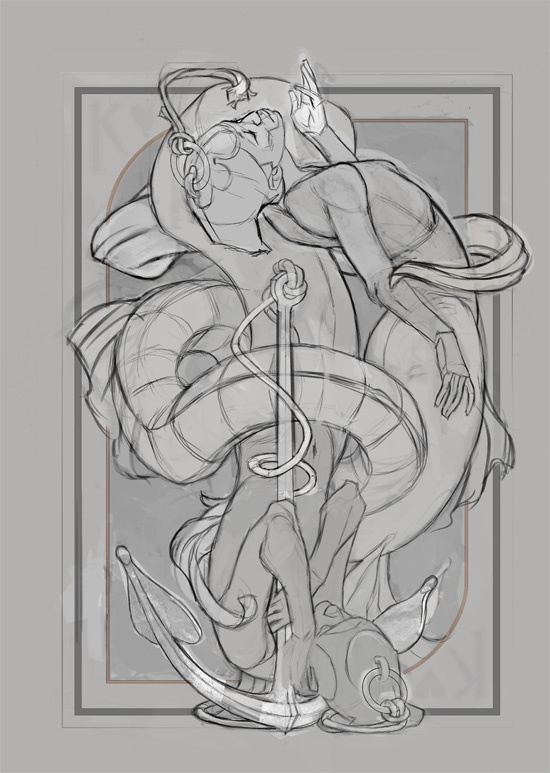 For my second sketch, above, I’m doing all the things I should have done the first time around. I’m arranging the mermaid coils to fill the composition more elegantly, while deliberately shaping them to frame both dark-value faces with large light-value shapes. I’ve rethought the poses to better convey the story I’m trying to tell, and made some big corrections to the anatomy (walking back my unconscious habit of breaking necks just to give the viewer an eye-level, 3/4 view of every face that they probably didn’t want anyway). Even the decorative details have more intention this time around — the headdresses chaining the reversed character to her fouled anchor, and the cut ropes of the upright character forming her anglerfish lure.
.
At last, with my new sketch hammered out and with the benefit of the hard-won clairvoyance that comes from making a mess of things the first time around, the painting process can finally unfold without further incident.
.

One of the reasons that I’m open with posting my fuck-ups for all the world to see (at least, the ones that find a happy ending in a Version 2) is because there’s a tendency, as an artist, to imagine that other people’s art comes more naturally to them; that while you are struggling with a painting, hating everything about it, and possibly crying tears of frustration on or near it, the artists you admire are engaged in an effortless dance of creation with their own work.
.
I try to disabuse people of this notion as much as I can. For my own part, I have erased holes in my paper just trying to draw a face — any face that looks even remotely human will do! — more than once. I’ve lined wastebaskets with a lot of half-finished paintings that started as great ideas and somehow turned into garbage on the easel. This is how do-overs are born: learning to listen for the nagging voice that tells you that this thing could be good, but isn’t.
.
Everyone makes messes and bad decisions  — in art and in life. But if you’re able to train yourself to keep an eye out for those messes, to name them and fix them when you find them instead of letting them ride  – that’s how you become a dragon.
.
. 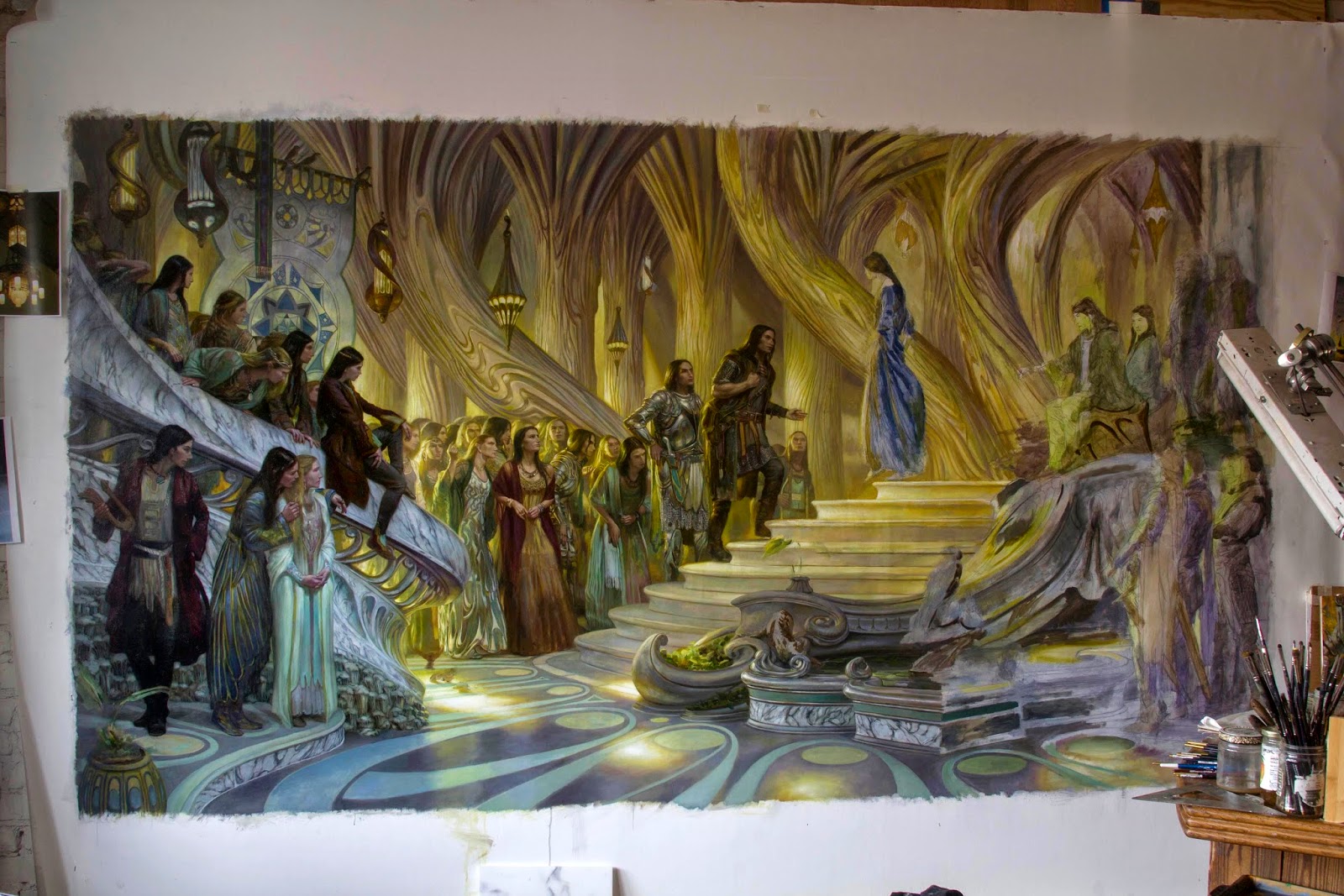 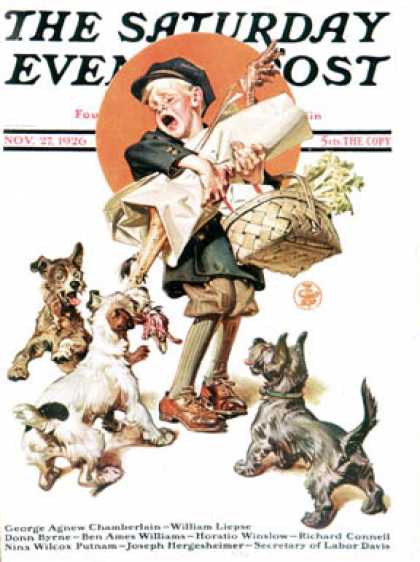 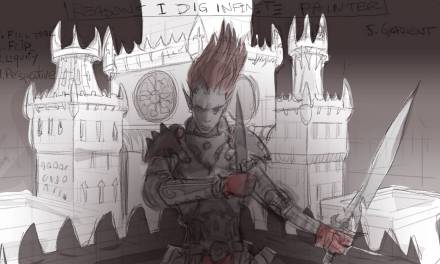 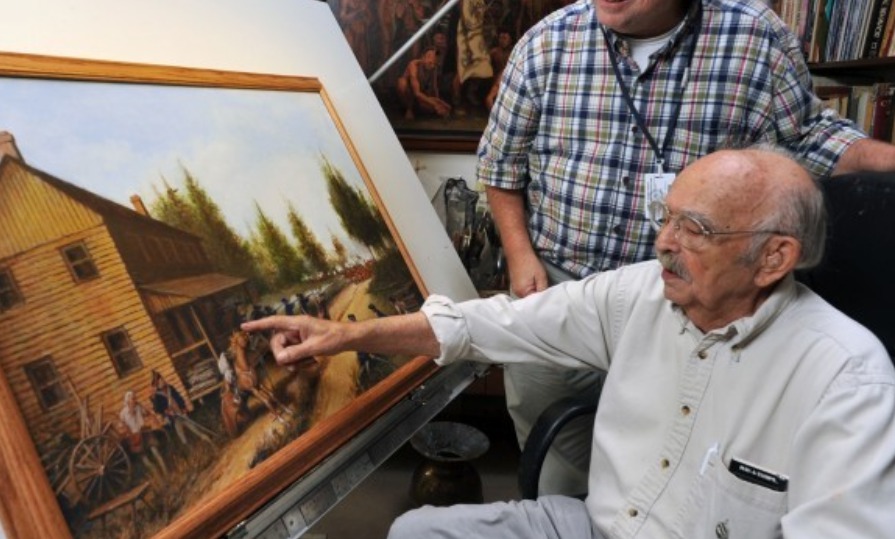