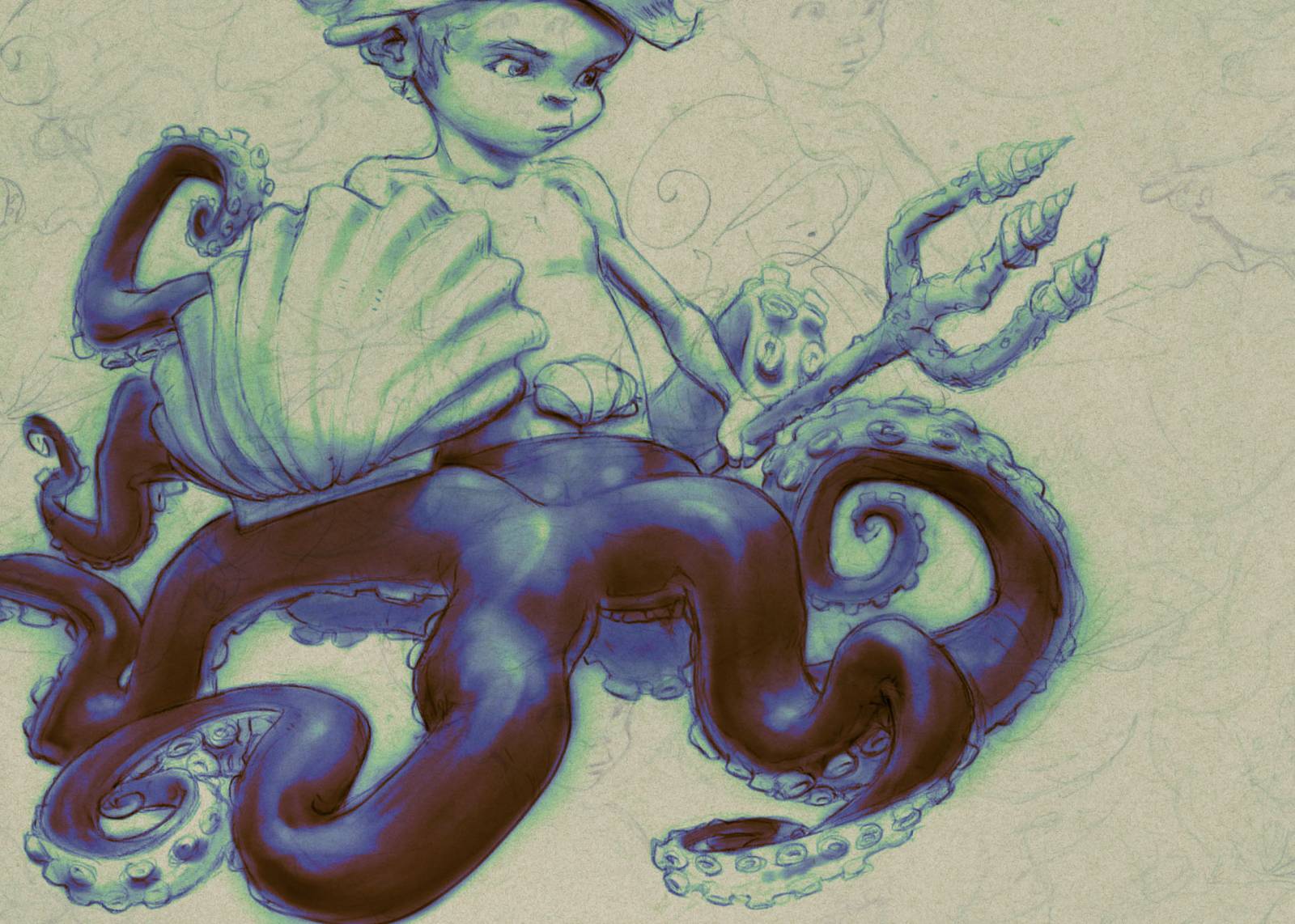 We have a tendency to keep things in our pictures because we’re proud of them, we worked hard on them, they turned out well, even if they may not serve the greater good of the piece. Here’s an exercise that might help you work past that limitation, and give you some insights about yourself, your art and your process. But first, a little background…

Ok, like everybody, I’m writing a novel, with pictures! 🙂 Maybe someday I will finish it. My book group buds tell me it looks like a kids book on the outside but the story on the inside is more adult (so basically the opposite of me).

Books, like paintings, normally have a “rough sketch” phase, which in writing is called the “rough draft.” It’s not polished or even remotely publishable. You just have to get your idea down, even if it’s full of plot holes, or if some entire scenes are abbreviated to “they fight and character A wins” if that’s all you know about that scene at this stage. Finishing your rough draft is an important milestone.

So I was surprised to hear, on a writers’ podcast a couple of years ago, an author say that once she finishes the rough draft—she throws it away! She tosses it and starts over, the notion being that whatever she remembers will necessarily be the important and impactful stuff. Maybe she was happy with none of it, so rather than struggle to fix it, she washes her hands of it entirely (which is far more effective than Purel, btw).

This author repeats this process a few times before locking in a final draft, and then proceeding to polish / edit. So I thought, why not adapt this to making a picture?

The idea was I would first do a thumbnail to settle on an idea, then spend 15 minutes on a rough sketch, then put that away and start over. (I didn’t toss it out, because when I was done I wanted to have them for comparison). Then I’d start over with another blank sheet of paper. I used printer paper so there was no “preciousness” associated with these sketches. 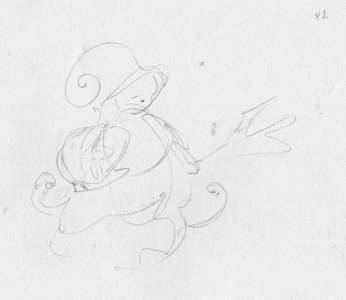 MOVE UP With each successive drawing, partly I’d be trying to remember what I’d done before, but since I had to redraw the whole thing anyway, there was not much incentive for trying to preserve something just because it had been done well. 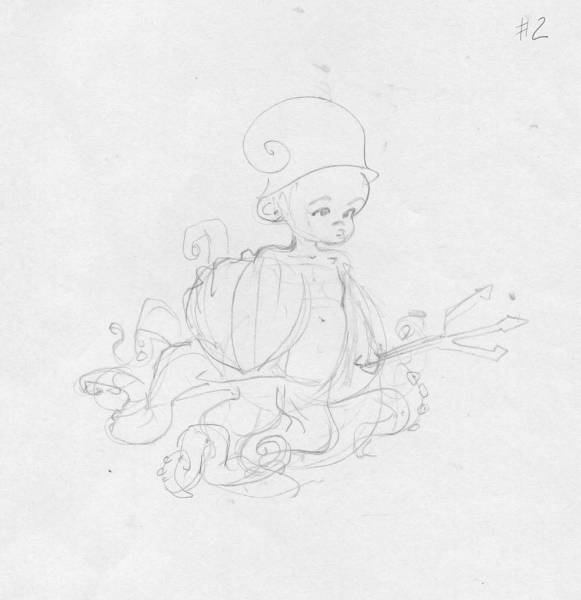 I struggle a lot in the rough stages of making a picture. Rendering is quick and easy for me, but composition, gesture, pulling together an idea, these are often painful. It’s like my free-thinking creative brain and my “this is what the image needs to specifically communicate” brain can’t come together. So this is the shakiest territory for me. As such, when I get anything that works, I tend to want to preserve it even if it may not be best for the overall picture. This exercise took a lot of courage for me. 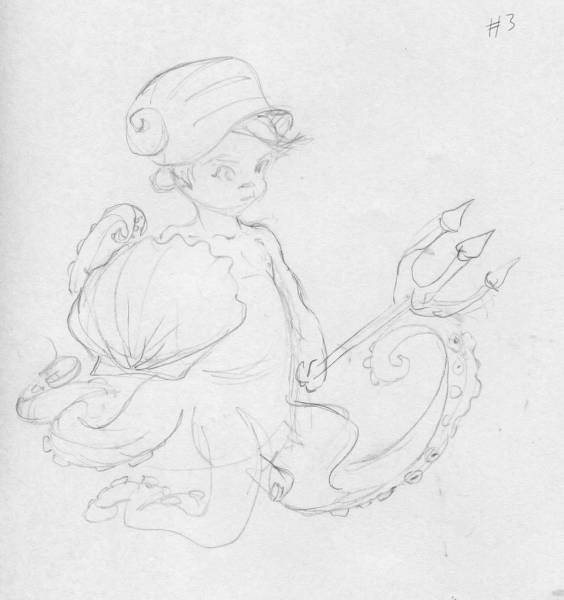 Why? It’s just some cheap printer paper and a few drawings no one ever needs to see. But making a picture, like all art forms, is a performance. And we can get stage fright even when there is no audience there. That feeling of exposure, of risk, that this is important is critical to putting on a good performance, but it also can cause performance anxiety.

Because for many of us the pictures we make are us. If they suck, we suck. Whether you are a professional artist, a hobbyist, or someone who doesn’t draw at all, but sits down and makes one picture, that picture is a perfect mirror of you at that moment. 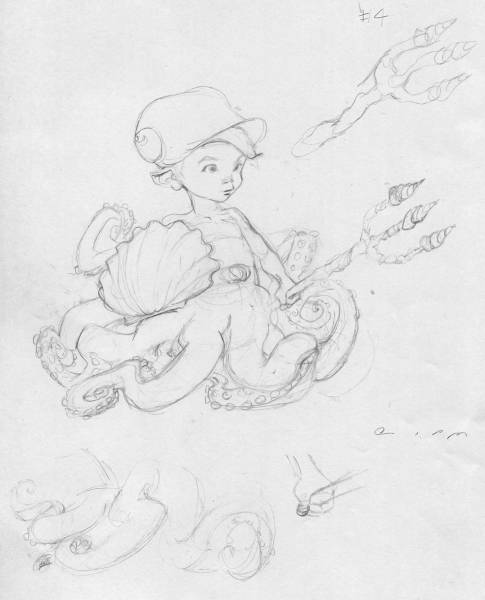 One specific that that happened was that in drawing the same thing over and over (like the tentacles), I got very fluent with it, so I could draw them more and more directly, with fewer marks. So a basic fluency developed that allowed me to create marks that were lively and communicative automatically. I think the fourth and fifth drawings look pretty good considering there is no under-drawing to speak of. 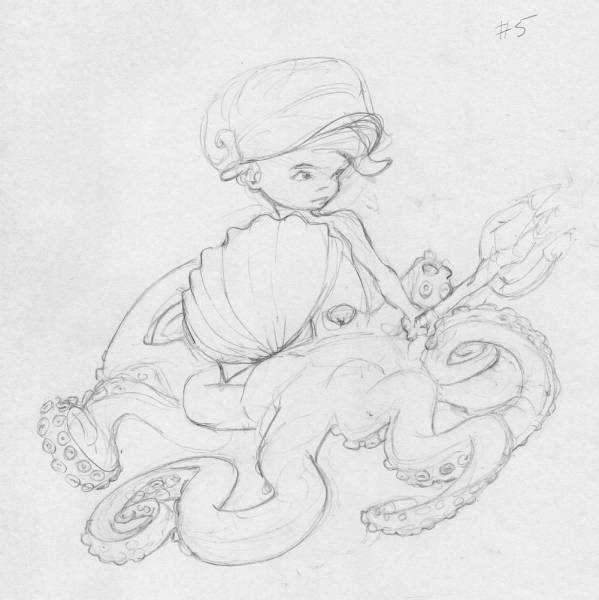 Sometimes we turn in a finished work there is little or no reaction from the client. This is disappointing, not because we are seeking praise or gratitude, but because the only measure of our art is whether it had an emotional impact on the viewer. Whether it caused an emotional reaction, a feeling. 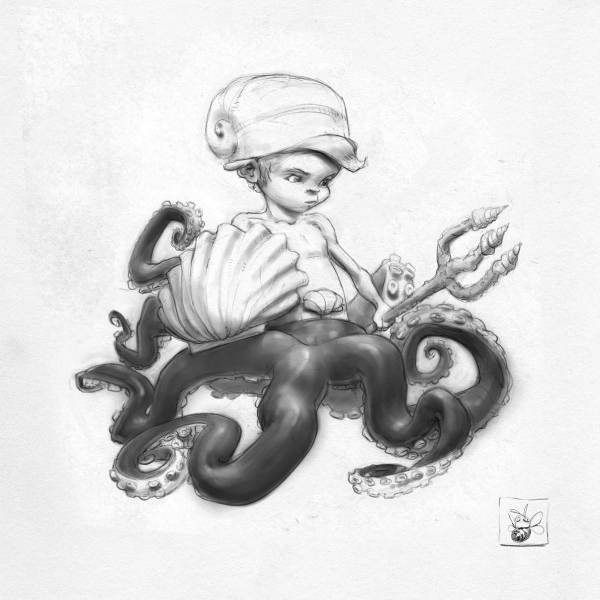 So I was tickled when another artist, Giovanni Tomas was inspired enough by my drawing to make this sculpt from it: 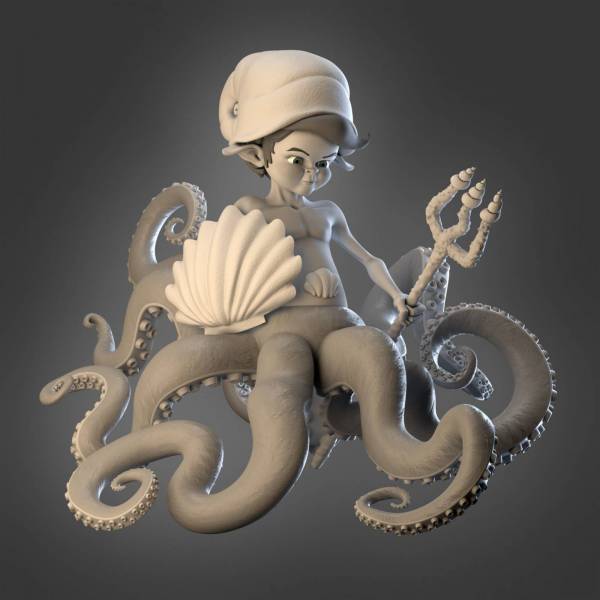 Octoboy sculpt based on my drawing, by Giovanni Tomas. 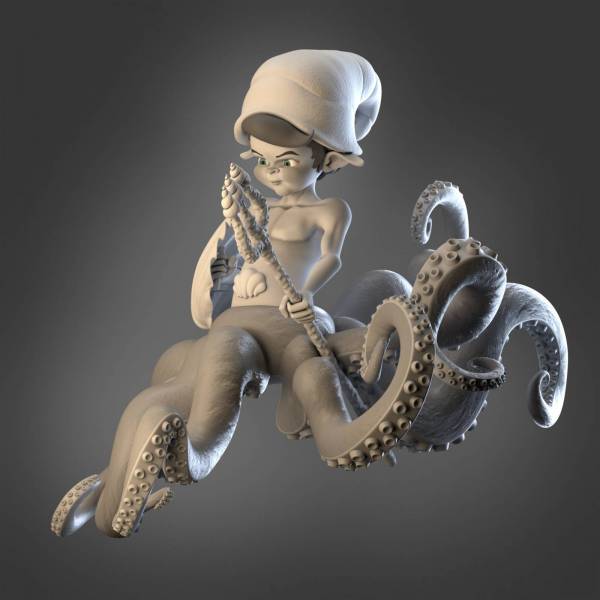 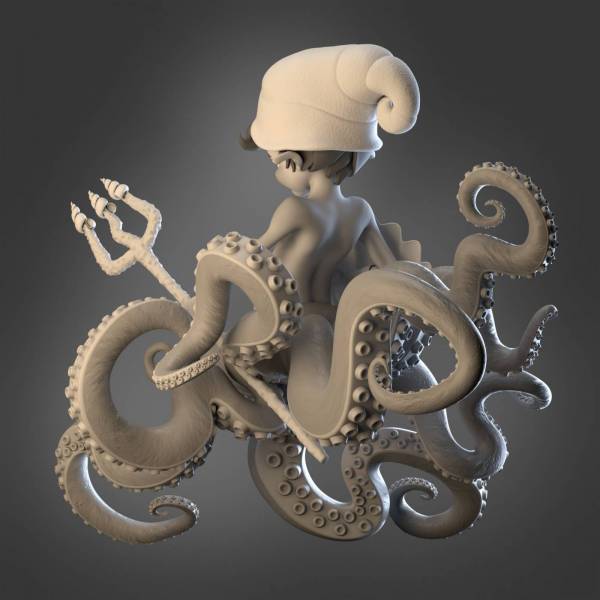 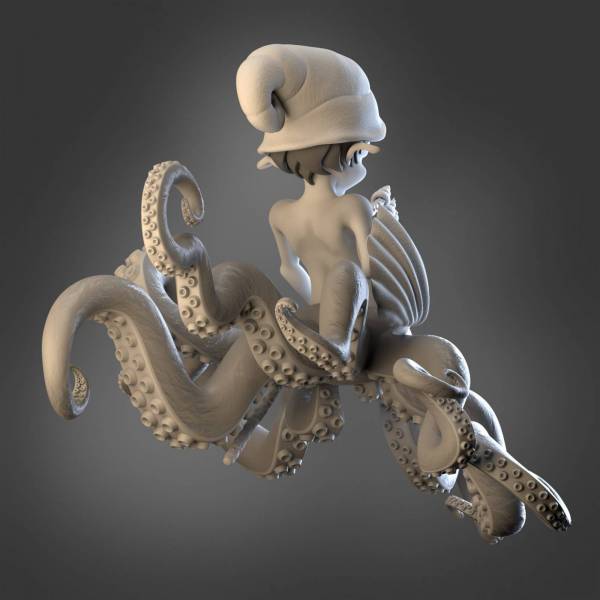 And here’s a video of the sculpt.

What did I learn from this process? For one thing, I got a lot more confident in my drawing abilities, because rather than carefully preserving little bits that I’d drawn well, I had to redraw everything, and was relieved to find that this was not a problem. I think I was previously underestimating how much baggage that was. Now I know that the idea, or AN IDEA will come out, no matter what, and it probably will get better from a complete redo (though I don’t think that is practical as a matter of course).

I also think with this first exploration I think I got locked into a fairly uninteresting pose, and only moderately interesting character. I was so focused on the experiment itself I didn’t put much effort into the idea. I wasn’t working on something I really cared about or that engaged me. If I were to do this kind of exercise again I would iterate a lot more broadly, rather than use each successive drawing to simply develop or fine tune the original idea.

This exercise was super hard (for me) but felt good in the long run. Like working out, I guess. Give it a try and you may learn something about yourself too. Trying things that we may never have thought of ourselves, or which are uncomfortable and off-putting is one way we learn and grow. 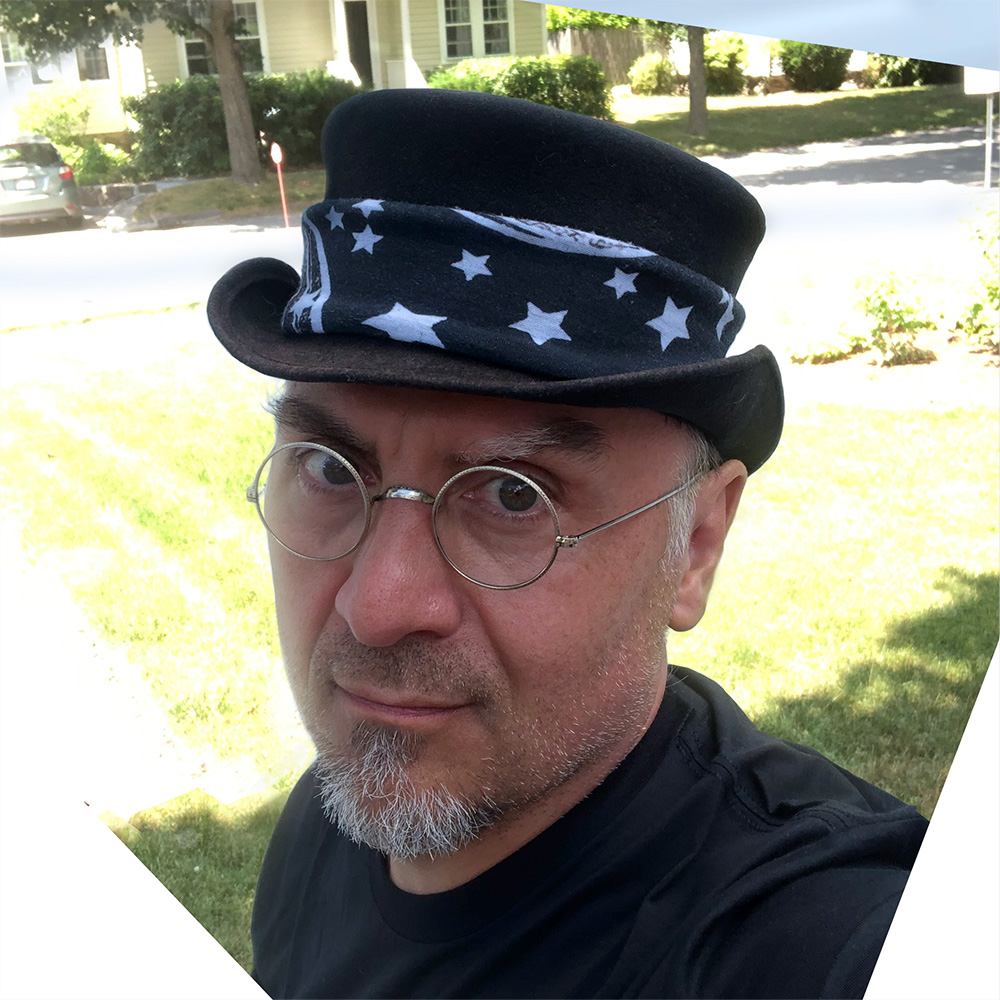 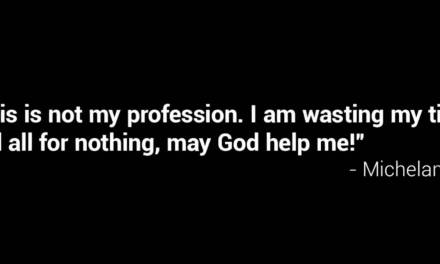 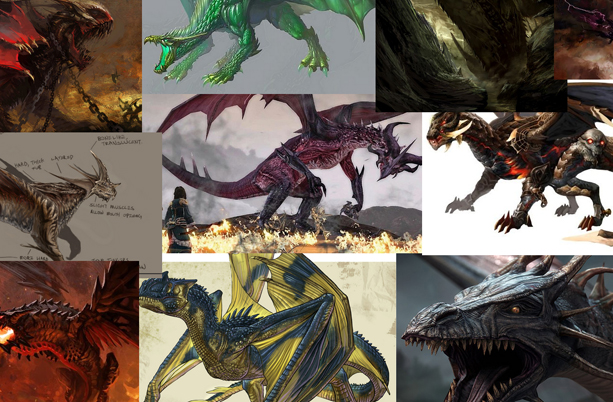 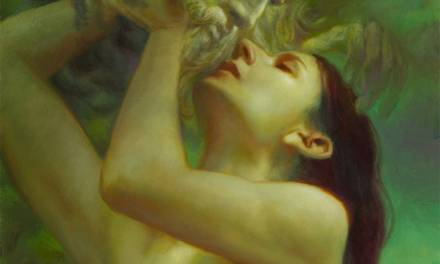 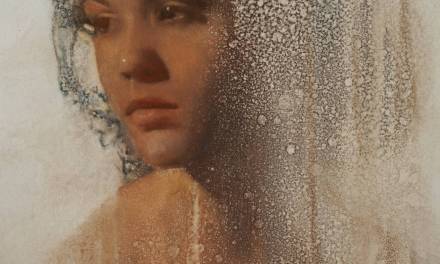