Thanks to everyone who decided to take part in our first ‘Crit-Submit’. We received close to a hundred submissions. I looked through all of them, and they varied greatly. Some of you are just starting out, whereas others of you are obviously at a professional level. I really enjoyed all of them regardless, and appreciate everyone’s interest.
A few of the Muddy Colors guys were a little apprehensive about publicly criticizing someone’s work, so I decided to do this round. It was also my big mouth that spouted out the idea in the first place, so I guess it only fair that I be the first to step up.
The piece selected belongs to Brady Allen. 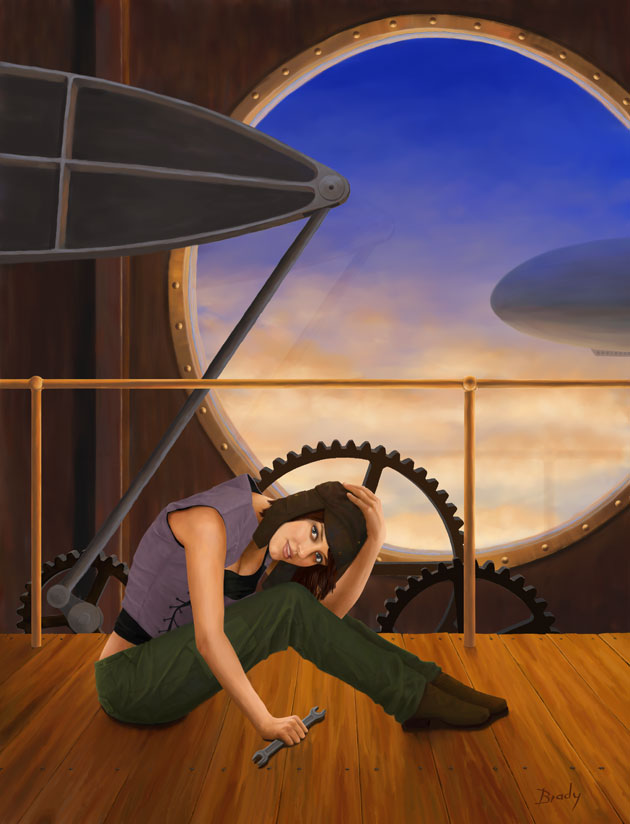 A few things struck me as needing improvement right off the bat. Compositionally, the piece is quite empty. The figure does not seem well grounded, and overall, the image is a bit lacking in narrative. On the upside, all the makings of a really good piece are here. The face is beautifully rendered and the anatomy is spot on… so it really only needs a little tweaking.
Firstly, let me clarify ‘narrative’. By definition, the purpose of any illustration is to tell a story. In many cases that story is quite obvious, like a big fight going on or something. Other times, the story is a lot more subtle. Take this painting by Donato for instance. The ‘narrative’ is an internal one. Despite all the super cool stuff in the background, the real story takes place in the woman’s mind. We immediately focus on her, and put ourselves in her position. Temporarily experiencing a slice of her life, we wonder ‘What is going on in her head?’ But in order for a picture to do this effectively, it needs to entice the viewer into her world. We need cues that help us feel like we know what her world is like. That is the purpose of her environment.
In Brady’s painting above, we assume she is a mechanic simply because she is holding a wrench. But that doesn’t really tell us much. I want to know… Is this her daily job? Did her work day just start, or was it a long exhausting day? Is this gear something that requires constant maintenance and perhaps troubles her regularly? Is that blimp in the background part of her fleet? These are the things that help a viewer believe in the fantasy, and they are where your -true- narrative lies.
The first thing I did when painting over Brady’s piece was drop a shadow in the corners over everything I felt wasn’t important. The top-left of the painting is attracting a lot of attention, and it doesn’t need to. By darkening up these areas, we keep the focus on the character, and we also add more mood to the piece. I also dodged the sky behind her head for these same reasons. 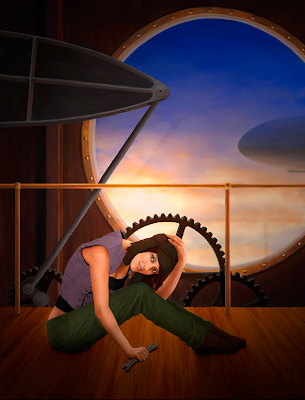 From the start, the gear directly behind the girl’s head was the focus of the piece. It had the highest contrast and sharpest edges. Reestablishing the values in the previous step helped this somewhat, but not entirely. So I decided to blow-out the gear a bit, and add some of that newly established light source on her body as well. I also added a shadow near her hand so that it seemed better grounded. 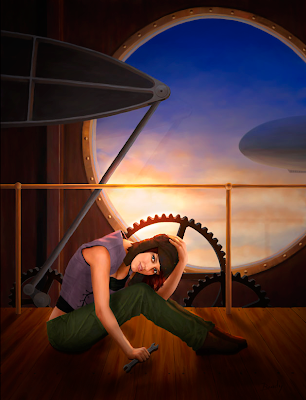 Once I reached this stage, I could really start to see what the piece needed. Mostly, it just needed ‘stuff’. There is too little to look at, so nothing really holds the viewer’s attention very long. Those big cogs are large, uninterrupted shapes, and so they command a lot of attention. By adding a LOT more overlapping gears we can add some additional interest and break up those big shapes, thereby making her face and the window the only real resting spots for our eyes. It also presents the opportunity to have some of these new gears point to the character’s face, further drawing our attention to her, and helping balance out those other angles. 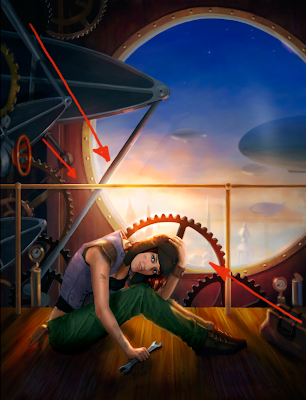 Everything else was added for the sake of narrative. If she is a mechanic, make her dirty… put some gloves in her back pocket… make her vest look a little more industrial… give her a tool bag. Help us experience her life. Also, if you’re going to have a great big window there, you might as well put something interesting outside of it. By adding a few buildings and a lot more blimps, you now indicate a whole society. The viewer can better fill in the blanks about what her world is really like. 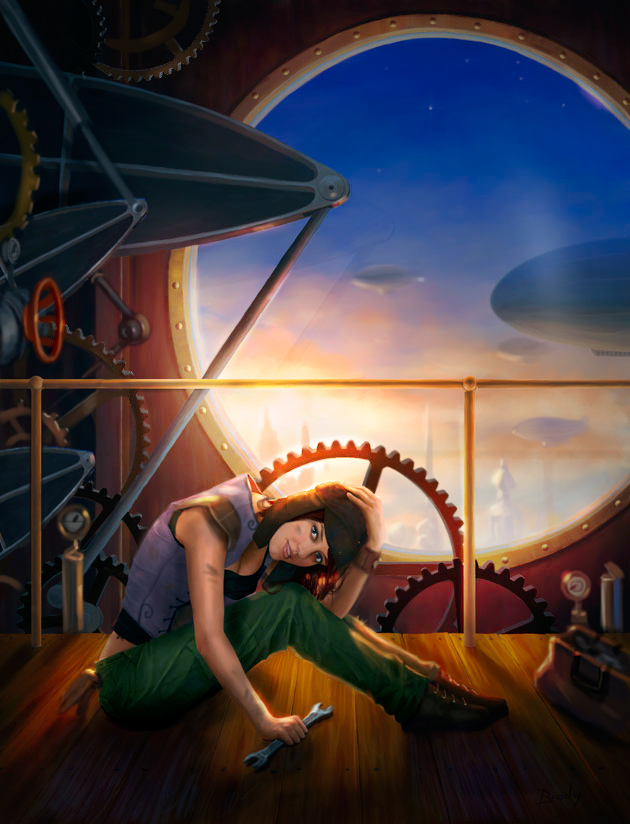 Normally, I would have added some decorative elements to the window, but that large empty space is an Art Director’s wet dream. It is the perfect solution for type placement, so I decided to leave it as is. Aside from that, a little tweaking of the color (which I felt was too warm in the shadows), and that’s about it!

Thanks for being our first guinea pig, Brady! I hope you find it more helpful than discouraging. The same goes for the rest of you. If you enjoyed the post, let us know, and we’ll try to do it again. If there is something in particular that you’d like to know that I didn’t discuss, just ask.